Apparently all I had to do with ask a question about adding a neighbors laying hen to see if it would jump start mine and today I get my very own first egg!!!!!!!!!!! its so cute and little!

My due date for my baby is on monday and for the past 2 mos I've been saying its going to be a race to see what comes first, the baby or the egg... the egg won! I am so excited!

Ya know how you look in EVERY day and see nothing? and then one time you look and much to your surprise there is a real egg???? I was in shock!!!! I'm too excited!!

I'm going to take pictures later when the 2y old is in bed... but its a little light brown egg.

I have cinnamon queens and buff orpingtons... my guess is the buff because she's been acting "eggie" for weeks now

but the cinnamon queen grew big wattles this past week so who knows!
Last edited: Oct 2, 2009

Dancing With My Chickens

for you and the chicken!

I'm so excited for you. Congratulations on your first egg and your newest edition to the family.

Congrats on the egg-now for the baby.....woohooo!!! Here's wishing for a speedy and safe delivery! Good luck and God bless!!

I was just shocked to see it!!! I still can't believe it!

So its really light brown... do you think that means its from my buff? a red sex-link lays brown too though, right?

On the left, a brown store bought egg, on the right... the cute little egg from today,... awwww. I don't know if I'm ever going to want to eat it, I feel like I should frame it or something! LOL! 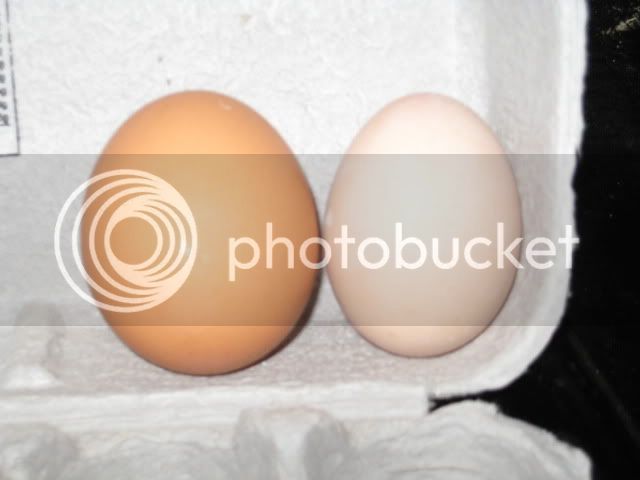 I haven't had any chicken eggs yet, but I know just how you feel...I breed Budgies and Cockatiels, and it's always so exciting! I finally got eggs from my Lutino pair

Come on chickens, your turn!

Congrats on the eggs!!!

S
We have our first egg! But who gets the applause?

Was my leg-feathered cuckoo maran picking on its claws?
2