One of my month and a half ducklings had bald spots on her sides... why??

So my pekin she has a bald spot in both her sides. I was gone for 2 days (my family was caring for them while I was gone) and when I came back there is these spots on her. Why??

We are putting triple antibiotic ointment on it for now until we get vetericyn spray. I’m super worried for her because so far today it seems to have gotten worse. We just started putting ointment on at around 5 today. I’m in Fb groups and they said to put ointment and the spray.

Am I doing something wrong? Should I separate her from her sister until I see improvement because he sister picks at it sometimes. I’m so scared for her.

they are inside 24/7 and there is no pets around. I don’t know what’s it’s from! 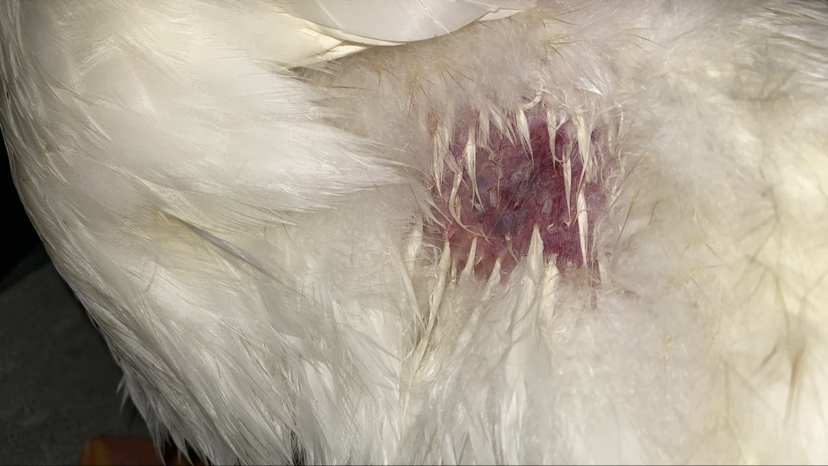 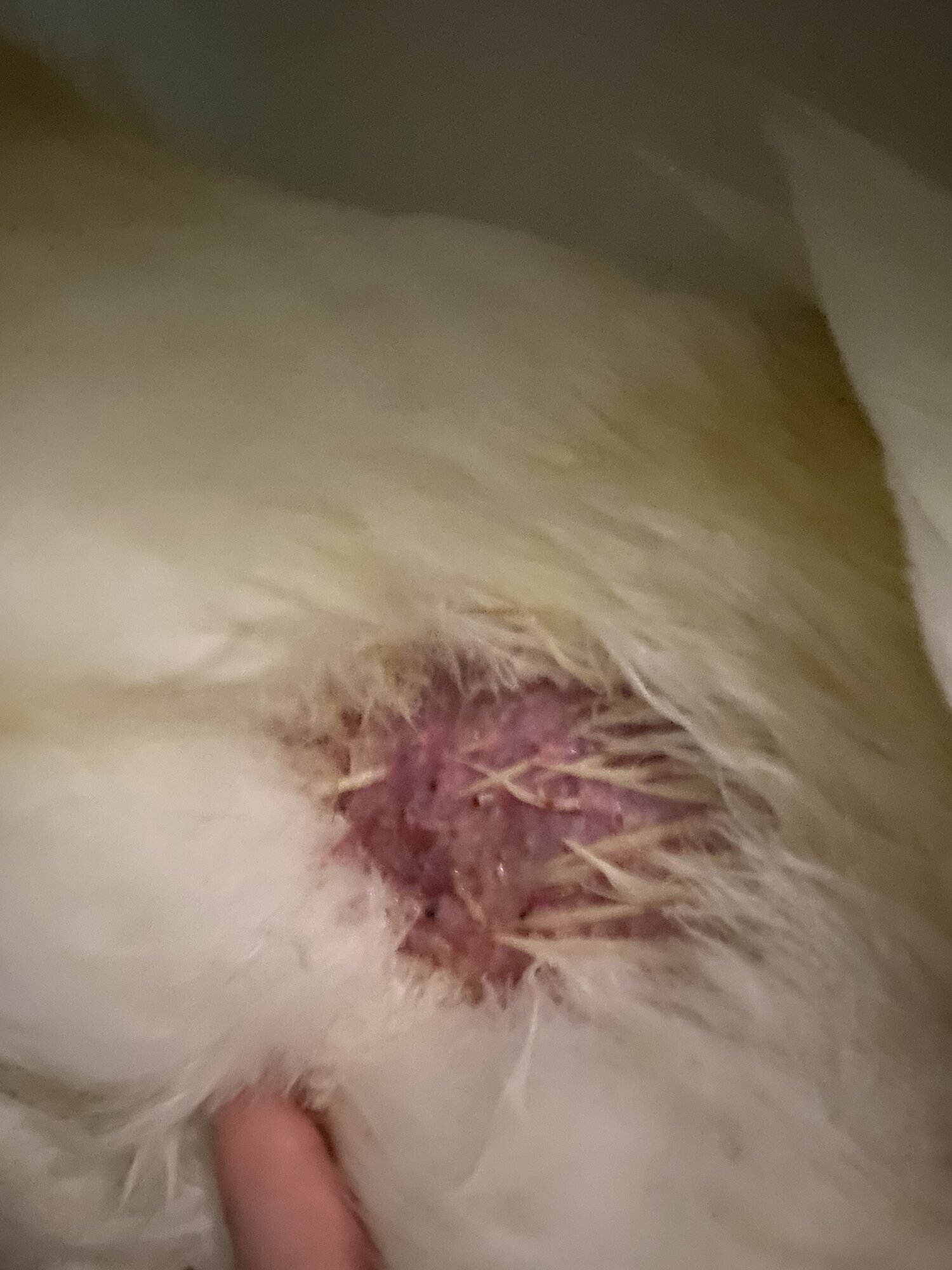 I'm sorry to hear about your duck.

Personally I would separate my ducks if one was pecking at the other's wound. Maybe you can do a "look but no touch" method by putting up a baby gate, or something similar if they are attached to each other to reduce stress.

We have had 2 other members who have ducks that have pulled side feathers of flock members in confused mating rituals.

I haven't had this kind of wound happen in my ducks, but hopefully someone else will be by soon who has experience with this and can help more. @CoriM what did your vet have you do?

You mentioned there is the same spot on the other side bilaterally, correct? Anything she may be rubbing on?

If I zoom in closer it appears the feathers are being ripped out, and given you've seen the other duck already picking at it, it seems likely, and plausible that might be what's going on. Feather picking is most often associated with boredom. You keep these ducks inside? Do they have space to roam around, do they get outside very often?

The environmental problem that's promoting this behavior needs to be changed. Isolating the duck will only offer temporary relief. Once they're put back together who says the bald spot won't reoccur?
C

I would say it's most likely she's having her feathers pulled and you do need to separate them. I could show you very similar pictures of my pekin who started having her feathers pulled when my 5 ducks were about 5-6 months old. Unfortunately for me, I spent several months, including lots of money at the vet, trying to get to the bottom of it, because I didn't see it happening, even though I was with my ducks a lot. You're ahead of the game, but if you only have two ducks you're going to figure that out because obviously they can't live isolated lives. I have a run, and I just run a wire fence down the middle and divide my ducks into groups during the day. They sleep together and forage together when I let them outside, supervised. But even so it can happen so fast and happened just the other day when I wasn't looking for a few minutes. My pekin is still missing feathers on her side, even though it's way better. If you can keep them apart the wound will heal with the vetericyn and her feathers will grow back. The behavior in my ducks seems a mixed up mating type of thing, though maybe it's a dominance thing as well. The ducks were raised together and all get along great, but then when they get by fresh water (typically mating) Penny will lower herself down and then the other duck pulls her feathers. Ugh, sorry you have to deal with this frustrating situation, but at least you've discovered it early and can work on a solution that's good for both ducks.

They are inside they still have fuzz and we can’t put them outside yet. They get to roam around my whole room. What should I add so they don’t get as bored? Thanks!

Well we have 4 ducks! These girls are the most recent members of our flock though. She used to have a ton of fuzz around that area too. We have to order the spray because our tsc only had a 16oz... but I’m also glad I discovered it early. Thank you so so mcuh!
C

Oh yes, I see the baby fuzz now! Since you caught it so early maybe you'll be able to stop the behavior before it becomes a habit. When my ducklings were that age I made a little enclosure in my backyard, with a wading pool, and they spent a couple hours out there everyday. But since it's winter, that might not work for you. Maybe some swim time in the bathtub? Sounds like you've given them plenty of space!

They go in the bath 1-2 times a day for sure once in the morning! This morning her sister keeps picking at the raw place and she made it bleed again. Could she be picking at it because it’s a different color?? Her sis picks at it more when she’s in the bath. But they like showers!! I could maybe fill the bath deeper though because it’s not super deeep because it’s a lot of water too fill.

This is today. I couldn’t see where the missing feathers were yesterday. It’s seems to be getting bigger and bigger. Is it an infection? 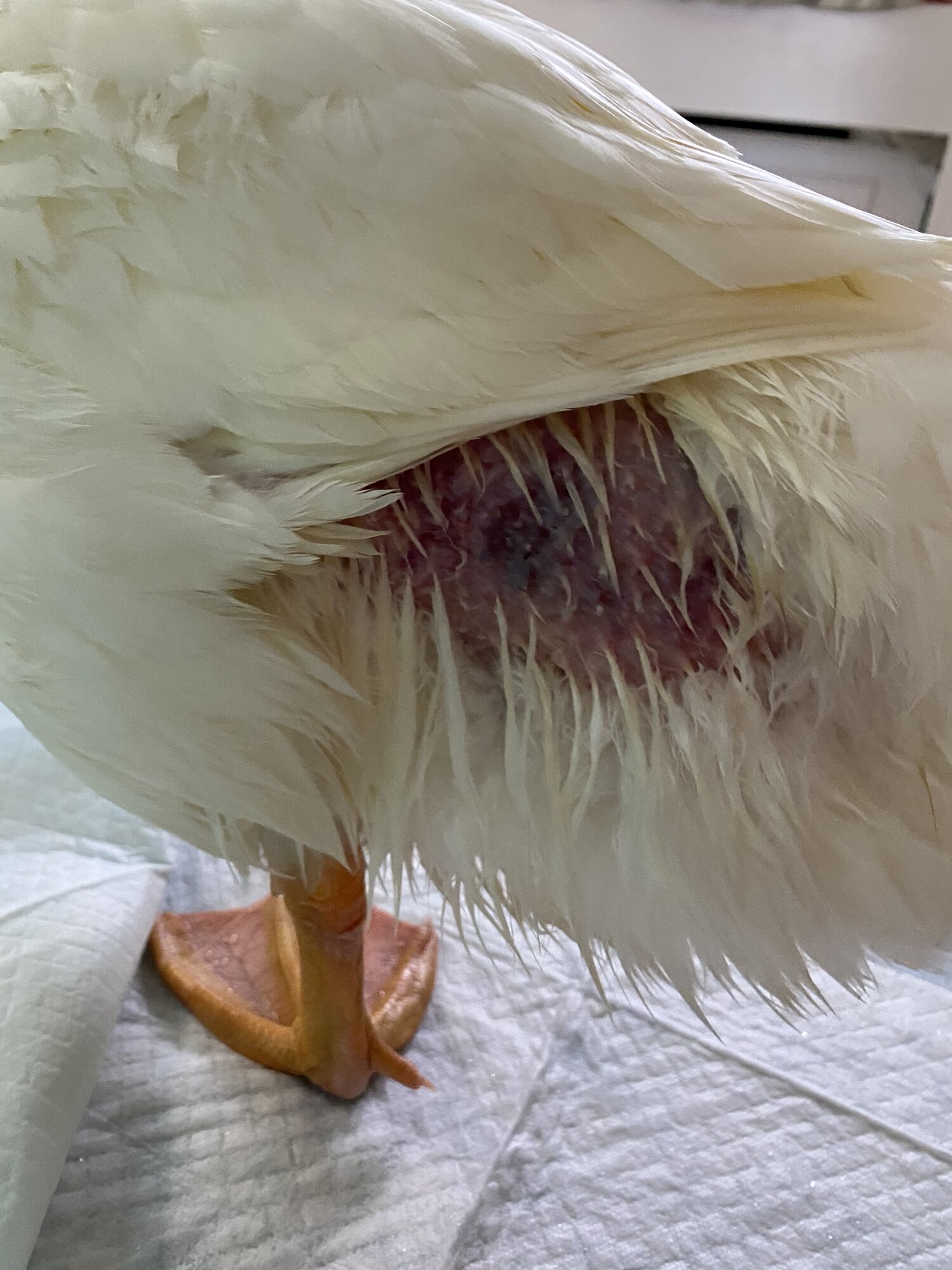 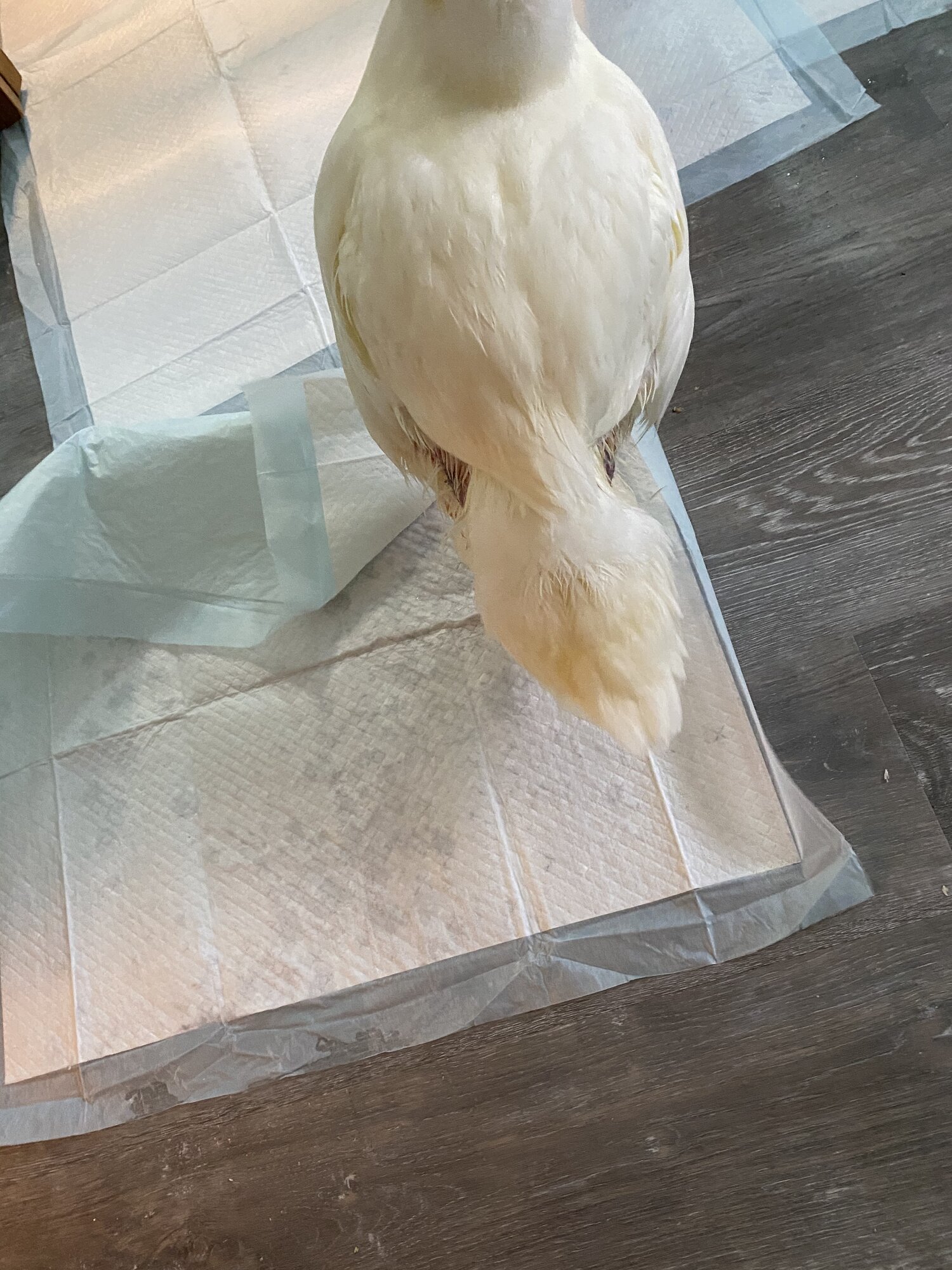 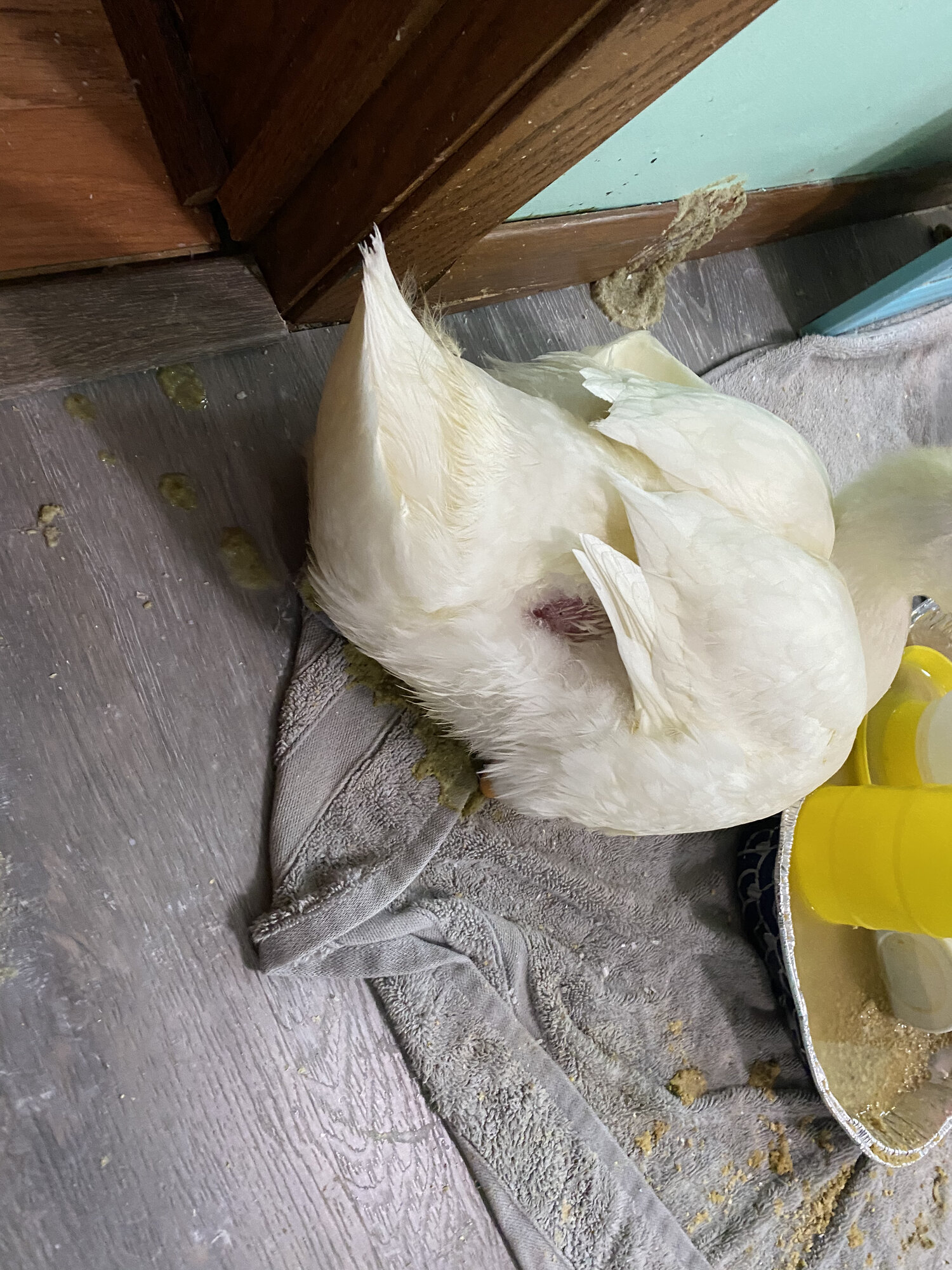 I would not let them bathe together right now. It's possibly a trigger for this behavior.

Duckling with a bald spot

Duck bald spot - How long for new feathers to grow?