One sweet little guy ... but discouraged a bit

I was expecting my hatch today. Early this morning 1 little guy hatched. He's most likely a roo... using the wing feathers for sexing... and he's noisy. He spent most of the day in the bator and now I've cleaned up his little butt and after bonding, put him in the brooder. I've got a stuffed duck in there with him. And he seems to be healthy.

And as for all the other eggs, well, not really sure. I don't want to do anything to them at this point. I'm hoping that a couple may hatch within the next 12 hours. Last candling I felt that there were at least 3 or 4 that had good large air sacks.

And we really didn't have any big spikes in temp. In following some of my books I did keep the humidity at 60-65% until I was told by Speckled Hen to reduce it to 50%. That's the only thing that I know of that might have caused a problem. And I did use the egg carton method, which should have helped in case they had too much humidity.

Have any of you experienced something like this? I'm totally new at this. 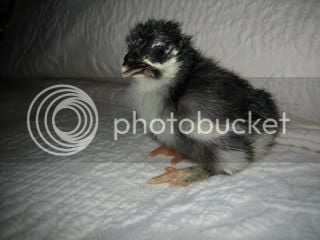 The humidity was good for the first 18 days at 50%, I promise. Reducing it from the higher number back to 50% didn't hurt and would have been the proper thing to do. At 18 days, did you then raise it back up to 65-70% for hatching? There are so many reasons why a hatch doesn't work, though. These were shipped eggs, right, Colleen? And that one could be a pullet-feather sexing may not work on the Marans, not sure, though. It doesn't work on all breeds.
Last edited: Apr 11, 2008

This little one seems fine. And although he might not be a roo, somehow from the moment I saw him I suspected. I'd love a couple of pullets, but whatever.

I'm actually fine if it is a roo, which most people might not want, but my son has a mean roo that has attack my little grandchildren and he's history.

I'll pm you.
thanks.

I can hear the disappointment in your words as I read them. I am sorry you only got one chick out of your hatch but on the bright side you did get 1 which is more than alot of us get on shipped eggs.

Hatching shipped eggs is so very unpredictable. It is also the risk I am willing to take even if it means I only get 1 specimin of a breed I like because that 1 will most likely be closer to the standards of perfection than a hatchery bird.

There is a really good article in the learning center on what some call a 'dry hatch' . I recommend everyone who attempts to hatch to read through it. Good stuff in there. Humidity plays a giant roll in the embryo development. Hatching is a learning curve in most cases. You can learn alot from a failed hatch.

I, too, faced with a bad hatch just recently and jeez, it makes you wonder with all that time and money invested in this kind of thing. It happens and most of us sometimes bite the bullet when NO chicks hatched. This time I had the incubator in the basement and the humidity was too high with all that rain we had and the damp wall doesn't help so I had to move the incubator back upstairs in my kitchen in the last week of incubation. Got three Blue Orp chicks out of a doz and BamaChicken's chicks are hatching right now and I dont think all of them will hatch. Had two dead chicks, they pipped but died. Shipping eggs are hard on them and makes me wonder if the xray machines has some effect if they do xray all packages at one point to another.

Just dont give up, all of us been thru it!

Like everyone else has said ...don't give up. I'd rather just hatch my own eggs, but to get new varieties and new bloodlines, shipped eggs is my only option so I'm willing to keep taking the risk that comes with shipped eggs. I have found tho that the less miles shipped the better so look for eggs as close to you as possible.
You must log in or register to reply here.
Share:
Reddit Pinterest Tumblr WhatsApp Email Link