I'm new here and wanted to share pics of our suburban coop. We had the shed re-roofed and painted along with our house last fall, so it was in decent shape to begin with - just a shell to build onto.

Our neighbors were leery of us venturing into chicken raising, so I worked extra hard to make the coop easy on the eyes. Now that it's completed and the chickens are here, the neighbors have come over to check it out and are always very surprised at how 'done' it is. Yes, it's overdone but the neighbors are close & we want this to be a positive experience for everyone.

Notes:
- It's completely convertible back to its previous state, the garden shed, if need be and this is why we skipped the little trap door. Our chickens range around our whole yard and use the people door, which is on barn door sliders.
- Everything that was in the shed previously is now stored in a lean-to that we built on the back side of the structure.
- The coop itself is merely a walled off portion of the 6x12' shed. The wall is basically studs with hardware cloth secured with hammer-in staples.
- The top of the coop is a pallet & an old french door laid across it for now. They're heavy as all get-out, and I don't think racoons will be able to move them.. but I'll get in there soon and run more hardware cloth across the top.
- The interior coop door is a 28" screen door, purchased new at Habitat for humanity for ten bucks. The window was also purchased there for 20.
- The floor of the shed is a concrete pad, but as a porous surface I feared it was going to be a nightmare to keep clean & relatively odor free, so I cut several pallets and fit them in as a floating subfloor and then installed OSB sheets as the actual floor. Seams were caulked and then it was all painted over.
- The surfaces inside of the coop that are painted, floor & next box shelving, are done so with marine enamel to make them scrubbable. The nest box is an old entertainment center on its side for easier chicken access and then also painted with the marine enamel. I think I'll need to build a ramp soon.
- We have adopted the deep litter method for bedding. Since it's a small space, and we have kids in & out several days a week, we scoop 1x a day and put a couple scoops of fresh stuff in daily as well. We used leftover pallets on end and put together a compost bin for the waste.

It's working out great. Well except for the chore chart that everyone ignores but me, that's a different post. ;-)

Enjoy the pics and feel free to ask questions & make suggestions.
Also: I am a novice woodworker at best, so pardon the workmanship on the coop. It's solid but isn't winning any beauty contests!
Erica

Exterior & lean-to was roofed & painted to match the house. 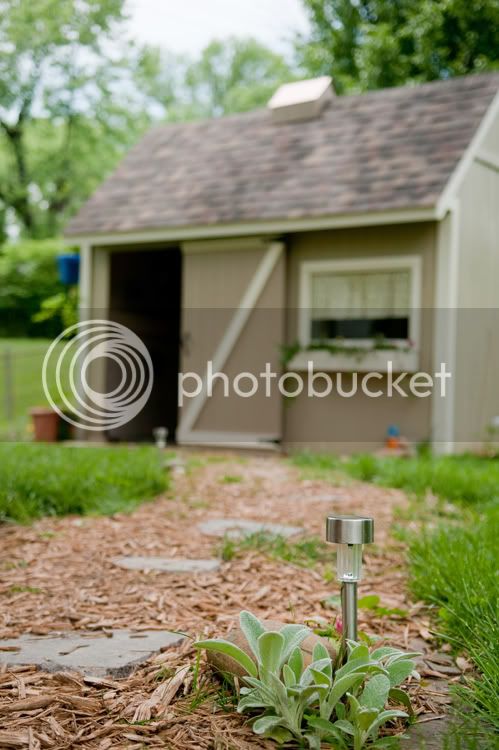 Window box planter. Hubby's working 60+ hour weeks now so I picked up the circular saw and just figured it out. (big hit with the neighbors) 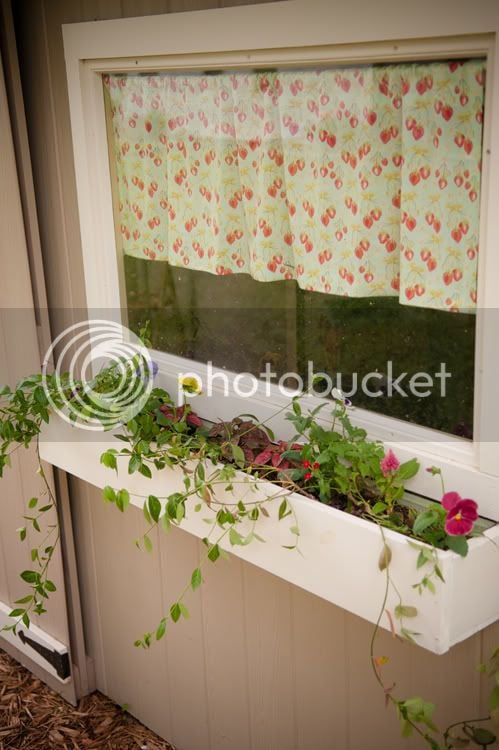 Sorry I couldn't get more into the picture, but you get the idea.. 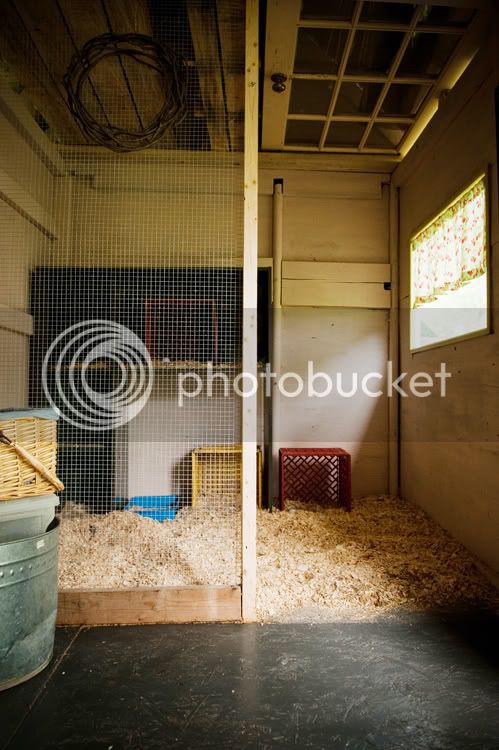 Old cabinet original to the structure. 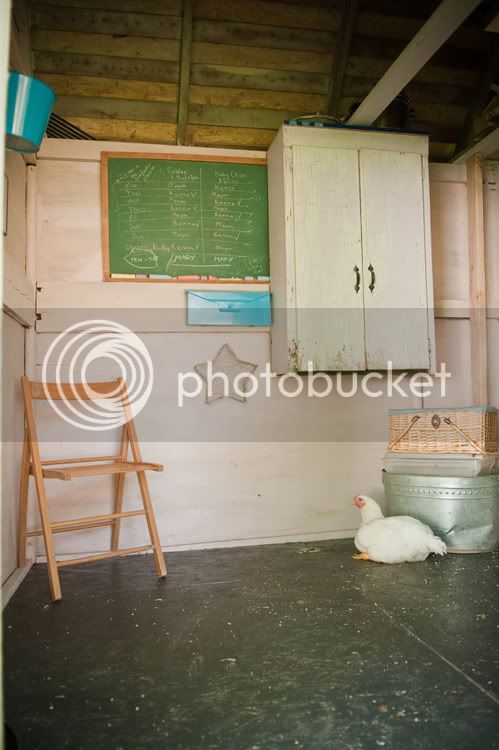 Old mailbox spraypainted up and is used for gloves. Neighbor kids all have their own pair.. gotta love the dollar bin at the hardware store! 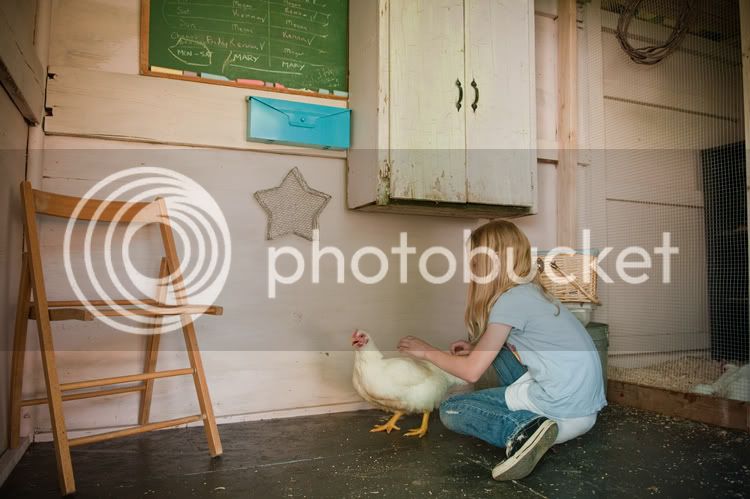 PeeWee checking out the activity in the coop. Metal tub usually has extra pine shavings, and the plastic tub inside has food. Basket sitting on top of that has homemade chemical-free cleaning spray, old towel scraps, and trash bags. 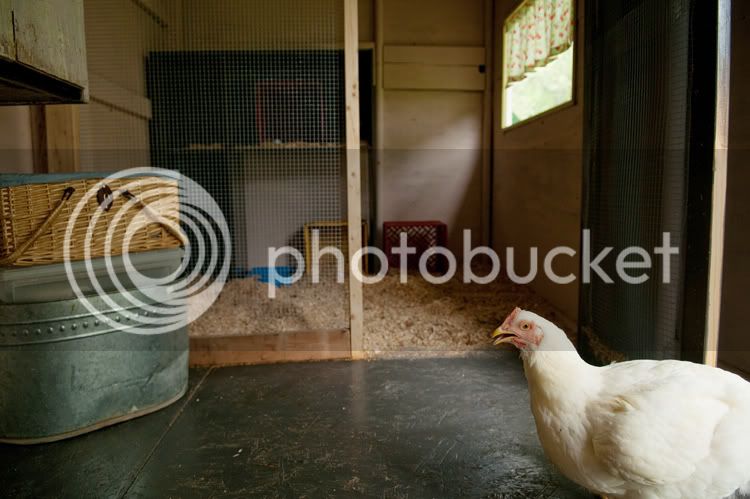 View from inside the coop: 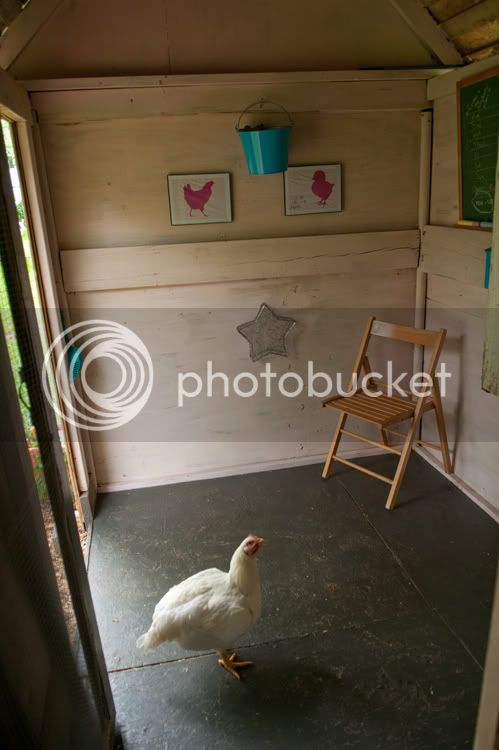 The artwork, LoL (right image says "chillin' with my peeps") and the kids love it! Extra gloves are kept in the bucket. 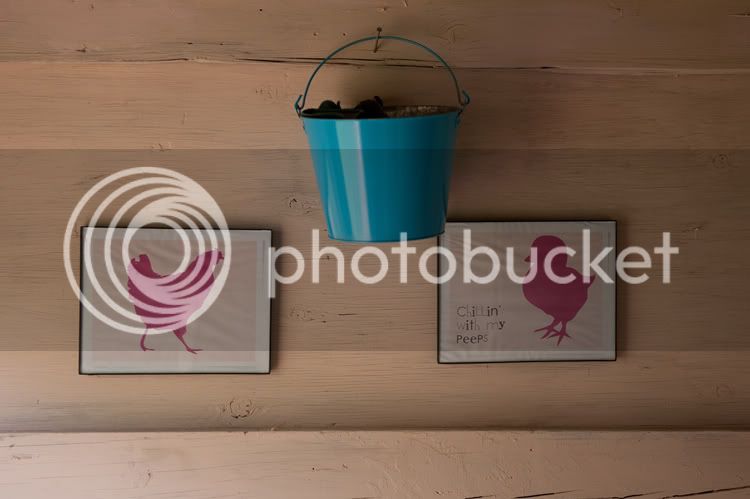 Yes, it is beautiful!!

You both did a fantastic job!!!

and thanks for sharing too.

Thank you for the welcome to BYC!

Your coop is really nice-and clean! It's very cute! My son built a coop with an attached run-it's supposed to be a chicken tractor-but it ended up being very heavy. I can't get to all of the areas-so I don't think I am going to be able to keep it as clean as I would like. Eventually, I would love a walk in coop like yours. I am very new to chickens-and excited to learn.
-------------
Connie

Coop is really cool. Wuts with the door on the ceiling? Just curious. Lol.

Thanks! We designed it to be easy to keep clean so neighbors wouldn't have that to complain about. The door is up there as part of a makeshift ceiling/predator-proofing and it is sooo heavy! It still lets light into the rafters, instead of blocking it out. Either way, I like it better there than taking up real estate in our tiny garage.

Terrific coop! I love what you did with yours.

Suitable coop and run for 5 chickens?
2