Our coop & tractor... LOTS OF PICTURES, NOT DIAL-UP FRIENDLY, SORRY!!

Friday I finally got the nest boxes installed, so I thought I would post some pictures. Right now I have 9 RIR pullets, and 5 Barred Rocks, straight run, 2 of which appear to be Roos. They are now about 12 weeks old, and we are really looking forward to eggs. The Coop is 6 x 7', 6' high in the front, and 5' in the back. It backs up to my neighbor's retaining wall, and they have been very understanding, in fact, seem almost as excited about the prospect of fresh eggs as we are. They have taken to dumping their vegetable trimmings in our compost pile, where the chickens can pick through them. We also have 28 Cornish x's, which are about 4 weeks old, and seem to grow like monsters.

Here is the view from the front: 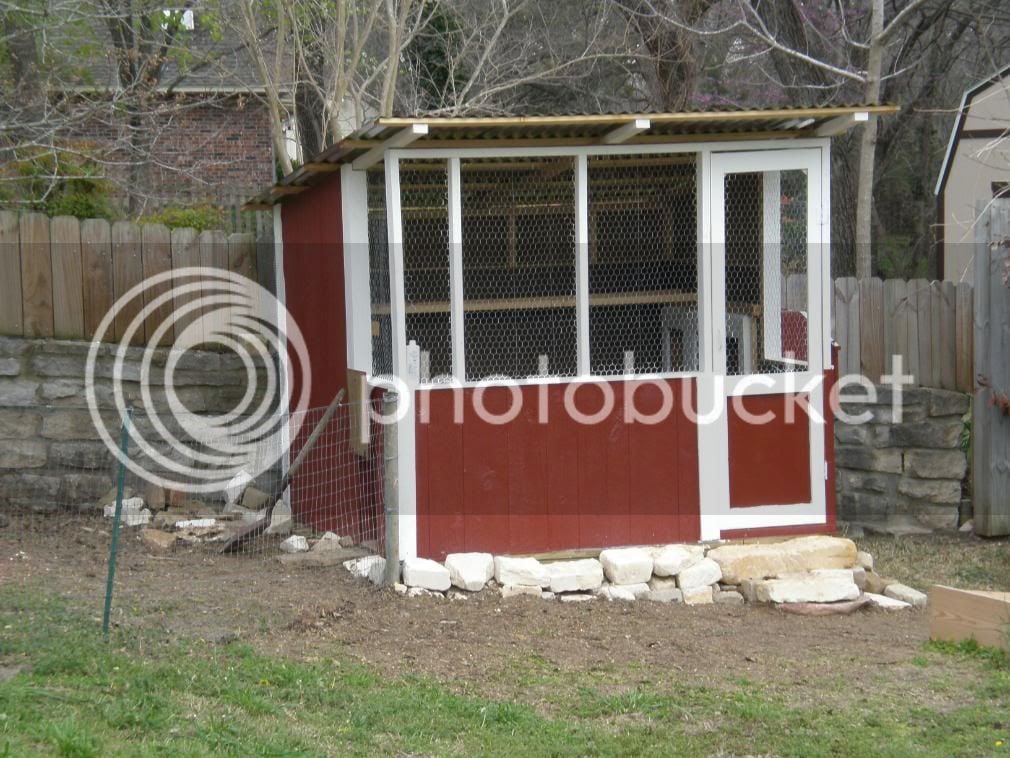 From the nest box side: 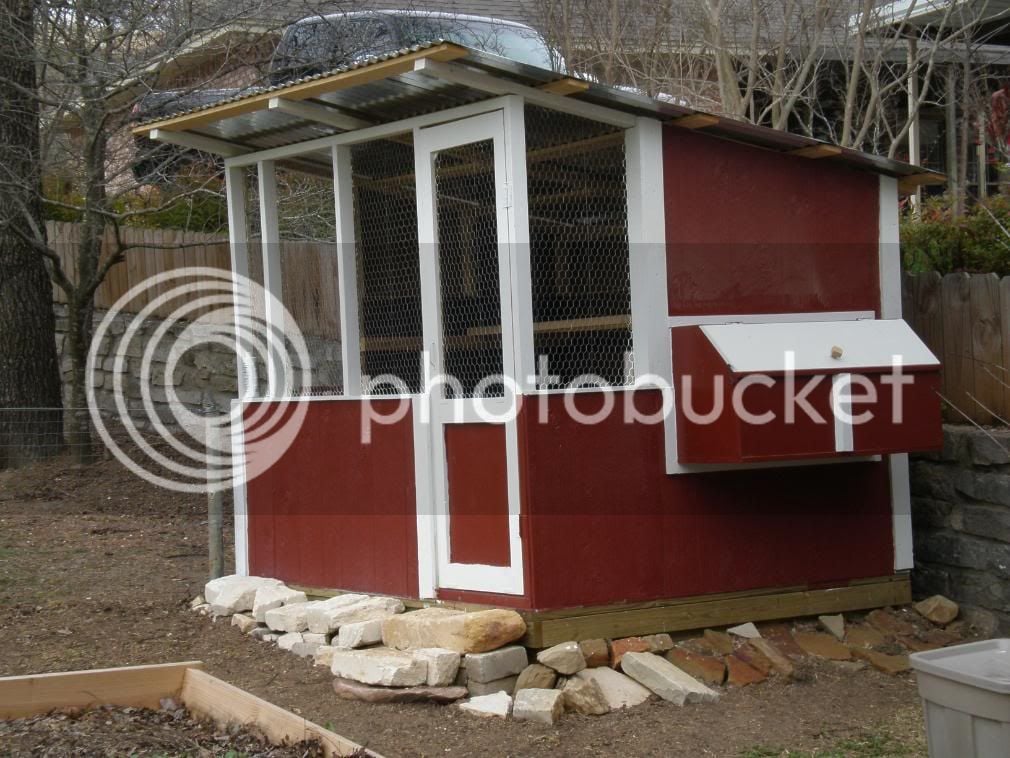 The two sets of roosts: 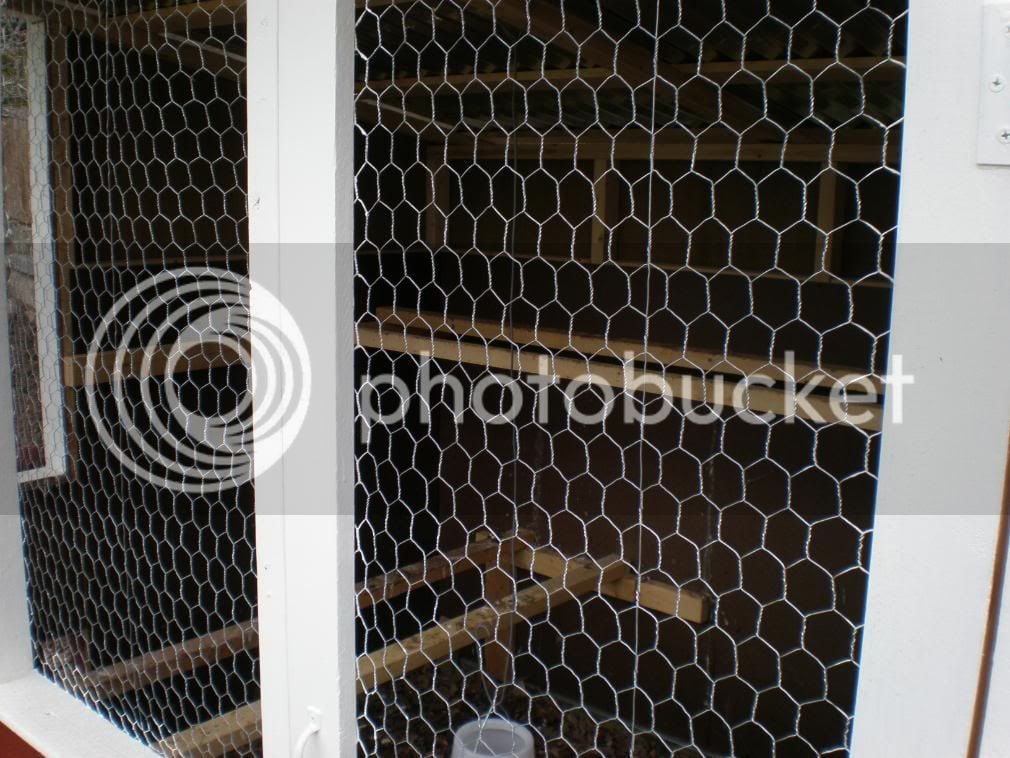 The nest boxes from inside the coop: 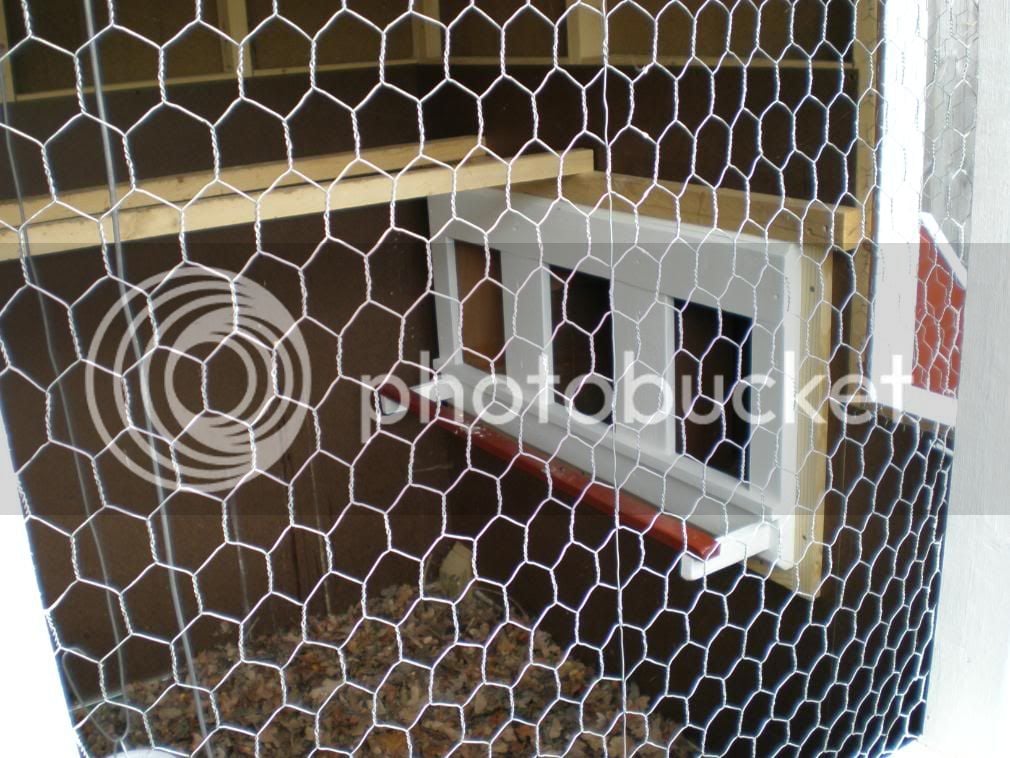 Close up of the nestbox, open: 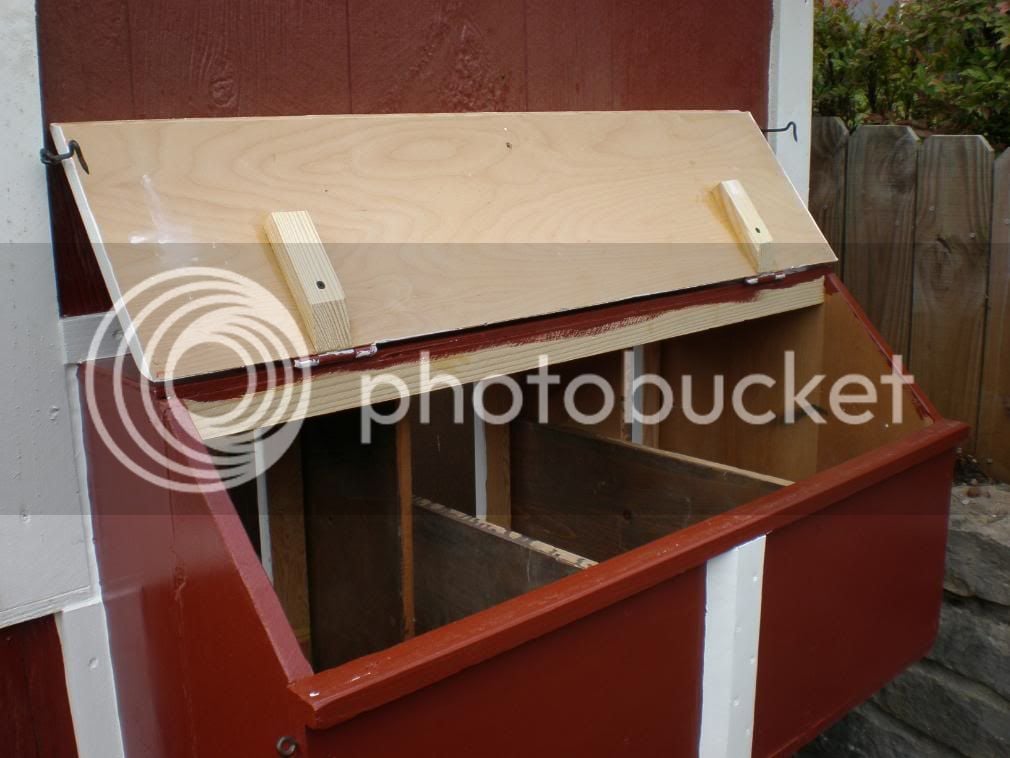 Our chicken tractor, with the cornish x's: 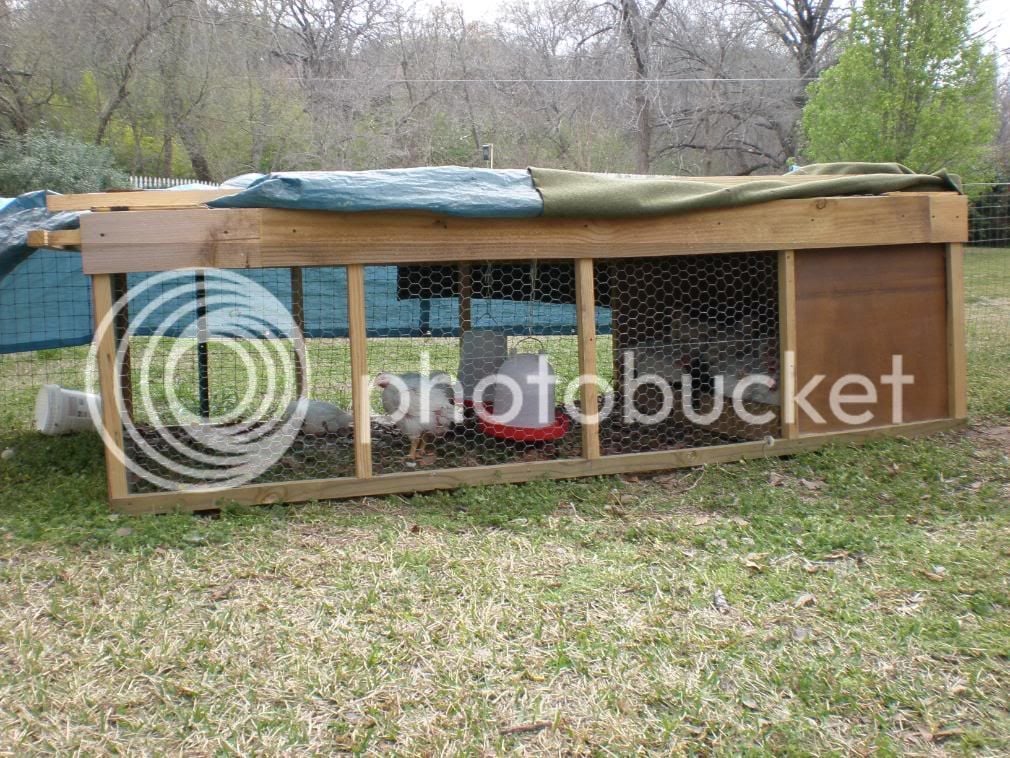 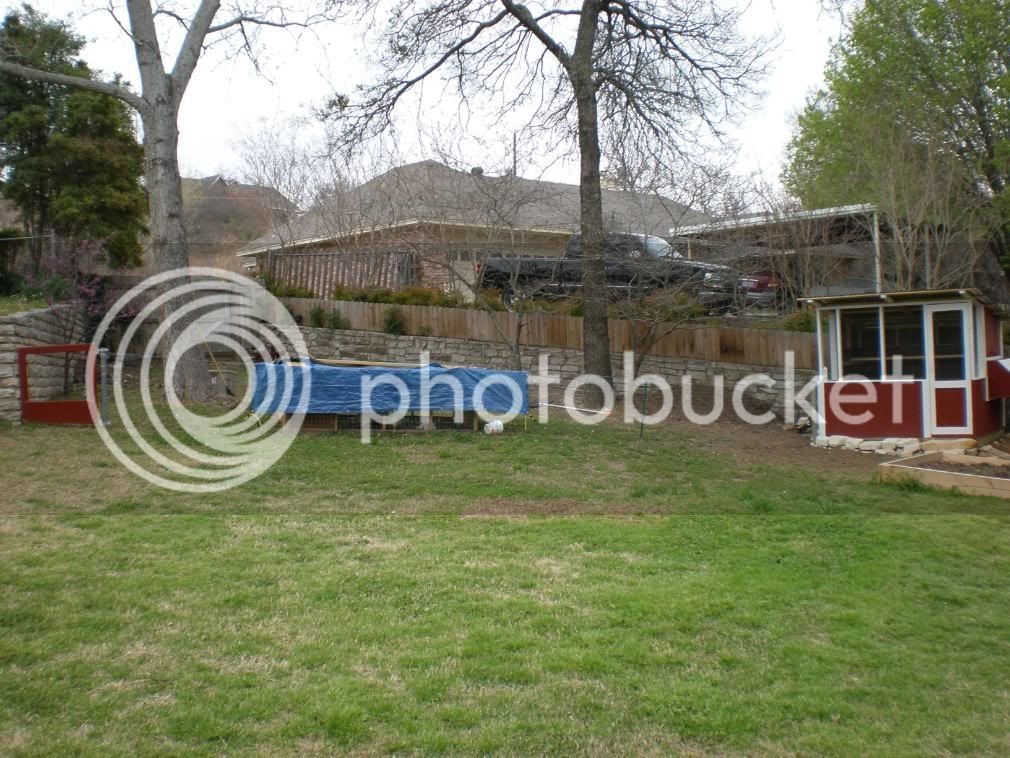 There used to be a swing set in that corner, but as our children are too big for it, we gave it away. The wire for the fence, and the wood for the gate were scraps from a friend, who was cleaning out his yard. I hope to put an enclosed run to the right of the coop eventually, as right now I am reluctant to leave the chickens out unsupervised. And, the bigger ones really pester the Cornish chicks, so I have started letting them out in turns, which is a pain, as herding 28 Cornish chicks is crazy. I have had one die, and I think it may have been a heart attack brought on by the stress of being chased around the yard to put back in the pen. The tractor was built from a packing crate that I ripped into strips on the same friend's table saw. The nest boxes were built from torn down pieces from my parent's remodel project. The chicken coop is the only thing built from new materials. I drew it up after watching the forum for a couple weeks, and looking around the internet. If anybody is interested, I have it in CadStd, you can download a "lite" version of the software for free, or pay $30 for the full featured package. Or, I can export it as a PDF. The drawing itself is available for free. I did not draw out the nestboxes, as they were built to accomodate the materials on hand. I did build to the approximate dimensions of McMurray's "large breed" nestboxes.

It looks nice. Must not get cold where you live, the coop is so open. Do you know if you have raccoons or weasels, etc, where you live? If you do, you may want to cover that chickenwire with hardware cloth-coons can rip right through chickenwire. And weasels can fit through 1" wire openings.
I like the way you positioned the coop, it looks great there. You'll love your Barred Rocks, my fav breed.
Last edited: Mar 23, 2008

I noticed that the roosting rods are over the food. Aren't you worried about contaminations?

When I first built the coop, and before it was painted, I had about 3/4 of the chicken wire covered with heavy black plastic. Mostly for the wind. Recently it would have been nice to have it up again, as it has rained pretty heavily, and much of the bedding inside (oak leaves) has gotten wet from the blowing rain. But, then we have 2 days in a row where it is in the 80's, and you tend to forget the 30's and the rain...

Thanks for the nice comment, the Barred Rocks are really nice, I think I might try some Dorkings next, anybody know where I can get them?

It looks like the roosts are over the feeder, but they aren't. Just the angle of the photo.

You should make a personal page for it and enter it in the coop contest.

I really have enjoyed building this, and now have fun watching the chickens. I will be glad when the Cornish are done though, they make an awful mess.

I hope to get some Dorkings eventually.

Speckled: It doesn't get too cold, a few nights since the chickens moved in, it was below freezing. This fall I will probably add some sort of storm window to protect better from the wind.