Hi, we are new chicken people and need some advice from those of you who are experienced.

We have a 2 week old silkie, Sylvie. She's been having trouble with pasty butt, so I've been giving her warm water baths once every 36 hours or so to keep her unblocked and relatively clean. Other than the pasty butt, she seems to be doing just fine for the week that we have had her.

I cleaned her off earlier this evening and blew her dry, putting vaseline around her vent area after. Later, she seemed to be struggling to pass a poo and --since I'd just finished reading this site's thread on pasty butt -- I used some warm water to clean her off again and massaged her below the vent to help her pass a bit of poo. Then I blow dryed her again and this time put Preparation H on her.

We've been keeping an eye on Sylvie and shortly after I did this, her butt ballooned up. Then, after a time, it calmed down. Later my husband said that it was ballooned back up again and than she's now laying down with her butt in the air, breathing heavily and that it seemed like she was bearing down to pass something.

She was standing up a few minutes later, still breathing heavily. My husband reached in the box and massaged her a bit below the vent and got a bit of poo out and she hopped away, but still seems to be having trouble. Throughout all this, she's been trying to peck at her bum to clear it away.

Like some of the other folks in the pasty butt thread, we can see her vent anatomy with the swell at times. The red flesh inside with a white something-or-another at the center, it sometimes pulsates, and so on.

Our other 2 chicks, an Easter Egger and a Black Copper Maran, are doing just fine--but are about 3x as big as the Silkie. We assume this is a breed/size difference. We did have a second Silkie, but the poor little gal passed away Friday night. We thought it was a failure to thrive situation, but are concerned that --because she was even smaller than Sylvie -- she was maybe too cold (as we just realized that Sylvie has been too chilly even though our other 2 have been fine. Of course they've been fine, they're way bigger! We didn't take the size difference into account for temp regulation, so now we feel like dumb awful jerks). All that being said, none of the other chicks are having pasty butt.

Sylvie seems to be eating and drinking like normal. We're just giving her regular water and Country Companion chick starter feed, occasionally a bit of grit mixed in the feed.

The chicks are housed in a plastic storage container with a screen on top, a 150 watt heat lamp dropped a bit below the top, water, feed, and paper bedding. We put a couple of rocks in for interest/entertainment.

So, the pasty butt thread said that chicks usually grow out of this if they survive. But, we are understandably concerned about the "if they survive" part. What advice do you have?

Could be your brooder is too hot. Totes can heat up quickly. I would use a thermometer and check the temperature. Pasty butt can be caused by too much heat.

I had one with chronic pasty butt last year. She had a slight prolapse, and would scream each time she pooped. She eventually grew out of it and became more normal at around 3 months.
S

Here's a photo of her bum. 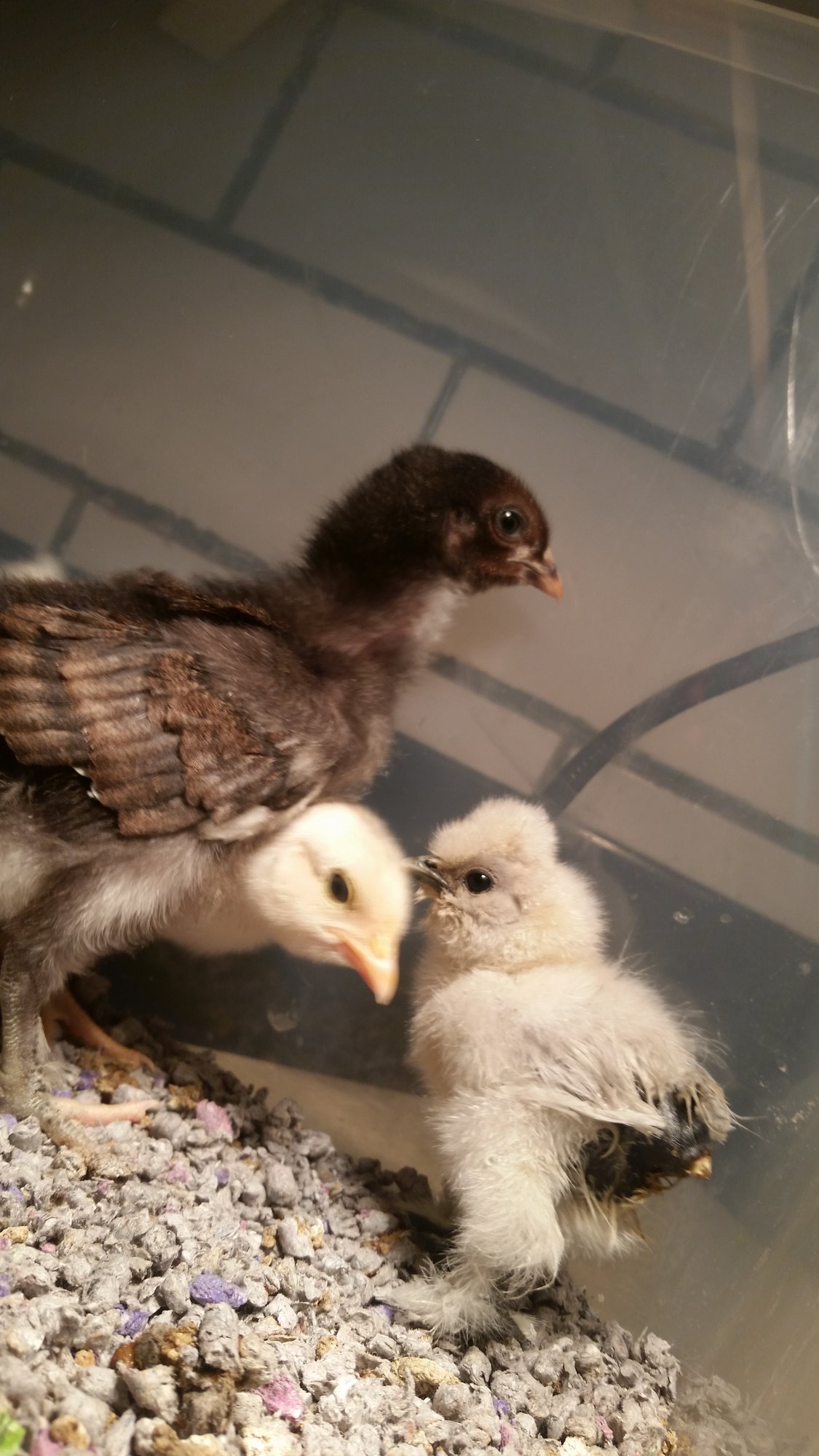 Is she just wet in the photo?
I’m concerned that you can see her skin.
She looks bare; like her down is gone.
Are the other chicks pecking at her bum?

I’m having a pasty butt problem with my 5 day old bantams- a Silkie & a Cochin.
The Cochin has very runny stool but both are eating, drinking and behaving normally.
My 6 Naked Neck chicks are fine.
I have a thermometer in my brooder and it said 100 degrees.
Based on what oldhen said, I raised the heat lamp up so now it says 95 degrees.
Hopefully that will help.

Wait, what kind of litter is that?

Starmeyer Chicks said:
She's been having trouble with pasty butt, so I've been giving her warm water baths once every 36 hours or so to keep her unblocked and relatively clean.
Click to expand...

Starmeyer Chicks said:
we can see her vent anatomy with the swell at times. The red flesh inside with a white something-or-another at the center, it sometimes pulsates, and so on.
Click to expand...

What is the white something or other sticking out - is that bedding? Can you lubricate the vent and gently work that piece of white out?

I would wash her up more often or even give her a soak in a warm epsom salts bath. From your description her bowels are blocked and she's constipated.

Keep her drinking well, see if she will eat wet chick starter. It may be beneficial to move her to her own cage/brooder so you can monitor her more closely - place her on paper towels or a puppy pad.
I'm like@ChooksNQuilts that bedding is different - and I wonder if she ate some of it. You can give her a little coconut oil or mineral oil orally to see if that helps get things moving - but you still need to unblock that vent.

Hi All, thanks so much for all of the advice! To answer some of the questions: no, the others are not pecking on her; the white stuff in the photo is some dirty fluff on the other side of her bum; she does not appear to have eaten any of the litter and her poops have been mostly normal in appearance, though indeed difficult at times to pass; the bedding is store-bought paper bedding from Rural King, nothing out of the ordinary.

i checked the temp of the brooder with an oral thermometer and it's reading "low". Clearly I need a more appropriate thermometer. But, the chicks are neither piled on top of each other or constantly spread out and panting/laying down. I think we're at a good happy medium temp wise.

Sylvie's butt has been looking much better the past couple days. She's been successfully pooping and it hasn't been as pasty. We are keeping her bum clean and lubricated (on the outside) with Vaseline. She's been trying to clean it some, the other chicks are not bothering it. I'm relieved that her bum no longer seems super duper swollen; just somewhat protruded. I'll keep you all posted on how Sylvie's doing!