I've never had a sick duck, so I'm going to include every detail, even though some of it might not help you.

It all started when I went out to see them. Puddles came over to get water, but it was empty. I took it out, and went outside to refill it. Once I got back inside I turned it upside down, and I then realized I hadn't put the lid on, and it spilled all over the duck enclosure. The ducks were freaking out. After I laid the towels down, I looked at puddles, and she was snorting black/brownish stuff from her nose. I ran upstairs, and filled up the tub with warm water, and put in some peas. After they were in the bath, Puddles ate some peas, and then this snot/saliva slimey stuff started coming from her mouth, and nose. She washed it out, but then vomited in the tub. After she vomited she was perky. I decided to take them out, and let them dry off (By the way, I sit there with a towel, and dry them naturally. They are too scared for a blow drier) and she started snorting the slimey stuff again. She was also doing this vibrating thing, and every time she did it she would freak out. (I'm also going to add that every time I pick them up, they leave this crystal looking stuff almost like tiny shreds of skin on my lap.) When I took them off my lap, I saw Puddles toenail had lifted up, and was bleeding, so I dipped it in the tub and the bleeding stopped. They are in their brooder now.

So what should I do?! I have never had my duckies doing this. Except for all this, their personality's are still the same, and they aren't freaking out.

They keep shaking... Could it be pneumonia?

Are they shaking there heads back and forth throwing the goo out? or just shivering? its coming out of there nose? or just mouth? Do they do this just when your around? (try keeping an eye on them without them knowing your there and monitor there behavior) pictures might help. I'm assuming the breed is pekin? how old?
do they have a heat lamp? if not whats the temp of there surroundings?
Last edited: Mar 7, 2011

Quote:
They do shake their heads to get the goo out, but they also shiver. It's coming out of their mouth mostly. It was going all over so it could be coming out of their nose i guess. I checked on them a while ago (They couldn't see me, because I was behind them, and they can;t really see over the brooder walls.), and they seemed OK, but Im still worried. They are Pekins. Today they are 3 weeks exactly. Yes they have a heat lamp, it's at 80 degrees F.

I'm not sure what to tell you, it could be something but then again it might not be. When my ducklings get to they stage kind right at the beginning of the "teenage" stage they do this thing where they would all regurgitate there food if i picked them up or scared them, and then when i would set them back down they would give a quick shake to get the gunk out and get a drink and would be fine, not sure if this can be considered normal but the ducklings that did it all made it to adult hood fine.

Does the gunk resemble the color of the food? i'm still not sure as to the shivering???? sorry i can't be anymore help, hopefully you will get some better answers...
E

It sounds like she may have a sinus infection.
Has she had clean water to clear her nares with? 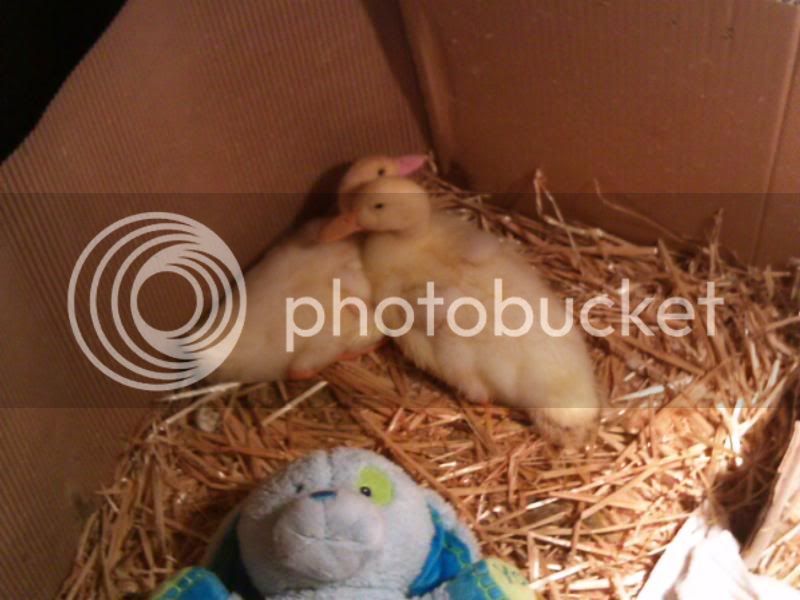 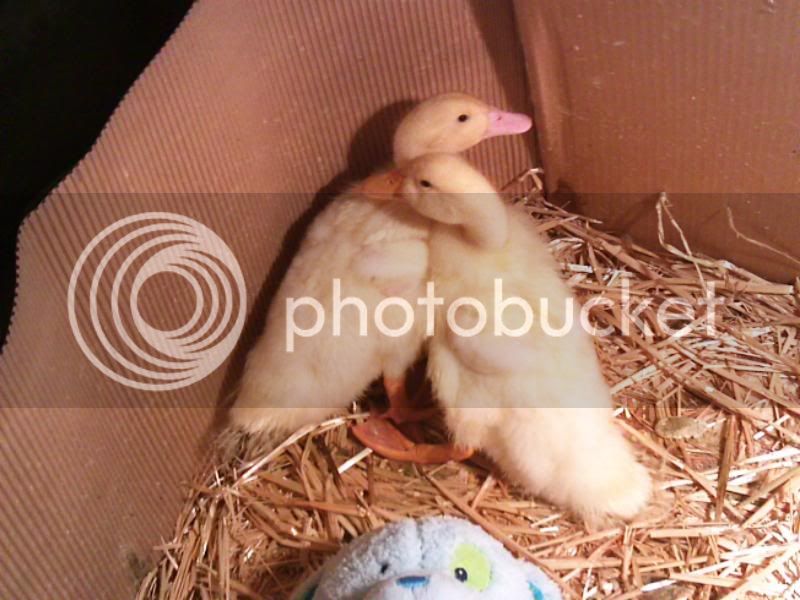 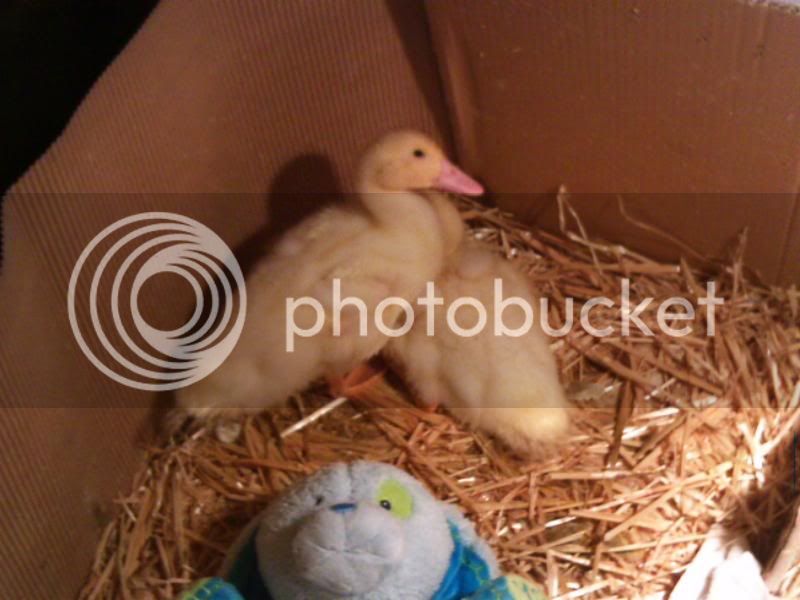 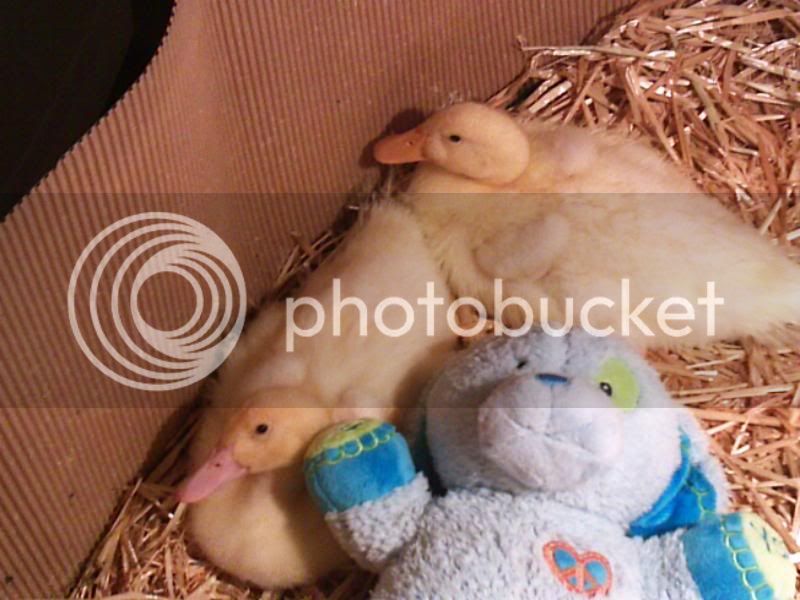 Here are the pics.. They look normal in them though, I just took them.
The goo is clear. Their food is a tan color.
They missed their bath yesterday, and that's the only time they have deep enough water to clear their nostrils. Their waterer isn't deep enough to fit their whole beak in... Should I get a deeper one???

Is there any chance they ate some worms? When it rains our porch gets a bunch of skinny reddish pink worms on it, my chickens gobble them up normally but if the ducks see them first they'll each eat a few and then start foaming at the mouth and shake their heads ( imagine a St. Bernard dog shaking it's head and slobber flying everywhere LOL). If not worms, is there something else they may have eaten?
I believe the "shiney stuff" you're finding on your lap is their baby down..I call it duckling dust.

Does she seem to be eating and drinking ok? No sign of obstruction ?

absolutely give them a deeper water dish. A heavy coffee cup that they can't tip over works well. They need to be able to dunk their little faces in the water.
They sure are cute!

Quote:
She's eating and drinking fine. We've never had a problem with that! lol.
I would doubt worms could get in there. They are in the garage, and they have puppy pads as the bedding. It probably is down. They are starting to sprout feathers.
E

If you have a butter tub, cut a pie shaped piece out of the lid big enough for them to fit their bills into deep enough to clear out the nares.
They need access to the bill cleaning water all of the time.
They're absolutely precious.

A
Does anyone else have trouble getting their ducklings/ducks to swim?

OMG! Violeta Duck is missing! … Disclaimer: The story has a happy end!