THIS POST IS FOR ALL OF YOU WONDERFUL PEOPLE ON HERE WHO HAVE BROODY HENS!!! (THEY CAN HAVE CHICKS WITH THEM)!

TELL WHAT THERE NAME IS

TELL WHAT KIND OF BROODY HEN THEY ARE

AND GIVE A LITTLE SHORT STORY ABOUT THAT HEN lil banty chick 1 of 7^^^^
Ok breed: Disigner hen....probably some type of EE as she lays GIANT olive eggs
Name: Cautious
Story: This is her first brood of chicks and she is an awsome mom. She lays eggs that are usually around 2 5/8 ounces!! She was a mothersday gift to my mom along with 3 others after a dog massacer. One of those, who passed of a respertory illness, layed 3 ounce eggs every now and then and is the last of those hens. She is 5 or 6 years old and is better than ever.

The Redwoods of California

Name: Athena
Breed: Red shouldered yokohama
Story: ummmmm, her chick is a OEG/Brahma banty cross? I dunno what I should say!

Name: Ivory
Breed: white OEG
Story: I had thirteen broodies, and one clutch of eggs, thinking I would give each hen one chick of the clutch. Ivory got the first chick! Alright, I guess I'll stop at that!

Name: Millie
Breed: Cochin Bantam
Chicks: SS Hamburg (hens) X Partridge Cochin Bantam(rooster)
Story: She started off with four little white eggs. Then, those sneaky Hamburgs started to add on to her nest. Soon, nine eggs were there! So after candling it was back down to the original four. Then up to seven again! Now, three of the original four have hatched, and we're waiting on just one, still peeping and scratching, it's going to hatch soon!

And Millie with her little fuzzbutts! One seems to be camera shy!

The chicks have the Hamburg comb, but they don't look like either of their parents as chicks. Any ideas as to the color?
(Here's some pics off Google for reference).
SS Hamburg chick: 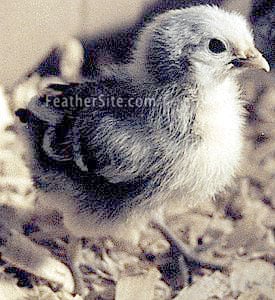 Name: Zoomer
Breed: American Game
Story: She came up missing one night for head count & we figured that maybe she had a nest somewhere and was broody. We were still fearful in knowing that it was possible that a dog could've got her. We looked all over our property many times hoping to find her. Three weeks later she came home with TWELVE chicks!

Check out her trying to protect her chicks from the curious teenagers - she looks like a turkey!

Here's Zoomer with all her 12 chicks under her - all you see are feet!

Name: Speedy
Breed: OEGB
Story: We bought her at a livestock auction & she's been the best broody. When you stroke her head she closes her eyes and practically goes to sleep. Here's Speedy (she ended up hatching out 4 chicks):

Name: Momma
Breed: Standard Buff Orpington
Story: "Momma" hit 4 years old in April. This is her 3rd year with babies. Momma was my first broody after we lost old Black Momma, so she inherited the name. Momma is very protective of her little ones, but she does not attack people she knows. If I bend over and pick one up she growls and runs at me, stops short, starts pacing, and clucking loudly. If I did actually hurt one, I have no doupt she would flog the crap out of me or anyone else. If bent over at the time, she would go for the FACE. When not broody she lays regularly all year long, but as soon as it gets warm she is in her nest waiting for eggs or babies. There are 13 babies, but 1 couldn't figure out how to get out of the Broody Hen House. It has to be a Rooster, dumb as a stump that one is. The little ones are all Ameraucanas that I incubated in an incubator. Momma got them as the pipped and some already hatched.
Picture 1
Picture 2

Broody House: 2' wide and 5' long with legs in case of a flooding rain. The ramp closes up tight for nighttime protection. The bottom is 1/4" wire, but I put in a board for the nest side and waterer.

Chicks coming! Who else is anxiously waiting?
2 3 4

Spring Broody Chicks (due to hatch)

Who has the most handsome rooster! Fun competition
10 11 12