Is it okay to use pressure treated wood for the RUN area? I know in the past it was said to be quite toxic to animals, but these days it is supposed to be okay to use. It will only be used for the run area.

DH built the frame for this small coop out of pressure treated 2x4's. The gang has been living there for 5 weeks and we've not noticed any problems at all. 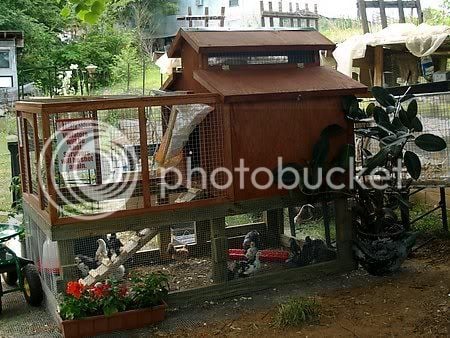 Depends on how you look at it. From an organic raising perspective, it's not okay to use pressure treated anywhere, including the run. You would think that perhaps the toxic effects would be a bit less in the open air of the run than compared to the closed coop. However, if they're ever going to be scratching in the soil near the pressure treated timbers, then they would be exposed to its toxins that have leached into the soil (not to mention if they ever peck at the wood itself).

Other options to consider would be redwood or metal. Obviously, redwood would have to be replaced more often, but it may be the better option if you don't have the tools to cut the metal. I personally prefer the aesthetics of redwood to metal as well, so that's what we'll be using for our coop and run.

And to retard any decay on corner posts, you might consider pouring a concrete mini-caison and attaching the redwood post to it with one of those metal brackets that suspends the post above the caison a few inches. Sorry, don't know all the technical lingo here (that's dh's dept), so if that doesn't make sense, post back and I'll have him explain it.

I agree that from a purely organic POV, treated lumber probably wouldn't be "legal".

However, out of curiosity, while living in Indiana I took two soil samples from the soil directly underneath the treated lumber I had used at the edge of my garden. One I took about a year after placing the treated lumber on the ground; another was 5 years later. The samples were tested for heavy metals, including copper and arsenic. Neither sample showed elevated levels of anything except organic matter.

Also, Abilene only gets about 24 inches of rain a year. Indiana got about 40, and some of it was pretty acidic. I would think if any leaching was going to happen, it would be more likely to happen in those conditions.

Not sure that Mac is in Abilene...

I used treated lumber in my run too. I'm not sure what it was treated with though. The EPA restricted sales of CCA treated lumber 4 years ago to certain industrial applications and it is not available for home use anymore. I think the new stuff is arsenic free but higher in copper compounds.

woops! sorry, you'll always be the first mac i think of while on the forum!

Oh nooooooo...we are in the midst of building a chicken coop right now and have indeed bought all pressurized wood (for the posts and framing). Is this going to be a huge problem? We're specifically trying to have organic eggs. The posts are sunk into concrete--can we put some kind of sealant on the exposed wood?

I had no idea this was an issue--bought the pressure-treated wood to avoid having to replace wood in five years...

I believe that sealing any exposed wood should take care of the problem. The part that is sunk into concrete should be fine, also. Exposed wood that isn't sealed will leach what ever it's treated with into the soil, when it rains. The old treatment would then get taken up by plants, which was a problem if the plant was eaten. Or if you brushed against the wood, the old treatments would rub off on your hand and be absorbed through your skin.

I don't know what the new treated wood is treated with. It's supposed to be safer, but they used to say the old arsenic stuff was safe, too.

I'd want to see a material safety data sheet on it.

My husband and I are in the midst of making the coop, using some lumber from a friends porch (she built last year), and have treated wood in the roof assembly. I believe it is treated. It's so far just in the roof part.

Pressure treated wood isnt dangerous to use. All my pens are built out of pressure treated wood and Ive never had any problems with it.
http://www.factsfacts.com/MyHomeRepair/CCAwood.htm
You must log in or register to reply here.
Share:
Reddit Pinterest Tumblr WhatsApp Email Link