So these are from a feaathered leg collection. Im thinking they are different duccles and brahmas but wondering if anyone thinks any are cochins, besides the obvious frizzle in the group.

Man i lucked out, my silkie hen "gideon" happily accepted all the bought chicks and at one time stuffed 30 bantams under her haha! Shes so tiny i dont know how they fit. Now she has less, Ive already sold the silkies she hatched herself. (Except one i had to keep as it was my first silkie hatching) 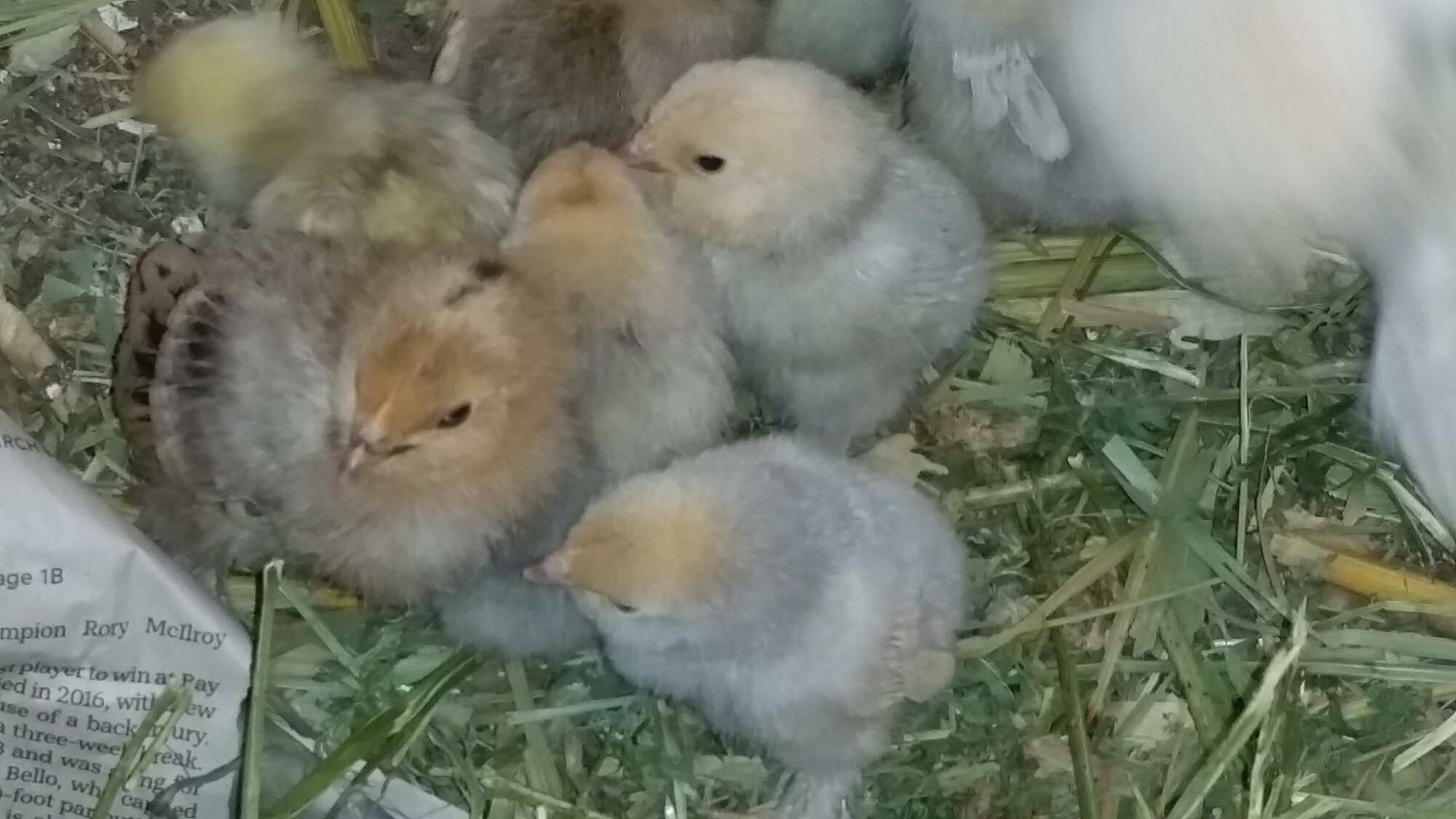 The three with yellow heads i think are porcelain d'uccles, the bigger one on the left I think is a buff japanese 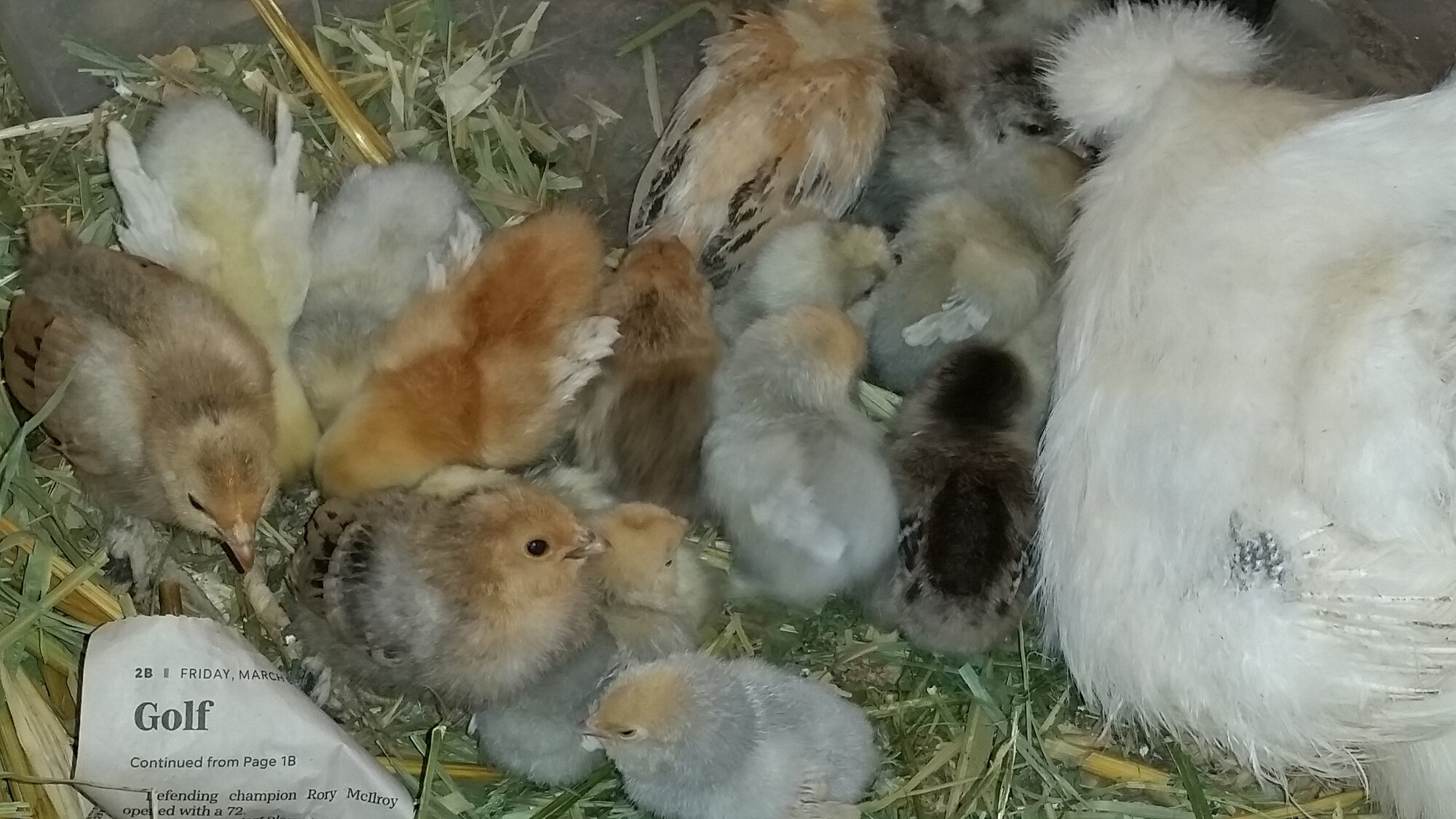 the far right i think is a brahma? 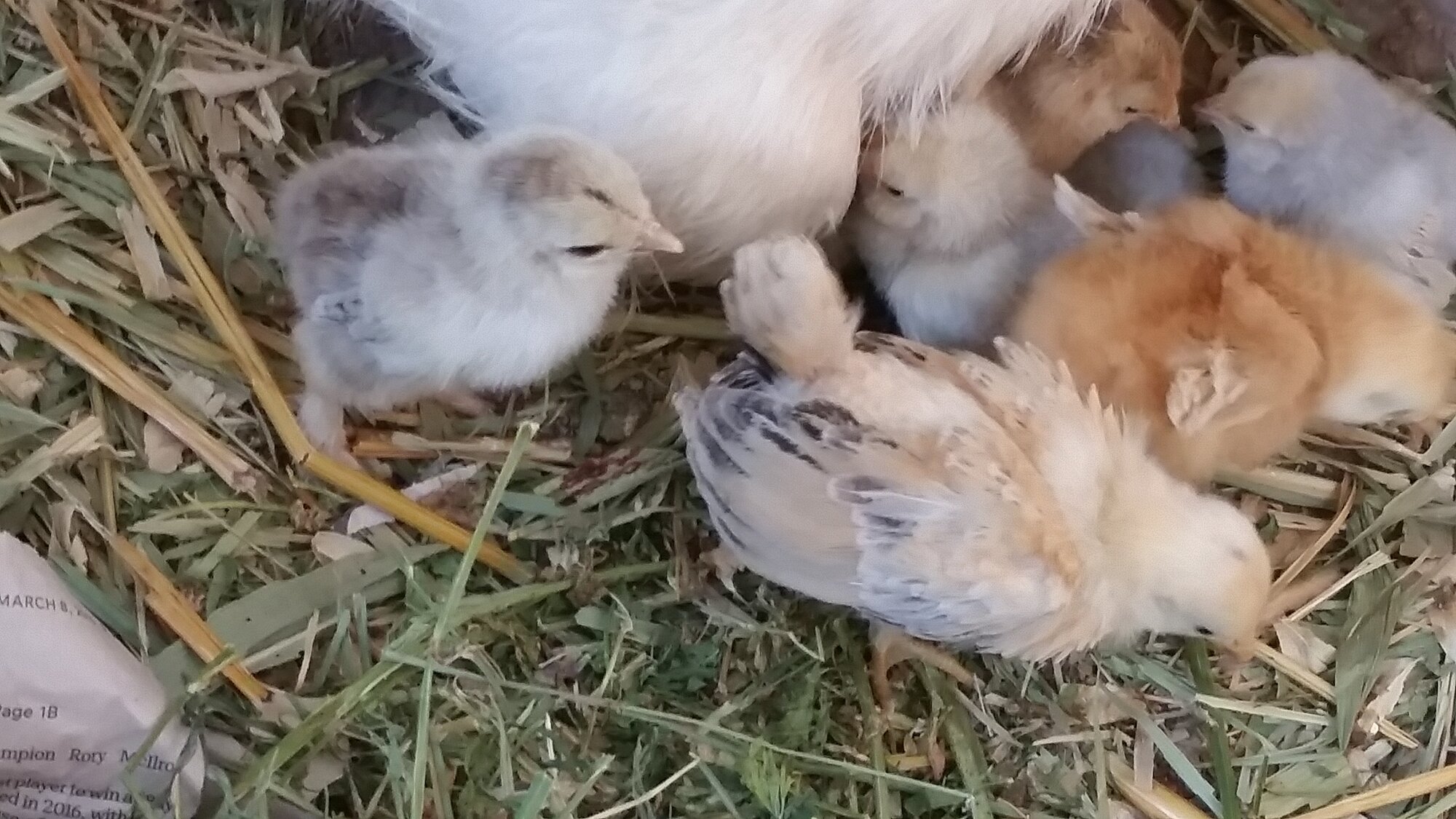 The far left i have no idea, the middle/bottom bigger one i think is a buff japanese? 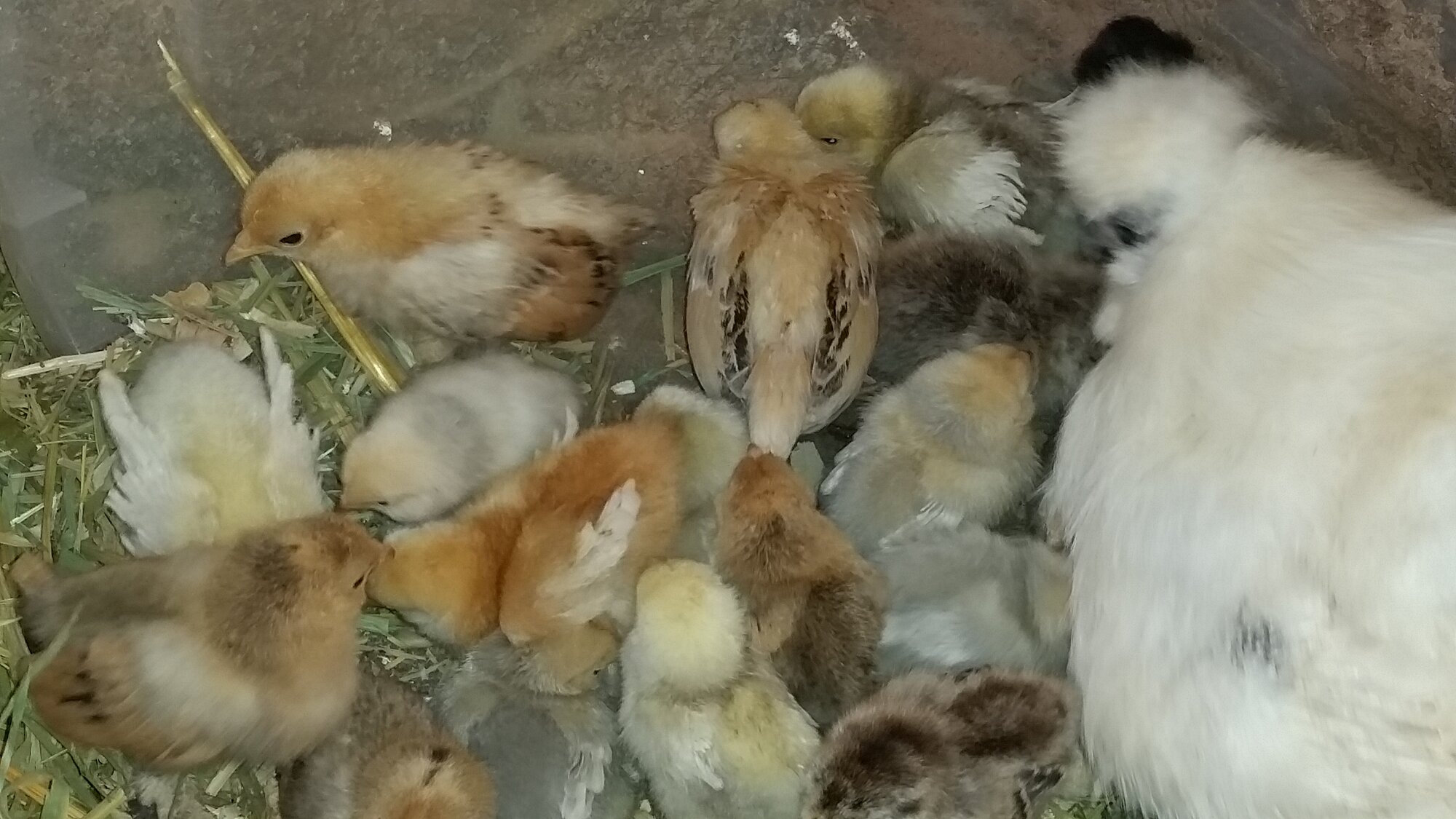 theres a possible bif japanese with a pointy tail in the center touching a light brown one, who is also immediately to the right of a red frizz, could the light brown be a cochin? 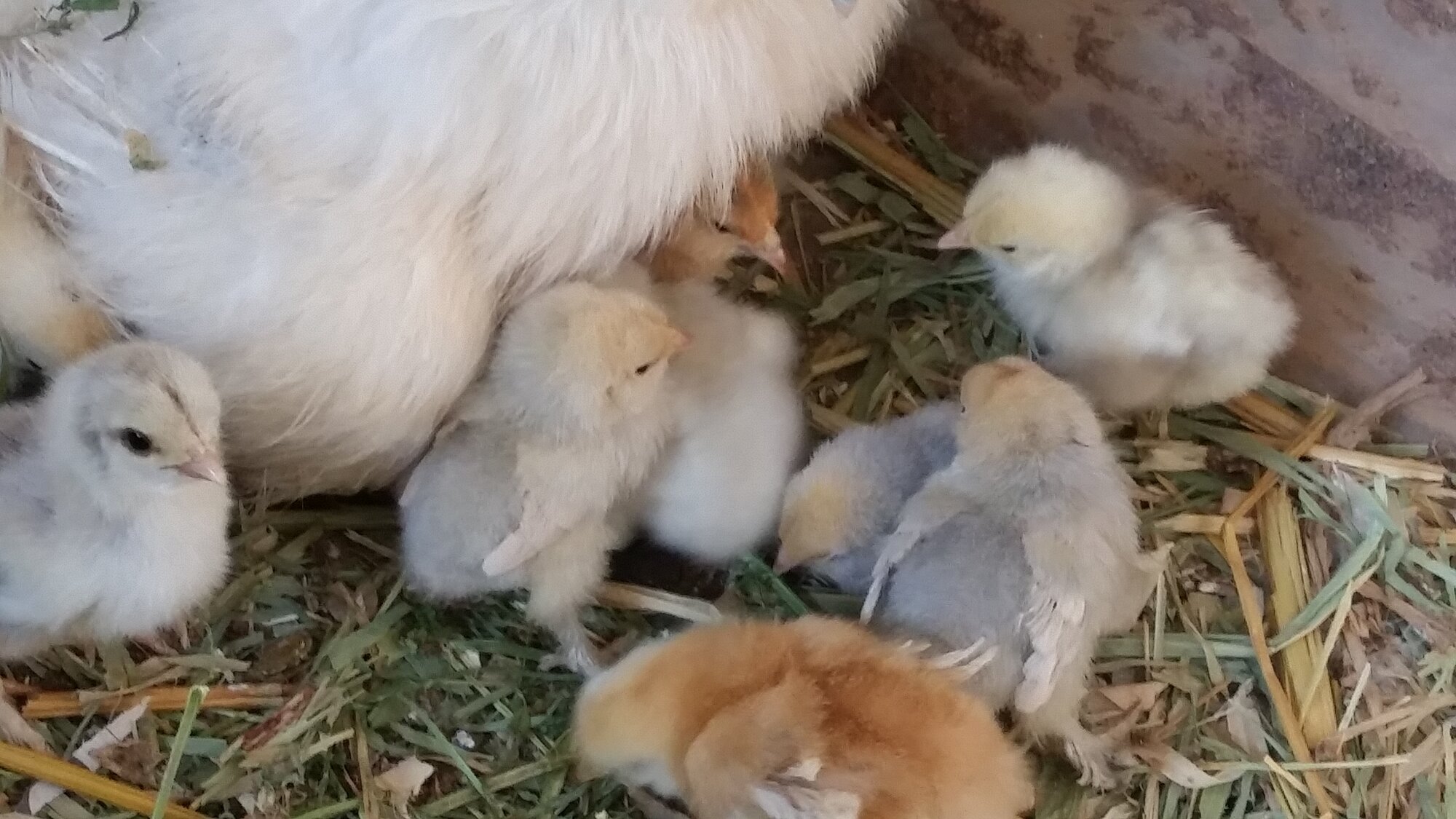 They are so darn cute but i dont want to keep anu porcelain duccles. I'll have to stop being cheap and order by breed not mixed! If someone has a reason they think any coukd be a cochin please say! 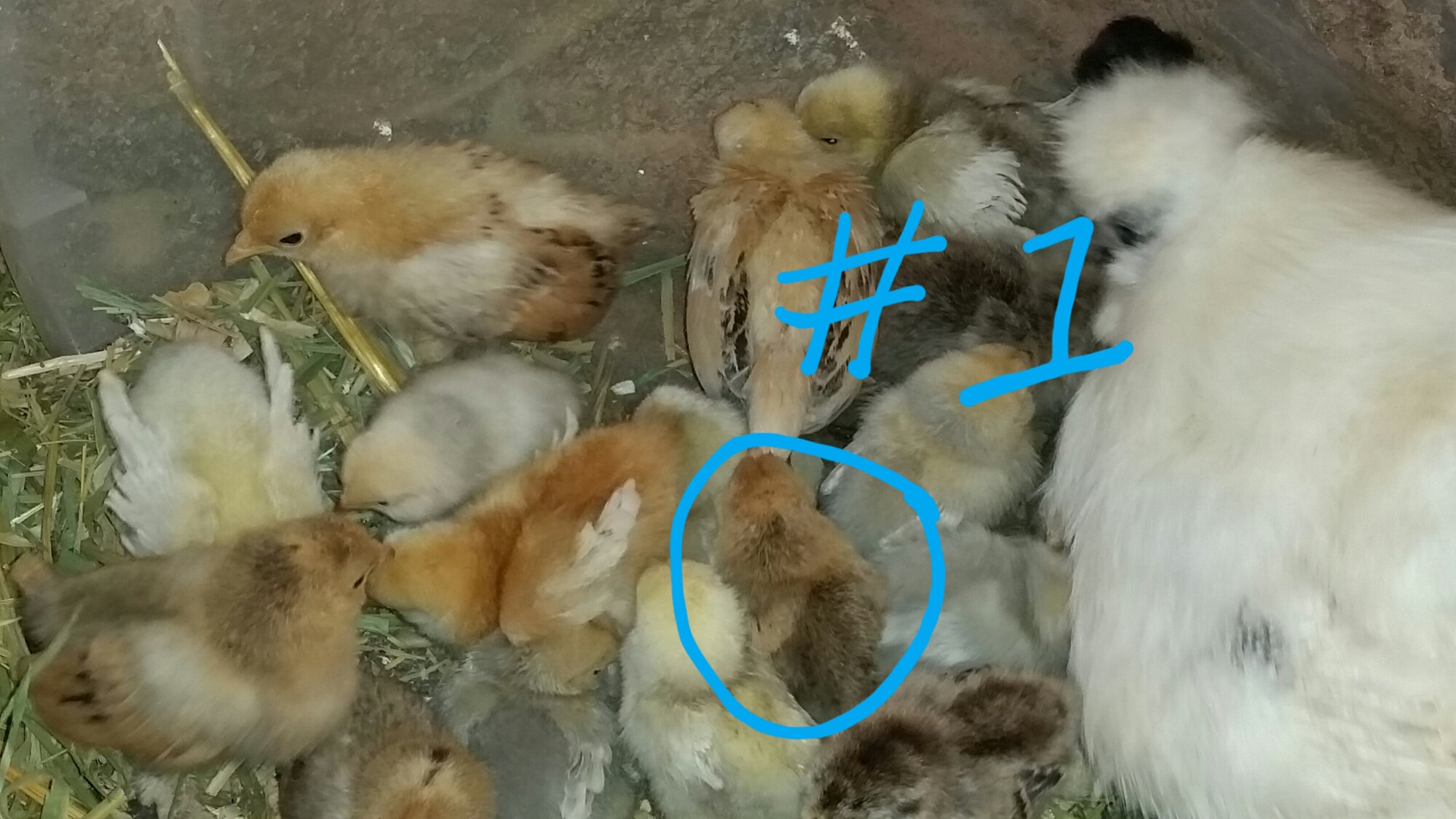 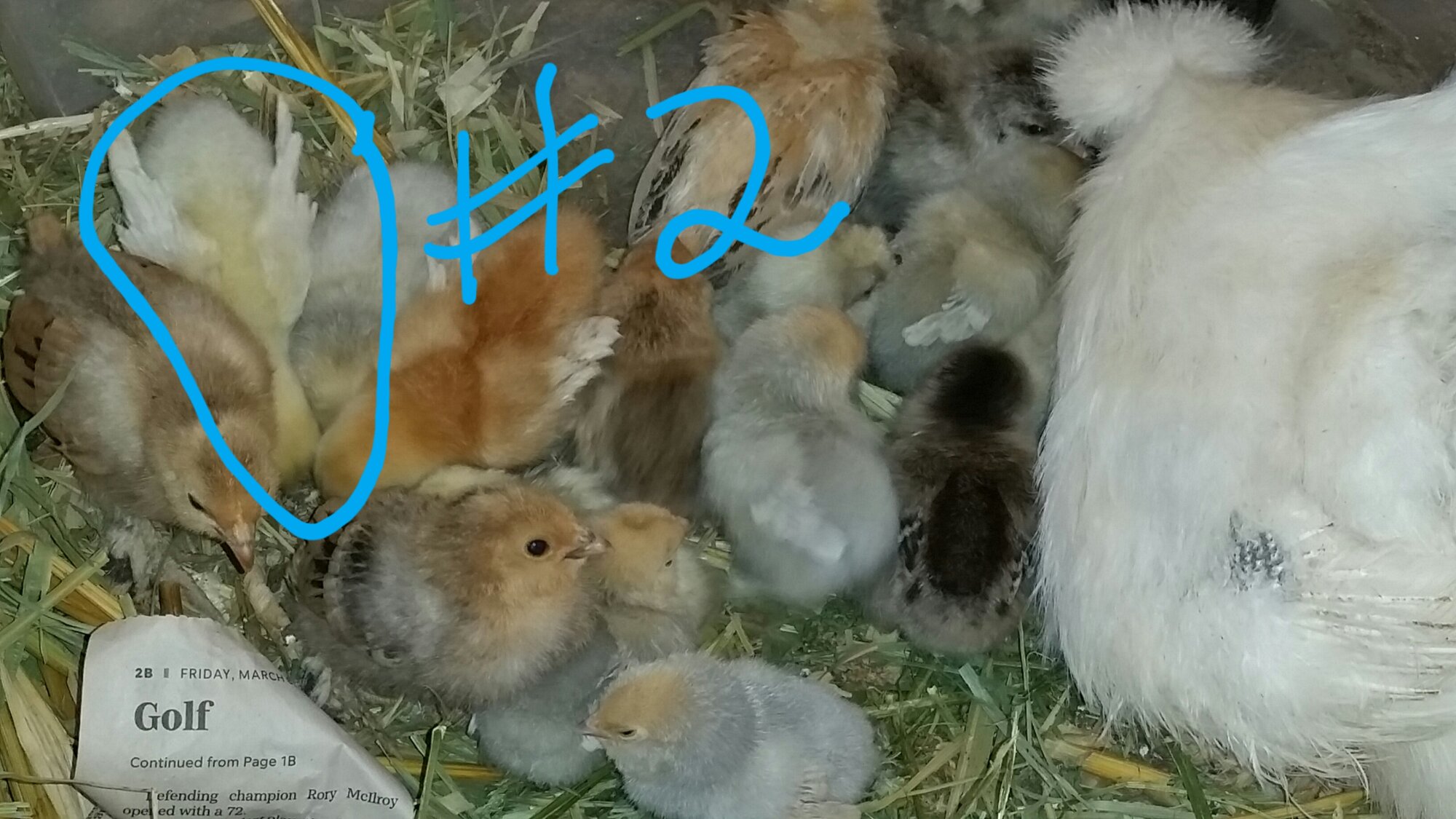 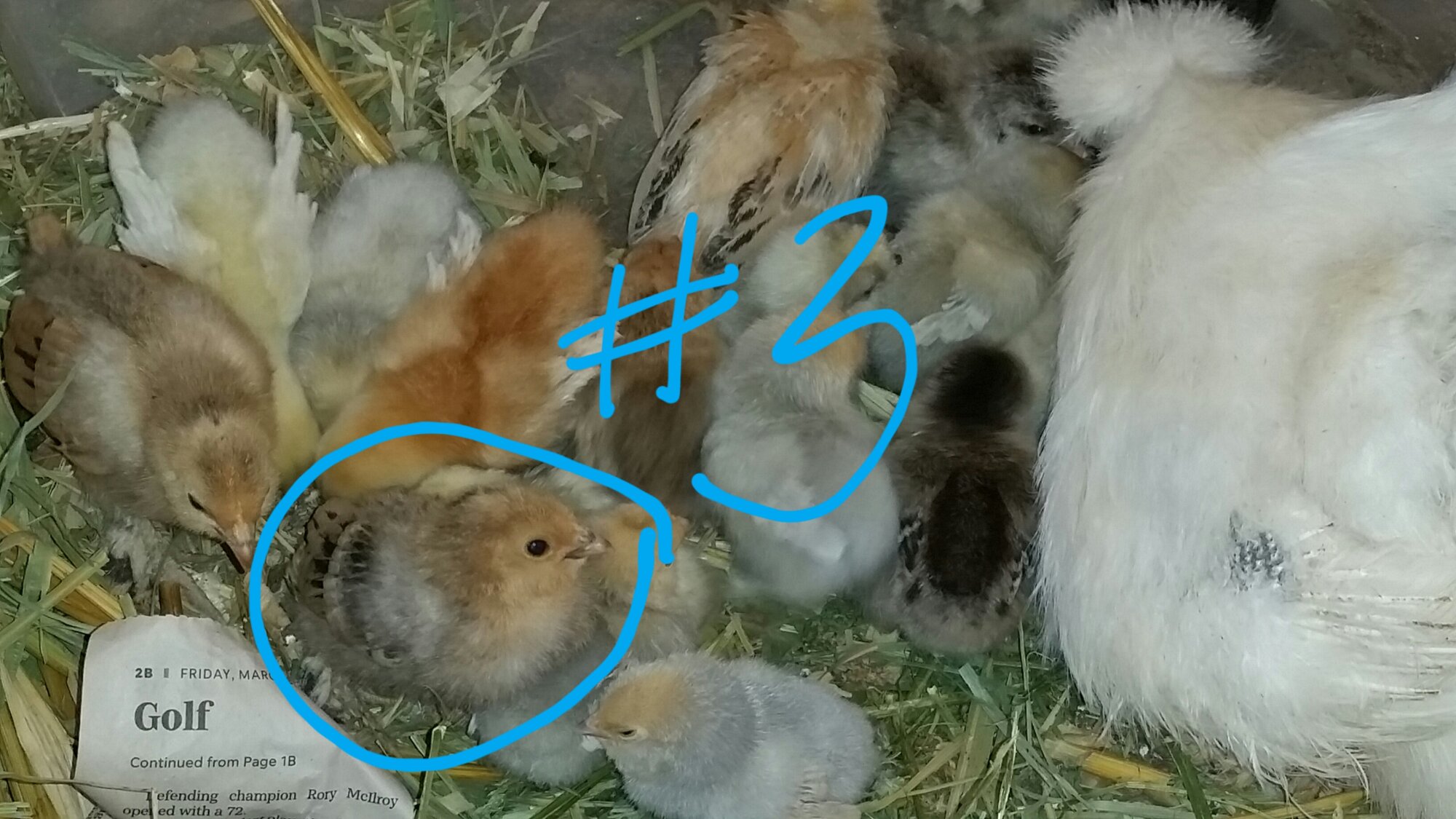 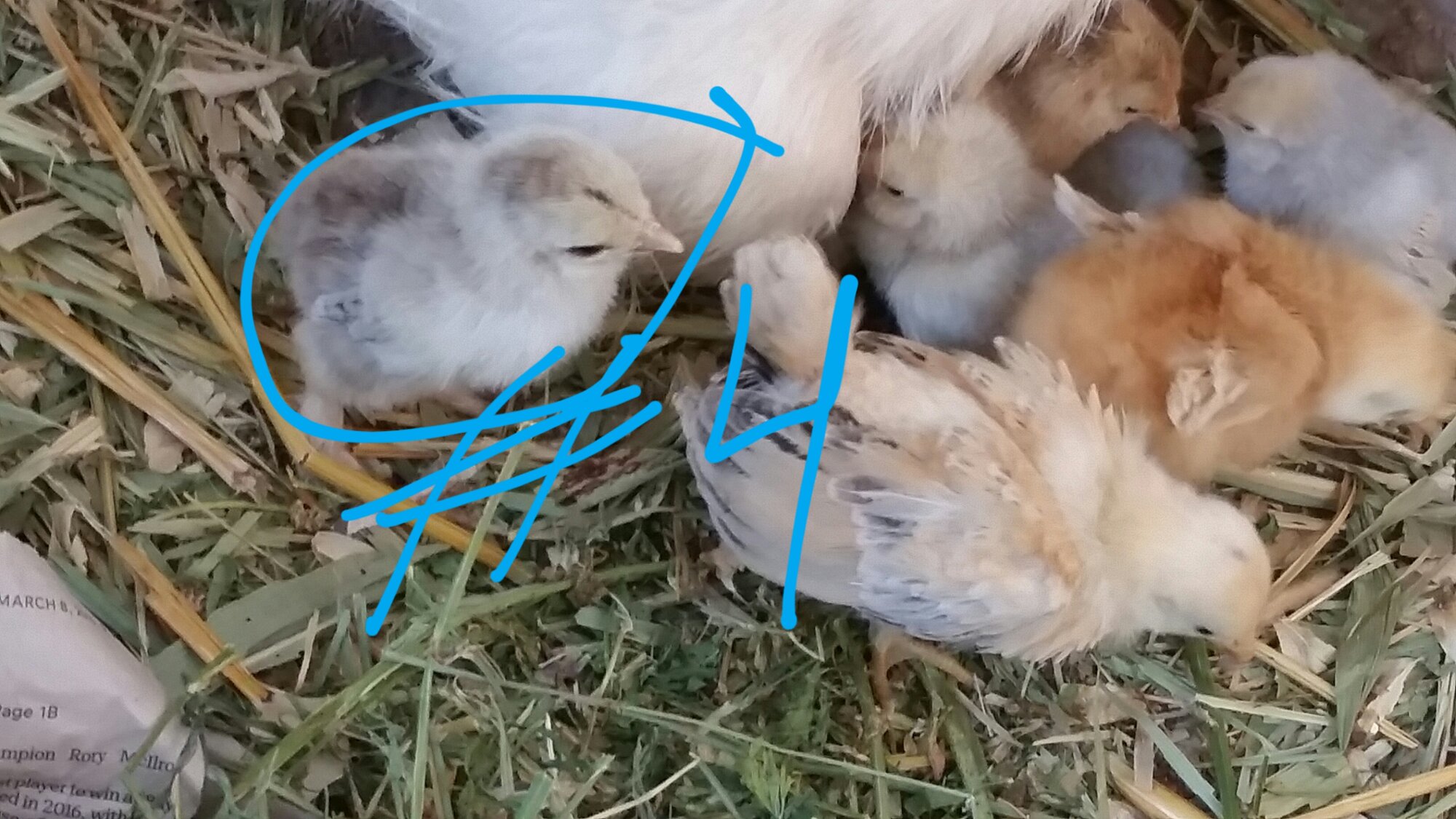 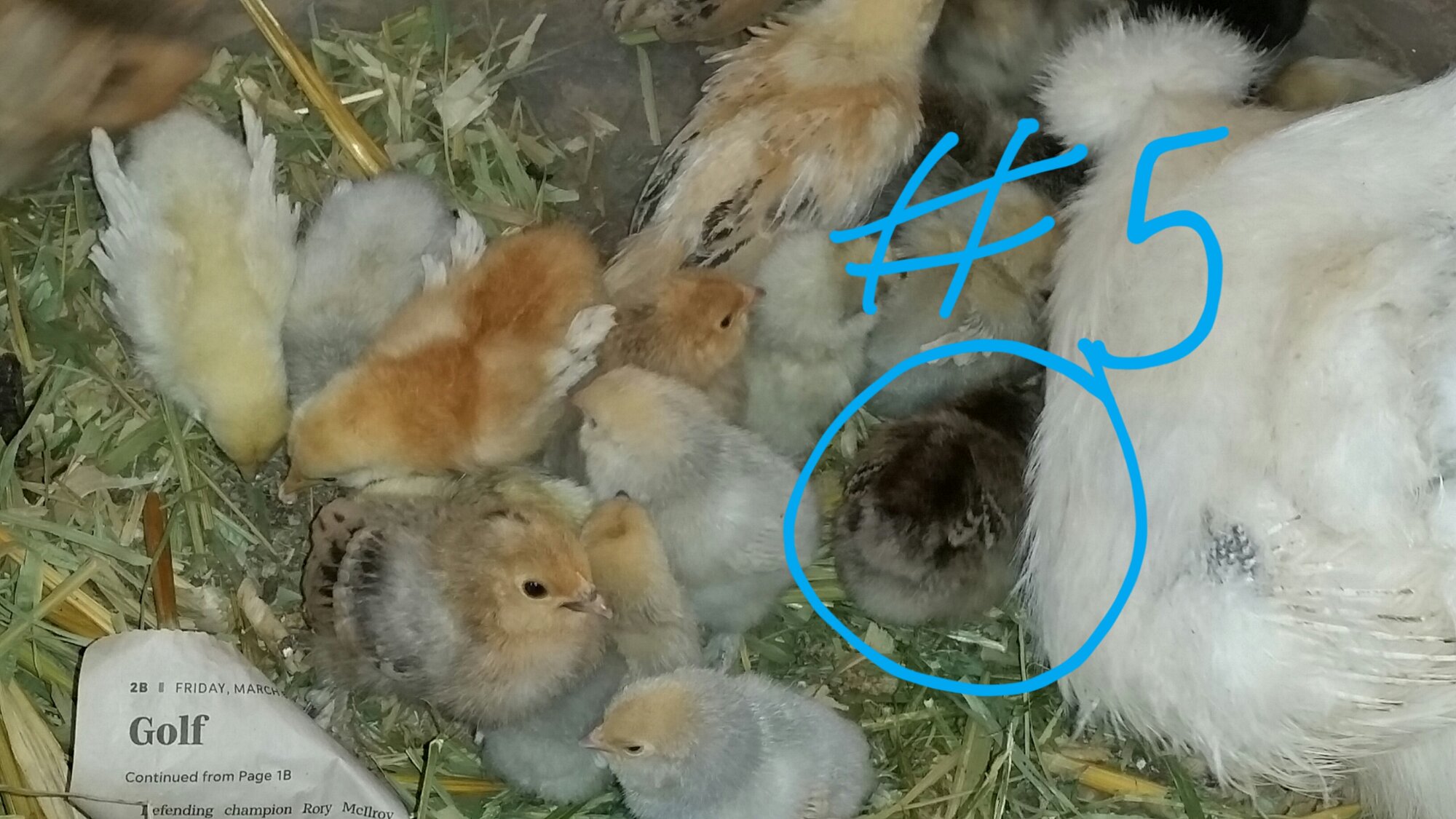 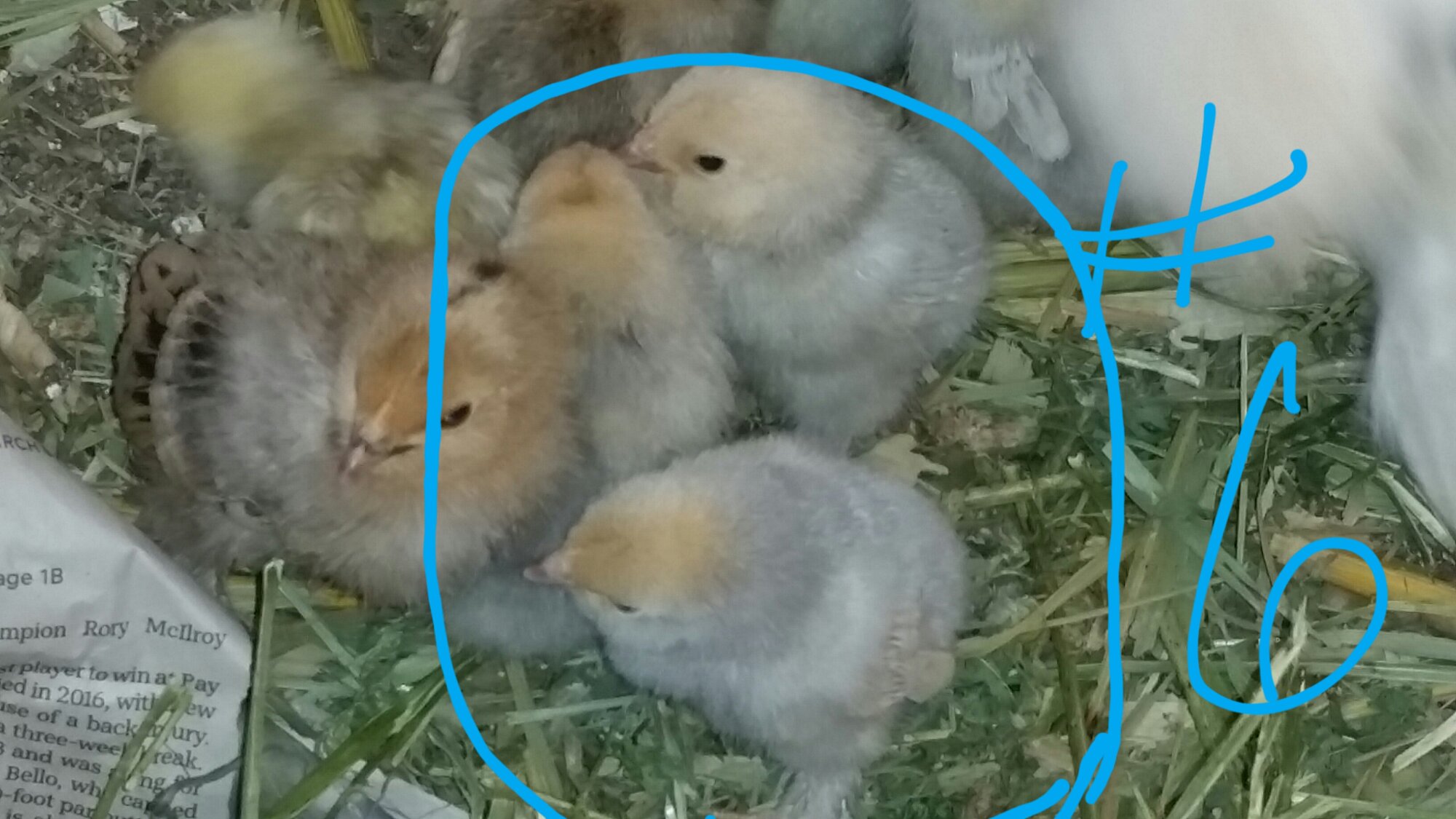 1 and 3 I think are Mille Fleur d’Uccles.

6 are all porcelain d’Uccles. You also have at least one white smooth Cochin.

Did you order Japanese separately? There does seem to be one Japanese chick but Japanese bantams don’t have feathered legs.

bantamsrmyfav said:
Did you order Japanese separately? There does seem to be one Japanese chick but Japanese bantams don’t have feathered legs.
Click to expand...

2 smooth legs were included, just extras put in, and they are already having little long tails theyve been raising, so im pretty sure they are japanese bantams

6 are all porcelain d’Uccles. You also have at least one white smooth Cochin.
Click to expand...

Thanks! #5 is not a silkie even I can tell silkies apart with their black legs ans extra feet

i think you're right too, the white ones feathers are already turning up today.
You said you think theres a smooth cochin? So its the one who doesnt look like the du'ccles, the du'ccles have beards coming in a little more noticable now.
My silkie hen is taking care of al of them so good, easiest chicks I've ever brooded! No worrying either. Ive only lost 1 that i think was a du'ccle that was very weak when it got here.

Then it is probably a partridge Cochin

bantamsrmyfav said:
Then it is probably a partridge Cochin

Yes the white and grey chick to the left of number 1 might be a smooth white Cochin
Click to expand...

Today I can tell who is the smooth white cochin, and for sure i have 1 white frizzle, 1 blue frizzle, 1 red frizzle, 6 or 7 porcelain duccles, 2 cochins that are something, partridge or penciled... im very excited about them! Then 1 mille fleur duccle and 2 that i think must be brahmas.
Thanks for the help, it helped me alot to tell them apart, i could really only be sure of the frizzles on my own haha!

So aside from the way too many porcelains im very happy with this mix! Ive had porcelain duccles before and for some reason my other bantams picked on them terrible. I tried both my smooth leg and feathered legged flocks and everything was bent on kiling them! But i found them a good home with an older lady who didnt have other birds. They were sweet birds but strange, they wouldn't stick up for themselves or even run away when getting beat up! So im wondering if it's a breed thing? I had 2 hens and a roo, all 3 were like that but especially the 2 hens.
My other mille fleur duccle i had before (a roo) was not timid in the slightest though. He got butchered in fact for being terribly aggressive!
You must log in or register to reply here.
Share:
Reddit Pinterest Tumblr WhatsApp Email Link