Production red not acting right or preening herself ::::UPDATED::::

I bought this PR at our local feed store as a chick along with two ee's and a barred rock. The PR has never been 'normal'. She seems to have something wrong with her. Maybe shipping was hard and now she has brain damage...I don't know. I just know she is slow to notice things, cannot roost on a pole, or fly up to the roost. She also doesn't appear to be cleaning her feathers. they are very dull and brittle. Does anyone have any ideas as to how I could help her keep her feathers looking better? She look pretty rough lol. 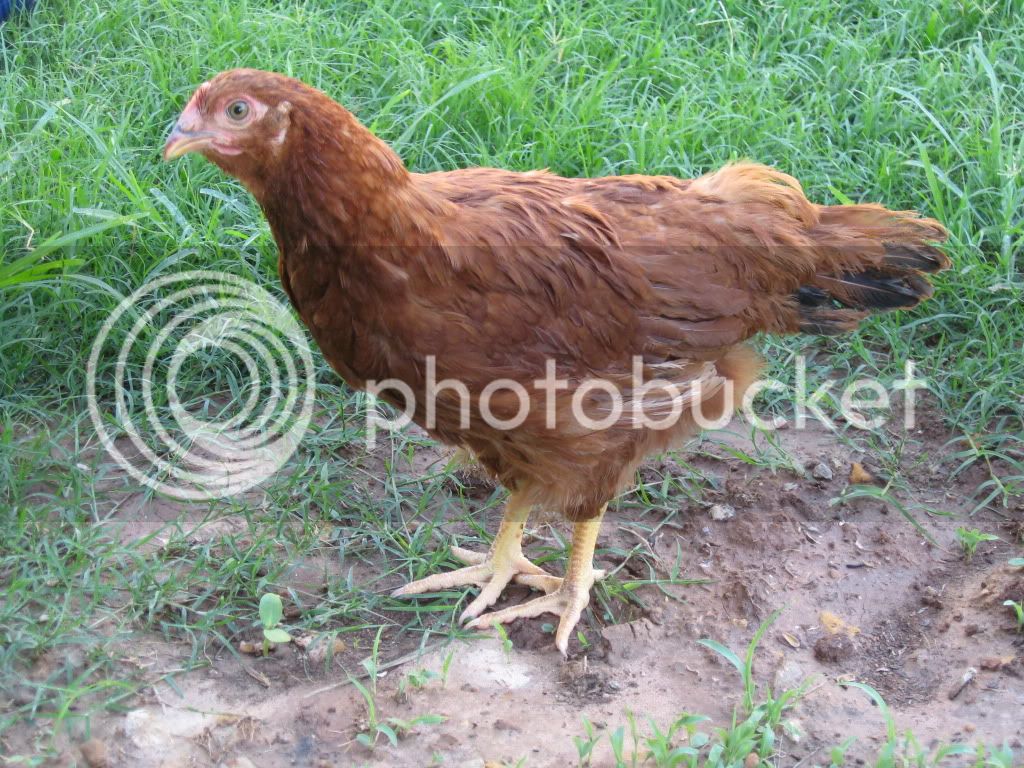 I've heard buttermilk helps with their feathers, gets them nice and shiny. I bought some today and I'm going to make my hens a pot of plain white rice and pour buttermilk in it and let them scoff it up. Do you think she might have worms? If she has an infestation, you might be able to see some in her poop,otherwise you wont see them.

No worms, lice, mites, nothing. Shes just weird I guess lol. the other 3 are perfectly healthy....knock on wood....

hm I haven't ever heard of that, learn something here everyday I swear! I will have to go and buy some buttermilk tomorrow and see if she likes it.

Yeah, I think it was in one of Pine Groves posts awhile back about the buttermilk, so I have to give him the credit lol. Good luck.

Maybe it's just the pose, but does that left leg look like it's turning in...um...pigeon-toed?

yeah she walks really funny. She seems to have some neurological problems. when she walks her head wobbles and she trips alot. I've tried putting her on the roost at night but she just falls down

Several of those symptoms point to Marek's Disease:

One form of Marek's causes lesions on the brain (like sores, small cancers). This, of course, effects brain function. Some of the early symptoms of the disease have been described as a chicken that walks like it's drunk, or has 1 lame/paralyzed leg, or was fine 1 day and the next day paralyzed and unable to walk. The fact that your bird walks oddly, has that turned-in foot, and is unable to roost (can't jump and can't hang on when you put her on the roost) - all these suggest Marek's to me.

The mental slowness could be explained with Marek's, too. It could, indeed, be brain damage as you suggested.

Lastly, the unkempt condition of her feathers. Marek's also causes tumors both on the skin and internally that interfere with organ function. If the liver or kidneys are effected, I would think it would show up in dull, brittle feathers.

This is all just guesswork and maybe your girl's problems have nothing to do with Marek's, but the symptoms sure seem to fit.
Last edited: Jun 4, 2010

well if it is Marek's, wouldn't the other pullets that she grew up with have it as well? they came from ideal hatchery, wouldn't they have been vaccinated??? She has been like this since she was a tiny chick. She eats great and everything else is fine...

Not sure if your chicks were vaccinated or not. Many hatcheries offer vaccinations, but only do it if you request it and pay extra.

As to your other birds (again, from what I read) some birds exposed to Marek's don't get sick, others die from it, still others can just go blind in one or both eyes. Additionally, the disease doesn't progress in the same way and at the same pace in every bird. If it is Marek's, your other birds could be infected, they're just not showing symptoms yet or maybe they'll be the lucky ones that don't get sick. Here's some info on the disease so you can read it for yourself. https://www.backyardchickens.com/forum/viewtopic.php?id=349905 Go to post #8 for authoritative links on Marek's.

Like I said - it's just a guess based upon the rather unusual symptoms you described. Hope I'm wrong.