Raising and Growing Our Organic and Not- So-Organic Foods

Many crops have just enough time to come in before the frost.

The gray zucchini needs only 45 days to produce,
.
radishes of course, just extra water in the summer months. Maybe plant in a semi-shade area and mulch.


still a good window of time before frosts. Here the weather changes mid AUgust, the cooling starts. But frost can be far ito the future. One year it was mid November-- very late.

Ate the first cherry tomatoes-- a golden yellow. Need to find name tag-- is it the sunsugar?? IF so NOT nearly as delish as sungolds. OTherwise lots of green tomatoes. Spend a great deal of time tying up the tomatoes-- still finishing tiying up each of three vines for each plant. some have 4 some 2. Once they are stringed up maintenance is rather easy. Just walk plant to plant twining the plant around the twine; start moving the knot further down the main line; snap off side shoots. Four plots are set up like this as an experiment. THe lowest leaves are prunned off to get air flow at ground level; any leaves showing yellowing or spots are removed.

Some varieties like yellow pear are rather vigorous; and the Better boys. These will out grow others, so Im anticipating these will eventually jump ahead in the line and start to block sun a bit for the slower growers. Will see if that works out.

Also the leaves that are between the two rows-- either cut out comopletely, or cut off half the leave. IMO lack of air flow is a problem. ANd if sunlight cant hit the leave its not working at full capacity anyway. Though all I took out were still a vibrant dark green.... so maybe Im wrong. Airflow definitely a concern, that is enough reason for me.

Collected mint for the freezer and to make new plants. Easy one to root. remove lower leaves, keeping just a few at the very top, put into glass and fill water up to leaves, but not touching leaves. At the location of the removed leaves, now under water, new roots will grow. Easy.

Emptied many of the pots growing the blue skinned potatoes-- the tops had started to die back and I needed the pots for the next go round.

Most had a few to a lot of potatoes. One had none.wth??? Trying to figure out why such variance-- may never know. Definitely the leaves use a huge amount of water as all pots had rather dry soil yet the one pot with a complete died off gone to slime tops was soaking wet. A real surprize! Potatoes definitely use a lot of water.

THe emptied pots have been replanted with Addie Blue-- should have enough time before first frost. Likely just small potatoes, and that is ok.

With first two pots dumped some weeks ago, the amount of potatoes was ok, not a super amount, and not large. Everything from marbles to small fist. Used microwave to cook and made blue potato salad for the family.

Only got 2 gal of spuds from all those pots. THey might need more time and more watering..... though all instruction say to stop watering during die off ... but maybe that doesnt apply to pots??

Pulled one row of garlic last week. BOY did I plant them deep. Spade pushed in very deep to pry them out. Rather small heads-- but maybe they are supposed to be. Need to find paperwork to Id the variety.

Then pulled the third row.

Then the died down garlic in the far garden-- gosh very tiny but in great soil that was still moist.

All bundled up and tied to dry. Hung in an old chicken coop where the breezes flow thru and shaded from the sun.

https://www.filareefarm.com/growing.html
Had to recheck instructions for when to harvest. The harvest date varies for each--ultimately it is based on the drying down of the leaves. The plant tells me when.

Will replant that main block for the summer. Summer squash seed already in the last row.

Some of the garlic still has scapes. I missed the opportunity to collect them and did a little googlig to find out how to replant them in the fall. YEAYYYYY A different style planting, easy- peasy row style and late in the fall just like planting cloves.

Pulled up all the garlic late Friday night, in the cool of the evening. Got too dark to see. Resummed the next morning, had to hurry to keep ahead of the sun as fresh garlic can apparently get burned in the sunlight with in 10 minutes. BUndled each lot and numbered and put in shed.

DH screwing up cross peices attached to the shed rafters, to the bundles can get tied up properly to dry.

Need to verify the variety of each bundle and get labels attached. Tracking varieties names seems to be difficult for me.

Planning to keep bulblets for replanting, but I do wonder how they would taste in cooking. A rather different use yet the same garlic flavor.

Garlic digging day
stepped on a bumble bee nest in the grass clippings mulch.. I left when they kept hitting my hand.. hope i didn't wreak their nest
left to right
6237A - Italian Easy Peel ECO Hardneck Rocambole Garlic
6235A - Giant Turkish Red ECO Hardneck Marbled Purple Stripe Garlic
6227A - German Extra-Hardy OG Hardneck Porcelain Garlic
and a soft neck I have had for 6 years and don't remember the name
from
Fedco Bulbs (a division of Fedco Seeds)
PO Box 520
Clinton, ME 04927
www.fedcoseeds.com 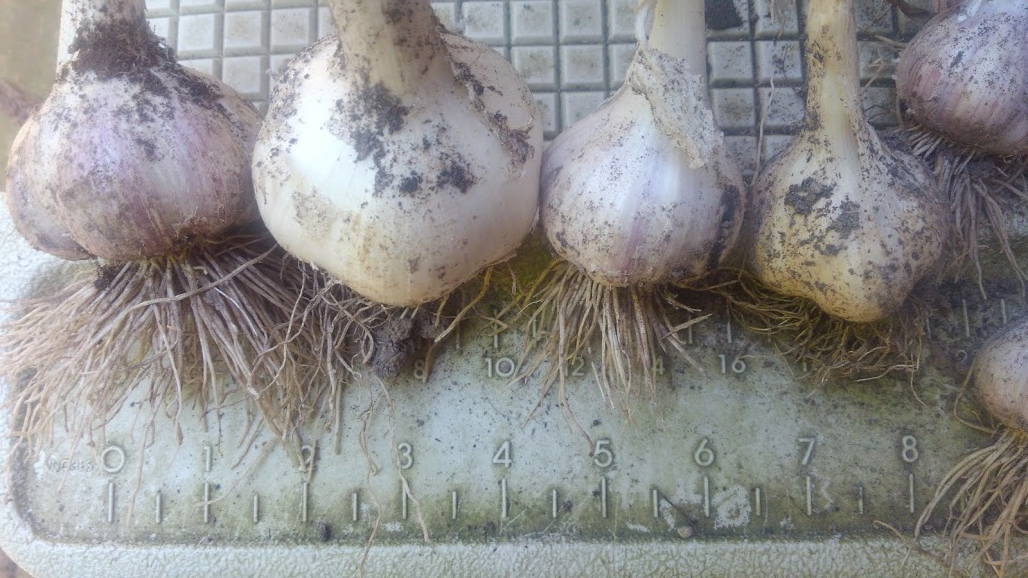 wow they are big

THe garlic tastes sooooo goood. And each is different!

Given how easy garlic is Im SHOCKED everyone isnt growing garlic!!!!

NOW is the time to order cloves.

Maine Potato Lady usually has garlic. OTherwise I ordered from Filiree in ORegon or WA, cant remember at the m oment. GREAT selection.

Have been picking beans for a while now; replanting of summer squash was a bust. Seems to young plants are more sensitive to cooler weather of early fall and wilted l ike hit with a hard frost. Oh well.

Walked thru the big field of winter squash. Spied a HUGE banana . OMG, bet it weighs 20-25 pounds. Thrilling to look at. A few butternuts here and there, wont know the total until harvested as they hide under the thick foliage.

Son has been collecting potatoes. Mostly small. He built 4 boxes for storage using a 2 x 12 for ends and cutting up a pallet for the oak sides and bottom. 12 x 14 holds more spuds than I can carry. Two are filled and in the basement.

Do to our method many are green. THose are in the first to use pile. Getting tired of prepping potatoes for the boys already. I think there is a lesson in there. TO have boiled potatoes everytday makes " what's for dinner?" an easy answer.

Tomatillos are still small; golden berries have flowers. Too short a growing season this year. Perhaps a mini green house is better for those heat loving plants.

Parsley going strong; stopped eating sorrel; new planting of peas popping up ( for greens) , tomatoes-- a great year, though a slow start. THe trellising was a big hit. Far too many plants over all as half never got support. sigh. live and learn.

Eggplant, the Little Fingers was perfect. Still producing. Again might need a mini hoop house for another few weeks as the temps are diving too low for a heat lover. The purple fruit is like a slim banana, in deep purple or purple and mauve . THese are worth growing again. I did give away many of these as I didnt try as many new recipes as I should have. Too many recipes are really suited to the very large standard black beauty type. Mostly, the eggplant was cut into coins and put into a tomato sauce or a saute as they are rather tasteless and pick up flavors rather well.

Need to get the garlic in.

It is fall, and too much to do.

The lower field of squash, potatoes and no strawberries... was hit by light frost so I coralled the boys into collecting the winter squash. They must think is it a bit fun as they didnt protest. It's like mining for gold. BUt with a machete! lol

4 supersized banana squash, and long necked butternut. Basically all are in butternut family that survived, the moshata family. THeir vine is not hollow, and becomes thick. Son held up a vine 2" thick. I tracked down the base of the plant and it was a monster vine.
Warm weather has moved back in, so that allows a few days to move the squash to a pallet for curing. many are too green, and will be good for " summer squash" for now.

PEAS are already 3-4 inches tall. Kept under fleece to prevent the chickens and ducks from eating them.

One of the tomato supports was knocked to the side by some 3 feet. Im wondering what is big enough to do this kind of damage. The are is fenced too. Makes me nervous.

Have put in the garlic. Just need to track down shallots!!

Garlic onions too, as supposedly they have a long shelve life compared to other onions. One source said they are 3-4 inches across, and in the photo they looked like a yellow onion.

Baby kale is not doing much-- just sitting there. FOrtunately the sping planting is still going strong. PErhaps older plants are more hardy6 now that the day temps have dropped to 55-65, and a rare night hits 38 but usually low 40's.

Lettuce certainly likes the fall, it is not bolting like the summer planting.

The amarant also likes the cool ness; the plants are 8 inches, and enough to pick the leaves. The bok choi is 6-8 inches depending on which plant I look at. Should have planted more!!

THe scallions are already 10 inches--- took off the fleece to let them tip upright! lol