I see these hawks around here quite often. Do I keep the chickens locked up all the time? Or should I let them out to free range and risk it? Thoughts?

Quote:
I DEFINITELY would NOT let my chickens out to free range with a red tail hawk around. It could very easily pick your chicken up and carry it off. Now a Cooper's or Sharp shinned is a different story.

Well, I free range most of the time, and we do have quite a few rthawks in our area (just watched some crows dive bombing one this afternoon). It's a risk I'm aware of. My little flock sounds the alarm when they're floating overhead and head in close to the outbuildings or they come up on our porch or go in the garage. So to me it depends on how much cover you have in your area...and maybe how observant your birds are.
The safest place for your chickens will always be in a well built covered run - no disputing that. But my chickens love roaming the property, and I love watching them out and about...

I have the red shouldered ones,and they have been diving down over my dinky run almost daily. I will probably not do free range till spring when there is cover from the bushes I planted all over. For now my bird netting will slow down the hawks enough for me to scare them away.

Red Tail hawks Unless very hungry typically dont bother chickens. If you have alot of dark colored chickens like blacks and reds you will be fine. Hawks fear crows and usually assume the darker birds are crows. Not to mention there natural diet is rabbits and rodents. Who ever said its better to free range with coopers hawks and Sharp shins is way way incorrect. Sharp shins hawks are the demons of all hawks they dont care what size the animal is they will try it. That included attacking people. As i was just stabbed by all 6 talons of a sharp shin recently.
Also you definatly might lose a bird or 2 to predators but as long as you offer your birds lots of cover they will learn when hawks are at bay and when to run and hide.
Again I am not saying a red tail wont attack I am saying you have more of a chance for a coopers hawk or sharp shin hawk to attack your flock then a red tail.

Quote:
Totally agree...I had a terrible time last year with a coopers hawk....even tho I had netting over the run he was still getting in and killing them just for sport

A female Coopers is death on the wing to chickens and much more of a threat than the red tailed hawk. 90% of the red tailed hawks diet is rodents. It will take a chicken for sure but just doesn't dwell on them. The old Blue Darter or Chicken hawk our Grand Parents spoke of was the Coopers Hawk.

Here is a Coopers in action 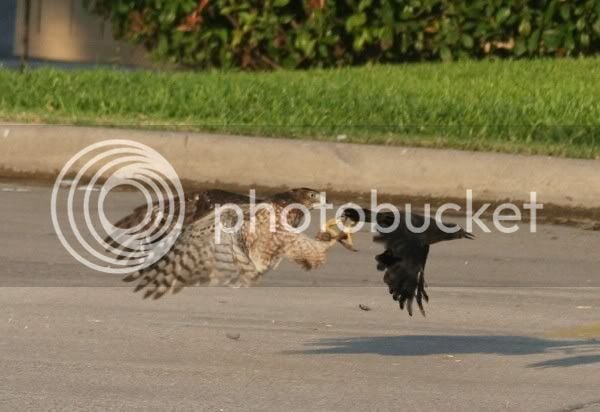 well, y'all give the red tailed hawk to much credit when it comes to not geting chickens and ducks. this happend last week. my chickens never leave the run or coop, and there are crows everywhere. my runs top is chicken wire and it tends to bow in some places leaving "holes". that hawk jumped down the holes into my run and ate my female mallard duck. DON'T LET YOUR CHICKENS OUT IF YOU HAVE A RED TAILED HAWK PROBLEM, IF THEY SEE AN EASY MEAL THEY WILL TAKE IT!!!!

btw: why are they commonly called chicicken hawks, if their diet is 90% rodents?

Quote:
WOW!! What an incredible Photo...

Quote:
Chicken hawks are called coopers hawls and there diet is 90% what ever it can kill or thinks it can kill. and everyone suggested that a red tail would eat a chicken if it were hungry enough. IMO its posters like these who scare new chicken owners into letting there birds enjoy the wonderful life. If a hawk got into your ""Covered run and coop"" it appears to me you need to do some more work on your coop. No one said anything about ducks either a red tails actual diet is Ducks, geese, Turkeys, Poultry, Rodents, and Rabbits, You dont see chickens in the wild but you do see ducks so if a hawk saw your duck and had access to it its just doing what nature has it to do. with that being said. I will try to state this as clear as possible. You have more to worry about from a sharp shin hawk or a Coopers hawk then you do a red tail. I have red tails all over my land and in all the years I have had 1 attempt to get a chicken. In that same time frame I have had 4 sharp shins kill birds. one flew right over my shoulder I thought it was a barred rock chick. and Killed my guinea, then flew up in the air and dive bombed my hen house coop. that ended badly for the hawk as my black aussie and Barred rock roo made quick work of the little fella and he flew away never looking back. Just a week ago or so a sharp shin attacked and killed a silkie hen. when I discovered the dead bird and went to retrieve it it flew out of the coop (the hawk) and attacked me.
I think the only point was if its hungry enough it will try anything. But if its on a typical feed schedule and food isnt in a shortage they would rather not bother with tons of birds. However Juvinile Birds are 100% trouble. what ever the breed.