I hatched 15 chicks over the weekend. On Sunday, one began sleeping on its head--like a cartoon ostrich with its head in the sand. By Monday afternoon, its head was curled under so that it was leaning against the base of the skull. By this evening, it had its head curled under sharply enough that it was turning somersaults every so often. At that point, I noticed a second chick sleeping on its head. It is now 10 p.m. and the first chick is turning somersaults rapidly (with rest breaks), while the second chick is turning somersaults sporadically. Holding the chicks makes no difference. When startled, they run backwards like a crayfish. They hold their eyes tightly closed but are able to open them if they want to. Their stools are normal and they appear to be in perfect health otherwise, but they will no doubt die of dehydration/starvation at this rate. Their behavior was ordinary for the first 24 hours after hatching. My husband is calling it Rollover Syndrome.

I don't know a lot about birds in general, and am totally inexperienced with avian disease. Has anyone seen anything like this before? I'm very worried that this may be contagious since two of them are behaving this way now. While these are Button Quail, I'm hoping for advice from chicken owners, because there just aren't enough quail breeders to offer help with something this...odd.

I started raising Button Quail early this summer, and this is a second generation incubator hatch, the approximately 5th total hatch. I have 10 healthy adults and 6 Texas A&M White quail. We had 5 chickens this Spring which were killed by predators, but otherwise, no domestic birds have been kept on this property for at least 60 years. If this is a communicable disease, this is the first time I have seen it in our flock. The gamebird feed is a new bag purchased 3 weeks ago, from which I raised a separate group of chicks without problems.

Here are the photos... 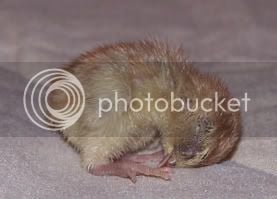 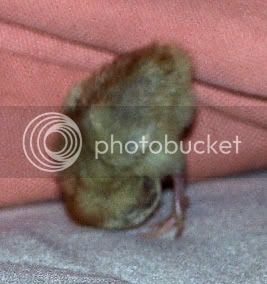 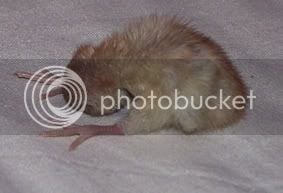 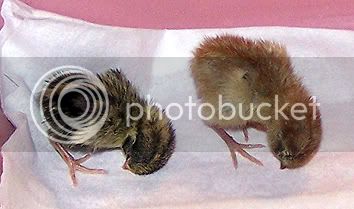 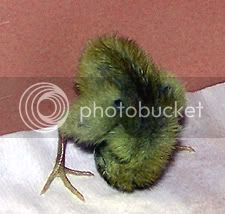 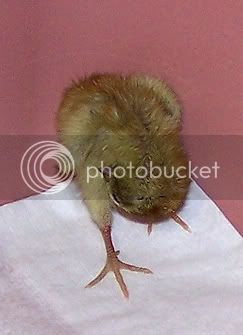 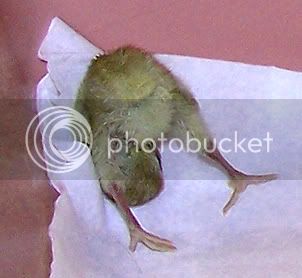 *Bump* cos it's just so pitiful : (
Surely someone has ideas what could cause this?

Get some Poly-Vi-Sol without iron into them. That's really the only thing you can do for such young chicks. If they don't show signs of improvement in the next week I would consider culling. Sorry I don't have any better answers.

This looks like Wry neck only backwards. Definitely give them poly-vi-sol without iron ASAP. I hope they make it.

Thanks for the suggestions. I started them all on the bird vitamins last night. I ended up culling the two chicks in the photos because it was too heartbreaking watching them wildly flipping and rolling around the brooder like they had been stung by a bee. I hope I made the right choice since I don't know for sure whether they were in pain, but the spasmodic somersaults really made them look like they were suffering. I'm hoping that the other 13 chicks won't end up with...whatever this was. I haven't learned yet whether it is contagious as I had feared.

A couple of people on the quail forum also suggested wry neck. It is hard to find good photographic examples of this in chicks, so I really can't say one way or the other. Does wry neck start out as a behavior? The chicks just seemed to prefer sleeping on their heads at first, but the disease finally progressed to the violent somersaulting after about 24 hours. I noticed that wry neck is called by many names, including torticollis. We have a special needs daughter who had torticollis for the first several months of life. (Her neck was rigid so that her head was always turned to the right.) With physical therapy, she made a full recovery...but her condition didn't even remotely resemble what the chicks had. Their necks weren't at all stiff, just convulsively (or compulsively, I'm not really sure) tucked under their bodies.

i know this is an old blog, but i have just experienced the "rollover syndrome" with my jap quails.just 1 in particular.
so googling brought me here trying to figure out what went wrong where??

a few problems during incubation that i had, as its mid winter here in south africa and i live in the drakensberg region.
my d.i.y. fridge incubator has been battling to keep a constant temp. it was ranging from 35.6 degrees to 39.8.
so a big temp variance.
my humidity was low......30%-40%
i went to durban for a few day, and forgot to leave my house keys behind for my brother , who normally turns then 2 time a day.
so for 3 days during incubation.....day 11, 12 and 13 my eggs were not turned

i initially set 30 eggs at 11pm, 23 were locked down on day 15 at 11pm, humidity was set to70%,
day 17....nothing!!..normally my other batches hatched on the hour 11pm .
day 18.nothing!!!.......worry was setting in.
day19.......nothing again!!....i was pretty sure they were d.i.s. by now and was seriously considering dumping them.
i took them out, candled them again.....at 7pm...they were all very dark in the shell and looked normal.
i replaced them in the hatching section of my bator., extremely worried with just a little hope that they would hatch.

so i messed with the entire incubation process and got delayed hatches and the roly poly chick.
lucky me that its just 1 chick.