Roo driving hens out of the flock.

A couple weeks ago, I saw my roo and lead hen chasing anther hen all over the yard, and just attacking her mercilessly. The roo was not mating her, just pecking and kicking her. The poor girl lost all the feathers from the top of her head and back of neck, and got bloodied comb and other bleeding sores in that area. I could not figure out what the problem was, and I ended up selling her for her own protection.

So, I figured with that hen gone, things would be smooth again, but NO. Next the rooster went after the lead hen (the same one that had been attacking the other hen with him). He goes after her in the same way. Chases her all around until he gets her pinned down, then just attacks her repeatedly (without mating), pulling out her feathers, pecking, kicking, etc. Lets her up, then does it all over again! He has effectively driven her out of the flock.

Why is he doing this?! Is it cannibalistic behavior? Is he "culling" her from the flock for some reason? She is a great hen. Lead hen, very healthy and feisty, and a great layer. I don't understand this roo's behavior! I wish I had not got rid of that first hen that was being attacked, but wish I'd ousted this rooster instead. I am getting rid of him ASAP, but would still like to understand the behavior in case it happens with another roo in the future. I've had several other roosters and never had this problem before.

Thanks in advance!
Shannon

i honestly have no idea. Roosters generally only fight with other roosters. But getting rid of him seems like the best thing to do. Sounds like he's gone bonkers.

Some roosters can get aggressive when a hen won't submit and let him breed with them. I think it's a good idea to get rid of the rooster. I've had several roosters and only two I had did the same thing. When I seen it they removed from the flock right then.

Bizarre behavior. I cannot fathom why he would be doing it unless these girls were challenging his authority. Time to get a new roo, I'd say.

Thanks for your responses! It confirms my suspicion that this roo is just a psychopath. Both of these hens have been laying fertile eggs since he matured, so I know they been letting him do his thing. Of course now she sees him and RUNS.

I've had him listed on CL for quite some time now, but may have to explore...OTHER options.

While waiting for a CL response, I would like to recommend separating him from the flock before he seriously hurts another hen. He'd make great chicken stock.

Thanks, I ended up killing him yesterday and made a buffalo chicken dip.

I had almost exactly the same problem two weeks ago. My rooster chased my hen off for no apparent reason. I gave it a few days, hoping they would work it out, and one morning I went out and he had ripped her head open really badly....at least I assume it was him. I removed her for her safety and healing, and killed the rooster. I feel better knowing I am not the only one who had to do this. No one had any ideas about why my rooster would suddenly reject a hen, and I wondered if I did the right thing. Now I think I did.
The one thing I did watch tho, was to see if she was broody. Some people said that could be why she was avoiding him. She did not appear to be broody after a couple of days tho, and then he ripped her head open.
So sorry you had to deal with this too!

It made me sad to have to kill my beautiful rooster, but I guess I can always try again with another rooster.

Out of curiosity, what breed was our rooster? Mine was a Splash Ameraucana, around 7 mos old. Nice looking guy too...I was not sad to see him go though. I was incredibly frustrated by this problem! I'm sure my hens are much happier. The one he was attacking was one of my favorites. I sure wish I hadn't got rid of the first hen he did it to. 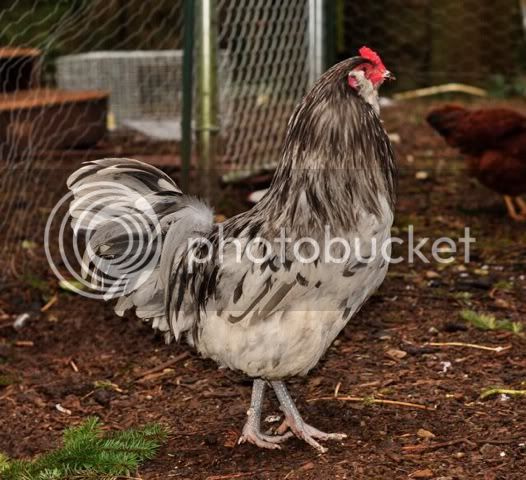 I had this problem last year. The roo was picky. his counterpart was killed defending his hens. There were two free range flocks. after the death of Hank (his counterpart), i assumed that Hank's hens would join Junior (the picky one). Junior wouldn't let them join his harem. So i let his son grow up, and killed junior. his son is taking care of all the hens. I think it had something to do with the hens being associated with another rooster.

B
Hen in Time Out

A
Hen fighting with rooster