Rooster With Infected Cut On Leg

I have a rooster who cut himself pretty good on the leg somewhere in the coop. It got infected about a week or 2 later. I noticed this, and cleaned it with hydrogen peroxide and warm soapy water the first couple days, and put some regular, safe-for-chickens antibiotic ointment on it (with a wrap to keep it clean). I have been doing this once a day for a week.

I researched and got mixed reviews about the hydrogen peroxide killing the good bacteria, so I stopped that today (only did that once a day for a week, so I hope that didn't slow his healing too much). I am now just using warm water to clean it, and some more ointment at least once, if not 2 a day (again with clean gauze wrap to keep it clean).

However, I noticed today that, unlike the rest of the week, his comb has darkened on the top a little, but besides that he is still eating and drinking. He has a dark scab on some of his leg, but in the middle there is a yellow scab which I believe is just crusty puss. Around the wound is a little swelling and some more crusty puss.

I can update with a picture and more on how he is doing tomorrow when I re-dress his wound, but wondering if there is anything I can do to make him more comfortable??? Never had this happen to a chicken before despite having them for so long.

Peroxide mainly prevents wounds from healing, and I have used it briefly on dirty wounds to clean them. We sometimes need to see pictures of the wound to help the best, so try to get one in the morning if you can. I would consider doing a long soak in warm Epsom salts to his legs to try and bring the infection to the surface, soften the scab, so that it can be squeezed out. You could also use Hibiclens or Betadine for the soak, and keep him in as long as you can, up to 30 minutes, possibly while watching the tube. If a vet is possible, they could clean his leg and give him an oral antibiotic to help clear the infection. Does he seem that sick from this wound that he would have his comb turning dark, or is that just stress. Is it affecting him getting to food and water?
S

Hi again, update for my rooster. Thank you again Eggcessive, I took some of your advice and stopped peroxide on the same day as I posted my concerns. I have also been keeping it clean with ointment and a breathable wrap (changing it pretty much every day). It has been over a week now, and his comb is back to normal (probably dehydrated at the time). As for his wound, the black dead scab with the yellow has mostly fallen off on it's own to show healthy skin. He is eating and looking healthy besides the fact that around his wound is still swollen and a little pink. He has definitely improved though, and is would isn't leaking puss or anything like that. I am not sure if his infection is over? or is it still look like it needs extra assistance to heal?

Also, I don't know if you can see it, but since the cut was on his leg, when the scab fell off a little bone is peaking through. I believe the tissue has started to heal over it, but wanted to check. 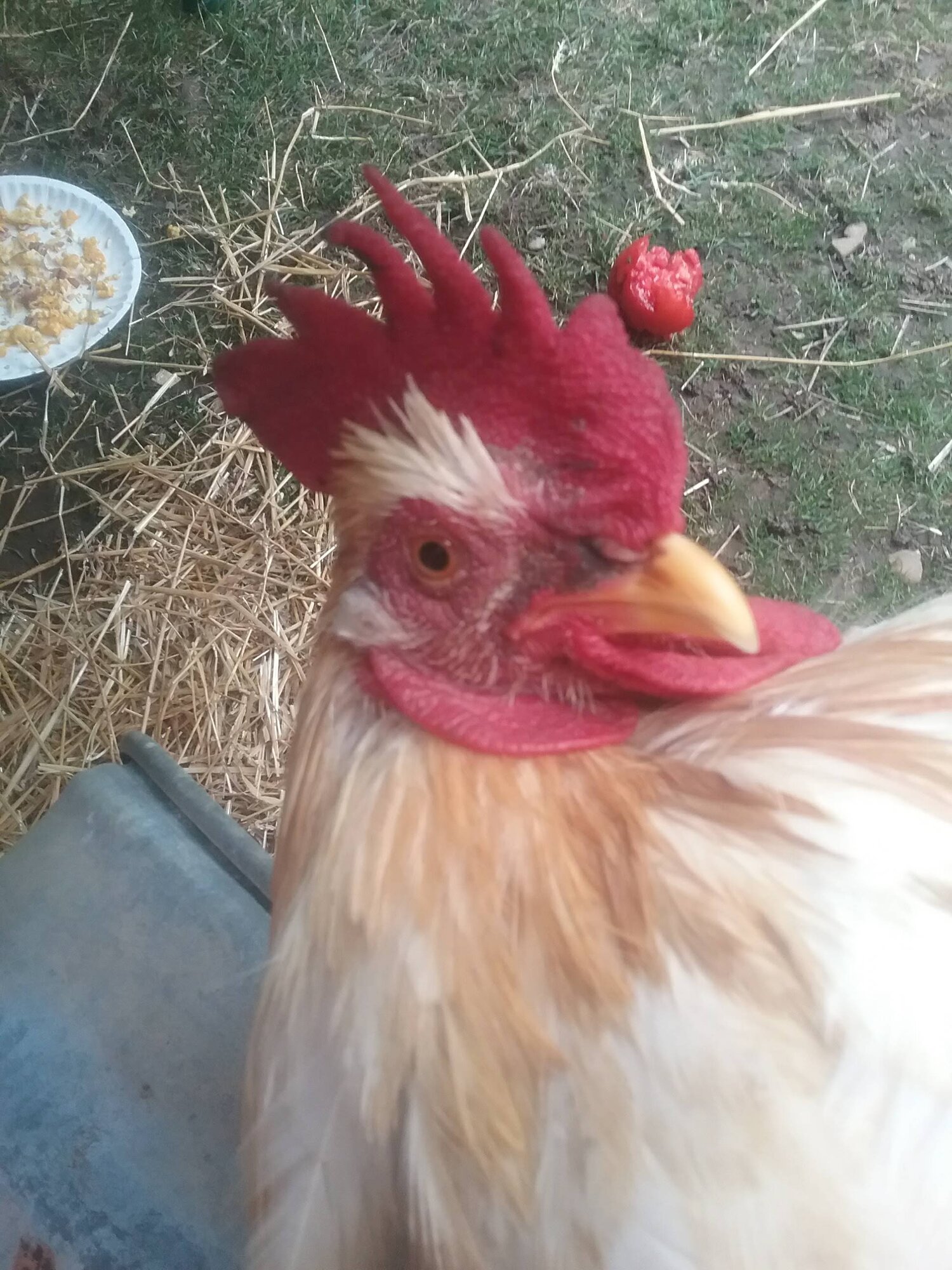 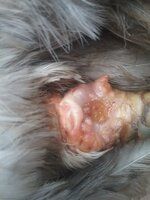 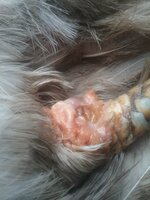 Glad to hear that he is looking better. I would continue to clean the wound and possibly use Hibiclens (chlorhexidene) and water or betadine, or saline, and apply the antibiotic ointment. Hopefully the wound will start to granulate in and heal. Let us know how he gets along.
S

Thank you for the advice. I will continue to apply ointment and wash it with saline. If it doesn't get better or worse, I will take him to a vet.
S

Update: I found a vet finally who could look at him, this Thursday, that is only 20 minutes away (had to call several and do some research)! They are just going to check if he is healing normally, and if his leg is going to able to function soon. Thanks again for all the love for Carlos, it has been a rough couple of weeks for him.

Let us know what the vet says, and glad that you found one who could see him.
S

This is an update several months--to almost a year later on my rooster. He is still alive and kicking as the infection has long passed and is all healed! However, since the infection and healing process took so long, it seems like he can't move his joint anymore. This wasn't a problem for him as he just hopped on one leg to get around at first. However, since he can't bend the leg, he lays on it pretty awkwardly by sticking it out behind him. As a result, I think it has been causing him pain as of late by the constant pressure on the backs of his toes (his toes are curled back and even have some swelling and a little dead tissue on the top from putting constant pressure on them). While he has been very sluggish the past few months and almost depressed looking, he still eats and drinks plenty.

At this point, I don't think he will be able to use the leg or ever be reintroduced to the larger flock anytime in the future. I have a gentle old blind hen with him that they keep each other company. I know some chickens can survive with only one leg, but he isn't taking this well. I am worried that just by living he is in pain all the time from the way he lays down.

Should I leave him in this state and try to make him as comfortable as possible, or is there another solution anyone can offer? At this point, I don't think I could afford a vet bill for if they amputated his leg or had a more extreme solution.

If it seems like there is nothing else I can do, would it be more humane to put him down? I really want that as a last resort, but I wanted to ask for other opinions and see if anyone else had to make a similar decision. I want to make sure I am making a decision that is best for him, not me.

Sorry that you rooster is not able to use his healed leg. Do you have any pictures of him now or his leg and foot? Have you ever looked at chicken slings or wheelchairs that people make? That might be something to try. Does he seem to enjoy being with the older hen to keep her company? It is hard to know when it would be time to end his life, and that would be up to you. How old is he? I would consider it if he seemed to be in pain or suffering, and wasn’t eating. There are many videos and pictures of wheelchairs to look at, and chicken slings are even easier to make. 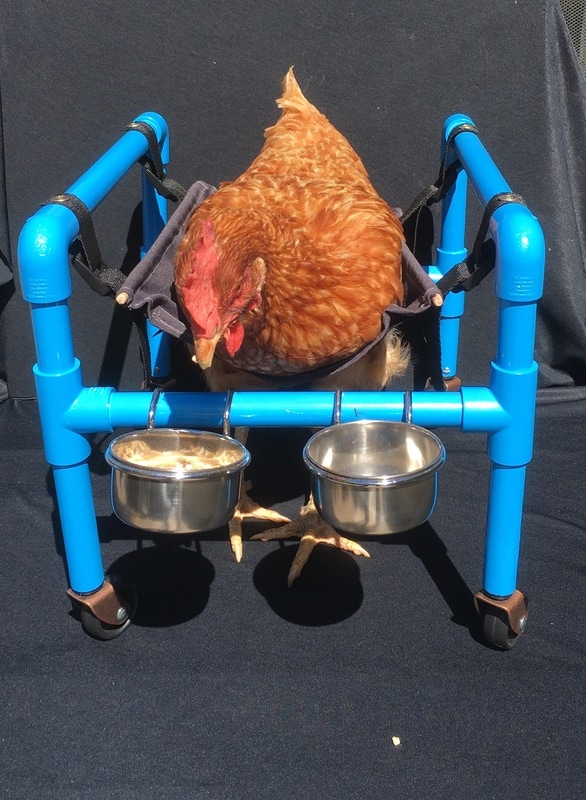 Thanks for the quick response!! I don't have any recent pictures of him, but I can take some soon. He seems to be more vocal and likes the company of the hen when she is with him, and hasn't gotten worse with her in the pen with him. He is roughly 4 years old, but I have had roosters that live all the way to 8 to 10+ years. I will research these cool chicken wheelchairs some more and see what I can create for him. Thanks again!!