Good morning everyone. This is my coop. It was existing on the property when I moved in in March. I have been renovating it. I added the brooder on the right. As you can see, it is two levels. The top floor was set up as a children's play house with open windows so I enclosed those and added the door, and replaced the somewhat open air roof with plywood and tarpaper. I will be roofing it with shingles or metal soon. I am in SW Colorado so there is almost no threat of rain. I just got it "dried in" Saturday. My question is this: The chicks lived in the brooder since I brought them outside. They segregated themselves from the hens when they had the choice between the brooder or the bottom floor of the coop. (eggcept for one of the rooster chicks and a few of his girlfriends everyone else slept in the brooder) Now that the penthouse is ready for occupation and that I've been closing the brooder door they almost all are cramming themselves into the bottom floor of the coop. I had three takers out of 17 for the penthouse last night.

How can I convince them that the penthouse is the place to be? I have some straw bedding in there and a couple roosting bars. I mean....I would sleep in there. It's pretty sweet!
....as a side note, my roosting bars are 2x2's, I've since read that I should have used 2x4's with the long side up so I will be making that change but would that be enough to discourage them?

Thanks for any input! 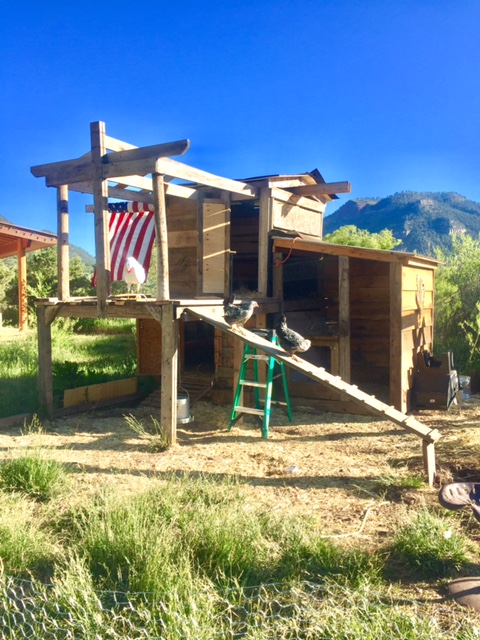 You don't necessarily have to change the roosts to 2x4's. But it might be more comfortable for the chicks as they get bigger.
How old are the chicks? How old are the hens they segregated themselves from?
In my experience, eventually all of them will get up the courage to sleep upstairs. The 3 that slept there last night will eventually convince them to join in. Or you can go out after they are sleeping and put them up there yourself. After doing that a few nights, they will get the hint.

The chicks are 15 weeks old. The hens are about two and a half years old.
The first night the penthouse was ready I placed six chicks in there manually. That must have been comical to watch as I had just watered the run to bring up the worms and it was quite muddy and I was running around slipping and sliding trying to catch them! So waiting until the they are sleeping sounds WAY better.

I've also thought maybe I'll put a second feeder up on the "porch" and maybe some treats and a swing too to hopefully encourage some curiousity of the new space.

As for the roost bars. I read that they like to sleep flat footed and that they feel more stable and safe on the wide side of a 2x4. The chicks that have been sleeping in the bottom floor with the hens either huddle together on the floor as they did in the brooder, or the rooster chick and his ladyfriend will hop up onto the top of one of the nesting boxes because there is just barely enough space for them between that and the ceiling.

Ok, I was thinking chicks, like 4-5 weeks old. 15 weeks is plenty old enough to want to sleep up high. I still say they will figure it out on their own, but placing them up there late at night will speed it up.
Some treats up on the porch will definitely get their attention too.

Hi!
The chicks are 15 weeks old. The hens are about two and a half years old.
The first night the penthouse

Dmontgomery said:
Ok, I was thinking chicks, like 4-5 weeks old. 15 weeks is plenty old enough to want to sleep up high. I still say they will figure it out on their own, but placing them up there late at night will speed it up.
Some treats up on the porch will definitely get their attention too.
Click to expand...

Ok, if I don't get any takers tonight I'll move them when they're dozing. I'll also try treats and perhaps a swing!

They were so cute marching down the ramp.

Do I need more Ventalation?

N
No built in ventilation on roof
2