Sex these EE's for me

These ones are about 7 to 8 weeks now and im havin a hard time figuring out if they are pullets or roos. the BR's that i have that are the same age are easy to tell appart. The pea comb on these EE's isn't as easy. any other thing to look or sexing advise for would be awsome. 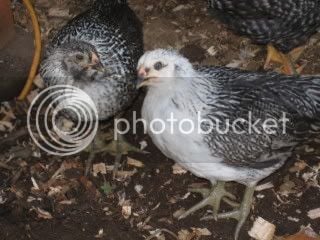 The BR in the back ground is a pullet im pretty sure. 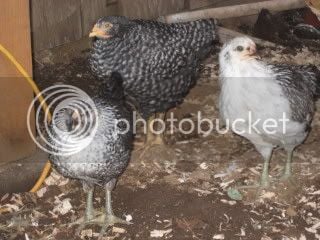 I can't tell on the darker EE, but the one with the white chest looks roo to me.

Hmmmm I'm thinking all pullets, based on combs. They don't look red, or very pronounced yet.

Based on those pics, they look like pullets, but a close up of the combs would be better to judge them.

look like pullets to me, but my barred rock roo was bought as a pullet by me, so I'm no expert.

I think sexing EE's is really difficult. I had one that was bigger than the other two, had a wider comb than the others, liked to be up high, and had more solid type coloring when she was little. Finally, at about 4 months of age, I figured out that she is a pullet.
She's now 22 weeks old, hasn't started laying yet, but is squatting for us - she's definitely female. 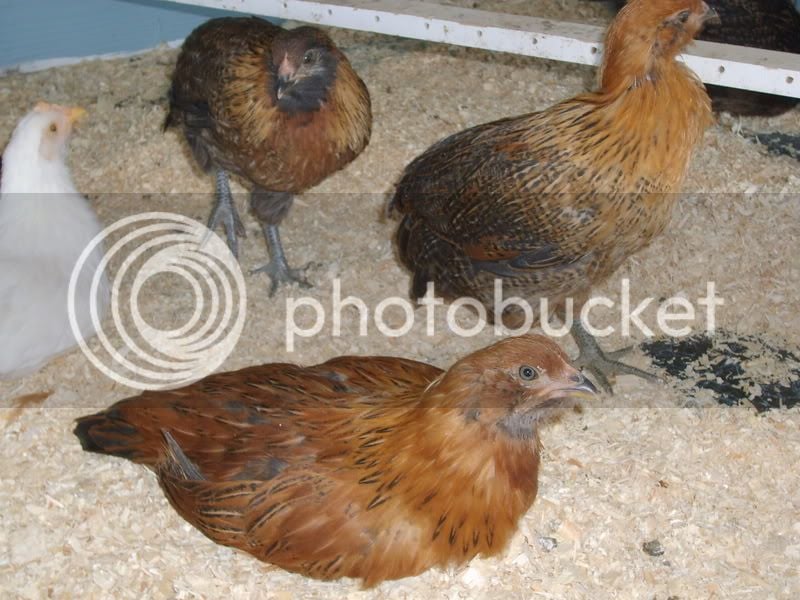 The one at the bottom is the chick that was always suspect - her coloring is now almost identical to the chick on the right (behind her) now that they are both grown. I have pictures of them as fullgrown hens on my BYC page.

This is a close-up of the suspect chick's comb, also 7-8 weeks old (comb doesn't show up well in the first photo) Does anyone have fotos of EE hens at 4-5 mos so that i know what to look for in development?

I will post some close ups of their combs, but im not sure at all what they are. I have an EE that is a month older and has a defined red comb that he was starting to develop when he was about 7-8 weeks. These EE's are the last of my chicks that i haven't been able to sex.

Since ee's are a mutt mix, it is VERY difficult to tell until they show obvious signs...like crowing, or leaving eggs.

I have 3 ee roos right now (thanks to a mixed heavy roo order the feed n seed picked up...good thing their feathers are obvious!)

They always have to figure out who's who...my girls mostly just played and scratched for food...the roos are getting serious though.


They all look the same though...just a very different activity level.

I hope this helps!

L
New to this chicken lark.