Show me your solutions for a muddy mucky chicken yard!

As can be expected the chicken yard is worn down to dirt/mud when it rains. Here in the NE, we've had a persistent pattern of rain with very few sunny days to dry anything out. I've been tossing fresh straw in the run every few days to try to cover the mud; but you know chickens they scratch it all around anyway. Ridiculously, I even go out in the evening with "my big chicken foot" (a rake) and move the straw back around. Call me crazy, it's okay. By now, the straw is part of the muck. We need a long stretch of sunny, dry weather (ha!) and some water management work which will come soon. We are also extending the electric fencing out to give them some green pasture soon.

At this point I need to get all the old straw out of there and do something different. It's gotta be a health hazard for them, and it's no fun to fall down in for me!

Until then, and after actually, what tips do you guys have for managing a muddy, mucky run?

Pictures of your yards appreciated if you have them!

Either deep litter, keep adding organic matter, or raise it up with gravel or sand. For outside I prefer the deep litter.

It gets wet alot here (HI) ... Researched what to do for ground cover, I was leaning towards sand until a Member reminded me it gets hard & heavy when wet. She recommended DLM. We have no access to lumber mills like you all, so I went with shavings that I can purchase at Dels/TSC. It's working great but during our hurricane last summer it got nasty & the ground was really wicking water, had a stream & puddles.

This year I'm trying the horse pellets; compressed sawdust, I think. We just went though weeks of rain but no flooding. However a section on the coop was getting pretty wet. So I raked back the shavings, added the pellets at dusk & covered with the shavings. The next morning, the pellets absorbed the water which the chickens mixed into the shavings. I just added more shavings if it got too wet. I was planning on shoveling out the wet sawdust but they got it before me.

I used straw years ago but when wet, it got to be a tangled mess. Read where someone had an old greenhouse with pack gravel floor what was the best. It's harder when the dirt starts wicking the wetness, that's when I have issues so I'm watching to see what more is said about ground covering. Although I'm 100% into my modified DLM ... I just keep adding shavings & about 2x a year I remove the scratched up dirt/shavings to use as ground cover out back.

We've been getting truck loads of wood chips free from the town so thats what my secure run is. It's probably about 4 or 5 inches deep & its holding up fine in all this rain, but it is covered. I throw handfuls of leaves & dried plants & things in & I throw scratch out there too so they move it all around & keep it fresh. You know a chicken can't resist a pile of leaves!

I use the deep litter method. Start with tree trimming wood chips 3 - 4 inches deep, if you can't get them, use untreated mulch. To that add dried leaves pieces of thick and thin tree branches, yard and garden waste when available, pine needles, some straw. What you want to accomplish is a nice mix of different stuff, this will keep everything loose. The poop will filter down through the litter, decompose, not give off bad odors and will not draw flies. Add more stuff as you get it, to keep it freshened up.

Here's mine after adding yard and garden waste, before the chickens got to it. My run is covered, but this method also works with an uncovered run. 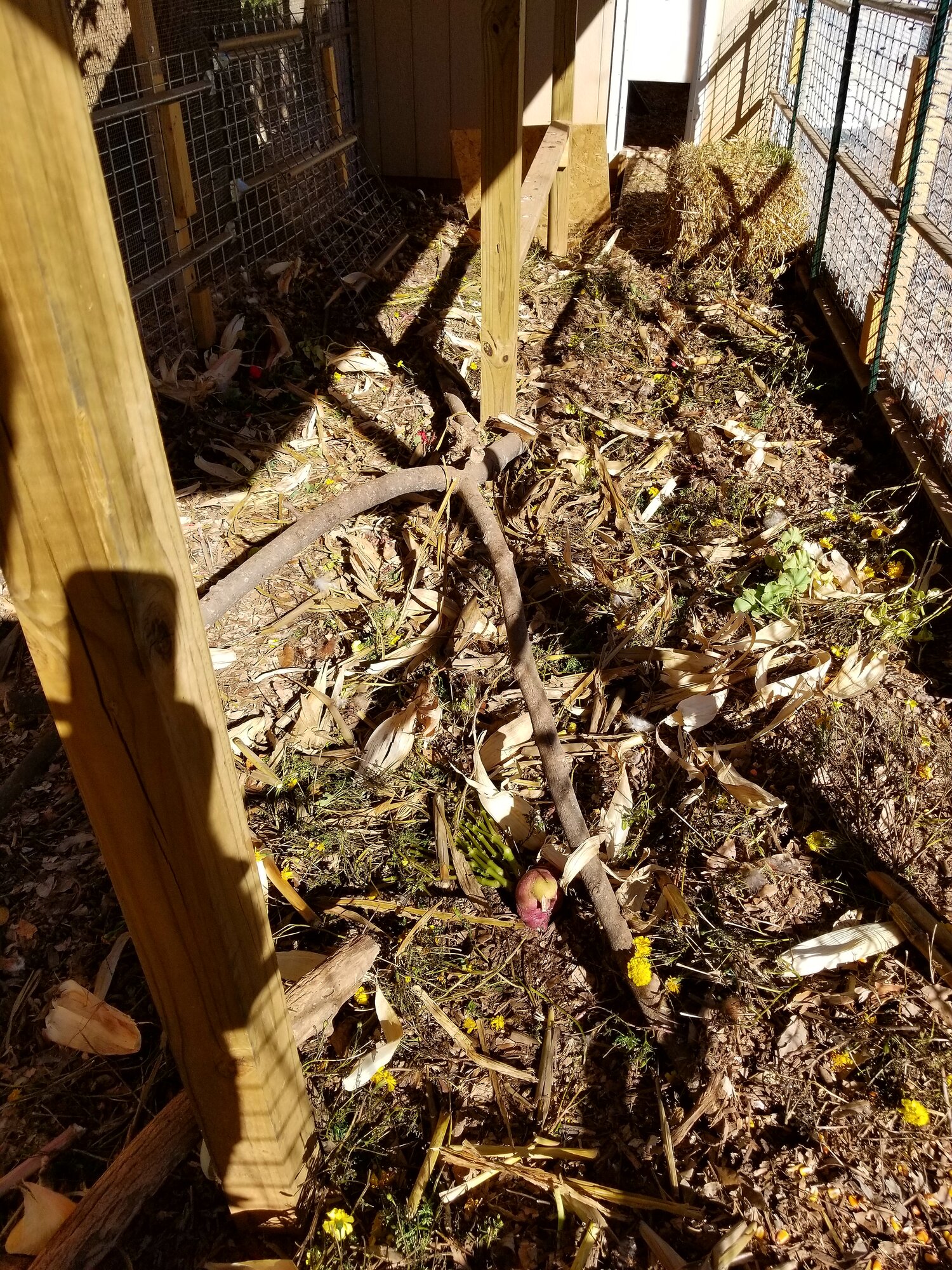 I put linoleum down in the bottom of my coop, and for the run, I just leave it dirt and weeds from our garden, or other organic matter.


I can relate with all this horrible rain! All winter in New Jersey, we got rain storm after rain storm! The water in our goat pen was so high that we had to build a boardwalk for them to walk on! Crazy!

Thankfully, we had two sump pumps to keep our basement dry and clear of water.

Hope you find a good solution!

Get some aged wood chippings from tree trimming....
...or go to the big box store and get a few bags of uncolored mulch.
Smaller stuff like straw, dry grass clippings, pine shavings, dry leaves, dry pine straw, can be part of it... but the big chunks of wood are most important

Then get this fixed:

How big is the mud area you're dealing with currently?
Is any part of it covered?
For a temporary fix, you can sacrifice a plywood sheet or two (or even some pallets) and pile the straw or shavings on top. They'll still scratch it around but at least it won't get all muddy, it worked for me before I made my permanent fix. You can also add lots of additional perches so they can get their feet dry. Mud is not a healthy environment for chickens.

I'm so stranger to mud or standing water, and I've tried all manner of remedies, but when you live in an area with a 6+ month rainy season.... not every "solution" works. At one point I even had water flooding into my covered areas.

I think a very key factor is having a gutter and directing the water away. The runoff from even a small roof can be quite significant and will puddle next to your coop or run and probably flood into it. I have a rain chain and collection bucket with a hose that leads to my garden beds. A french drain could help for other areas that aren't affected by roof runoff. I use pine shaving in my covered run, and before my gutter was installed it did flood in there and the pine shavings were slippery and gross. I can't imagine if direct rainfall poured on it all winter.

So for my narrow uncovered chicken yard, I use a very thick layer of wood chips. But you've already experienced your chickens scratching the bedding and mixing it with mud below and I've seen wood chips just sink away and disappear over a short time as well. Then I found this idea: Mud Management and copied it. When the ground is reasonably dry, you need to level it and cover it with a barrier, I used pvc poultry netting. This isn't meant to be a predator proofing, just a means to keep the wood chips from sinking and keep chickens from mixing the chips and the mud together. I didn't want to use wire fencing for the barrier because I've seen it rust and deteriorate with prolonged exposure to the ground and that could hurt my chickens if they scratched it. 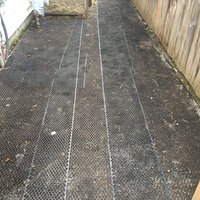 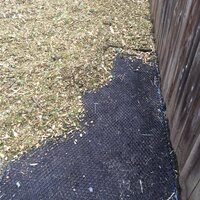 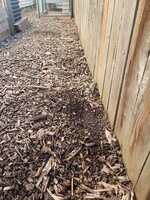 This is a close up after one year, and in the middle of the "mud" season:

Can you see the mud? Me neither!

The rain rinses most of the poo and chickens turn it regularly and also make some pretty deep potholes, so I have to rake it level every so often. 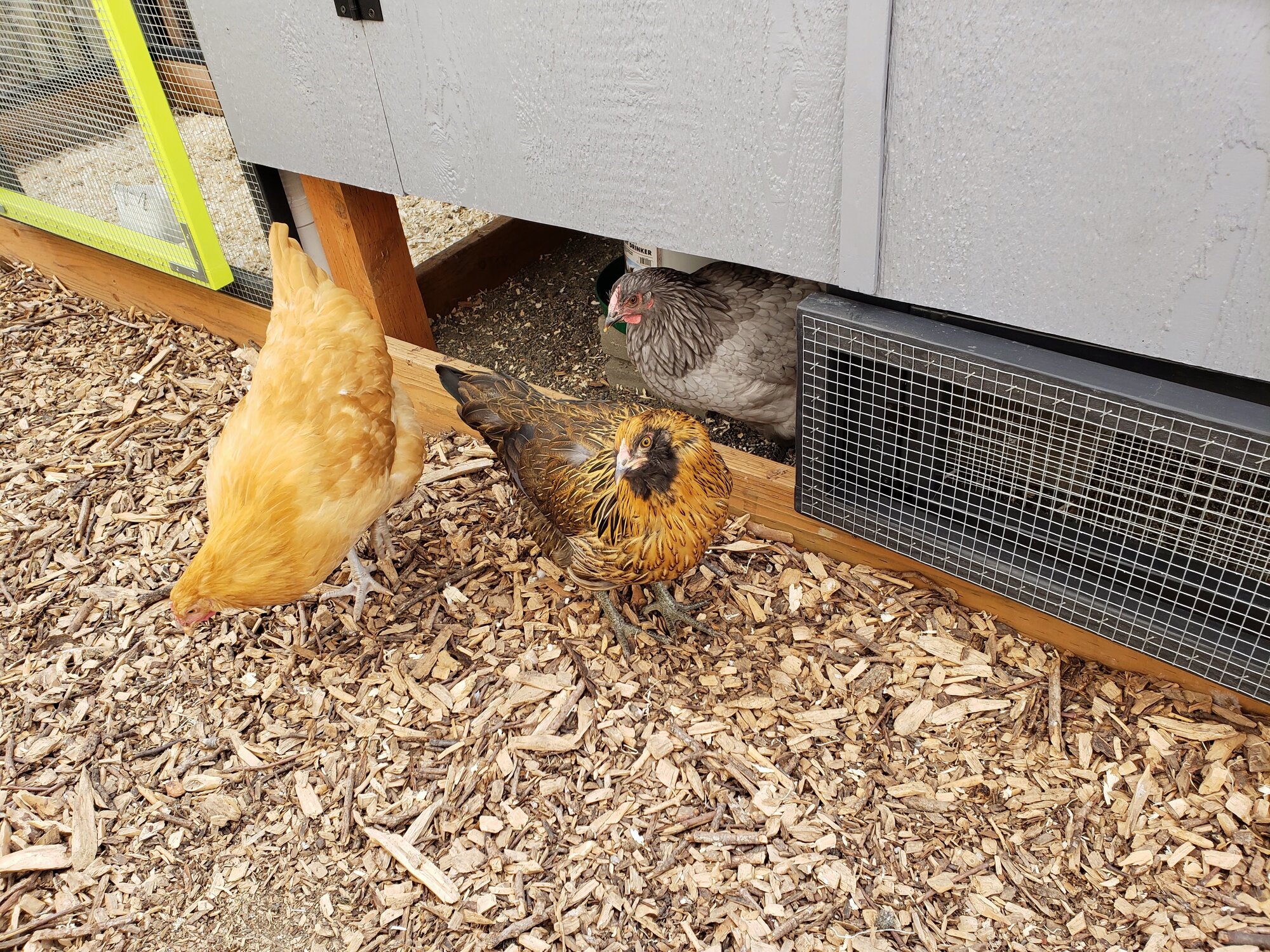 I've got to try that ... A section of my Chicken House tends to get soupy when we get days of continuous rains & with hurricane season coming up want to get started to alleviate the mess I had last year. Need locate pvc poultry netting or something similar. Thank you for sharing

FlappyFeathers said:
cover it with a barrier, I used pvc poultry netting. This isn't meant to be a predator proofing, just a means to keep the wood chips from sinking and keep chickens from mixing the chips and the mud together.
Click to expand...

How deep are your chips @FlappyFeathers?
Do you have another place they can dust bathe?
What happens when they dig down to the mesh?
You must log in or register to reply here.
Share:
Reddit Pinterest Tumblr WhatsApp Email Link