Show Off Your Parakeets & Cockateils!

I want to see your Teils and Parakeets!

Here are some Parakeets & A Cockateil at our Pet Store (Which I would like to get!

Okay! Just a few of my rescues-somebody elses throwaway pets.

Who would ever dump those?!

I started out with Cinnamon when I was 8 years old. She was a 5 year old Cinnamon Pearl cockatiel. When I was 10 she laid an egg and my mom said we can get her a friend. I rescued Mohawk from a home that he was being abused by their teenagers. He was very mean but for good reason. I read up on breeding and bought a nestbox. They laid 3 eggs and one hatched but then Mohawk died suddenly of something I still can't figure out. Cinnamon then abandoned the sole baby (I named Gizmo) and at 11 years old I started handfeeding a 10 day old cockatiel. It was hard but thankfully it was summer and I didn't have school to worry about. I handfed him until he was weaned and This is Gizmo now. Then when he was 3 I decided to get a mate for him and her name is Pearl. They have one or two (no more than 2) clutches yearly and I find great homes for the birds while getting a few dollars for them. I pull them at 3 weeks and handfeed until weaning. Here's their last clutch. The smallest one turned out to be whiteface pearl which is a rare color.

In the first photo, the bird on the left was found in somebody's yard. They kept him for a month then decided he needed somebody who liked birds. The bird on the right out lived her owner as did the ancient cockatiel in the second photo. I have another beautiful lutino who belonged to a child who forgot to care for her. So her father gave her to me. I have a normal grey cockatiel whose owner didn't like the noise or mess he made so kept him covered most of the time. The particular bird came to me as a feather plucker and will occasionally pick his chest bald. Another normal grey is a male I hand - raised in Oct. 1988. I sold him, the owner had a child a year later, and found the bird too needy with a baby around. So I brought him home. I have several more greys who outlived their owners, and even had a rare 'frizzle' I recently euthanized due to old age issues. He had curly feathers!

Here is my flock:

Monty (she has a beak deformity)

These are my miracle birds, Sky and Puny. Sky's mother died when she was 1 day old and I raised her by hand. She was so small that she was dwarfed by a dime. The only way to feed her was to put a few drops of formula (Harrison's Juvenile Handfeeding Formula) on my hand and let her lick it off. When she was three months old, she got her leg caught in the cage bars and literally tore it off. Miraculously, she survived. One month later, the tip of one of her remaining toes was bitten off by a parrot when she accidently landed on his cage. Still, she thrived, and, 7 years later, she's still with us. She has a pair of perches that she can sit on, using her tail as a prop. She preens while hanging on her good foot. She lives with her "mate", Puny.
Puny was the third of 5 chicks in his clutch, all of which caught Polyoma virus when he was about 2 weeks old. Unlike most other birds, parakeets sit on their eggs as soon as they start laying, so the chicks are of different ages. Puny's older siblings recovered and are completely normal and the younger ones died. Puny was left with "French molt" (aka Budgerigar Fledgling Disease). He has no tail and his wing feathers are deformed, so he cannot fly. He also has a severe tremor. Because of their physical challenges, they cannot mate successfully (watching them try is hysterical), however Sky lays infertile eggs and tends them dutifully. 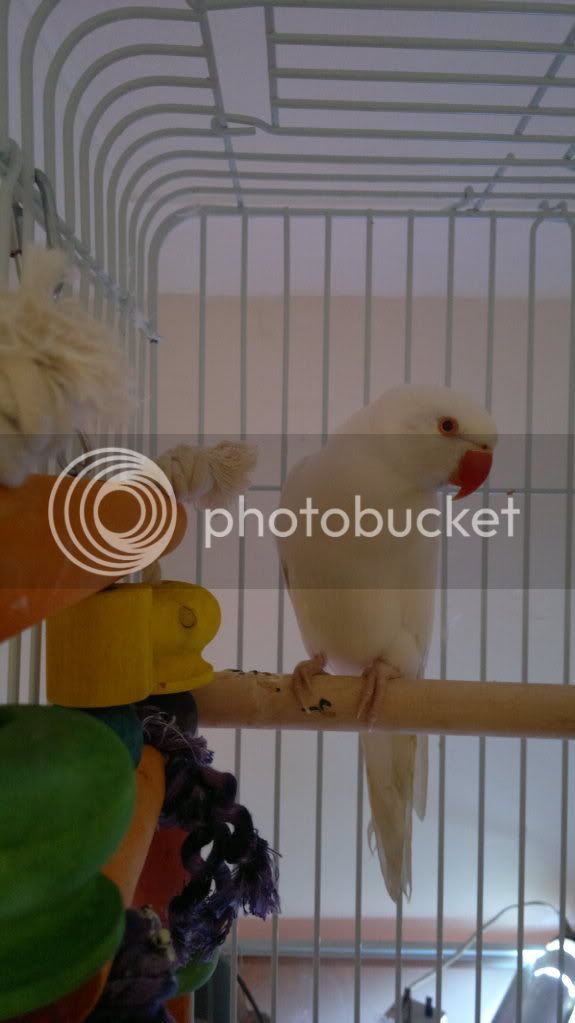 Mango and Dandelion... the parakeets.

Thinking about getting parakeets...
2 3