Show pics of your show rabbits and other show animals here.

This is my current main standard chinchilla herd buck #03 (his ear number). He may go into retirment this year. two years old. Boy does he have a massive body and head! 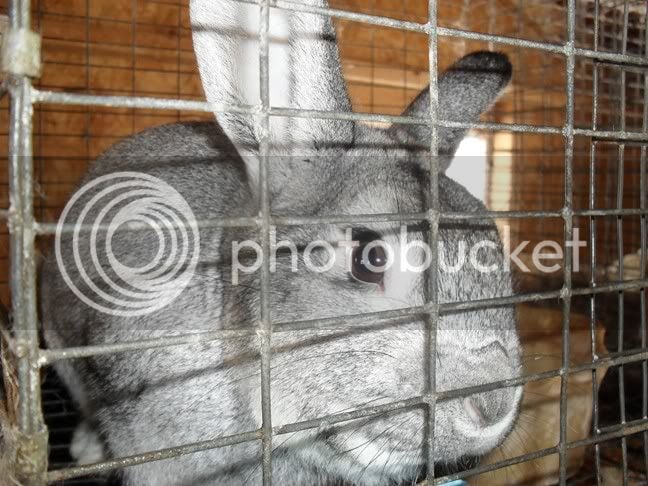 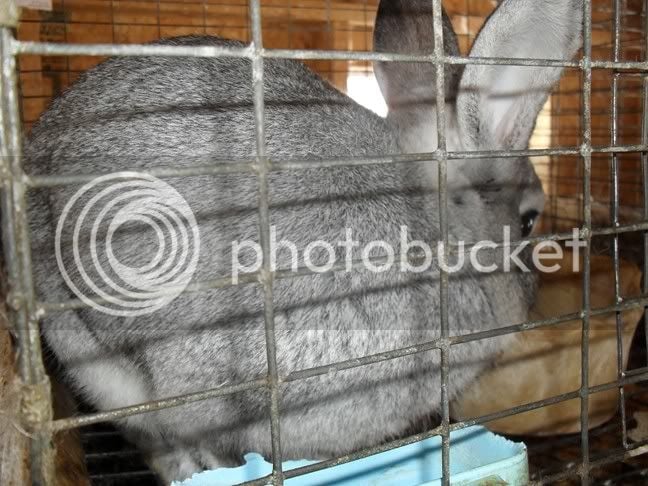 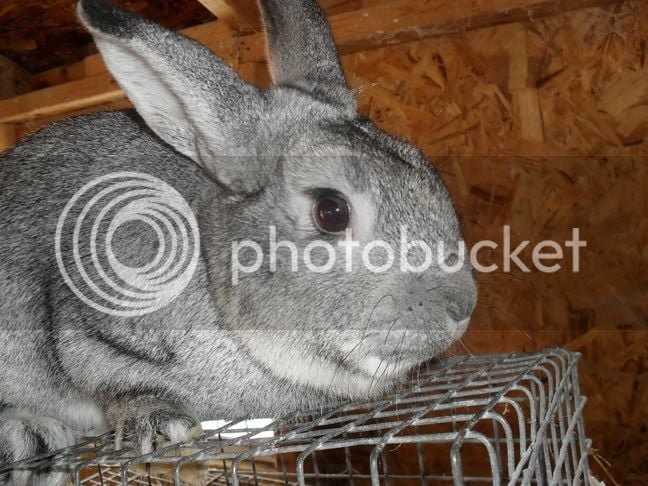 This is him in a show pose. For those that have never been to a rabbit show, they stack the rabbit up so its front feet are in line with its eyes, and its back ones in line with the top of the hips. This makes the rabbit look full of depth, and nice and round. You want a rabbit that best resembles the breed, and is nice and massive looking, and feeling. the width of his back is about the length of my hand. 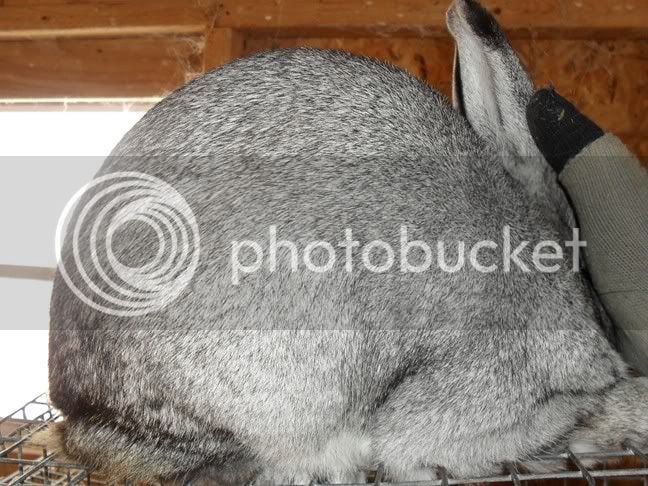 the new litter of chins I posted about in the baby animals thread some time ago. Got two hopefuls out of them. The other two are pet quality. Mom was sixth place jr doe at the ARBA 2007 national show and convention. She's also won several best of breeds, has three leg certificates for grandchampionship, and has been picked as runner up for best in group in show a couple of times. which is rare for the breed to do. 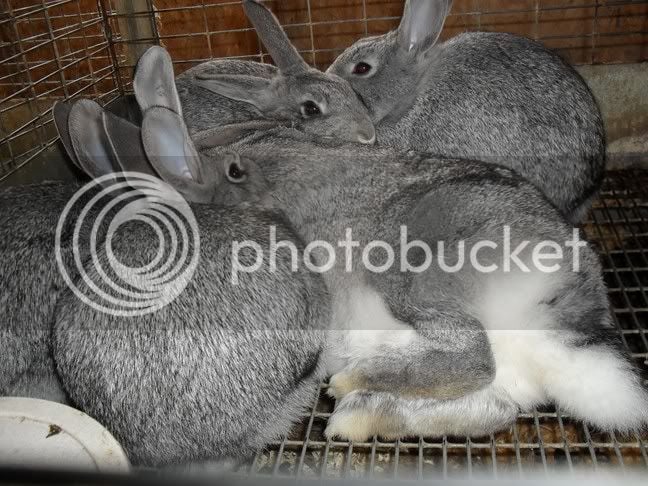 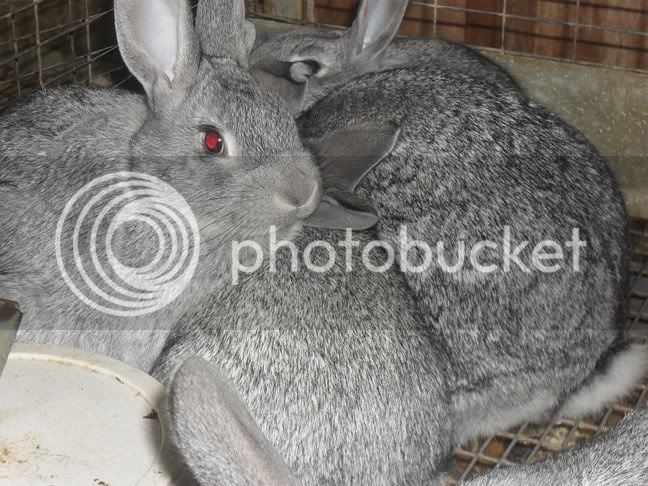 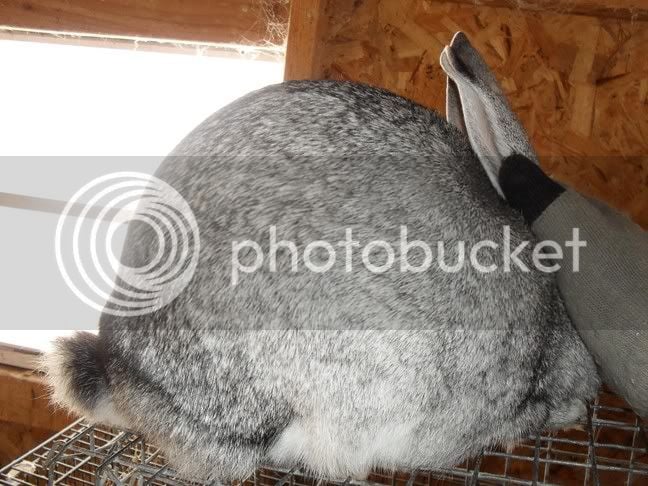 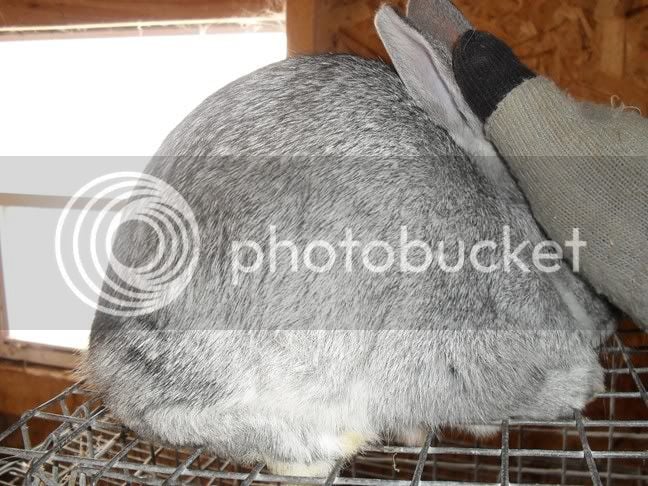 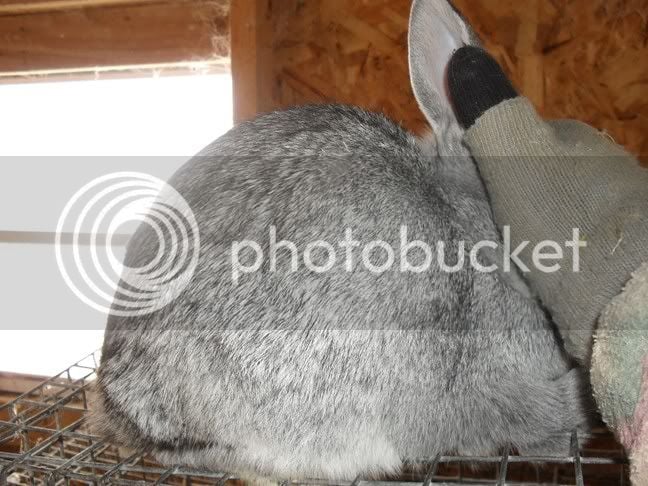 One of my other bucks. 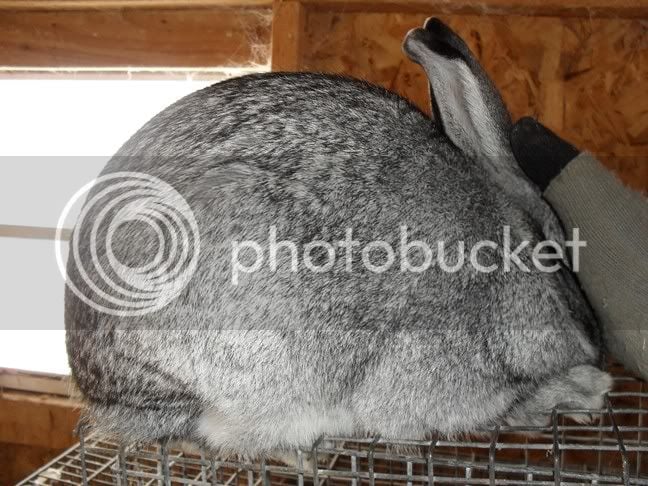 And another buck. This guy is my escape artist and lover boy bunny of the bunch. 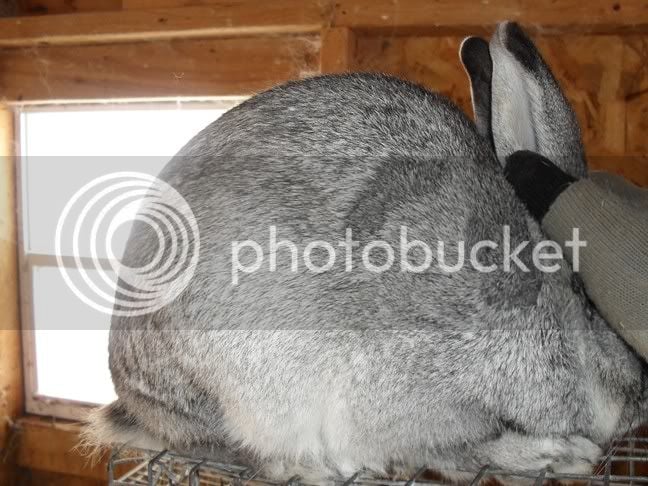 One of my floridas. She and her sister are due to have their first litters next week. 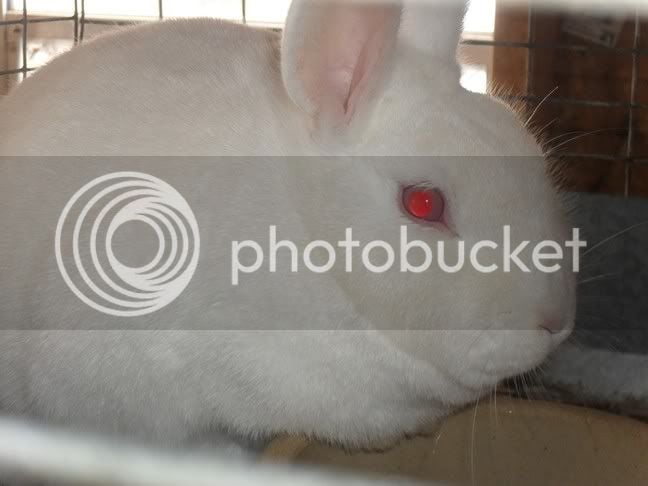 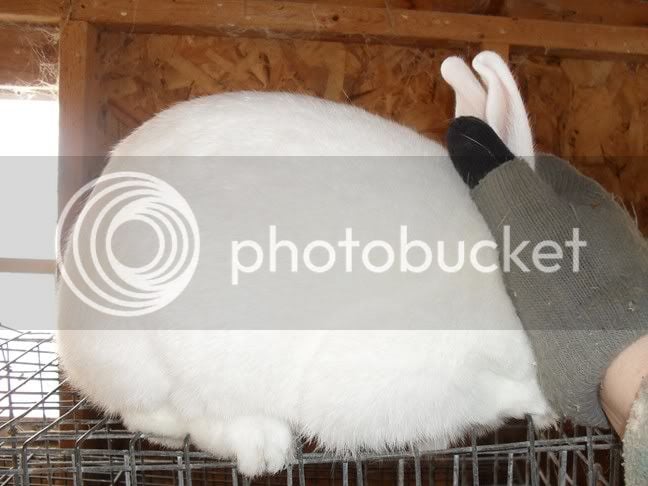 Ok these guys aren't show rabbits. But they are cute. And the mom is fostering two purbred chins from another litter. Hopefully they will both turn out to be decent show rabbits. 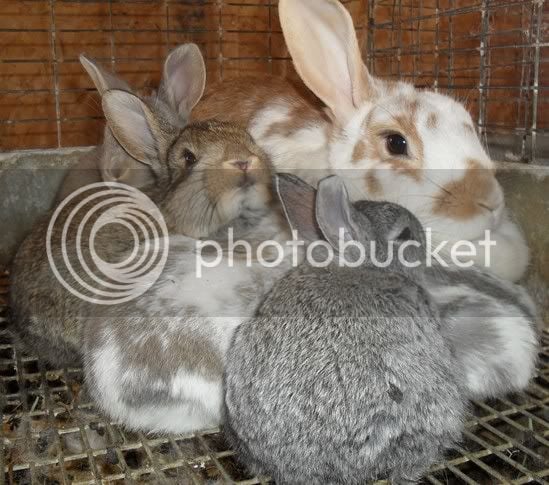 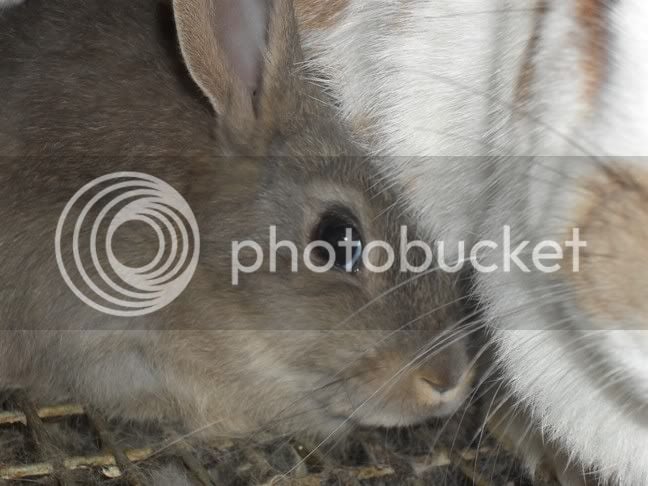 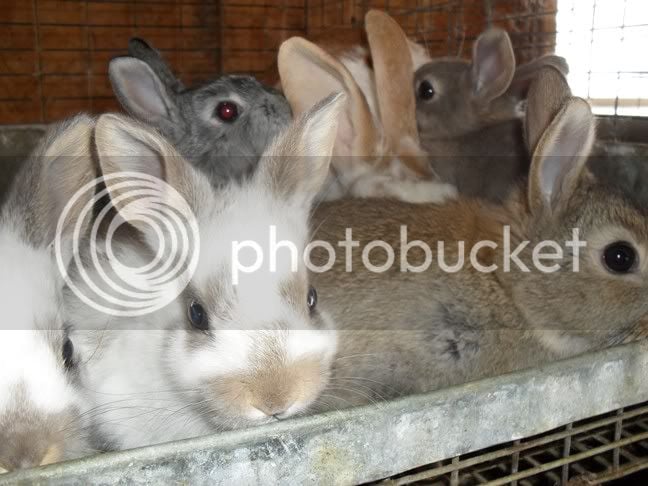 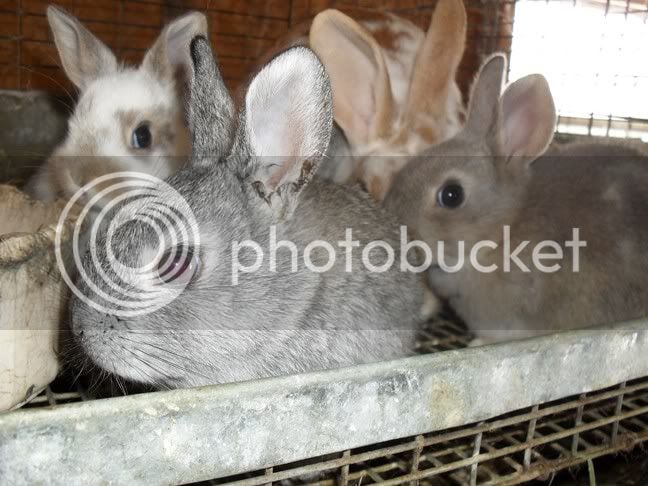 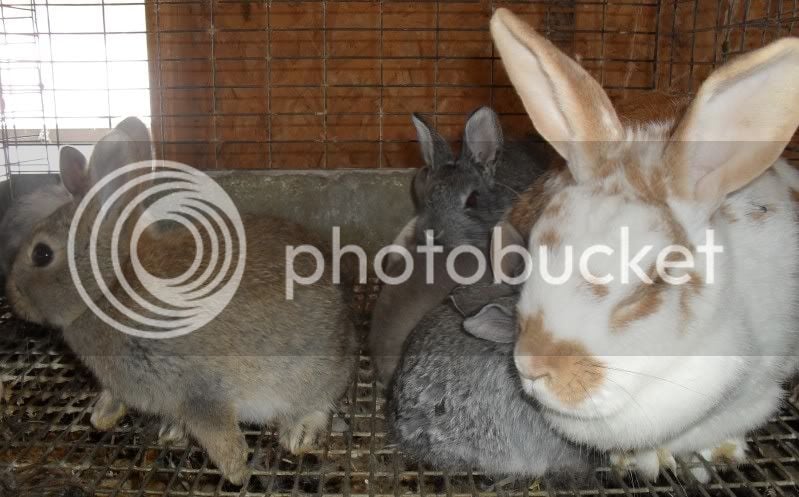 New litter of standard chinchilla babies. Hoping to get some good ones out of them. 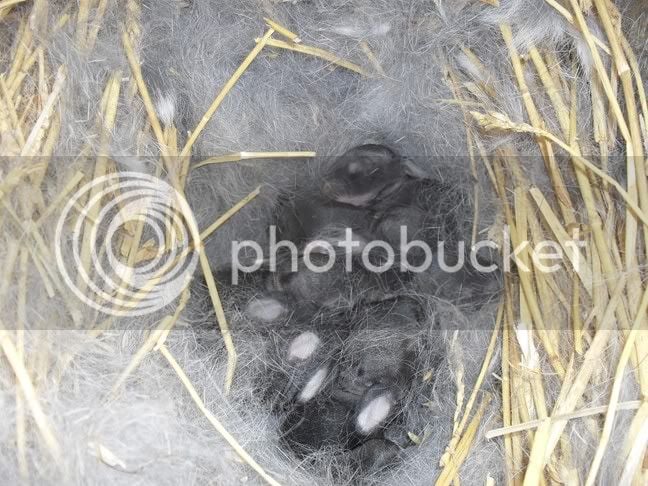 The nest box. i highly recommend getting a bunch of these if you are looking to breed rabbits. 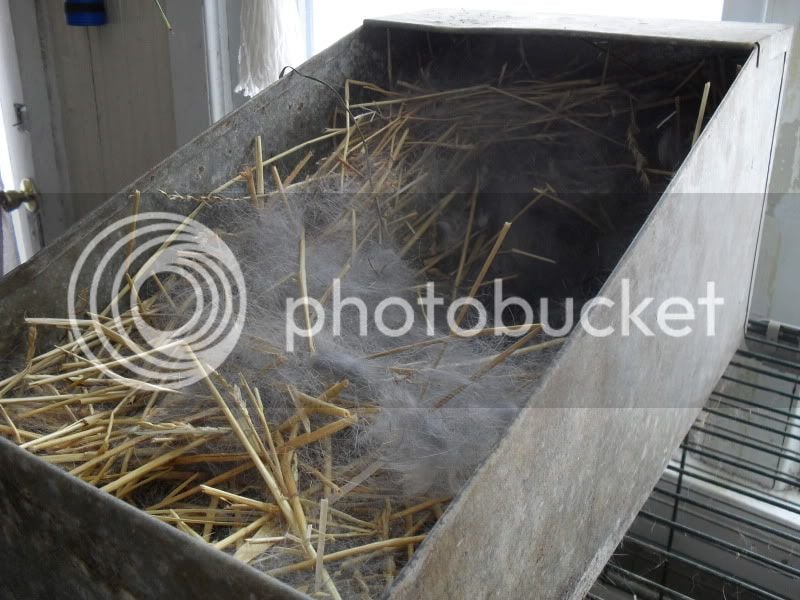 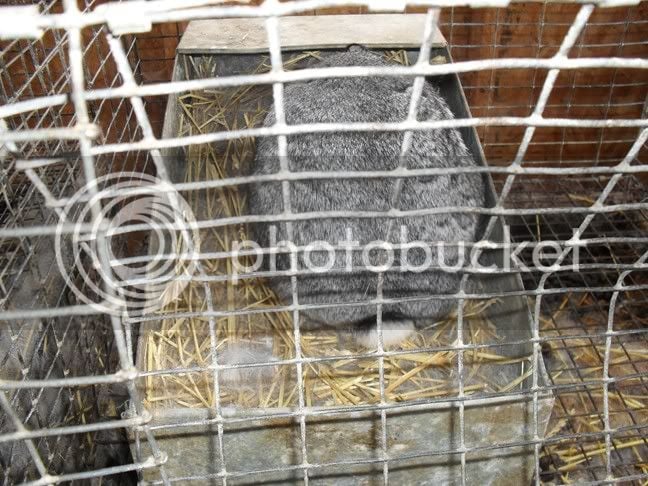 This is 03's son. Didn't want to get him out he was having too much fun being a showoff.

Clicky clicky on the picture to see him.

I've never seen photos of the chinchillas before, and certainly none in real life. That's the prettiest coloring I've ever seen on a rabbit. Gorgeous!

Quote:
Thanks. They are colored like the real chinchilla rodent. If you blow into the coatyou will see a real pretty nice clean pearl white ring. Its actually very hard to get that when breeding these. Sometimes half the litter's color is too dark. Sometimes they have no ring color at all. And sometimes when they molt the ring turns brown. This is also a breed that changes colors when they molt out their baby coat. they start off as brown, and it makes it very hard to see what the coat is going to look like when they are older. these are one of the rarest breeds of rabbits in the US. They are a challenge! i try to look for signs of that ring color when they are 4 weeks old. that helps determine if they are going to have a decent colored coat or not. Its also hard keeping the coat in condition. this is a breed that will molt, and then stop halfway through, which makes it look like they have lines in it, and they end up unfinished. with the breed standard, over half the points are on the fur and color alone.

Quote:
Thanks yeah. I try to do what is best for my babies.

This is my rabbit named Mr. Bunny. Pretty bun buns!!! I have a Doe that looks just like your #03! She's expecting in a few weeks

We don't plan on showing any of ours though. I bred her to a Dutch, so we will have mixed buns. I have another Chinchilla buck, but he's a bit young just yet for breeding. I like the little foster buns pics, they are adorable!!!

Is this a suitable buck?
2