Last fall I posted about my splash ameraucanas with silkie feathers and I wanted to update everyone.

Today I had my first hatch from this pair. I used a Buff Orpington broody hen to hatch six eggs. All six hatched successfully and look to be splash colored. I can't wait to see how the feathers turn out - should be silkie feathered.

The Splash Rooster is named Ozzie and the Hen is Harriet. The Black Ameraucana hen is Ebony. She has normal feathers. I haven't hatched any eggs from her yet.

Recently I had to take Harriet out the the pen and separate her because one of the dogs got into the pen and roughed her up a bit. She is looking better and I will add her back in with Ozzie in a week or so. But I guess the fright has stopped her laying and she hasn't laid any eggs in a couple of weeks. Hopefully we will be back in business soon.

Here are some pictures:
Buffy with babies 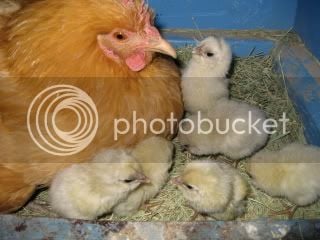 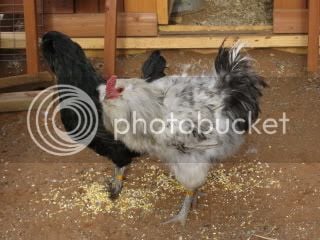 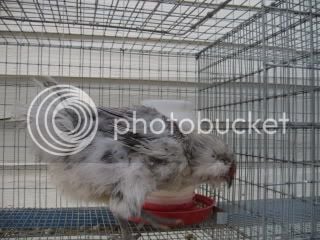 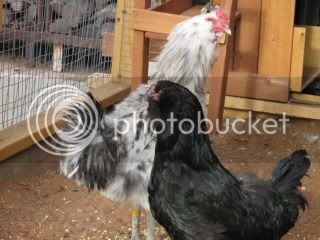 i bet those guys are so soft

That splash roo is gorgeous!

OMG those are going to be so cute!!!
And you are in TEXAS!
Will you ever sell any of these?
How far west are you?

I live near the Midland/Odessa area. PM me if you are close. Most folk want eggs shipped. If you are interested in an actual pair - I might fix you up!
Last edited: Mar 10, 2009

Oh bummer. That's too far for me from San Antonio. My toddler would drive me nuts on a roadtrip that long! LOL.
I have never hatched eggs before but I might have to start for this!

The other thread didn't mention what happened to the matching hen (splash silkie Ameraucauna). Is she okay or did something happen to her?

The next few weeks will be so exciting! Can't wait what these little ones turn out to be like!

I do not believe they will be silkie feathered. I am thinking that the silkie gene is recessive, so the offspring should not be silkied. I hatched out 4 chicks last year from a RIR female and a Splash Silkie male and none of the chicks were silkied. All were regular feathered, and all of mine were blue, with various degrees of white lacing on them. The cockerel had gold hackles and saddles and one female had gold on her as well. All had small crests, all had black skin, and all but 1 was 5 toed.

the blue hens (the red hackled hen in front)

Two of the hens

Karin, The hen is doing okay. I had to remove her from the pen with Ozzie because one of the dogs got in and roughed her up a little. She wasn't hurt too badly, some lost feathers and traumatized. I have her in a holding pen to recuperate. Right now she's stopped laying eggs, but she's looking much better and I'm hoping to put her back in with the rooster soon. The splash hen is the mother of the chicks - not the black ameraucana.

Also I sent you a PM.

The little splash hen in the pen by itself is the mother - not the black ameraucana.
Last edited: Mar 10, 2009

Hey! I was wondering what happened with these guys! I would love to see how those babies turn out.....
and the chicks from the black ameraucana(if you hatch) won't be silkied, but I do believe the silkie x silkie = all silkie, that is if silkie is a recessive gene......

T
What color chicks will I get with a black rooster over splash hens?