I know there are a ton of bumblefoot threads, and there is some very good advice out there (checkout @Isaac 0 's article and all the great advice we've personally received from @Miss Lydia and others). I'm starting this thread just to document this case. If it helps other people, great! If you want to chime in with advice, we're all ears.

Lucy (who is more commonly called The Goose), is a three-year old silver Appleyard duck. We spend a fair bit of time with our ducks (at least a couple hours of supervised free ranging most days), which is why we were shocked to find what appeared to us to be a pretty advanced case of bumblefoot on Goosie's left foot yesterday morning. 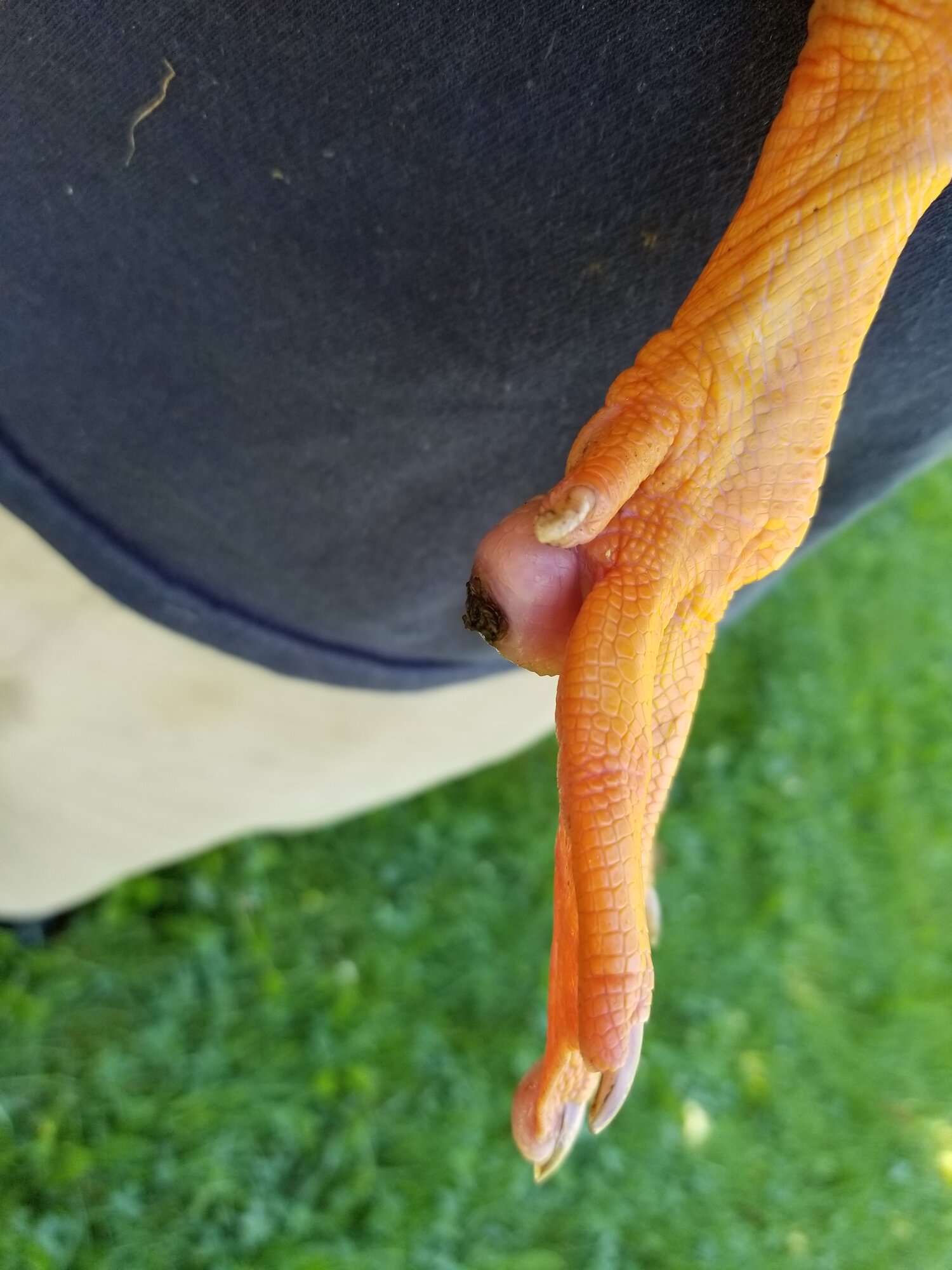 She was not limping or appearing to favor the foot, and she was acting entirely normal, cruising around with her pals foraging.

We've dealt with bumblefoot before a couple times, and we've always been able to resolve it non-surgically (largely through an aggressive regimen of epson salt soaks. We're thinking this time may be different. We've contacted our vet, so we're working on that angle, but we've also started soaks. Here is her foot after this morning's soak. 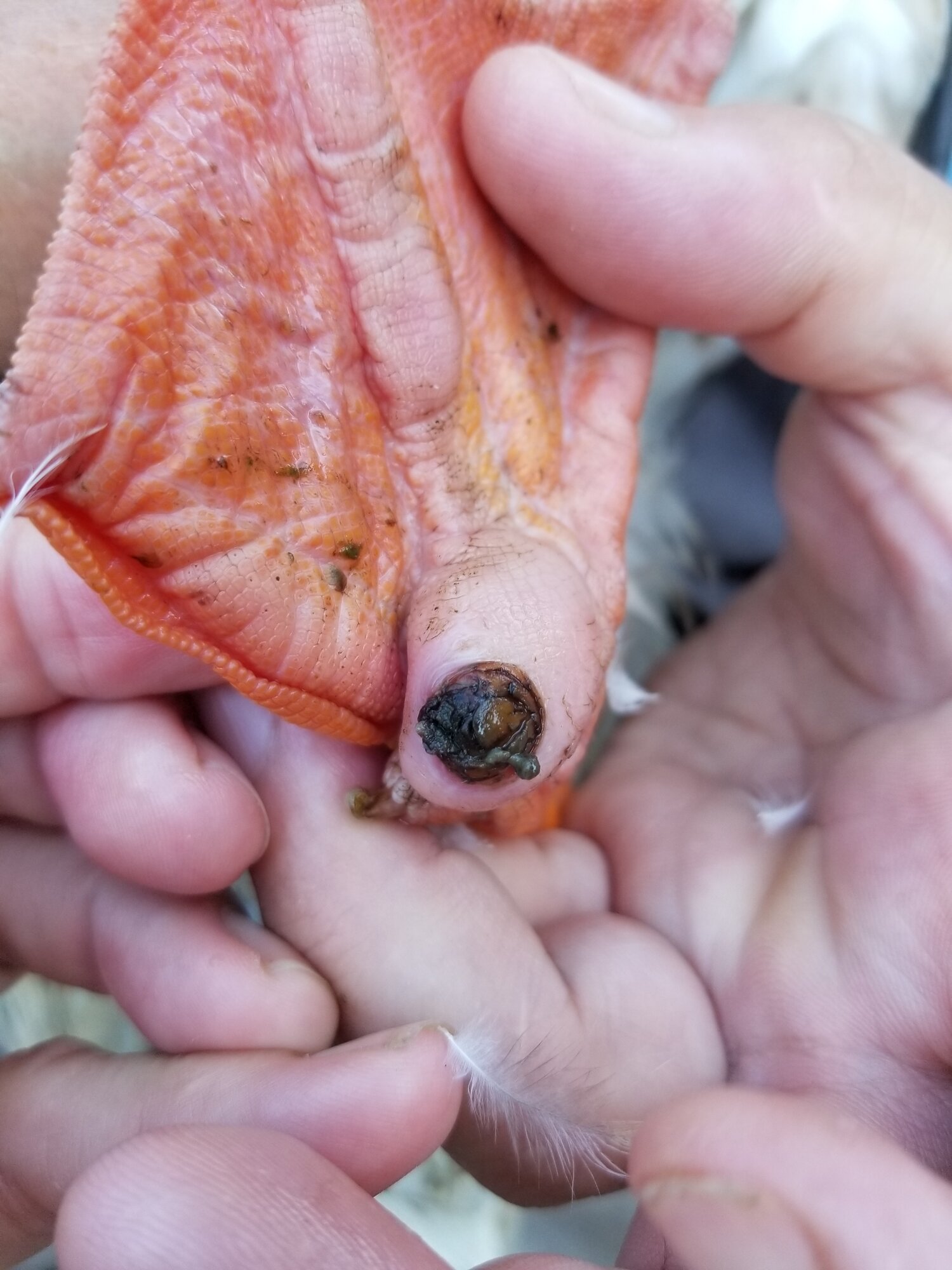 She is chilling with her sisters now, and we'll do another midday soak. Hopefully we'll get in for a vet appointment Monday. Otherwise, we may be looking to take the plunge into surgery ourselves. Here's The Goose in happier times: 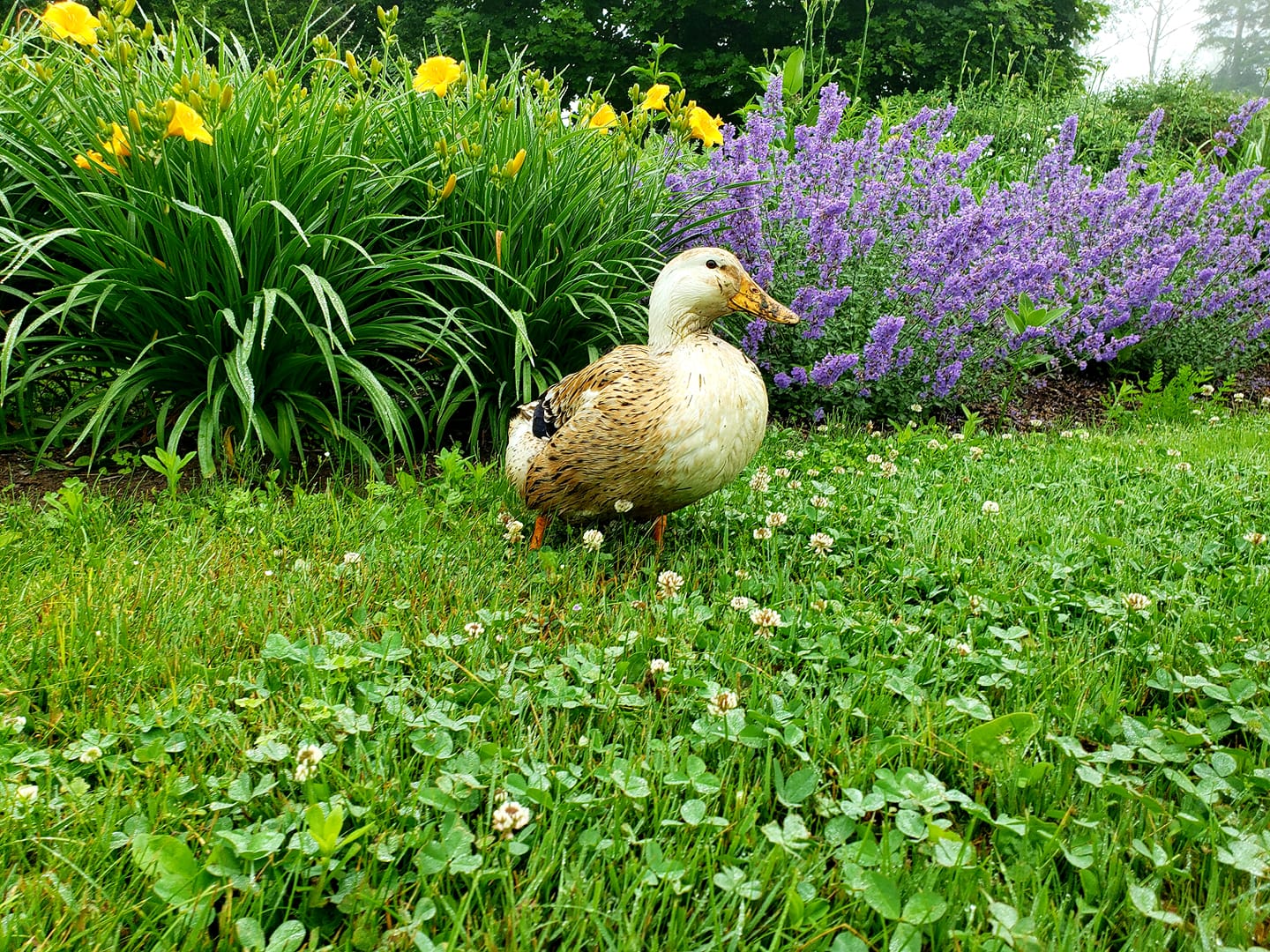 Thanks to @Miss Lydia (and of course to @casportpony !), I'm putting this great link here so we can study up on bandaging duck feet:

Oh wow, when you pull that core out it will be so satisfying!

Ratchnick said:
Oh wow, when you pull that core out it will be so satisfying!
Click to expand...

Satisfying and horrifying at the same time.

Just an update on Goosie. After repeated soaks and scraping at the scab, we just could not get it out. Throughout this whole time, Goose has shown no signs of the bumblefoot bothering her (no lameness, etc.), and while the size of the bump has decreased some, it is still big and felt like it might be moving up slightly into the joint. So off to the vet we went. 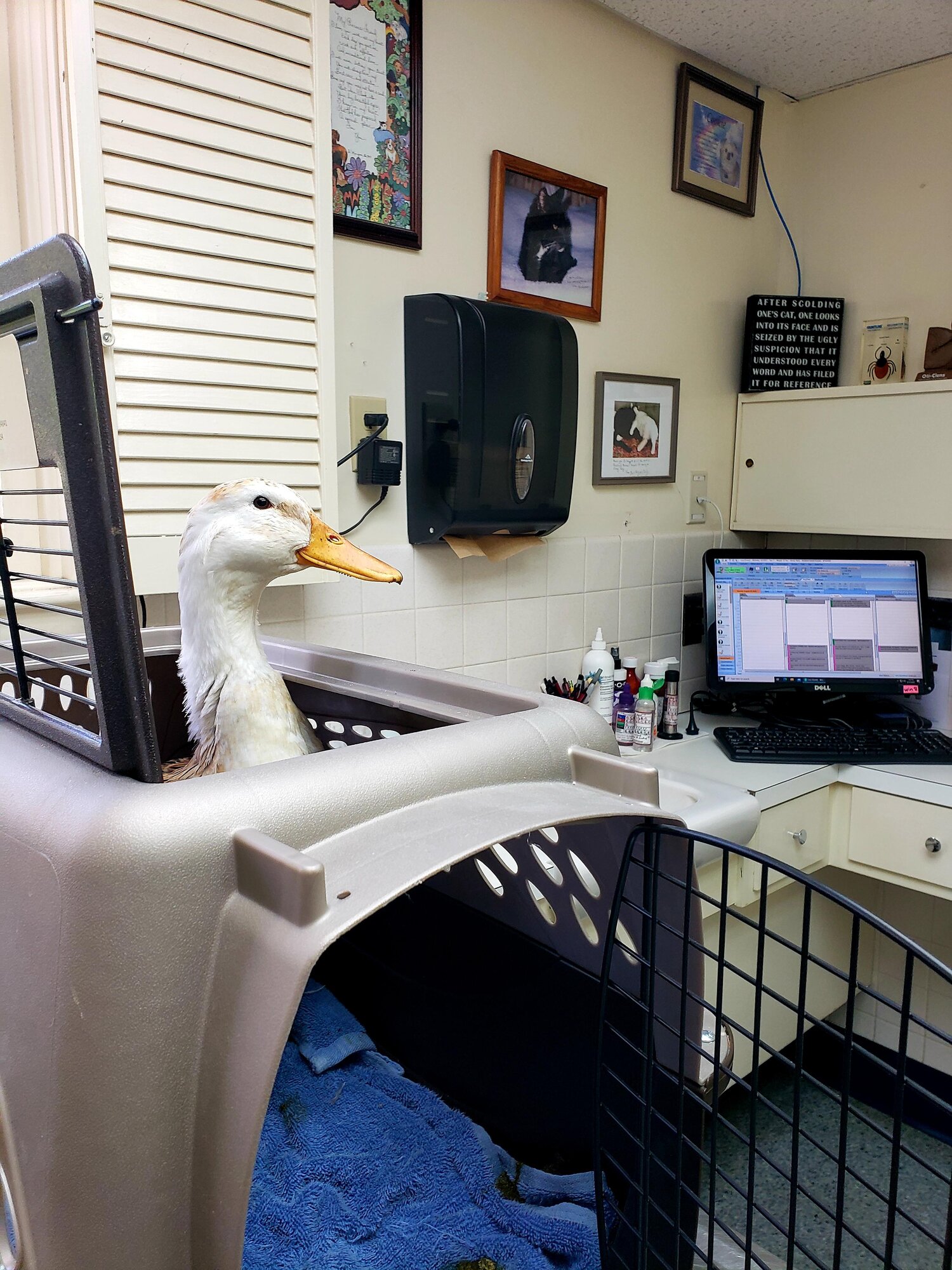 The vet was not overly concerned, but she also felt as if she could not get the plug out in the way a bumblefoot plug usually comes out. There is a bunch of callous, and with the smaller size, it's sort of folded over, so it is almost like a (fat) skin tag (if that makes sense). Anyway, the vet worked on it and got some more gunk out. Goose is now on a 10-day course of antibiotics (250mg Clavamox 3x/day). The exciting part is that Clavamox now comes in a chewable form!!!

Here is a pic: 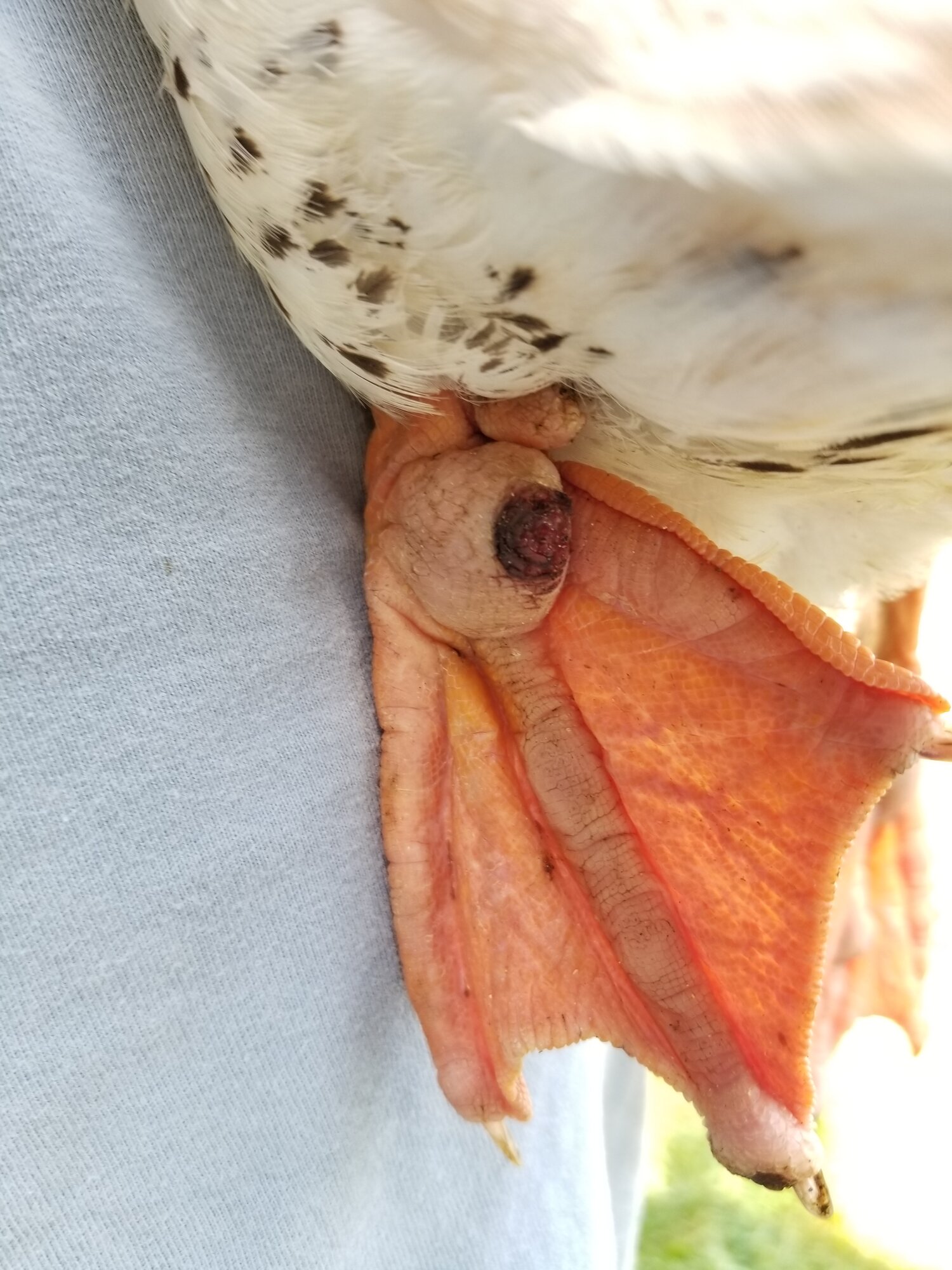 The vet did not bandage, as she feel like bandaging keeps gunk (i.e., infection) in, so we have her in a separate area of the run that is grassy and dry and has not had another duck in months (so no poop). We'll continue to do soaks (although I think we'll switch from Epsom soaks to iodine soaks now since the wound is open) and clean/inspect it 2x/day. We may end up going to wrapping it so she can get back out in the field with her girls, but we'll wait and see.

Oh! She also had some laser therapy!!!! Our vet is having phenomenal success with laser therapy, and she suggested we give it a shot.

Goose was a model patient, but she sure was happy to get home.

Because people are always asking, the cost of the visit and care was about $200 with about half of that going to the drugs.

We're happy to receive any feedback or thoughts any of you might have.

Let us know how the laser and antibiotics do with her. I tell ya bumble isn’t something where it’s one type of treatment an that’s it. I’ve only had one duck with it. That one was really different than any I’d worked on with my chickens. So that’s what’s nice about BYC we can share how we’ve treated and hopefully help someone else going through it. Or we can option for a vet if that plausible. All I know is it can be a pain in the butt.
R

What does the laser do?

Ratchnick said:
What does the laser do?
Click to expand...

Depends which direction you point it...
R

Stoney Meadow Maple said:
Depends which direction you point it...
Click to expand...

Really? I figured it would laser things regardless of direction? I just cant fugue out how that helps.