Hello! The hen I posted about recently, Rhody, is feeling much skinnier than normal. She has been a big, healthy hen all her life—she is two and a half—but about a week ago, I noticed her losing weight. For a few days, her comb was slightly floppy and discoloured, but with some electrolytes and fresh water that has improved and her comb is now normal. She has no symptoms of anything, but is significantly thinner than she usually is.
I have a few theories, and I’d like to run them by everyone on here:
Theory number one is that she is stressed out because of the weather getting colder or because of a coming molt. However, she has never gotten stressed out by cold weather before and she shows no signs of molting.
Number two is because of changes in the coop that I’ve implemented recently. I started putting apple cider vinegar in her water and am gradually changing her food from laying feed to grower feed again (with oyster shell supplements) for the extra nutrients since my flock doesn’t lay much anymore. Maybe both changes at once are stressing her out, and she isn't eating as much as she should? I’ve checked her crop and it’s always squishy and full of water with little bits of food, so she is eating a bit, but maybe not enough? Note: I’ve provided her with vinegar-free water so she can have that if she doesn’t like the vinegar.
And theory number three is that she’s stressed out because she recently lost a long-time flockmate. Has anyone ever heard of a grieving chicken? Because I had a flock of four very close hens and just lost my first one a month ago. Rhody grew up with the hen that passed away, Oakley, and they were close pals. Maybe she misses her old friend and is feeling too down to really care for herself? That might sound totally crazy, but I was just wondering if it’s possible.

Also: I just got a rooster for the very first time who might be contributing to Rhody’s stress/skinniness. He’s only been on my farm for a few days and hasn’t been integrated yet, but he might make things worse once he joins the ladies in their coop.

So—what are your thoughts? I really love my chickens and couldn’t bear to lose another, so any and all advice will be much appreciated

UPDATE
Today I found bright green droppings full of little red things (I added a pic) in the coop. I’m thinking it is most likely worms but dk what kind. Anyone have any idea what this is? 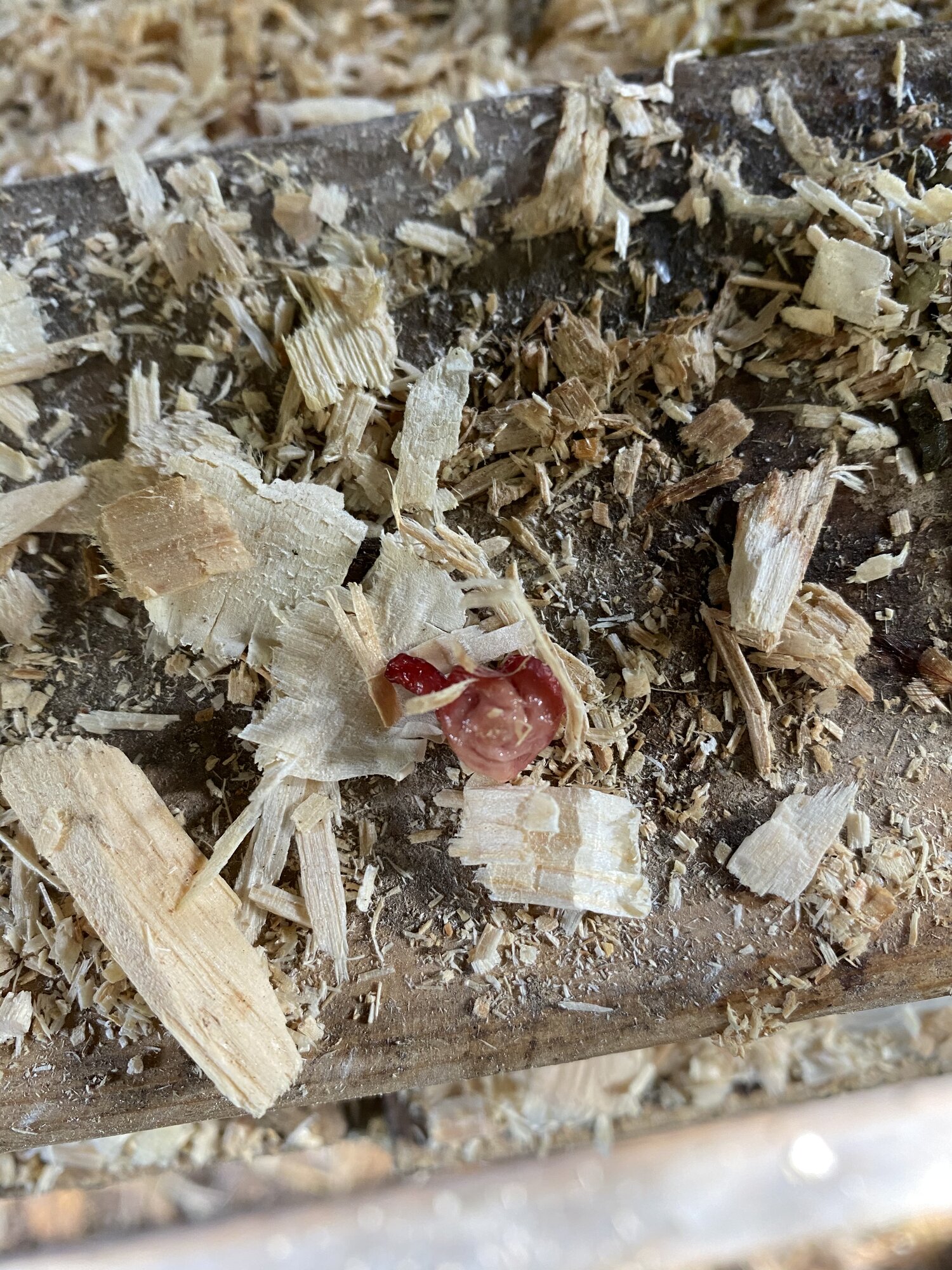 The death of the chicken you mentioned may have a relationship to this hen losing weight. Do you have any idea what caused her death? Some avian viruses cause weight loss and tumors.

Your hen has probably begun molt but you just haven't seen the signs yet. Look on the back of the neck for pin feathers emerging. Feeding canned mackerel a couple times a week can help restore lost weight as well as boost protein levels to compensate for new feather growth.

Has she been molting recently? Do you worm your chickens occasionally? There can be changes in them when pecking order changes due to a loss or new members. Most hens like having a rooster around if they are nice and protective of them. Check her crop in early morning before she eats or drinks to make sure that it is emptying overnight. Look her over for any lice or mites on her skin under her belly and elsewhere. What do her poops look like? Watch to see if she is eating, and try some treats of scrambled egg or tuna.

Pullet is very lethargic and skinny
3 4 5