A couple nights ago I had a real scare, I discovered one of my precious Blue Fawn girls missing and couldnt find her anywhere so I spent an hour tossing rocks in the creek trying to scatter everyone else out and get them back up to the duck house with the "smart ones". I got a couple boys but was stuck with having to leave fatty & his 2 remaning girls behind for the night.

I finally got the 2 boys shuffeled back to the house and did a quick count inside and outside under the house (a couple of the older girls sleep with a brooding sister there). I counted everyone inside, including Kahlua, my older Blue fawn girl. Then i went outside and looked under and saw Kahlua??? I walked back around and looked again and was RELIEVED to realize it was Kahluas daughter with her head poking out of a nesting box, the one I thought had been missing!

She started to lay a few days earlier.. the first few were pretty funky and i found them out in the run. Today I was doing an "egg check" to remove and bad eggs & I checked the box I have been seeing her in and i just wanted to scream! and of course run and tell everyone that was home, lol. She has apparently been laying, everyday in "Her" box & there's currently about 7 eggs in there!

What's even cuter is that it's only the "good" fully formed eggs, not those weird soft eggs she laid to start with that she left in the yard, lol. There's 1 pretty small one and you can kind of see how they've gotten bigger each day. it was just too cute

I think she is trying to build up a nest to brood so I will have to remove some of her eggs as she gets more in there. They should start to be fertile here soon, she has been breeding with Fatty for quite a while now.

I'm so proud of her for laying in the box without me having to train her to do it! I just had to share 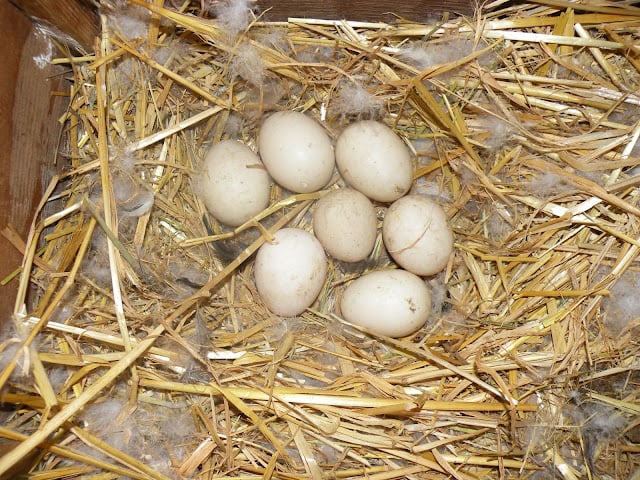 That is so exciting! I know if one of my girls starts getting interested in a nesting box I sneak a lot of peaks so I can catch them when they first start laying!

Need Help — duck abandoning eggs after 28 days. The ducklings are about to hatch!
5 6 7