So proud of our school district!


When Kyle Roberts started his eighth-grade year at Napoleon Middle School last year, he did not have many friends.
But thanks to a peer program that pairs general-education students with special-education students such as Kyle, the 14-year-old has gone from being socially on his own to being crowned freshman royalty at Napoleon High School this year.
The freshman class of about 140 voted for Kyle to be the homecoming prince. He rode in a Ford GT with homecoming princess Ashley Leathead in Napoleons homecoming parade Friday night.
Ellen Wilson, co-president of Napoleons freshman class who is also involved with the Pirateers peer-to-peer program, said Kyle has broken out of his shell and become more social.
I think everyone just loves him, she said. Hes really friendly. He waves to everyone.
The peer-to-peer program started at the middle school last year and was expanded to the high school this year.
General-education students help special-education students in their classes, spend time with them at social events and help them through the highs and lows of high school.
The kids in the freshman class have really taken to Kyle, said Bob Woodard, special-education teacher at Napoleon High School and one of the programs coordinators. Kyles one of those kids who always has a smile and is always happy.
Kyle is cognitively impaired and sometimes has trouble with the high school curriculum, but the kids make sure hes included in the classroom, Woodard said.
Kyle and his family moved from the Metro Detroit area to Napoleon last year. He attends Napoleon High School on Tuesdays and Thursdays and goes to the Lyle Torrent Center on Mondays, Wednesdays and Fridays.
Kyle said he liked being homecoming prince and riding in the parade. When asked what his favorite part about going to school was, he simply said, Mr. Woodard.
Peggy Roberts, Kyles mother, said she does not know of too many communities that would be as welcoming as Napoleon.
They are wonderful, she said. The students really took to him and made him feel part of the group. 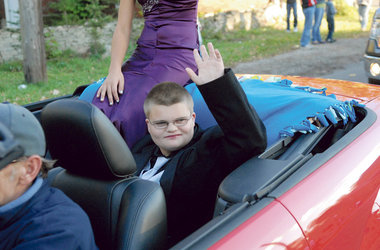 I chaperoned and helped with this homecoming for the band, and it was amazing! All the kids loved him, and included him in EVERYTHING! Thanks Napoleon!

thanks for sharing!! love love happy stories like that!

Thats heart warming and very comendable. Thanks for sharing.

With all the bullying stories in the news lately, it is nice to know that in other parts of the country, there are great victories being made in the name of love, tolerance, and acceptance of other members of our human race.

That's down by Jackson, isn't it?

O
Our new coop is finally together!
2