Something attacked my ducks last night (UPDATE: Saw what did it!)

Okay, so every night before bed I take the dog for a walk in the yard and put the ducks up. Last night, I was feeling really sick and couldn't do anything but lay down. I asked my mom to walk the dog and put the ducks up, and she came in and said they just wouldn't go. Normally she can shine a flashlight toward the pen and they'll just go in. We've never had a problem getting them to go in.

I just couldn't get up and go chase them in, so I figured they would be fine for a night. They sleep right up against the dog pen anyway, and the dogs usualy scare off any predators. I woke up in the middle of the night, and something just said that I should get up and go close the pen. Then I thought I was being stupid and went back to sleep. This morning, we get up (my mom at 6, me it 6:10) and I'm in the bathroom getting ready. She comes in holding one of my female muscovies and says that she was hurt, and one of my males had been killed.

They were laying right up against the dog pen, but whatever it was has enough nerve to go after them anyway. The female has eight deep puncture wounds, four on her back and four on her belly. She also had a baseball sized wound on her chest that was terrible. It ripped the skin completly open and exposed muscle, and the muscle had some tears in it too. We took her to the vet and he sewed up the big hole and a few of the little puncture wounds that were very deep. The rest he left open and said they would heal on there own.

Here is a pic of the poor girl. She is laying in my kitchen right now, resting. 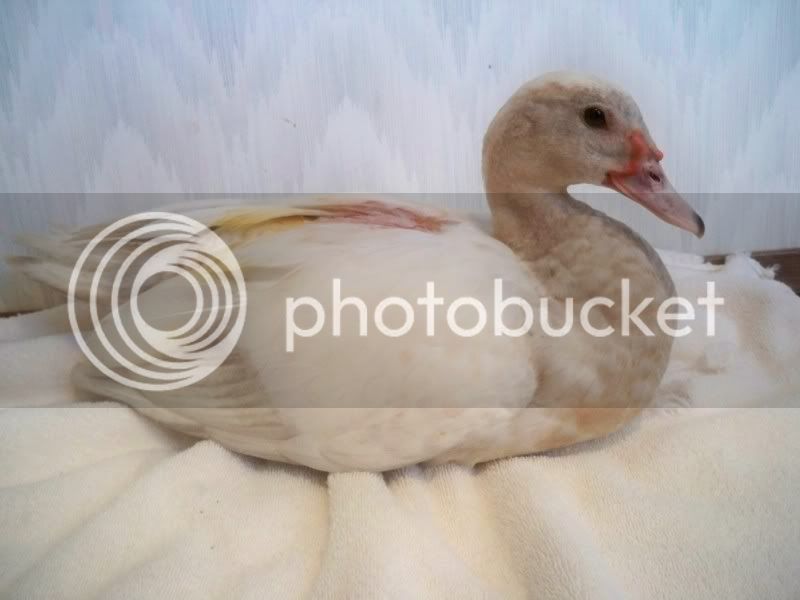 awww poor baby! any clue as to what got to your ducks?

The vet said it looked like some type of dog so it was either a dog, a coyote, or a fox. Whatever it was was able to take down a big male muscovy and get her in its mouth, and it was able to do all of that right in front of the dog pen.

The vet charged us 80 dollars, so now I'm going to HAVE to name her! Any suggestions? Something that means survivor, lucky, etc. It can't be Lucky though, because I had a dog named Lucky and I hate to duplicate names.

Oh, so sorry to hear about the loss of your drake. Those boys can be big so I wouldn't be surprised if it was a large dog or a coyote.
Hope your Scovy girl recovers O.K. She is a beauty!

She's lovely. I am glad she made it. Sorry about your drake.

How about calling her Star after the saying "count your lucky stars" .... well, thats a saying we have here in New Zealand anyway

How is she doing?

I am guessing she hasnt gone into shock by now after her big ordeal?

Well, I think she may be in a little bit of shock. She is drinking, but hasn't really eaten much. She is just laying on her towel in my kitchen, and that's what she's been doing all day. I'm sure she's in pain though, and very traumatized. The vet said she looks like she will be perfectly fine, so I think it'll just take a few days.

Im glad you have a vet on hand

I hope she has a quick and stress free recovery

B
Trying to find out what attacked the duck.......Graphic pictures
2

B
My duck was attacked by my dog

B
My Duck is Suddenly Mute