I have just gotten my first horse in 10 years. She was part of a package deal with an older quarter horse mare that is perfect for the stables. Megan is a 14 yr old Morgan mare and is supposedly trained for Western, English, Dressage, jumping etc. She has been abused, becasue she is very headshay and hard to catch. If you corner her, she turns and acts like she will charge(she doesn't but she can sure give a mean look!)you can see where at some point her halter had grown into her face or at least been tight enough to rub her raw everywhere it touched, because she has white hair all along the halter.
I have ridden her and she is very responsive, but obviously hasn't been ridden for a couple years. I just rode her up and down the trails, nothing fancy. The farrier went to shoe her and she really started acting up when he started hammering (cleaning and trimming was ok) so he put her in the stocks and before he could snug the top restraint, she reared and got a nice deep bruise right behind her withers, so it will be a while before I can ride her again. We turned her out in the pasture and after a few days, she would actually come to me for a treat and a pat. I tried lunging her on a lead line and she responds to voice commands, so she has had some good training at some point. She will just be a plaesure horse, no showing or anything, so I have plenty of time to work with her.
I am excited cuz she is the first horse I have owned since I sold my stable in 97. I have been working with other people's since then (along with a few camels, zebras and such)
Here are a couple pics I took when we went to look at them before we brought them to the stable. Oh yeah, she was majorly hard to load and does not like to go into stalls or any small space. Poor baby has obviously had some hard knocks! 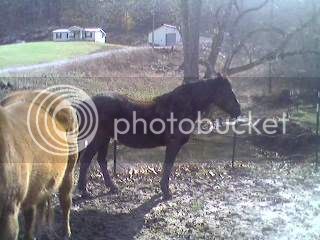 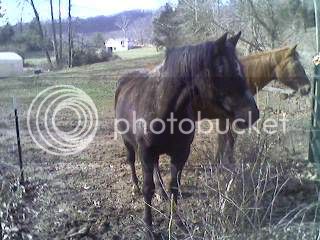 These pics don't do her justice, mud and all.
She is in the pasture across the road from the stables and she will run up and down the fence when she sees the other mare she was with, and the customers are always saying what a beautiful black "stallion" we have there!

I have a serious soft spot for Morgans...

She is lovely and sounds like she's been through the ringer. The great thing about animals is they do forgive, I'm sure with time and patience she'll come around.

Poor girl! I'm glad she's found a place of kindness.
When we got our old Morgan years ago, he had just come from an abusive situation (after having excellent homes his whole life prior to that). He had a congenital defect in his back legs that could be fixed with corrective shoeing so that he could be ridden without pain, but he couldn't jump any higher than 2'6" without feeling discomfort.
Apparently the idiots we got him from were convinced that he was just lazy and could be doing 4' or more, so they decided rapping was the answer. It broke my heart thinking of my little guy jumping with all his might only to be smacked each time by those darn fools. I wanted to beat them in the legs with a big stick! He took care of the situation himself by finally freaking out one day, tossing the junior rider they had on him and breaking her arm, then proceeding to rampage around the arena trashing the place. Good boy, I say! (That's how we ended up with him...for free!

)
The first time I got on him, he bolted for about a mile and ran me straight home and into his stall. Needless to say, I wasn't too excited by this new horse in the barn! However, my coach handed me an apple and told me to get back out there and make friends, so I did. When I opened the stall door, he was just cringing in the back corner, and my heart melted. We were best buddies from then on!