I sold these three rabbits to a local petstore that my niece works at. This is not the first time I have sold to them, though they don't know a ton about rabbits, they care about the animals in their care and seemed to take advice well. I show and raise rabbits, but they are still my pets and I love each and everyone of them and their offspring. All our rabbits are sold with a verbal contract that if for any reason they can no longer be cared for they are to be returned to us.

I found out from my niece that they still had three of these rabbits, at 3 and a half months old, two bucks and a doe, still together, and they where "missing" hair. They took them to the local vet (large animal vet/livestock vet) who gave some antibiotics and that was it. I contacted the owner of the pestore as soon as I Found out and got the rabbits back

I believe the hair loss is from stress. I didn't realize they had redone the setup at the store, and now the rabbits where being handled without supervision by anyone who wanted to handle them. While I was there waiting for the owner to get done with a customer there where about six kids between 8 and 12 surrounding the rabbits, picking them up turning them around trying to make them walk on their back legs. The rabbits just went with it, they didn't fight at all.

Now they are home, in their own cages with unlimited grass hay, 18% pellets and fresh water. They are very friendly bunnies, and love to run up and meet you. During their daily playtime (two hours each loose in the bunny barn) they are a ton of fun to watch as they jump and twist and leap around. They seem healthy enough and the vet said they had no internal or external parasites.

So here are the pictures, what do you think? Stress?? Anything I can do do make them heal faster? They are also a good pound under the weight of their litter mates who I kept. 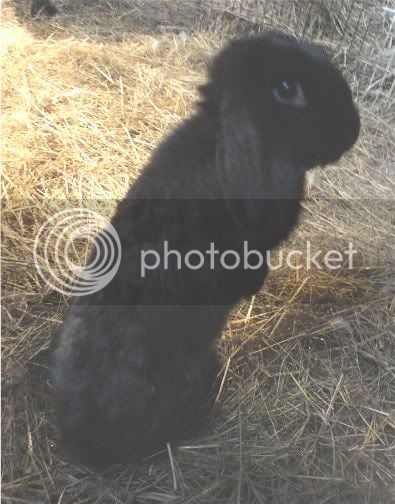 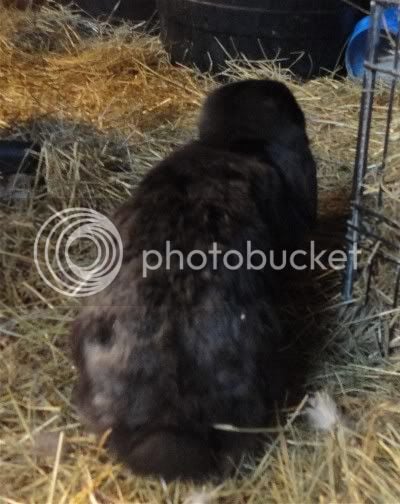 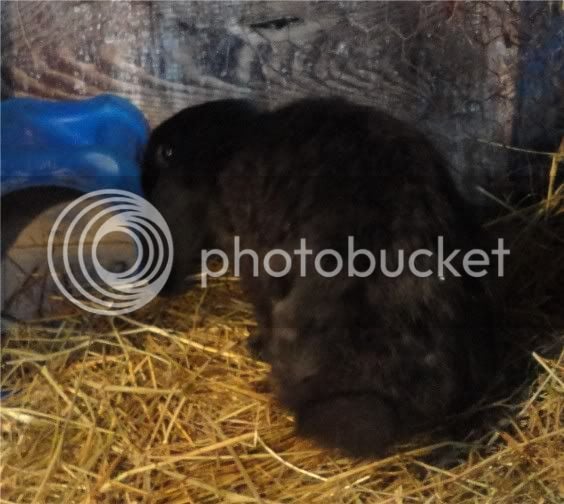 The gold tipped steel buck- ALF aka: Alfie - He is missing the most, he is also the sweetest, and a escape artist. I have had to change the latch on his door four times now, because he keeps opening it somehow! Never had a problem with it with any of our other bunnies before either. 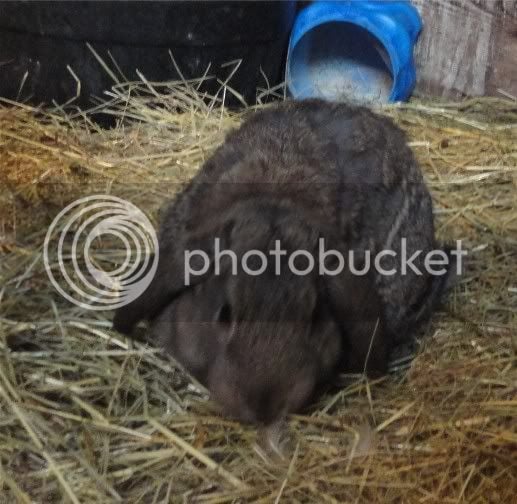 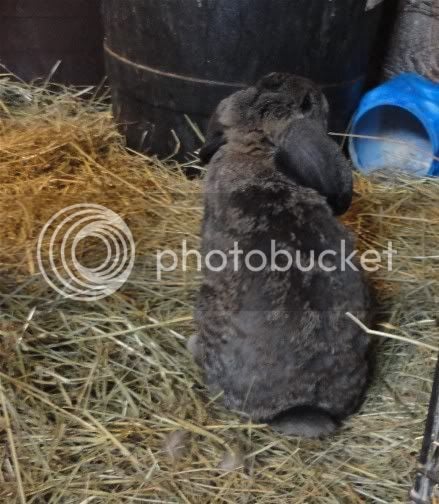 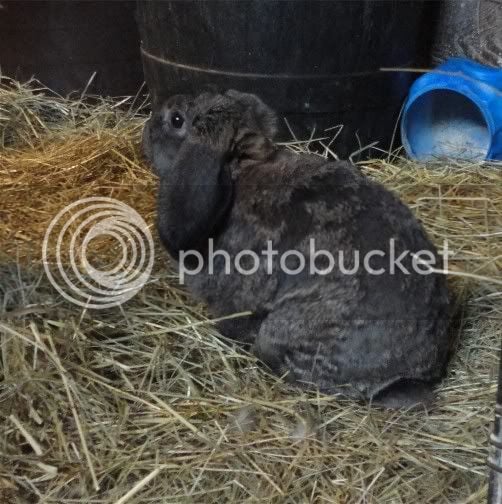 The Siamese sable buck- ALS aka: Alaska - His coat is the best, but he is the smallest, thinnest of them all. He is also so much lighter on color then his brother Apache who I kept ( and my camera died before I got a new picture of him) 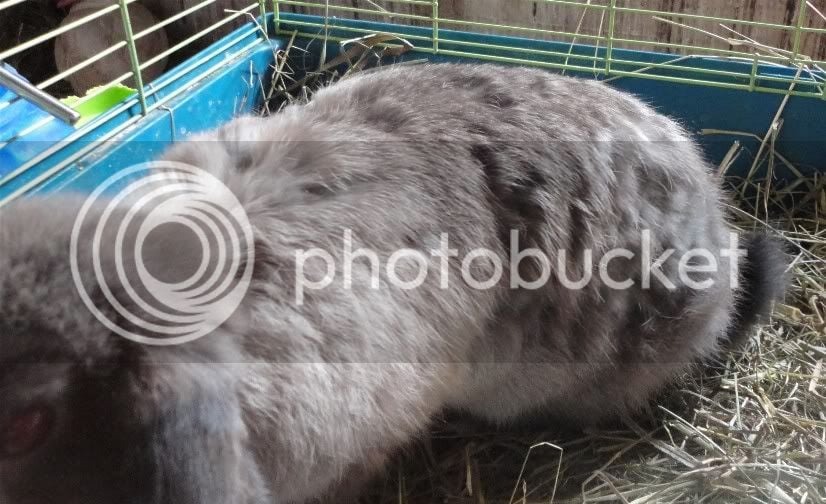 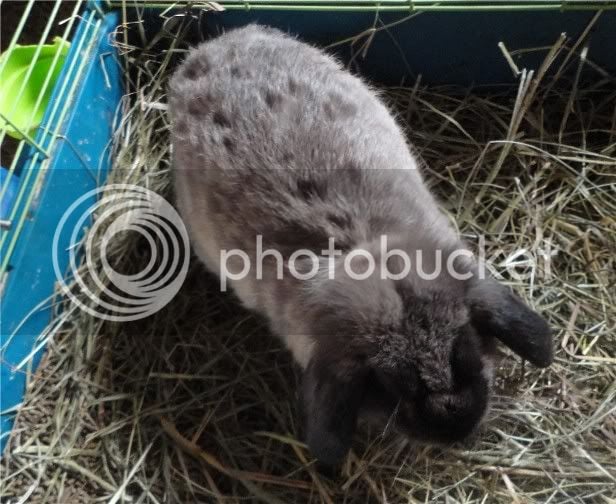 Alaska and Apache together when they where only 4 weeks old 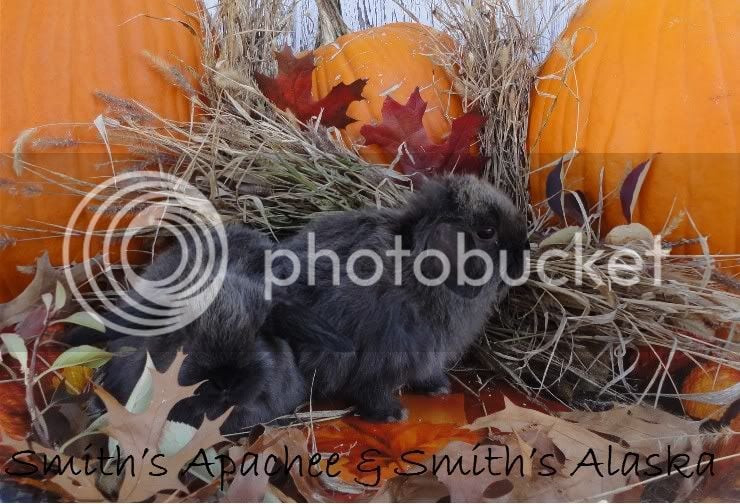 I take it the pet shop had all three rabbits in one large enclosure, together. I have seen Holland bucks this age ride cagemates incessantly; I also would suspect that the doe is pregnant at this point. Bucks frequently bite at the shoulders and back, and pull mouthfuls of hair out. A doe that is making a nest will pull fur from any rabbit that doesn't run away from her fast enough!

Based on my experience, I think that the hair loss is from cagemates pulling it. Now that you have them separated, I would expect the fur will grow back in a timely fashion.

Agree with previous poster I don't think its themselves pulling air but that hormones have increased and that they are doing it to each other by mating.

They should never allow rabbits that are over 2 months to be in the same cage! I would have a word with this store, and personally I would never give them any of my rabbits again. I personally wouldn't expect the doe to be pregnant quite yet since they still are under the 4 month mark- most rabbits will go into there first heat at 4-5 months of age. I would just watch her in case you see signs.

As for the hair, now that they are getting fresh food, water, hay, bedding and are separate from each other I am sure all this will stop and it will all come back. Poor bunnies!!!! Glad you found out before one ended up dead.

This pet store would be getting a mouthful from me. Were they trying to have more bunnies or what!?!!!!

In order to get these rabbits back I had to make a deal with them to provide three to four younger rabbits in April. I plan to do this, however these rabbits will go with contracts to the pet store stating if they are still there at 12 weeks they are to come back to me, unless separate cages can be provided. I am also going to be sending a packet of information with the rabbits. The people who run the store are not bad people, they just don't know anything about rabbits, and for whatever reason chose not to call or email me to ask.
She paid over $200 to take them to the vet (she thought the hair loss was from a parasite) The vet didn't know anything so didn't even tell her to separate them, just took stool and blood samples and charged her an outrageous amount. I don't feel like someone who is willing to pay that much to try to make them better, caused the harm on purpose. I feel like it is my fault for not better educating her. They have always sold much quicker before, and it never occurred to me to tell her she needed to separate them at 3 months. I am also going to talk with her about where they are being housed, perhaps discuss having three individual cages and then the one display one, rotating the rabbits so that no single rabbit is being handled and stressed all the time.