Hello everyone! I’m super new to quail and have been reading up on as much as I can and I thought I was pretty well prepared. Famous last words right? Haha.
My group is now 6 weeks old, and unfortunately mostly males. There are 3 I’m not sure of, and 4 definite males in the group (crowing and or producing foam).

they had been seemingly all getting along well until yesterday. I came home from work and they were all really quiet, with one of the gentlest ones hiding out in their house in the little nest box. That one is male and usually really active so I thought it was strange. No wounds or anything and he ran away from me once I opened the house up. Gave them their treats as usual, while I was working in the yard and all of a sudden there was a flurry of activity and a bunch of running and flapping going on in their pen. I went to see what the deal was to find my favorite (also a male) chasing one of the “unknown” birds around. Again, I thought it may be a female and he’s wanting to mate but she’s resistant. it managed to find a spot to hide and he gave up and went browsing for treats again like nothing happened.
Then, bedtime, they all came in their little house like always, I closed their door, and then the bird that had been hiding out was flying up into the netting over the top of their house repeatedly. I investigated and the aggressive male from earlier was beating him up, pecking the top of his head bloody. I removed the aggressive one and stuck him out in the run for overnight, and left everyone else in because they all still get along fine.
Fast forward to this morning - the moment I let the rest out, this guy came running over and started pecking the heck out of one of the smallest, possibly female birds.

so now I have a male quail in a box in my bedroom and I have no idea what to do with him. Lol. I was planning on keeping him as my breeding male because his colouring is really nice - he’s a silver pharaoh looking thing. But now I don’t know if he’ll be ok with any females I wind up with, since he’s being so aggressive. There’s no pattern, he seems to just choose a target and whale on them. Doesn’t matter where they are, If they’re near resources, or near other birds. There is only one other bird in there he won’t bother, an autumn amber male. They seem to coexist peacefully.

should I keep him separate and out of sight and earshot and try reintroducing him later? If so, how long to separate? Or is he just not a good candidate to keep in the flock?

I hatched these guys from shipped eggs, brooded them in the house until 3 weeks of age, then moved them out to their pen with a small heating pad for at night they could use if they wanted.
their pen is 2’ x 8’, 27” tall, and the attached house is 2’ x 2.5’ with a sloping roof. The short side is about 10” high Their feed and water is in the house but there is an additional waterer outside, and I give them feed, seeds, and mealworms in their pen to forage during the day. Inside the house there is the nestbox, otherwise it’s an open space. In the pen, I have 2 small shrubs for them to hide under, and a couple fabric plant pots to sneak into as well. Nothing has changed in the house or in the pen. Currently there are 7 birds in the enclosure, used to be 10 but sold 3 a week and a half ago. The pen is 1/2”HC on a wood frame, with a tarp on the top to keep the worst of the rain out and give them some shade during the day. Currently they’re on a 21% turkey starter with added mealworms and black soldier fly larvae, ground together to make a 26% combo. No feather picking or eating has been happening, they’ve all grown well, and I don’t think it’s feed related but like I said, super new to this.

the damage being done to the pecked birds is not bad, but I’m sure that’s only because I’ve removed first the victim and now the perpetrator as soon as I saw the behaviour. I’m concerned how far it would go without intervention.

this is the bigger, quiet male that was hiding, after he was pecked for about 10 seconds last night. Doesn’t look like much but when I removed him he was hunkered down with his eyes closed just taking it. 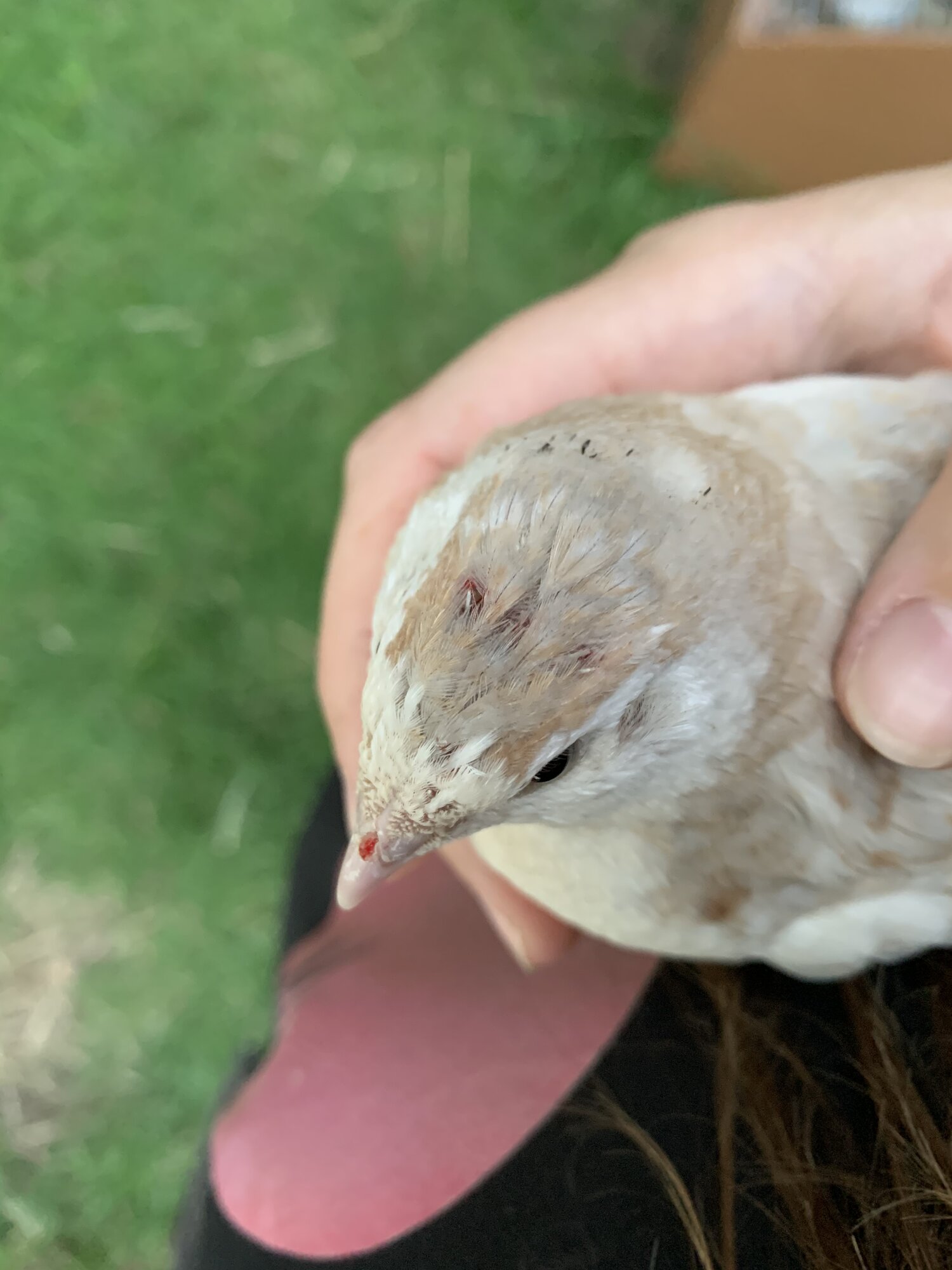 any help or suggestions would be much appreciated. I already have a house chicken and don’t reallly want a house quail but if there’s no way he can coexist peacefully that may be something that I would be willing to try... because again, he’s my favorite. Haha! Thanks everyone!

It sounds like they've reached the age where you're not going to be able to house them together anymore.

Do you have space for each male to have 3-5 hens in their own pen? If not, you're going to have to get rid of some males. Personally, I would keep one of the less aggressive males, but if this one is your favourite, then the others will have to go.

You can have more than one male in an enclosure, but it has to be large with plenty of hiding places.

Nabiki said:
It sounds like they've reached the age where you're not going to be able to house them together anymore.

Do you have space for each male to have 3-5 hens in their own pen? If not, you're going to have to get rid of some males. Personally, I would keep one of the less aggressive males, but if this one is your favourite, then the others will have to go.

You can have more than one male in an enclosure, but it has to be large with plenty of hiding places.
Click to expand...

That’s what I was afraid of.

I may just hang onto him in a separate pen for the time being until I know for sure what ratio I have in there and see how the other boys develop. My plan was to keep a total of 6 to make sure they had plenty of room, with one male and 5 females. but what I hatched doesn’t really go along with that.

I only like this guy because he’s friendly with me, comes running right away when he sees me and likes to be held. Better pet than breeding male I guess. Haha.
I was hoping the others would be more obvious showing their sexes but apparently they want to keep me guessing.

So it appears that there are a couple of the others that he doesn’t go after. 1 of the “I’m not sure” ones and the one Italian that I thought was male but maybe I’m wrong? Lol. They were cuddling in the dust bath so... I removed the one that was being picked on and put the grumpy pants back in and it’s definitely a lot less tense in there. He does still chase the autumn amber male and the little one I’m not sure on, but he doesn’t pin them down and beat them... do you think they’ll be ok if I only put in the ones he’s ok with, or is he eventually going to extend that behaviour to everybody at some point?

It's hard to say. Sometimes you get a pair of roos that will get along as long as there are enough hens. Sometimes it lasts, sometimes it doesn't.

Perhaps keep a close eye on them. I have some males that go fine together, but I have some that will attack other males.

So I’m down to 4 birds, rehomed 3 of the 4 known roos. I kept the aggressive guy because I like him best haha, but if he continues he’ll go in the freezer. Currently there’s him, the tux, the tiny silver, and the Italian that based on colouring I would swear is male, but no crowing and no foam coming from that guy (or either of the others). The tux will defend a specific corner of the pen from the others, including the silver roo, and they all leave it alone... no more fighting at all with the 4 of them though, so until I get more I guess this is the group I’m keeping. Lol.
M

We wound up having to cull/give away roos that just couldn't get along. The good news was that once we separated our roos totally, the ones who were aggressive did fine - we have a roo that for now has 1 hen, and another that now has 3, but are raising up some more hens for them. As long as he's got a GF, he's OK for the time being, even though he's crazy if he's in the pen with all of them.

my suggestions would be keep only one male..their fightings and rival attitude will stressed out the other hens and eventually wouldn't lay any eggs..so the next time you incubate some eggs pick the eggs which are like more firm(not pointy) at the tip..i've had successfully hatched female quail with this method
You must log in or register to reply here.
Share:
Reddit Pinterest Tumblr WhatsApp Email Link