Sunny has a touch of angel wing, how to cure?

Hey guys, it's been a while since I talked about Sunny. She was very sick the last several weeks, she had trouble breathing, wanted to be alone, very sleepy, lethargic, and she barely ate. I tried my best but couldn't find out what was wrong with her with no vet around. During the time she lost quite a bit of weight, and now only weighs about 3 pounds, and she's a pekin. (She is naturally small but her average weight was 5lbs) For a week she didn't touch her food and spent the whole day sleeping. So I fed her the only thing she would eat to keep her alive, mealworms/earthworms. After a week of the constant protein feedings, she started to perk up and would eat wet layer crumble. And at the moment she's pretty much recovered, breathing normally, active, eating a nice amount, preening, and alert. But just a few days ago after a slight molt she has devleoped two small wing feathers that point outward; Angel wing. I guess that proves AW is caused by too much protein, cause that's certainly what I fed her. I've since stopped giving her insect treats, but she does find a few worms everyday, I can't prevent that though since my yard is so worm friendly with all the chicken poop and food that soaks into the ground. It isn't deadly, correct? How do I cure it? It isn't very noticeable atm but I certainley don't want to progress any further.

Here's a pic taken 3 weeks ago when she started to show signs of improvement. Her first birthday was yesterday, she's now 1 year old. 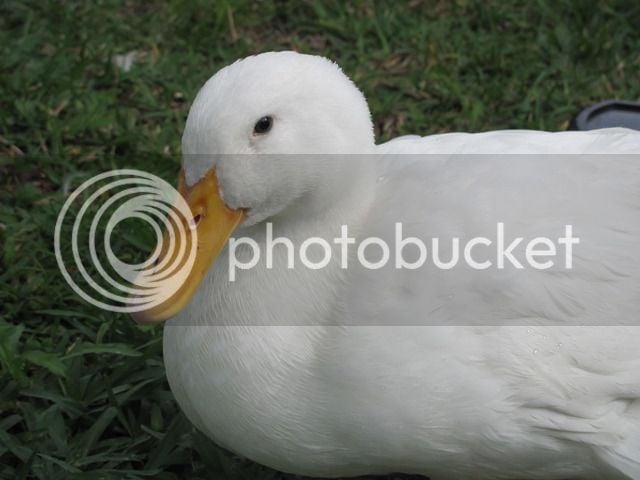 i haven't had this issue but i've seen that you are supposed to tape her wings to her body.. i'm sure someone with more experience will come along.

give sunny a hug for me

I am by NO MEANS an expert on angel wing, having only dealt with it twice (and only because I took some advice to not worry about protein levels and sure enough, I ended up with angel wing in my young flock). But my understanding is that if it's only a few feathers sticking out a little bit, it's probably not true angel wing, and will correct itself. Certainly that was true of my birds as they grew older--several of them had what looked like angel wing but then corrected itself. In fact, one of the two that had true angel wing self-corrected. The other one still has some feathers sticking out, but is improving.

I tried to treat with vet wrap and medical tape and ace bandages (not in that order), but I couldn't get even the waterproof medical tape to stay on for long--the birds kept sliding out of them. So in the end I gave up and decided to let things turn out however they turn out.

Good luck--I hope someone with more experience pipes up soon and corrects me on any wrong notions I have in here.

My Own Personal Zoo

I didn't realize angel wing could happen at an adult age? I thought this was a developmental issue, as the blood filled wing feathers began to protrude and weigh down the wings causing them to hang outward, rather than tucked into the body, since the bones were not fully hardened yet? Very interesting!

Well I'm no expert either, but Q had angelwing as a youngster, and we did wrap her. We didn't tape the wings, instead we positioned the wings correctly, and wrapped her one time around with vet wrap. Both wings, pulled in correctly against the body. Like this:' 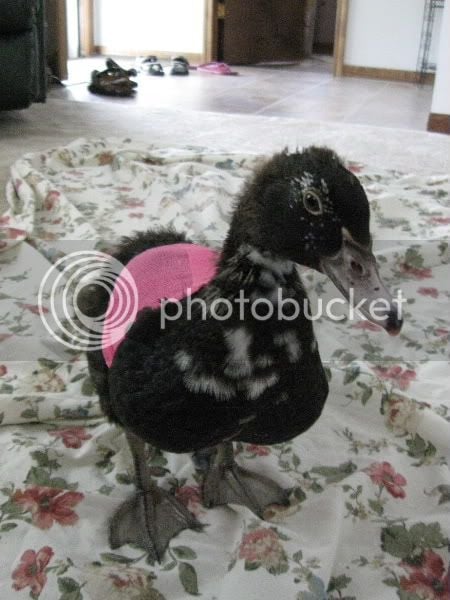 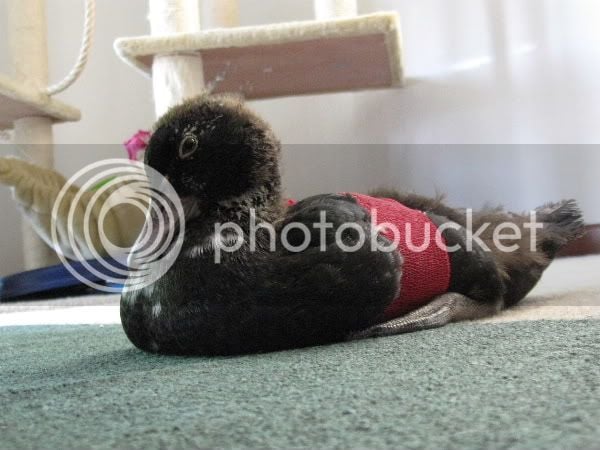 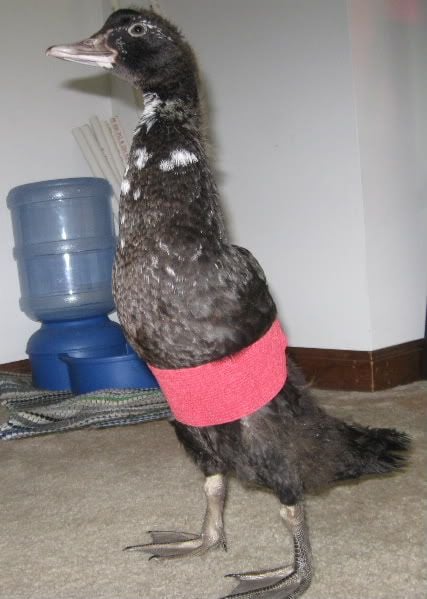 Here were her wings before we started wrapping them: 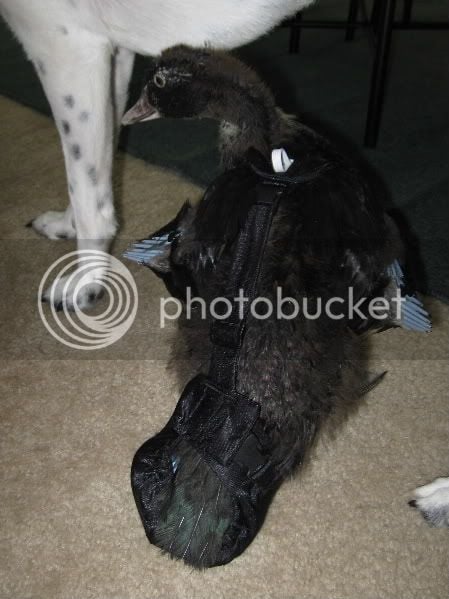 Nice picture showing the wrap and the angle wings. I do not think Sunny has Angel wings, simply because of the age. I think the weight loss and the new feathers coming in may make it appear like it. I bet it will resolve over the next couple of weeks.
Katharina

My Own Personal Zoo

Glad you liked the pics

Q's angelwing was completely corrected with this method, we wrapped her for about a week and a half. I can't say she left it on faithfully, she did pull it off a few times. But for the most part, she was very accepting and it worked very well for us. Plus it was easily removed so she could stretch her wings a couple times a day so they didn't seize up on her, and no tacky tape to pull out feathers when removed.

MY call duck has had that since i got her (as an adult)....i thought it was just some deformity. doesn't seem to bother her at all. never knew what it was called either.
Quote:

Typically only growing ducks will get angel wing, when their feathers are growing in. The feathers tend to grow to fast before the tendons in the wing can get big/strong enough to keep them held against their bodies. That's why they'll grow out at weird angles. Since sunny is older, it probably is just them coming in a little weird, but not angel wing (for some reason the picture won't reload smaller for me and her wings are showing in the picture, if someone who cans see and repost it smaller that'd be great!)

Did sunny go through a molt recently? Did she stop or start laying eggs? That can also account for her weight being low too... My ducks Ming mei and Vinny will get rather scrawny looking during/after molts and long bouts of egg laying.

I wouldn't worry about her catching her own worms in the yard, it's good foraging and fun for her. I would up her greens if possible, giving her lettuces, kale, collard greens, mustard greens, turnip greens, etc....

If her wings continue to be a problem, say in another 2 weeks or so, or have gotten worse, PM me okay? Angel Wing is a nightmare when you have hatched out over 50 English Grey Calls. Yes, I'll brag because all were hatched in a HOVA-BATOR out of one drake and two hens over two months. Fortunately only 4 have had the issue and I am thankful because I was expecting more. The "instructions" that came with my original 3 breeders from eFowl said lower the protein to 15% after 3 weeks. I feed them a 22% protein game bird mash for the first 3 weeks. The lowest mash I could find was 18 so that is what they have been eating since 3 weeks.

Didn't do the vet wrap but found this new waterproof tape "Nexcare Bandages" at Dollar General for $3.50 and just taped the last joint inside the shoulder. They can still "try" and flap their wings and since it is almost hidden under the other feathers, the other ducks don't pick on them.

I'll try and download a pic but I'm not very good at this. Good luck all. 5
Can anyone tell me if this is angel wing?

S
Does my angel have angel wings?