Switched to sand, but...

Hi everyone! I have a 4x8 raised coop, with an 8x10 covered run, inhabited by 6 lovely girls who are just starting to lay. All summer, we used pine shavings in the coop, and left the run as bare dirt. When I cleaned out the coop every month or so (it stayed pretty clean since I have poop boards under the roosts), I would just sweep the used shavings in to the run. I never really noticed much odour, and the girls were happy to peck around and bathe in the dirt. However, the dirt in that area is icing sugar fine, and poofs everywhere! And the shavings were making a mess, blowing out of the run. So after much research, I decided to try sand in both the coop and the run; it sounded like it would overall be cleaner, less dusty, drier, and would maintain a more stable temperature. It's been a week now, and I love certain things about it: the run is no longer dusty, and the coop and run are super clean because I scoop the poops out every day. The girls no longer dust bathe in the run, though; they now save that for outside in my garden beds when they are free ranging, so it appears that they prefer dirt. The big question I have, the big doubt in my mind, is regarding temperatures through the winter. The sand, although dry, is much colder to the touch, compared to the shavings that I still have in my external nesting boxes. I had read that sand has a higher thermal mass than shavings and will therefore keep coop temps more stable, but even if it doesn't freeze, I worry that it's going to be pretty cold to walk around on in the winter. FYI, I don't plan on heating the coop; it is draft-free, and well-ventilated along the top. I live in the southern interior of BC; in the summer, we can get temps as high as the high 30s celsius, and in winter, although the average is between -5 and -15C, it can occasionally get as cold as -20 or -25C.
So it all boils down to this: even with all the other benefits of sand, is it going to be too cold for my girls?? I understand that bedding is intended to keep the coop dry, not warm the coop. But I worry that it's actually going to make it colder for the girls. I could sweep the sand in the coop into the run, dig it into the dirt (which will hopefully still help with the dust issue of plain dirt), or even add some to the garden; and then replace the coop sand with shavings again, going back to my previous maintenance methods. The deep litter method doesn't interest me, so if I do shavings I will be cleaning the coop regularly.
Super long post!! What should I do?

Does your ground stay frozen all winter? You could put down hay or straw in the run during the winter than clean it up come spring. Sand can be cold on chickens feet. 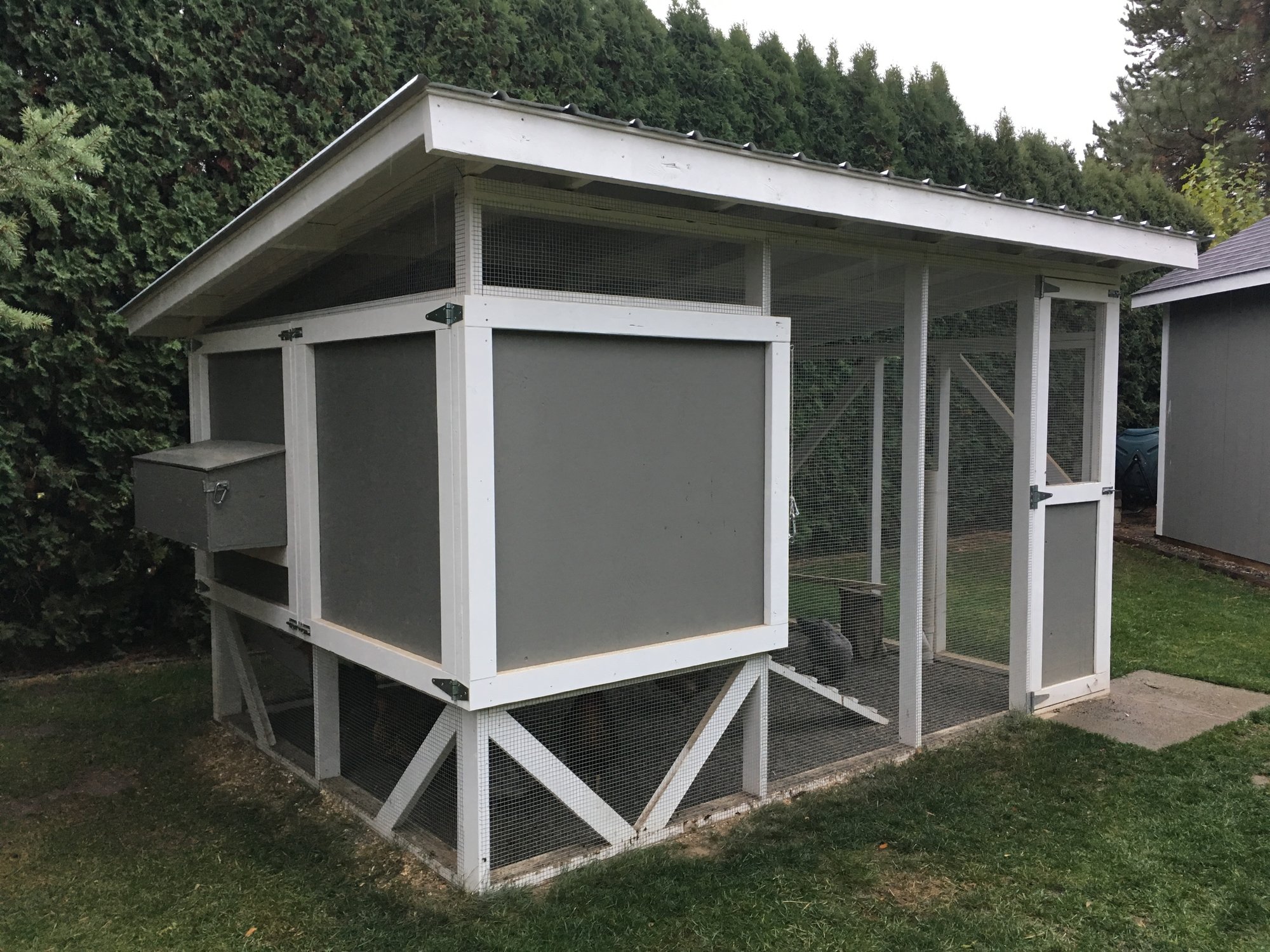 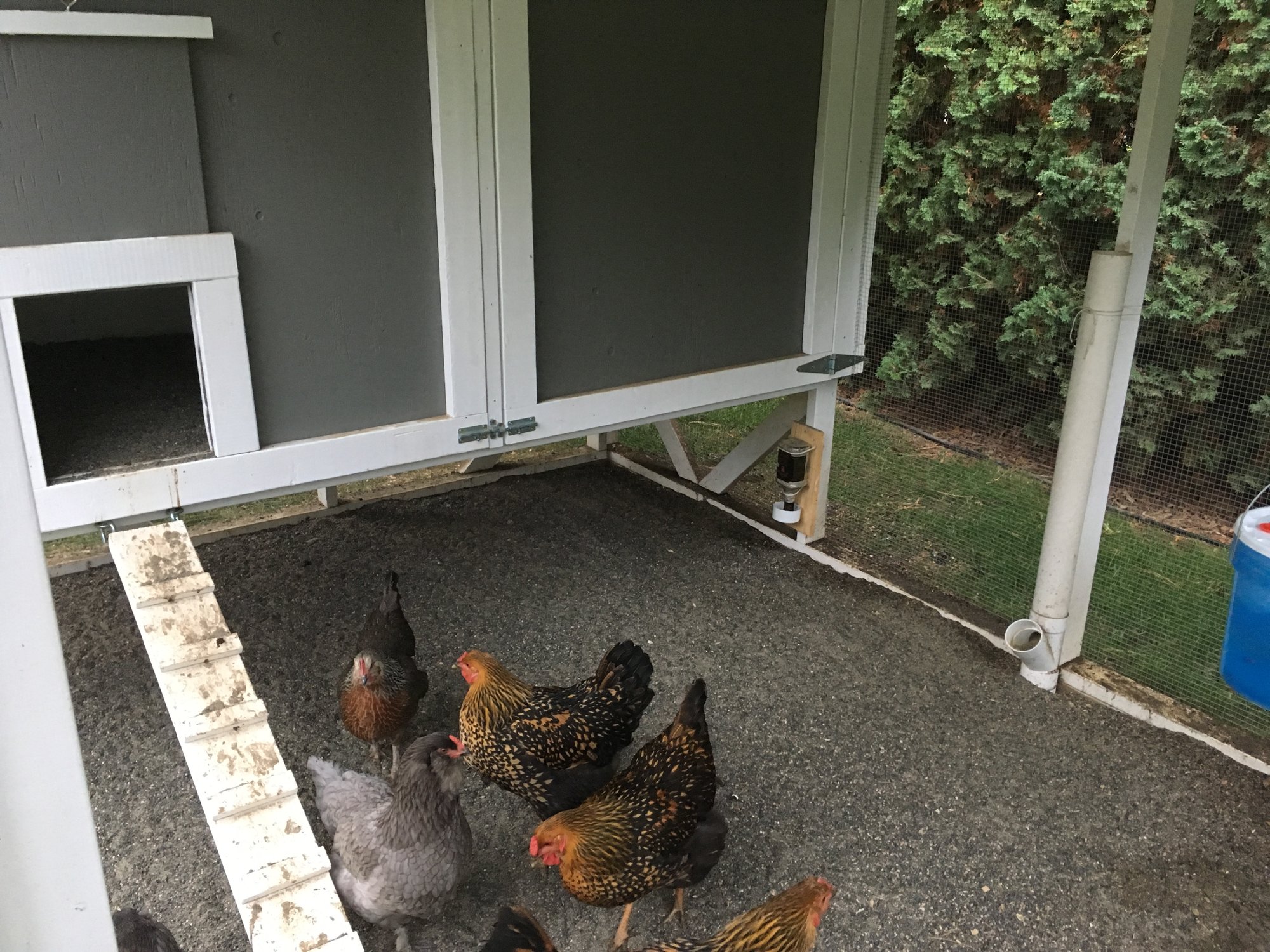 Here's a few pictures of our coop

We're planning to put a window in the short end of the coop to take advantage of morning sunshine, but I'm not sure how much difference that will make in regards to inside temp

I wouldn't use sand in the coop personally but you will have to see how it goes. If it's too cold your chickens will hold legs up to warm them, or lay down a lot to warm them.

I'm attempting sand in the coop this winter myself. My chickens don't have access to under the coop so I'm going to shove some straw bales under it.

You could try tarps around the base of the run to block wind blowing in. Or people use plastic roofing panels.
http://www.homedepot.com/p/Palruf-26-in-x-8-ft-Clear-PVC-Roof-Panel-100423/100038031 Something like what I linked.

If you see them standing on one leg or hunkered down to keep their feet warm add shavings.

You won't know till you try. Let me know what you try and how it works. We can all learn from each other.

FlyingNunFarm said:
I'm attempting sand in the coop this winter myself. My chickens don't have access to under the coop so I'm going to shove some straw bales under it.

You could try tarps around the base of the run to block wind blowing in. Or people use plastic roofing panels.
http://www.homedepot.com/p/Palruf-26-in-x-8-ft-Clear-PVC-Roof-Panel-100423/100038031 Something like what I linked.

If you see them standing on one leg or hunkered down to keep their feet warm add shavings.

You won't know till you try. Let me know what you try and how it works. We can all learn from each other.

Thanks for that suggestion! I was actually thinking I'd do that - we have lots of poly plastic, so I was planning to wrap three sides of the run under the coop, and maybe put straw bales up against the plastic. Although I'm not sure how much that will help, if the fourth side, into the run, will still be open!

I will definitely keep the thread updated with how things go, whatever I decide. Hopefully some more experts will weigh in before the weather gets really cold!

So I noticed one of my chickens standing on one leg in the run this morning... And that's a vote against sand. And I have to admit, I'm already getting a bit tired of scooping poops, and am not looking forward to doing it in the winter!
So here's a question: if I decide to switch back to shavings, how should I manage the run? Could I put all the sand in there, dig it down to mix it in with the dirt, and then begin adding mulch type materials over top of that (shavings, fall leaves, pine needles, etc)? Or will I need to remove the sand completely?

How thick is the sand?

If it isn't too thick I would just start the deep litter. This time of year I load my runs with fall leaves mixed with grass clippings. Winter means hay gets put down. Spring bring weeds, and any edging trimmings, and summer is weeds, spent mulch, some grass clippings, and any extra produce.
You must log in or register to reply here.
Share:
Reddit Pinterest Tumblr WhatsApp Email Link