The chick who came back from the dead.....

I came home last Thursday from a week away in London, to find that my husband had (two days before) hatched an egg that had been abandoned by its mother, in our little incubator.

All was well until this morning - he was running around, feeding well, enjoying an outing in one of my flower beds, he liked to be held in my hands and would drop off to sleep, chirped very loudly - altogether hunky dory.

Then this morning, he seemed a bit dodgy. Wasn't walking or chirping, seemed very weak. I lifted him out of his little cage (a former hamster cage that I put next to the boiler, with water and feed and things to keep him warm). He gave one peep, and then went rigid - legs stuck out straight behind him and eyes wide open. I stroked him, but no reaction - so I was sure he was dead. I put the poor little thing back in his cage to bury him later.

I then went out to walk the dog and when I came home about two hours later, got ready to bury the still rigid and unresponding chick, lying inert in his cage . BUT as I picked him up, he moved!!!!!!! Couldn't believe my eyes!!! I quickly put him in the incubator to really heat him up and he is now back in the cage, with the incubator lamp to heat him up - chirping as loudly as ever! He still seems a bit wobbly on his legs.

My worry is that he isn't drinking enough and that is the cause of his "near death experience". I have tried dipping his beak in water, I've put water onto a little cotton bud and dripped it into his beak. I've also put food in his water and water in his food, so that when he takes on or the other he gets both (if you see what I mean!).

I really hope he is going to survive (he's half Marans and half Orpington)..... any ideas or hints would be really welcome!

Amazing story! I hope you figure out what is wrong.

I had a somewhat similar experience. I got 6 silkies 3 days old. I didn't have a heat lamp so I used a hot water jug heated with an aquarium heater. Water was at 95° and I covered the jug with a towel so the chicks could snuggle together under and next to it. After a couple days we got up and found one dead, next day it was two. When the 4th chick got limp I remembered an old round shop light in my garage. I got it and used a 100w incandescent bulb above the chicks. The remaining two quickly ran under the light snuggled together. I put the limp baby with them and within 20 minutes it started wobbling around. After a couple hours it acted pretty much normal.

I think the 3 that died was from being chilled. My lesson about plenty of heat was duly learned. Check the actual temperature and see if its warm enough for your babies. Good luck.

In this cage, you do have a heat source, yes? Babies need to be kept warm....

Some type of thermometer in the brooder is so very helpful, otherwise it's a guessing game. 95 for new babies, reduce by 5 degrees each week. On very warm summer days in the house ( if you are not running an AC) they can prolly do without the heat once they are 3 weeks old. Mine are at that stage now. Without the thermometer, I would not have a clue, other than their
behavior. A chilled chick will get lethargic and not eat or drink, not good.

Many thanks for all the replies - and I think you are right.... a severe case of hypothermia! Although it seemed very warm in his cage in the boiler room,( I even put in a small teddy bear to take the place of the mother hen

), it obviously wasn't warm enough for a two day old chicken. The heater from the incubator is now in the cage and is set at 35° Celsius (I checked the conversion to Fahrenheit and that is 95°). The chick went straight under the heat (he's obviously cleverer than I am) and is now starting to drink and eat again. When I think I very nearly buried the chick - luckily I think the heat from my hands woke him up. I will never make the same mistake again! And thank goodness for this forum!!
Thank you all again for your help - and I'll keep you posted on his health!
Tilly

i realize you have just one chick, but anyway, you can still use this: 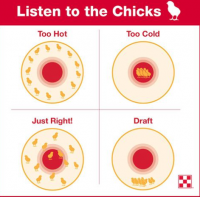 I'm not sure what happened to your chicks, but I don't think it was chill. I just raised three chicks from hatching to about a month old now completely without a heat lamp -mine was broken because we put it outside for our bigger chickens and they knocked it down. They were kept in my room, which is generally about 70 degrees, all the time once they left the incubator, and they were all perfectly fine so long as they could cuddle with each other and the stuffed cat I gave them because they would chirp in protest whenever they couldn't stand under my hand like it was a hen. They're well feathered and live in an outside brooder now, waiting to be large enough to join my other chickens outside.
My grandfather, though, just had 99/100 chicks die mysteriously, and the company he got them from tried to say they were too cold and refuse to replace them, however we eventually got them to do so. I think it is in part an excuse to avoid refunding for giving people dying chicks.
I say I don't think it's cold killing them, besides from personal experience, because in the wild a hen would not be able to keep her chicks constantly at 95 degrees. She leads them around outside most of the day, every day, no matter the temperature. Therefore if the chicks could die from cool but not extremely cold temperatures, chickens probably would have died out. That, or chicks have gotten much weaker since humans have been raising them. It's the same with any kind of fowl, from chickens to ducks and geese. I don't really get why we keep them at such high temperatures constantly, and for the waterfowl we deny them the ability to swim, for such a long time, while in the wild they would be out in the world doing whatever their parent is doing by then. It seems to work just fine for them too; the main cause of death for their babies seems to be predators, rather than disease or improper care.

I'm glad your babies recovered though, I've had a few like that. One had splay legs and couldn't move away from the heat, overheated and nearly died. I cooled her in a bowl of water and splinted her legs and she was fine.
Another was trapped in its egg, and once it was pried out it lay motionless, only breathing, for a whole day.. She's almost a fully grown hen now.
Also, egg yolk is a good food for weak chicks, gives them food and liquids at the same time. Besides beak dipping, this is what Sponge [the trapped chick from above] lived on until she learned to pick up and eat dry food on her own. I put it on a spoon and put her beak in it so she would drink it.

If 'he' survives and turns out to be a 'Roo, name him Lazarus.

M
5 week old chick doesn't want to drink water , and crying when poops. what to do? any trick to make it drink water?
2

My chick is not dead!! We can't find him anywhere though.
2