The DUMBEST thing I've ever heard somebody say about Chickens...READ!

Alright everybody. Brace yourselves. The other day I was selling some eggs to a lady.She asked and said some of the stupidest things EVER! Here goes.
When I was showing her my chickens she asks
~~~~~~~~~~~~~~~~~~~~~~~~~~~~~~~~~~~~~~~
Why is that one black and that one brown?
Can that duck humb the chicken and make a "chuck"?
Why do they have red things on their faces?
Can they fly up to the trees?
Why do they have 4 toes instead of 5?
~~~~~~~~~~~~~~~~~~~~~~~~~~~~~Later when I gave her the eggs, she shocked me with the questions she asked. she said...
OK, I don't want my fridge to be crawling with 12 chicks. What can I do so they won't hatch? I said, -chuckling-Well what makes you think they will hatch? She said. Well they are chicken eggs right? Chicken eggs hatch? I told her that i have no rooster so there is no way they can hatch. She then said that all eggs layed by birds that people raise hatch. Anyway, Then I told her that eggs from the store are from chickens and they don't hatch. Her jaw dropped to te floor. She said, I THOUGH HUMANS MADE THOSE EGGS BECAUSE THEY WERE WHITE!? I THOUGHT CHICKENS ONLY LAID BROWN EGGS! WOAH!......My brother than asked her,Are you sure you can even COOK these eggs? She said her husband would do it. Then she payed and left. Those 45 minutes made my day! I felt smart ^_^

It'd kind of funny and sad at the same time. Funny because this woman was completely clueless about this stuff. But sad because so many people don't know where their food comes from.
Last edited: Sep 3, 2011

Omg, I wouldve had a tough time not just being completely rude and asking if she had a brain. Never ceases to amaze me how stupid some people are.
Last edited: Sep 3, 2011

Well my kids reminded me the other day that there are no dumb questions. LOL But seriously some of her questions were not so dumb. Some chickens do fly into trees ( I definitely have some that will) and some chickens do have 5 toes (have some of those too). I have heard a lot of people not realize you need a rooster to have fertile eggs. The rest however I would probably have had a hard time not laughing.

Quote:
Yeah, you're right, some of those weren't dumb. Sorry, i'm judgemental sometimes and I really shouldnt be. I'm working on it!

Excuse me, but the blonde reference was totally uncalled for. Not all blondes are stupid. I should know, I am blonde and I am certainly not stupid. Her being blonde had nothing to do with it, perhaps she was just ignorant.

Some of those questions ARE surprising coming from an adult!

I was asked a short while ago by a very intelligent (but not au fait with chickens) person if my eggs were safe to eat as I had several roos. So I suggested that we open one up to see what there was....and the egg I opened was fertile with the usual little 'doughnut'. She was amazed, expecting to see a small chick.

I remember, though, before I started to keep chickens, that I thought that most chickens had yellow chicks and hens generally looked the same. I was a Townie, and nobody around me kept poultry. Glad to say I know different now and love to educate folk about chickens (to the best of my abilities).

Oh and with regards to blondes.....here's my Blondie and he is quite bright (for a chicken!). 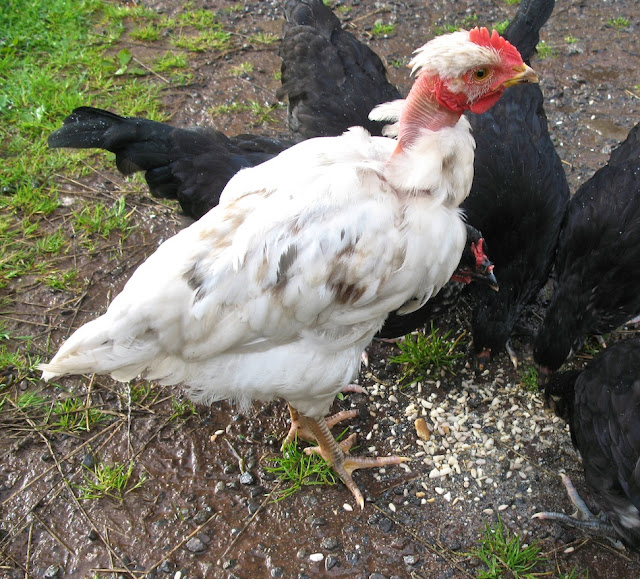 I woulnd't have been so patient...

My 11 year old nephew stopped by a couple weeks ago. He never seen a chicken in person before. So he was quite amazed at seeing the girls doing their thing in the yard. He asked me why I have chickens. I told him for the eggs. He asked what I did with the eggs. I thought he was joking but I answered anyways and said we eat them. He was shocked and said I can't do that and it was gross. I was puzzled and asked him what he meant, he said you can only eat eggs from the store. I asked him where do you think they get the eggs in the store. He said he didn't know but he knew they didn't come from chickens.

Quote:
It's just supposed to be funny. Some people say that, but don't mean for it to offend anybody. But yeah, that was uncalled for..
Last edited: Sep 3, 2011