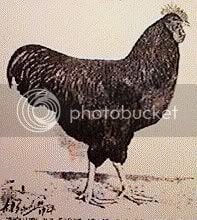 After two days of thinking of how I would start a new thread I came up with this title the Official Heritage Rhode Island Red Site.

Today the Rhode Island Red large fowl with the single comb is a very rare breed of poultry. Maybe during the months of January and February you might be able to count 200 adult birds and during the summer months maybe there will be a thousand in the USA. That is very rare.

The Rose Comb Rhode Island Red which is the same bird for type and color as the Singe Comb may have only about 50 during the winter months. They are not all gone but so scarce.

These Rhode Island Reds which I am talking about are not the kind you buy in a feed store or order from most common Hatchery Catalogs. These are called Production Reds. They are not breed to the Standard of Perfection and if they were entered in a poultry show a judge would have to disqualify most of the birds entered. Many call them Rhode Island Reds but they are far from the breed that was invented in the 1850s and that where once the number one popular breed in the country if not the world.

So with that said, I will try to steer this thread on the old fashion dark dark feathered Rhode Island Red that has a brick shape which is unique to the breed. If you come on here and post a picture of your production reds that is ok, but those who will learn what they really look like will refresh their minds in what I am trying to demonstrate and teach to you. I am not going to try to convert you from production reds to the Heritage Rhode Island Reds. However, there is about 1% out there who want the real true to breed Standard Rhode Island Reds.

In this thread we will try to help you get started with them if you really want to breed them and then try to teach you how to breed these rare birds for color and breed type. Its not that hard to do. There is just laws in breeding you have to follow and if you do what has been passed down by our old timers the masters you in time will reach success.

I will now post a few pictures of some of my favorite pictures I have been sent this year and then as this thread develops I will get you in touch with the few master breeders to try to help you locate them and get started this fall. If you have the old fashion dark brick shaped Rhode Island Reds please post your pictures for us or tell us stories of someone you may have know who once had this old time breed. We had such success with the Heritage Large Fowl Site I thought I would try to introduce you to the Real Rhode Island Reds that a few of us have breed over the last twenty years. Bob
Last edited: Oct 7, 2010

i truely love my Heritage RIR's....
i have a young flock that are just turning 6 months old & molting.
here are a couple of pics from about a 2-3 weeks ago
i can't wait for them to completely feather out, i believe my rooster will eventually turn into a really handsome guy.
i really hope i made the right decision picking him out of the bunch. Here are some of my Rose Comb Reds. It would be my hope that on this site as we post pictures of our birds (I will get to it) we can comment on what we see in terms of type and color and feather quality etc. and perhaps Bob and Chris and of course others with lots of experience can let us know if what we see is what they observe as well.

I will begin with Stevin's birds as I see them. I think the Cockeral appears to have a smaller head than I would like, I wish he had a flatter back, it may be the pic but I dont like his beak very much as it seems to prominate to me. He does appear to have great sheen in spite of his molting and from my stanpoint looks like he could grow into a pretty good brick type.

I cant tell much about the female, except that she also seems to have a bit of a hump in her back, but appears to have great feather quality I wish I could see a side view.

I have seen Chris's birds many times and admire their type, I love the flat backs. I believe Chris has indicated that he is working on feather quality with his birds.

Others? I trust none of will be offended at having our birds critiqued by someone with a very critical eye. NYREDS should weigh in here some time as well.

Quote:
Yes I think we finally have the "poor Feathering" problem figured out. Between talking to Bob, Bill, hours searching the internet, talking to the good people at CROhio and about a hour and a half talk to
Tim Bowls at my county fair that he way judging I have come to the conclusion that I was not feeding enough Fat in my feed, I had plenty of protein but I needed to up the fat in the feed.
The birds are now on the same Game Bird feed but I now add a good bit more grains.

So we shale see how they turn out in the Spring when they molt out.

The first birds single comb are young the male will have a good comb with time they are just young. When you see the pullet with a good red comb and laying her tenth egg she will be in full bloom. The male has still got weeks of time to get his tail feathers in. They are true to breed Heritage Rhode Island Reds. For color the key is the color of their beaks. Look how black or horn colored thier beaks are. Then look at thier leg color horn colored. These came from a good strain of Single Comb Reds.

The Rose Comb pictures are priceless. Where can someone who is reading this thread for the first time and reads my introduction that their are ony 50 Large Fowl Rose Reds left in the winter. These are some of those 50. Also, they are going to say to themselves I did not know there was such a chicken like me with Delewares.

Look at the picture about four pictures down of the Rose Comb female. Look at the color on the female on the left and her even dark Red Color. Then look at her type and her tight feathers on her body. I have ony seen one female like her in twenty years like her in large fowl and that was the old strain of Jimmy Swanson of Floridia. Jimmy had some killers about three to five years ago but was forced out because of zoning. She looks like a true old fashion Rhode Island Red Rose Comb . All honesty I have not seen any female Rose Comb this good in 50 years of looking at pictures. Thanks for your support. I dont think this thread will be as busy as the Heritage thread because it will grow with time. This thread is more of a education type thread to let people know what a real old fashion Rhode Island Red looks like. bob
Last edited: Oct 8, 2010

I have a few Heritage RIRs. I have only one rosecomb rooster (picture #3), and he is smaller than the others. I tried to get pictures of the roosters, but they did not cooperate very well. Is the tail too high on this first one? kathy,
The hen in the 5th picture is out of Pine Grove?

Quote:
No. All the pullets came from Dick Horstman. I got only roosters from William's.

They are all 6 months old. I have 8 pullets and 8 roosters. Actually, today a few roosters are going to auction.
Last edited: Oct 8, 2010