A few years ago, longtime friends of my parents decided to move to the country and raise chickens. What started as 8 chickens turned into 200+, with 14 different breeds, turkeys, rabbits, goats, a chinchilla and 2 dogs. They’re now a certified farm and sell around 8 dozen eating eggs per week and hatched over 400 chicks this winter/spring. They has such a close bond with our family and love us so much that they decided to help me achieve one of my dreams- of being a chicken owner. (Just for the summer since my mom doesn’t want to take care of them in the winter)

April 24 2021, a day after my birthday, we picked up 5 chickens from them. One of the chickens - a silkie rooster - came from her friend since she was worried she wasn’t giving us enough birds. So off we went with a silkie rooster and hen, a lavender orpington pullet, an ameracauna mix pullet and a 9 week old rhode island red pullet. We were so proud to let our new pets explore our shed converted into a coop which in the weeks before we had worked really hard at. 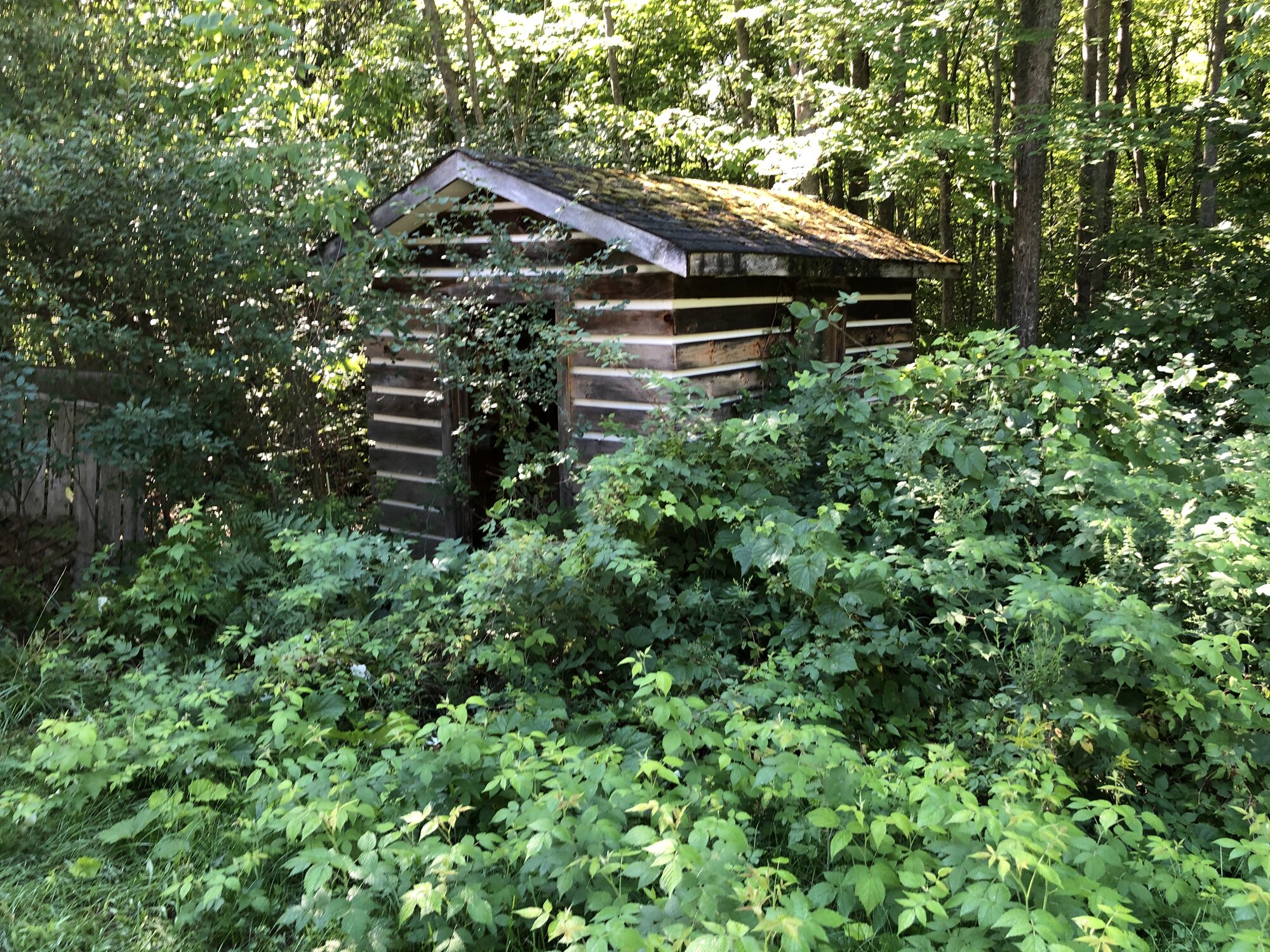 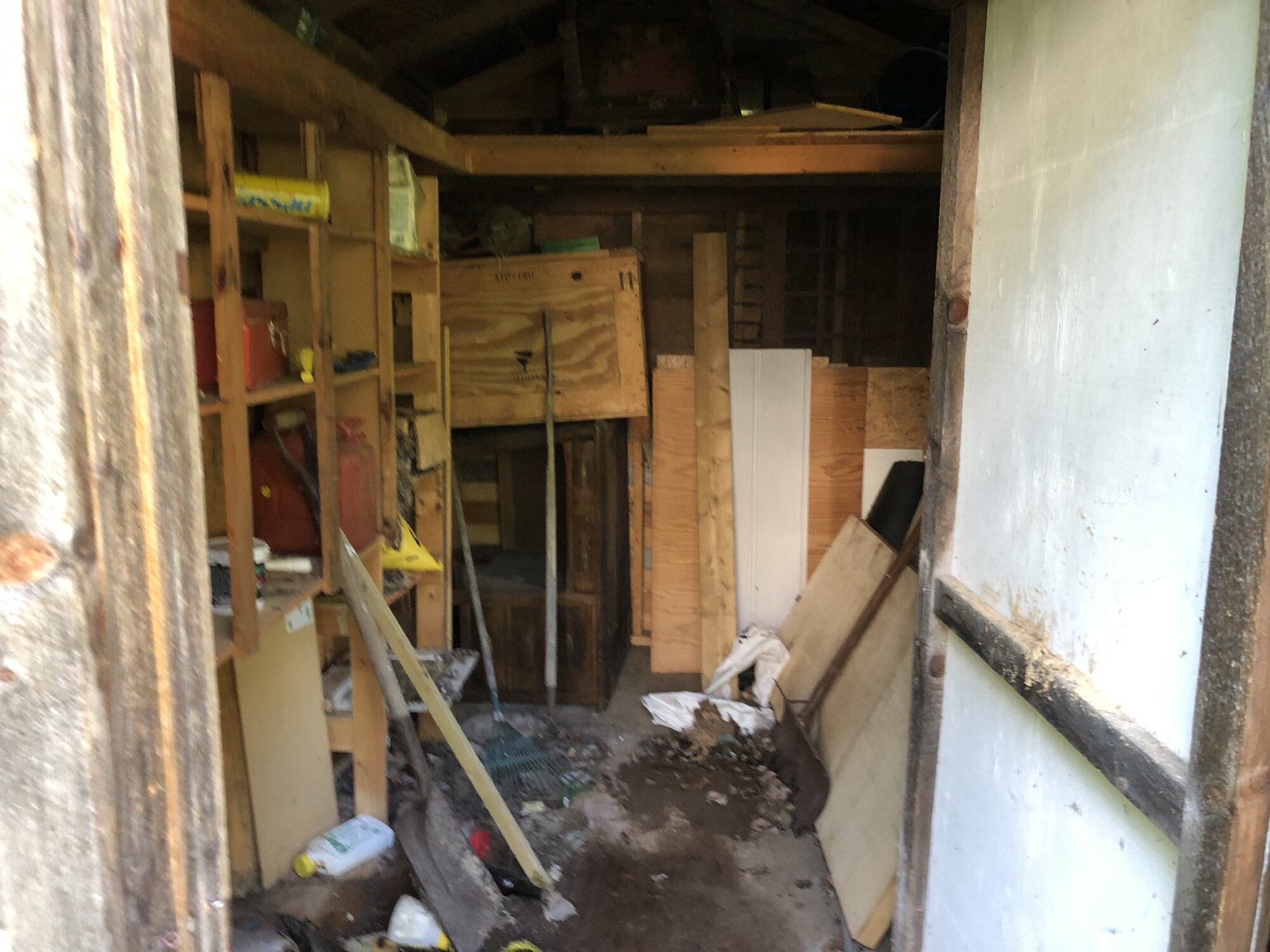 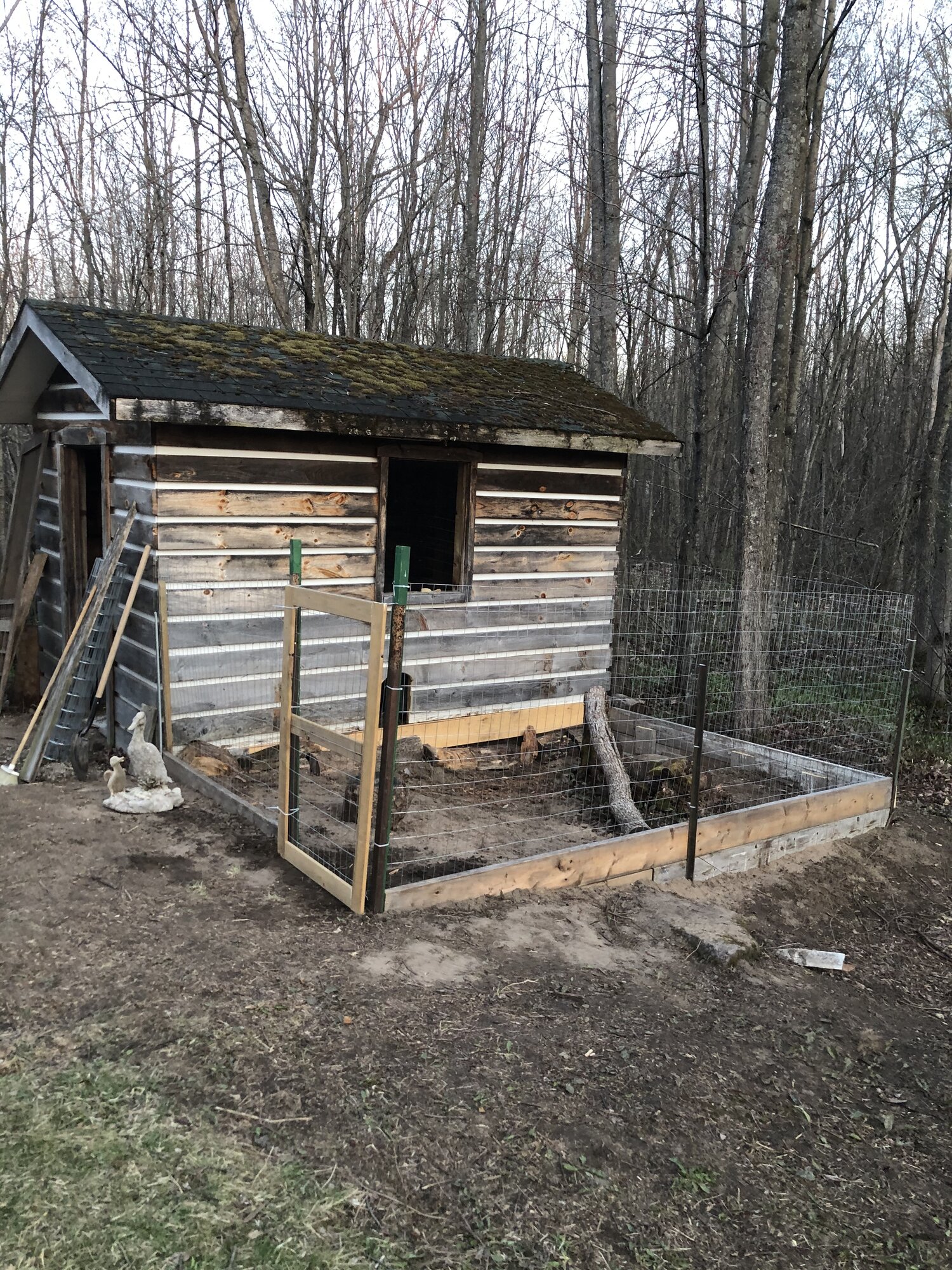 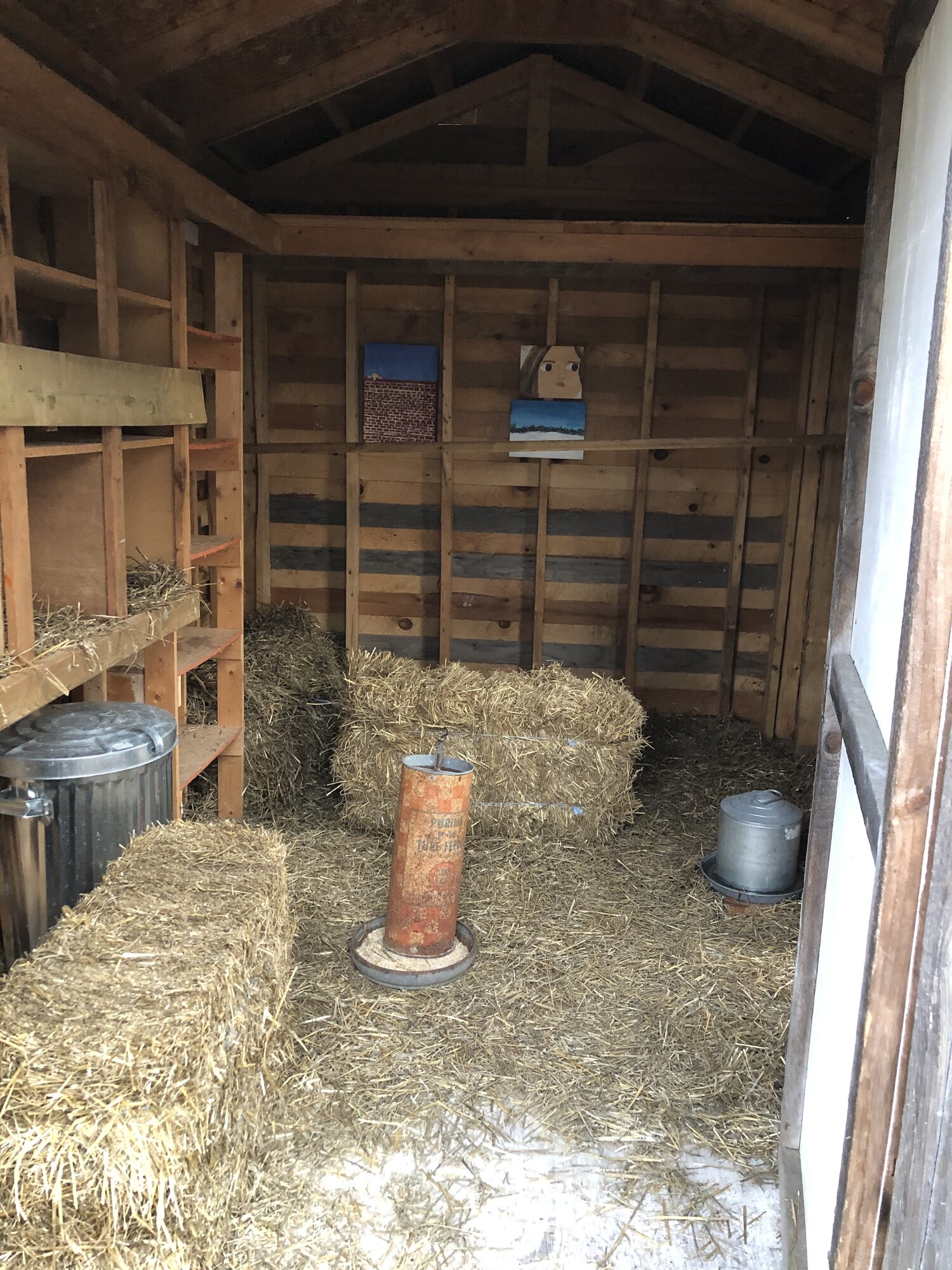 We had lowered the roost and added another bar after this photo was taken. 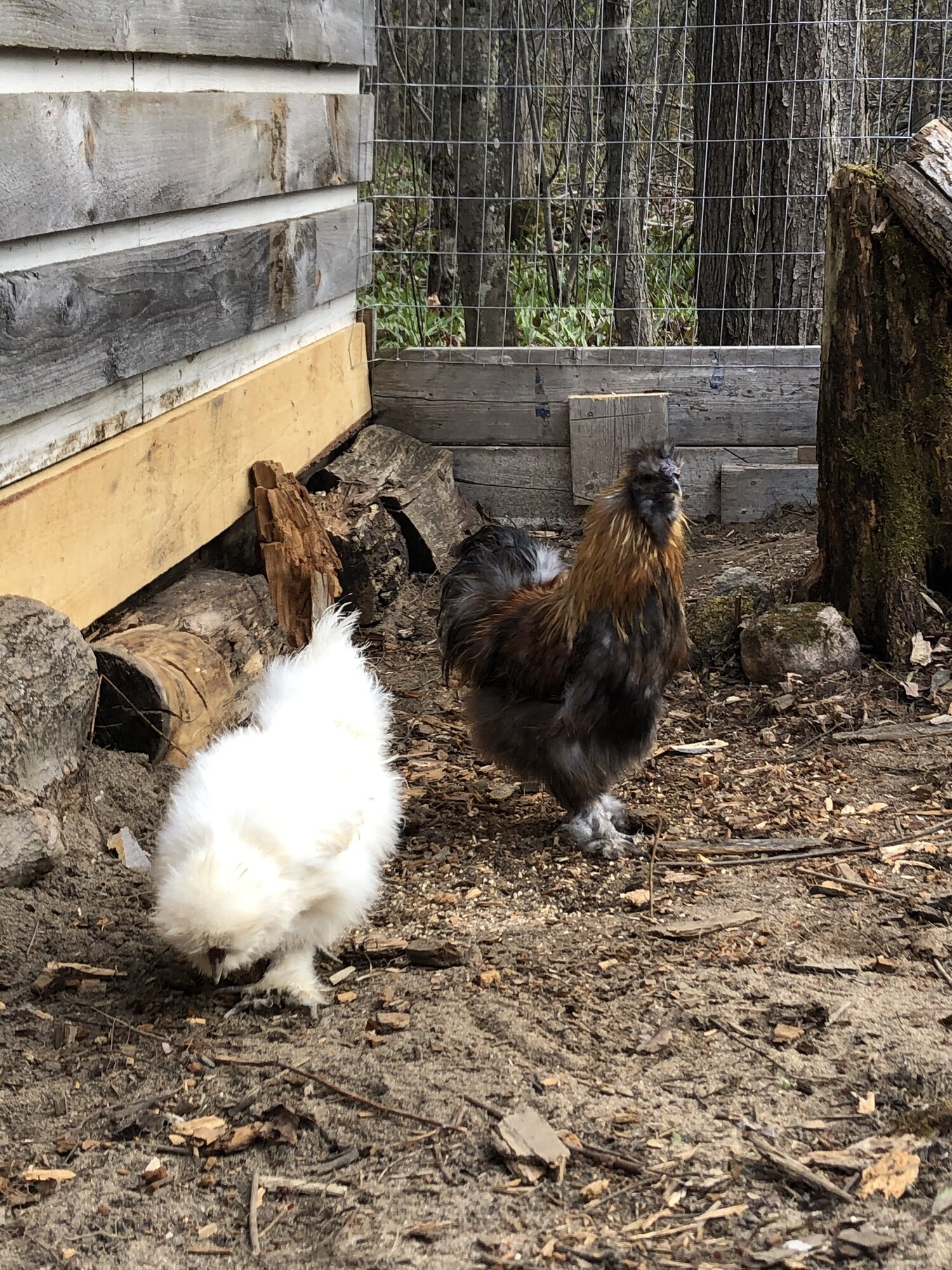 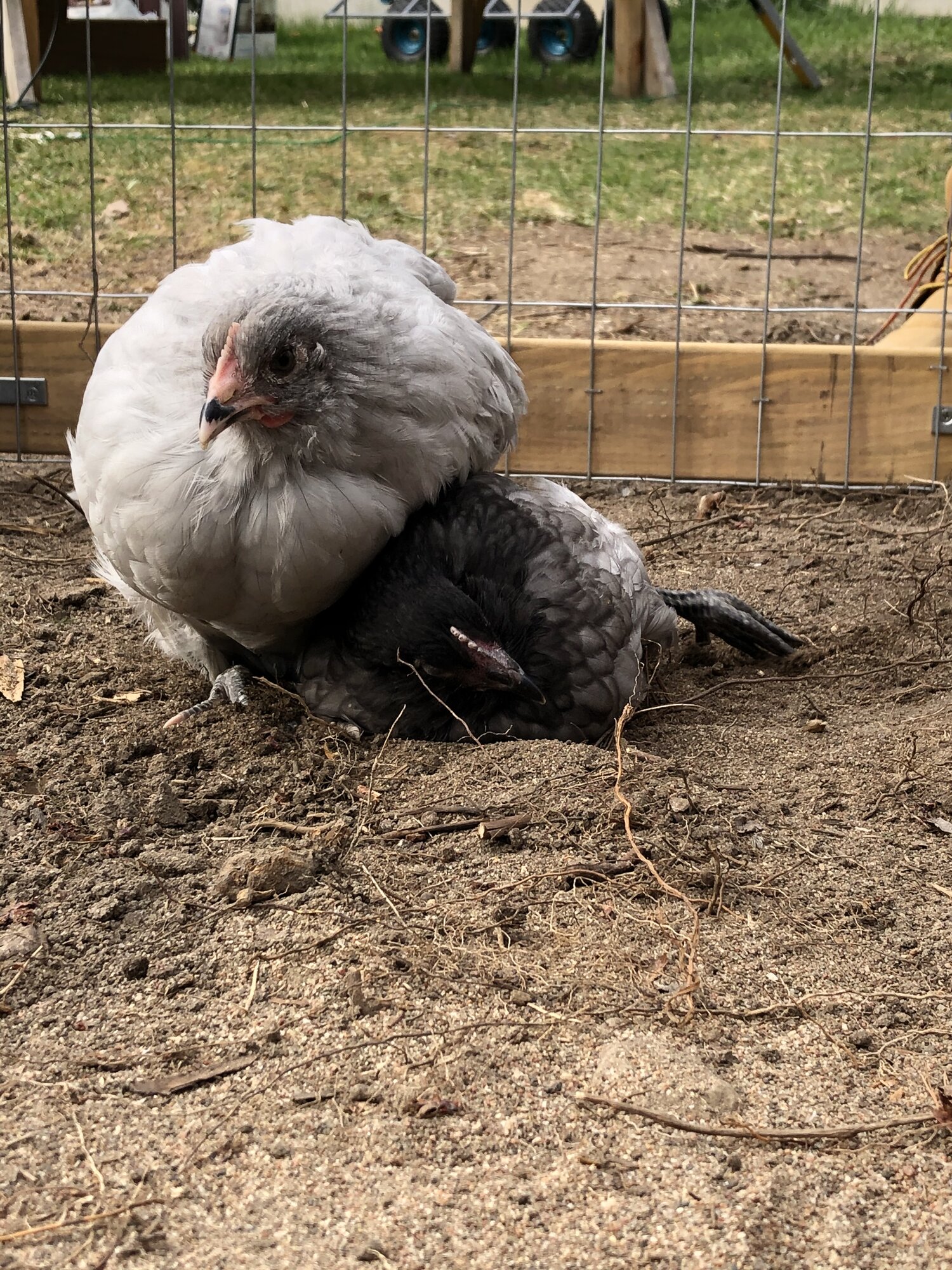 Dori the lav orpington and Lexi the ameracauna mix at 14 weeks old, both enjoying a dust bath. 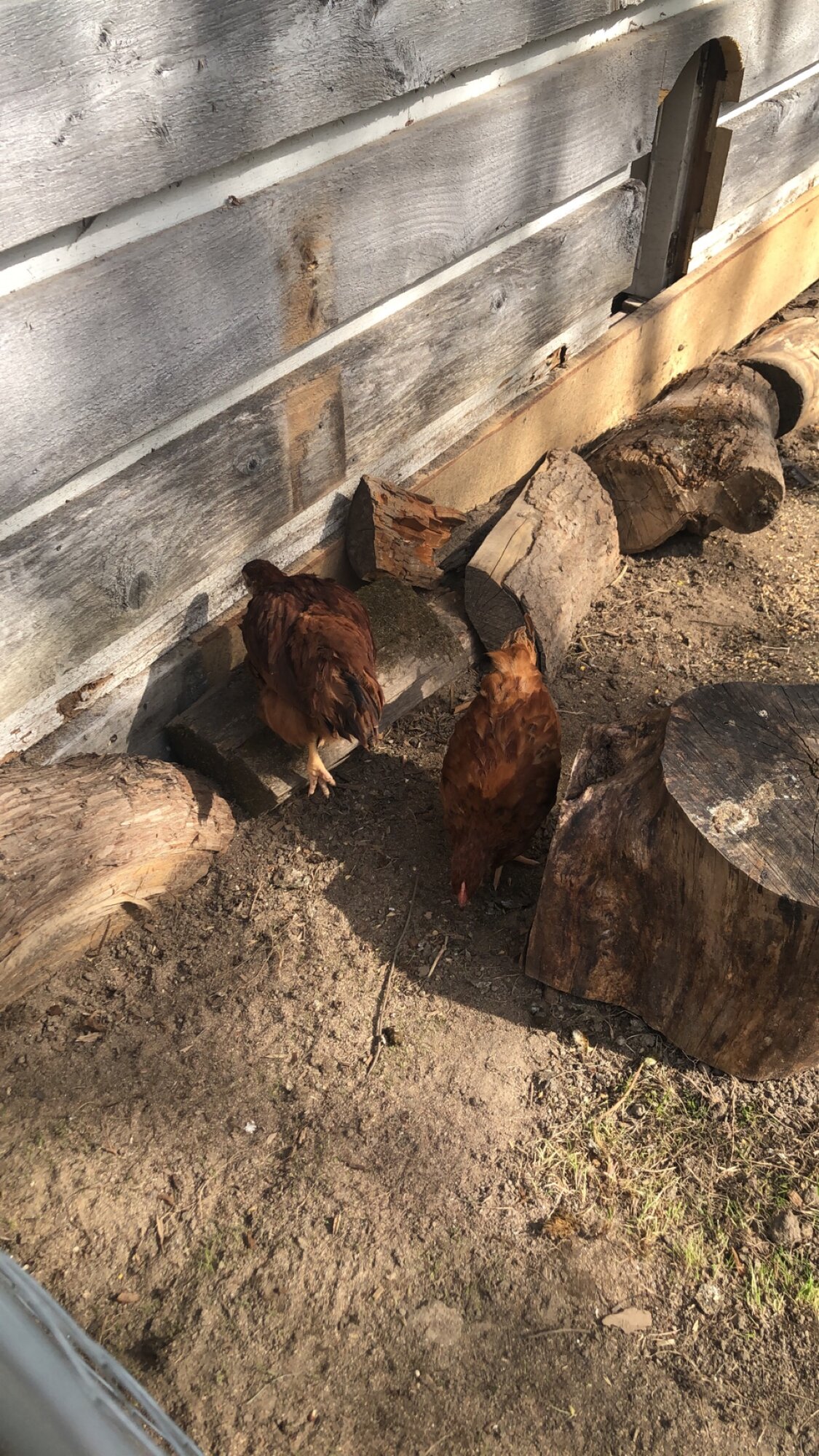 Nugget and Plumsauce the RIR chicks at 11 weeks old.

Two weeks later, we decided to pick up one of Nugget’s brothers (we didn’t know then he was a little cockerel) just to keep her company since she was the odd one out.

Now here we are with our 6 little chickens, enjoying all the fun they have to offer us! They’re growing and exploring and learning more and more everyday and establishing the new pecking order (Rex, BB, the Greys then the Reds)

When I say it we’ve learned a lot from this flock, I mean it. From a nasty upper respiratory infection which spread to all the birds to coccidiosis, to fox attacks and mites and even to the miracle of broody hens and hatching, I’ve searched so many websites and forums to get answers on how to keep my chickens the healthiest I can. If you scroll through my old threads and posts you can just see the extent of what I’ve gone through with these birds!

At the beginning of July, we really started to notice URI symptoms with the flock, including a rather disgusting swollen eye that Lexi had.

Rex the rooster developed a bubble eye shortly after and all the birds were regularly sneezing and head shaking. We treated them with Denagard and they didn’t show any symptoms after that. Lexi’s eye is down back to normal size now!

After 3 weeks of brooding, BB hatched 1/3 eggs on July 1st. I was ecstatic to come out the coop and see a little head poking out of her wing. We decided to name the chick Phoebe. 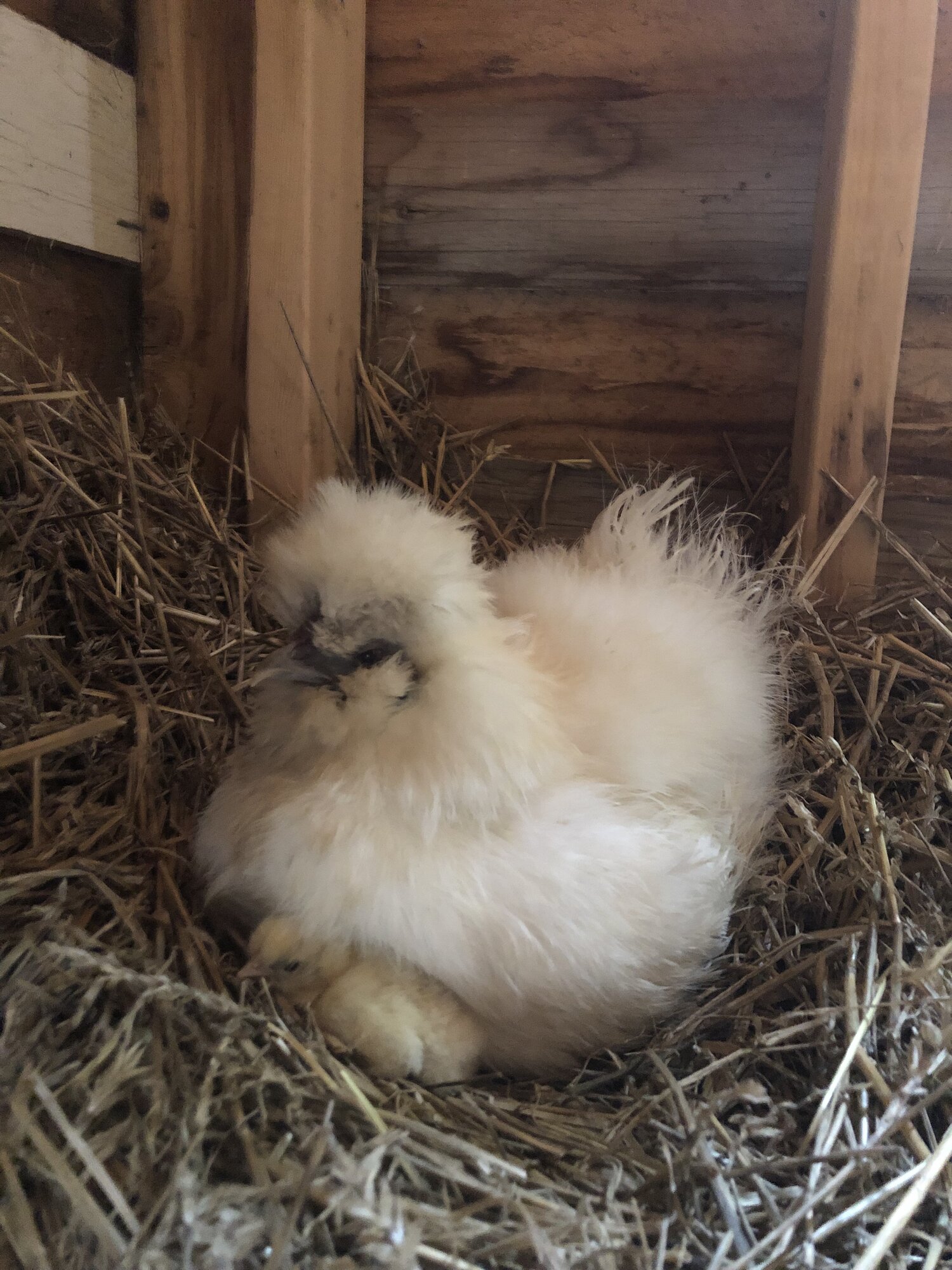 Sweet BB and her little chick Phoebe on hatch day.

BB was an amazing mother to Phoebe, she had him outside only 4 days after hatching! He grew up to have some wonderful markings. Through her chick raising, she seemed to neglect herself. She was amazingly skinny even though we tried to supplement her diet with eggs and other high protein foods.

At the beginning of August things turned for the worst with BB. She developed severe coccidiosis which essentially messed up her digestive system.

She was malnourished, at the vets clocking in at only around 500g. The respiratory infection symptoms came back which made it nearly impossible for her to swallow/breathe because of the amount of mucus in her throat. She was bedridden in a dog crate with Phoebe for 3 weeks to be syringe fed. At one point she was strong enough to be awake and walking/stumbling around outside and pecking at food but that only lasted a few days.

Poor BB ended up passing the evening of August 25 in my mothers arms.

Shortly after BB’s death, our cockerel Plum was taken by a fox.

Just before this point, I was worried about how the flock dynamic would work with 2 roosters as Plum was around the 6 month mark. Even though I had never heard him crow, tidbit or try to mount any of the hens I’d still think of all the possible outcomes

I even saw Rex do a mating dance a couple of times in his direction!

With BB gone, my focus shifted to helping integrate Phoebe into the flock. I’m sure you can assume how happy he was when he was outside, alone, with chickens 10x the size he was! He quickly became my favourite chicken, he loved to be held and around people and not to mention he was so friggin cute!

Phoebe was such an amazing little chick with such interesting patterns I was so excited to be able to watch him grow up.

Of course I wasn’t. September 12th, Rex, Phoebe and Nugget were taken by a fox while I was at work with my dog.

Words can’t describe the feeling when I realized that those were Rex’s feathers strewn across the front yard. Since there was no evidence of Phoebe being taken, I was really hoping he was in hiding. He wasn’t, he was probably the first victim in this attack. This left Lexi and Dori, who had to be confined to the run for the rest of the time we had them. They would be able to free range when we were home.

September 26 2021, a little over 5 months since we first got them, our flock went back to the place where they came from. Our flock went back missing 4 who came from there and 1 who should’ve gone back too. Now, Lexi and Dori will be able to live in a coop and run at the back of the property with some of the “less sturdy” hens who are the personal laying hens for the farm. I am so appreciative that they were able to take them back as the other alternative would’ve been culling, and I don’t want to kill my pets. 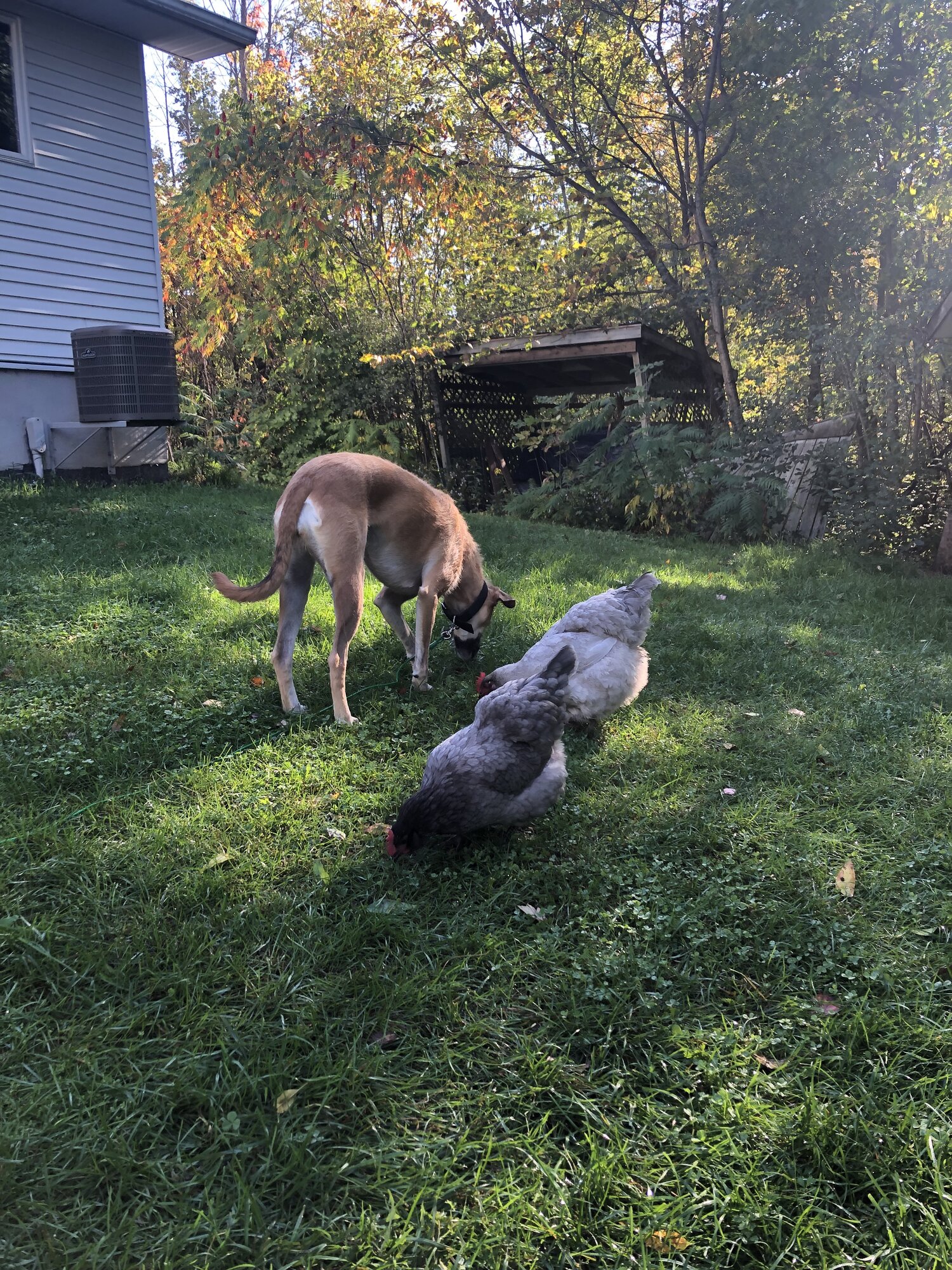 Here are Lexi and Dori with Cricket the dog enjoying some final foraging time together.

A rollercoaster of emotions doesn’t even begin to describe the way my summer of chicken has been. All the laughter, smiles, blood, sweat and tears that the flock has brought me was all for the greater good. I know I wouldn’t have had the same lessons about chickens if the whole experience went smoothly, no matter how much I wish it did. On top of all the learning I did about diseases, breeds, feeding, hatching and so much more, each of the chickens taught me a lesson too.

Rex taught me the loyalty and the protective nature we should have for those we love. He often would attack our legs if we got too close to him. I take this as a token of his respect for his girls and the passion he had towards them. I know in the end he went down with a fight against the fox. He was the best tidbitter too, somehow he always found something out of nothing to give them. 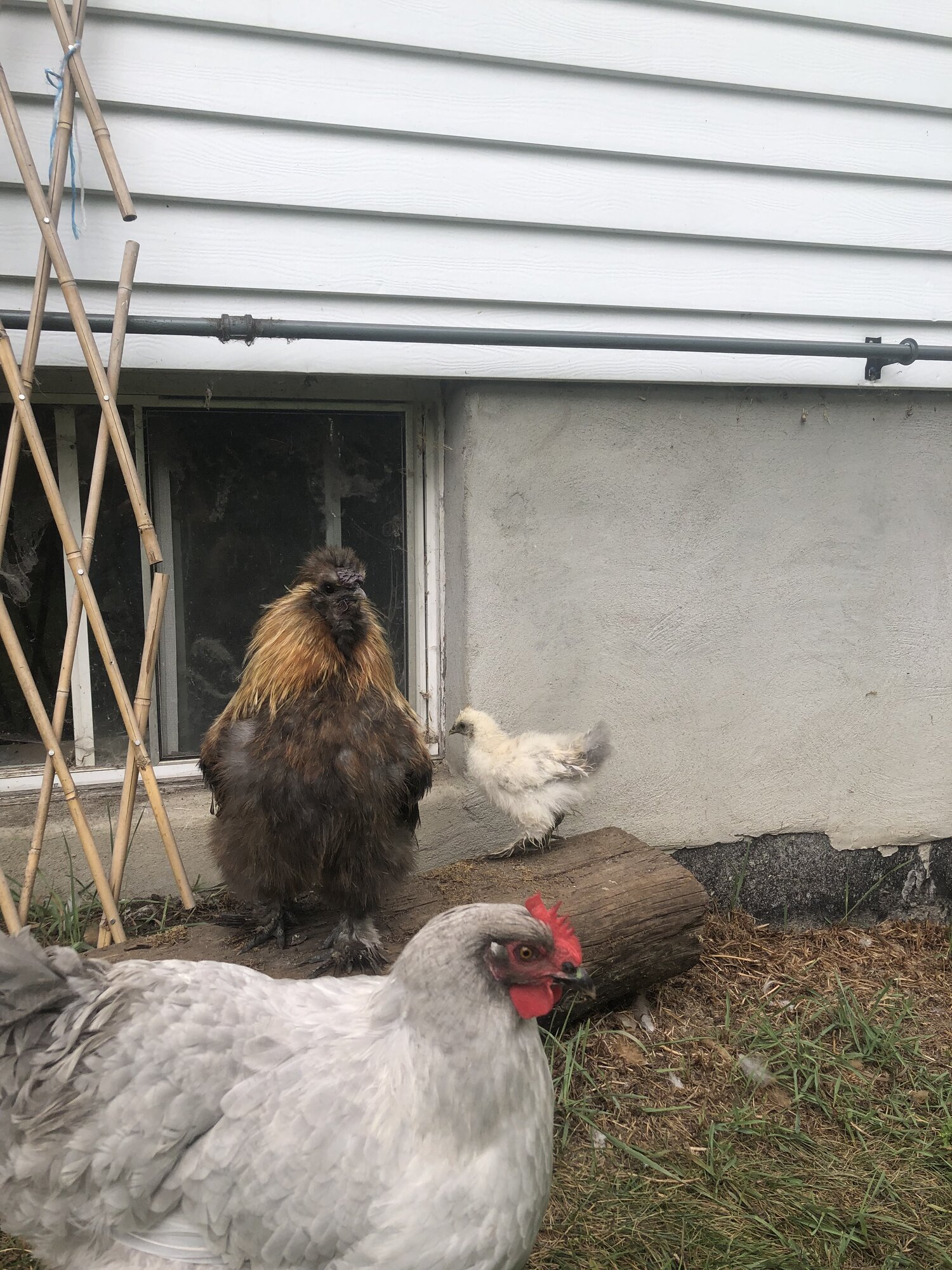 BB taught me about the perseverance of the spirit in sickness and health. I know she wanted to keep going, and she tried so too. She almost was there but in the end she was just too weak. I’m extremely impressed she lasted as long as she did especially for an ornamental breed. I don’t think I’ll ever forget her. 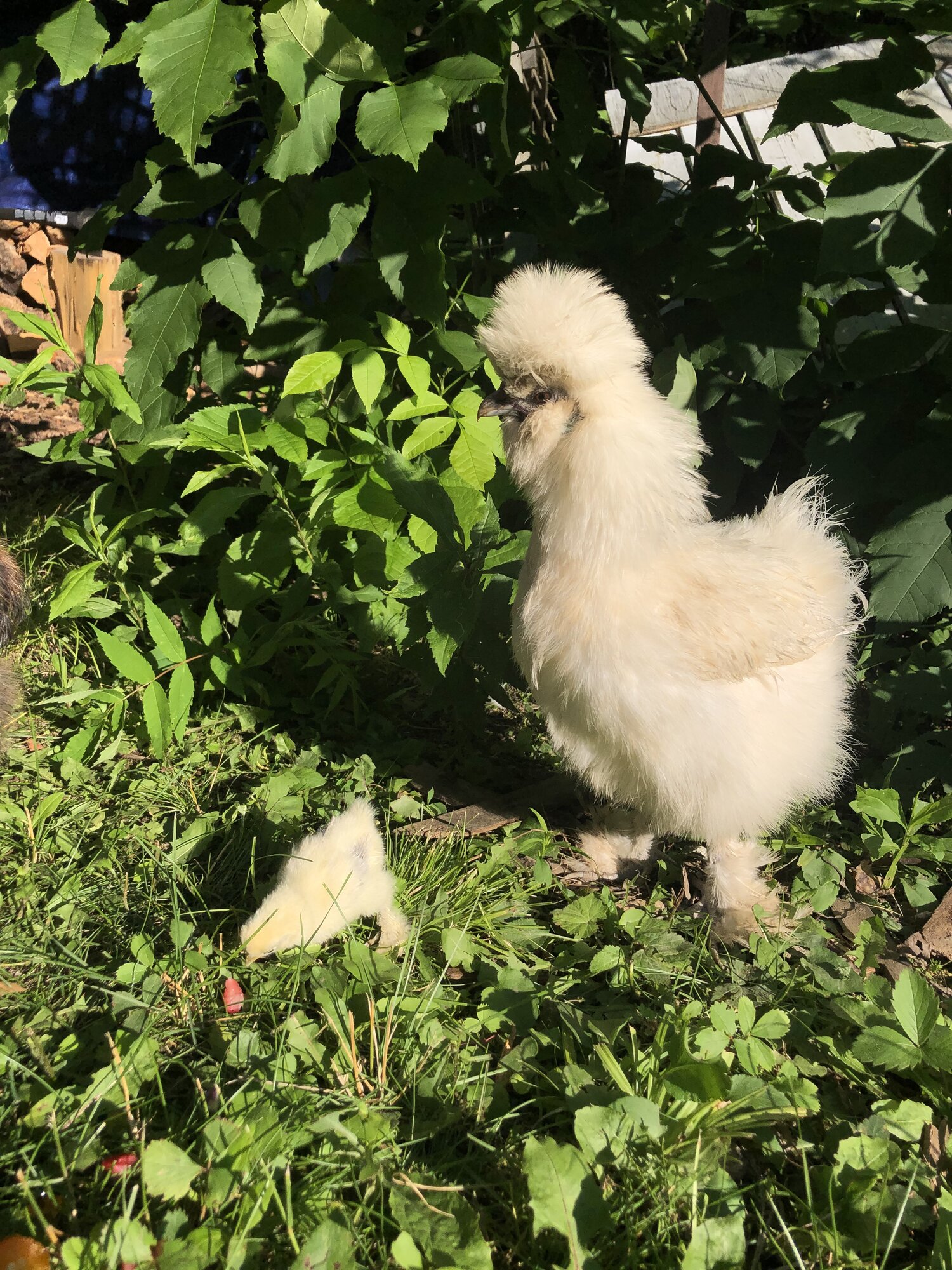 The Greys always knew how to make me laugh. Those two are so funny! For a while there Dori had me doing literal easter egg hunts and Lexi was so food motivated- she’d do anything for a piece of bread. They brought me a lot of laughs and I am so grateful they did.

The Reds taught me about how trust has to be earned, not given. It took me a little more time to tame them than the Greys. They were such delightful birds to have around, especially since Plum was turning into a nice little cockerel. 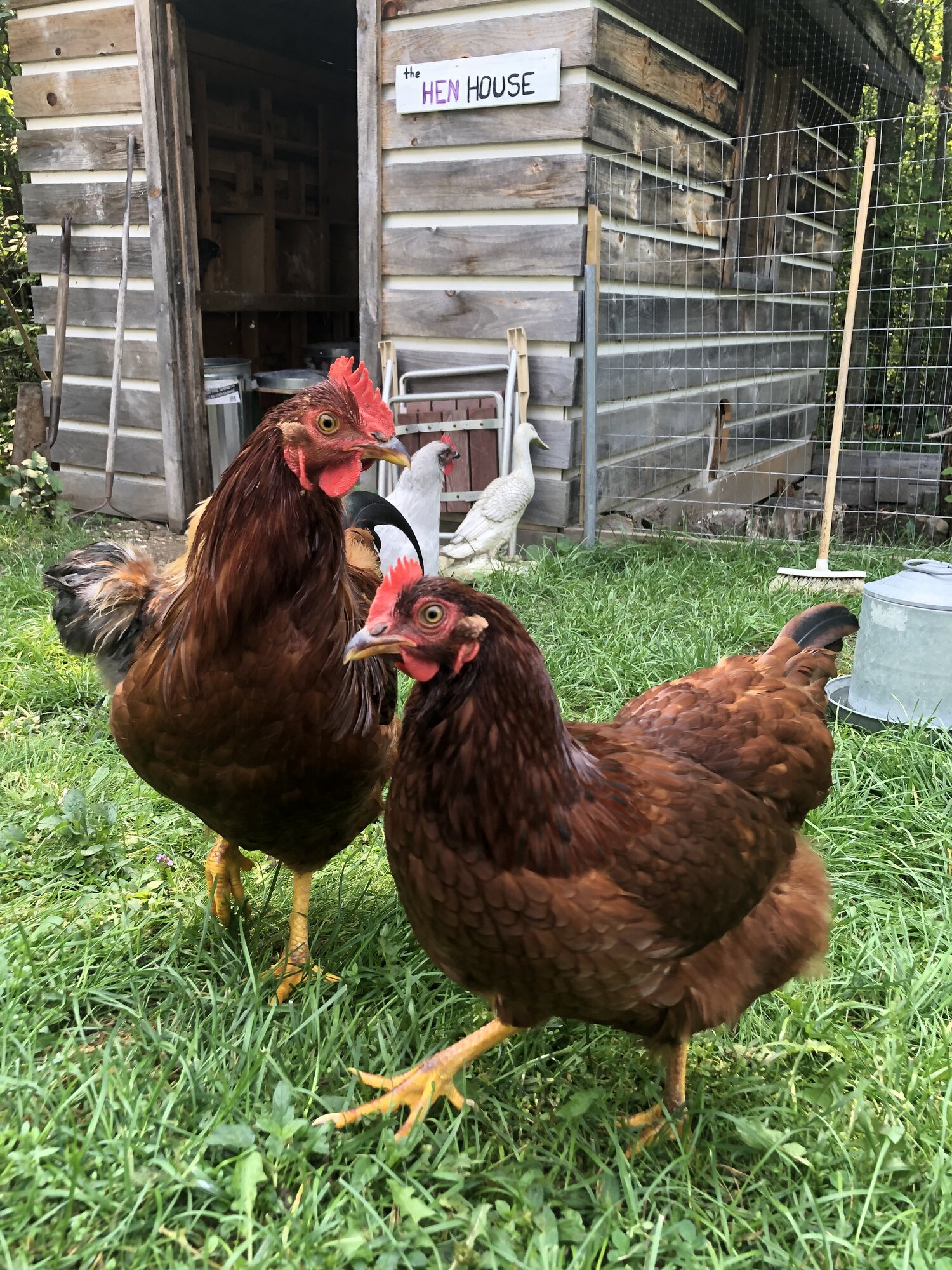 And finally little Phoebe taught me about the miracle of life. It’s still hard for my mind to wrap around the fact that a chick can just pop right out of an egg like that. I am eternally grateful for the learning experiences that Phoebe and BB gave me- I mean how many people can say they helped their chicken hatch an egg? I am so sorry our time was cut short Phoebe. I really wish I was able to watch you grow up. 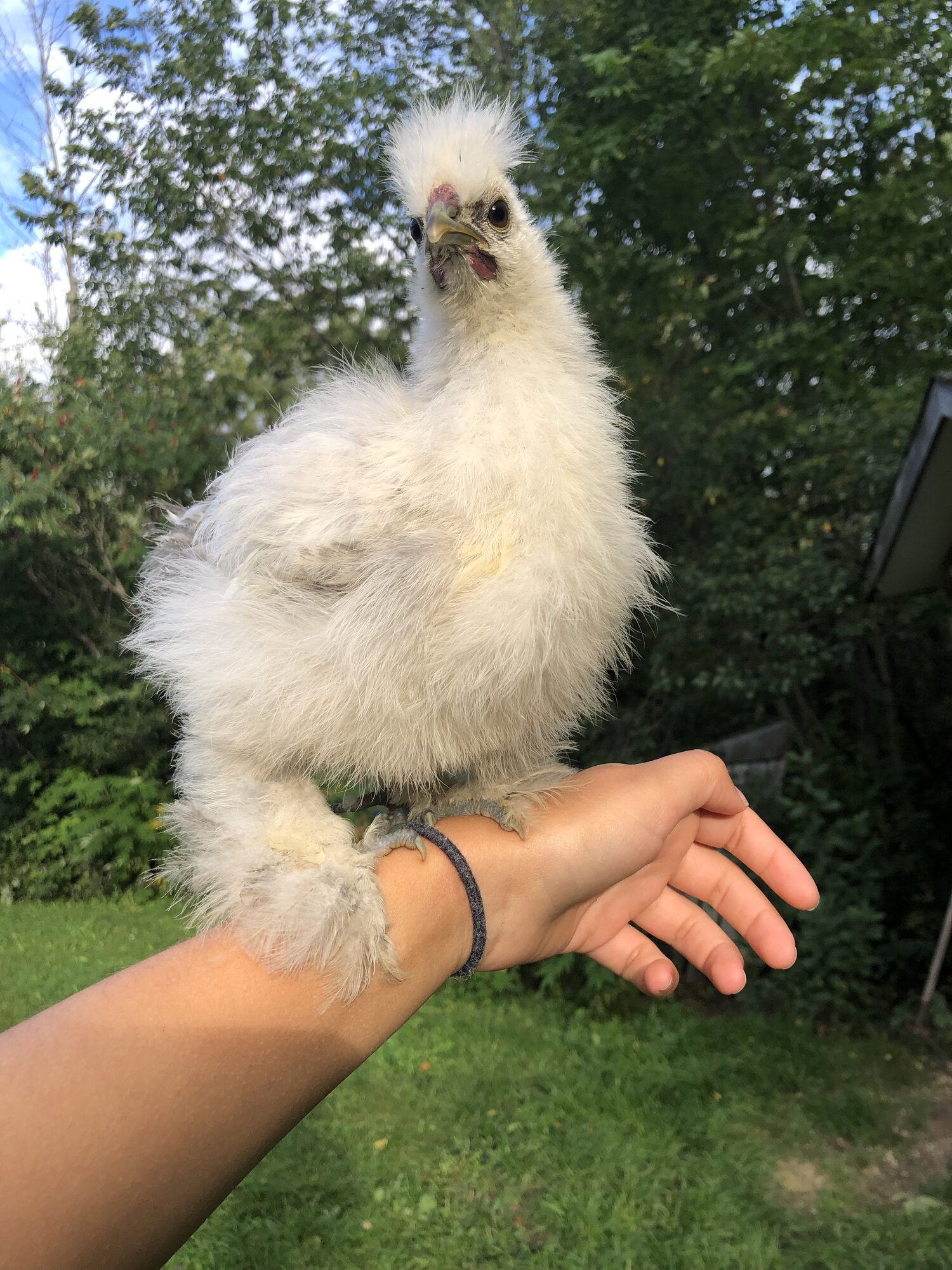 It’s amazing what a flock of 7 chickens can do to a person. Chickens are an experience I think everyone should have. I am so grateful I had the flock I did, I loved them all so dearly and I hope they knew that.

My dads friends have been very adamant about next summers chickens, offering to hatch some in January and reserving them just for us so we can have them start laying in June/July. I would get them again in a heartbeat but this is a family decision and we will need to have a good talk about it soon.

I joined BYC on May 25 but I have been looking at various threads on the site during the month before. It’s amazing how BYC manages to create such an amazing chicken environment and I hope everyone who comes here feels as welcome as I do. I am so grateful for all the help I’ve received from various members, I know I’ve asked some pretty redundant things before

Im sure some of you have seen or will see some of my posts on the site, replying to threads about trying to help people, dog related subjects, POW and calendar contests as well as adding my opinions and stories to pieces.

Once again, a huge thank you to everyone who has helped me over the past 5 months.

Until next year BYC,
Addison

Cool story! Thanks for sharing

This was beautiful. I felt attached to your chickens just by reading about them. You gave your chickens an amazing life. This makes me so grateful for my girls. Thank you for sharing

Well written! Thank you for sharing. An interesting read. A+!

7 week old silkie is now in the “ugly” phase

My hen’s got balls!