They won't roost in the coop :(

Hey there! I have a bit of an issue I would love some advise on.

I just got 4 pullets about a week ago. The first night I had them locked in the coop, then opened it up to their run the next day. Well, ever since - they refuse to roost in the coop at night. They just roost on a bar out in their run. I'm worried that when it comes time for them to lay, they won't go up into the coop to find the nesting boxes :/ They know how to use the ramp and go in - as sometimes I will sprinkle food up the rap and inside the coop to entice them in and it works.

Should I just remove the roost outside and see if they go in? Or is that bad, since incase they don't go in their would be on the ground all night?

I will post an image of my coop below. 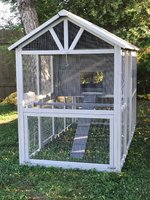 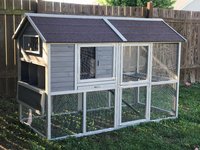 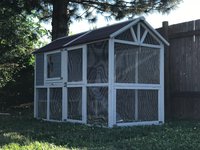 Pictures will help a lot.
Chickens prefer to roost as high up as possible, so they might just like it better outside. Is your coop small, short, and dark? That's a problem for them.
Mary

If you make the entire structure predator proof, it will work as a coop, and leave the door open to the 'coop' section. That solves the problem. These tiny 'dog house' coop are often not very chicken friendly, IMO.
Mary

I have 8 and they don't roost at night. Snuggle next to each other! I gave up trying to show them how to roost. Switched out size of roost, changed to branches, nothing worked. They are happy and healthy with good egg production.

DMH said:
I have 8 and they don't roost at night. Snuggle next to each other! I gave up trying to show them how to roost. Switched out size of roost, changed to branches, nothing worked. They are happy and healthy with good egg production.
Click to expand...

Awesome! Do they tend to go inside to lay at least?

I have 2 that roost on the ground inside (tried relocating them to a roost at night, that messed up the 'roosting positions' and noone was happy, so they are back to roosting on the ground.

But..I introduced 3 new girls who started roosting on the feeder in the outside bit of the coop - I hung netting around it so they couldn't use it and found they then went in and roosted with the rest of the birds)

Mine were the same way for a good while. I started physically going and moving them in there at dark. They would fuss if I put them in before dark. Now they go in there all the time. Even now that I let them free range for a few hours. It only took a week or so of doing that.

They probably don't find the coop section very attractive - likely too small for 4 of them, the roosts are probably very low inside the enclosed unit, the ventilation is much better in the run section (which is a factor if it's starting to get hot at your location). For 4 pullets I would turn the entire structure into a coop, then add a roomy run or let them free range outside, whatever works for you.
You must log in or register to reply here.
Share:
Reddit Pinterest Tumblr WhatsApp Email Link