Remedy is a Paint horse mare that I found online in very early August.
She was living in Burns Oregon in a horrible situation of neglect. Her prior owner had over 40 horses on 30 acres of nothing but sagebrush and wasn't feeding them hay or anything.
I had been looking around online for my dream horse for a long time, 10 years ago I owned 4 of my own horses but in 1999 a huge personal life change brought me to the point of having to sell them (they were being boarded and I couldn't continue to pay the board for the 4 while I dealt with the life change).
Ever since then I have been depressed. I have doubled my weight since 1999. It just hasn't been a good situation. I've known all along that I needed horses back in my life but up until now I would have run into the boarding problem again and having three kids there was no way I could afford to board a horse.
Now we have our farm. So I started looking around for a horse. I knew I wanted a mare, I've always been partial to mares. I knew I wanted a chestnut, it's always been my favorite color. I like solid chestnuts with white stars or blazes and socks. I like Quarter Horses and Thoroughbreds.
Several months ago I found a chestnut QH mare for sale on a horse site. I contacted the owner about the horse and the horse had already been sold but come to find out the owner lived 1/2 mile down the road from me! We have become fast friends and I have visited her often in the last several months to play with her horses, groom them, etc.
She knew I was looking online at sale ads and sent me a list of QH sites to look at.
I browsed two and picked a third randomly from the list and was brought to a site called Last Chance Ranch which is a BLM Mustang Rescue type site but they had a for sale section so I clicked and browsed, all of the horses were owned by the website owners neighbor and this woman has been trying to help place horses from her neighbors place for the last 3 years, she has placed over 25 horses from there.
While going down the list I clicked on a description for pictures of a chestnut and white pinto mare and I fell instantly in love with her. Her hooves were horribly over-grown, her coat a mess, her belly bloated with worms but I fell for her and that was it.
The huge problem: She was in Oregon and I'm in Rhode Island!

So, with everyone thinking I'm nuts I worked my butt off for a month trying to find a transporter to pick her up and move her across the country for less than $6k because when I was quoted that price I nearly had a heart attack.
This friend who gave me the link down the road had a new farrier come out to trim her horses and got to telling the farrier about my situation, trying to find transport help. Turns out the farrier also runs the largest horses rescue in RI, she was owed a favor from another woman who is the president of The American Horse Defense Fund, who in turn was owed a favor by a horse hauler, and within a two day time span I had a transport lined up from OR to RI for $1600.00!
I then had people spreading the word all over the place and before I know it people were making donations to help with the cost of the vet and the transport.
We had her complately vetted and hooves trimmed and she was picked up and put on the trailer on September 8th.
As you can see, almost a month later and she's still on the trailer! Well they have stopped for about a week in Arizona and a week in Kentuckey so he's been moving her nice and slow which is good for her feet and everything.
She has gained more than 40 pounds since she got on the trailer in OR! She was so thin when she got on because all of the "grazing" had already died in OR and the owner hadn't been feeding anything!!!!
So, she is due here this Friday!
I'm so nervous and excited I could POP.
Once she gets here she's going to be checked for pregnancy since she was turned out for the last year with a black and white pinto stallion. The hauler thinks she's pregnant, so lets hope the foal is okay and they both bounce back from the lack of nutrition.
I've named her Jenna's Remedy because she's going to help my depression immensely!

Right before she got on the trailer.. 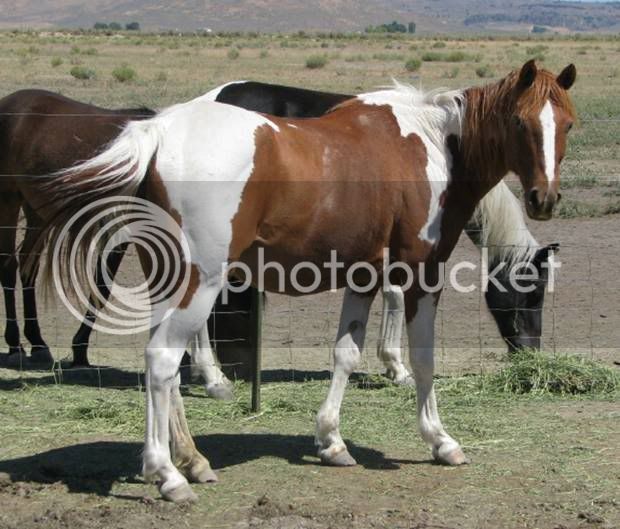 Again before she left, ribby :-( 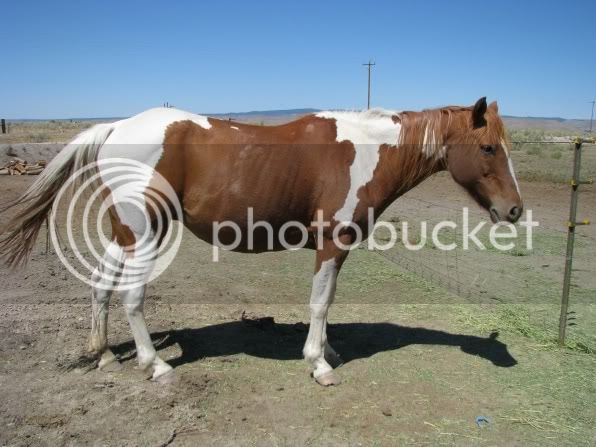 The first picture I saw of her: 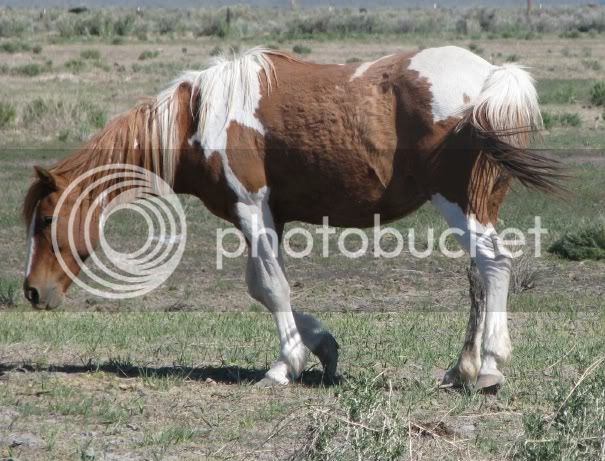 and another, look at the hooves: 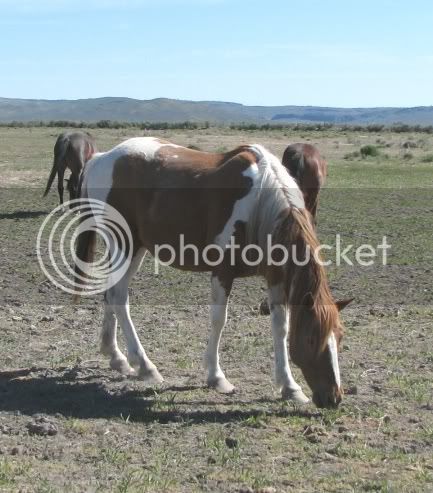 *Update*
Talked to Tom, my hauler and they are still in KY. She is now due to arrive either Monday or Tuesday! I'm dying with excitment now! Everything is ready and I want her home!!!!
He said she is doing great and is steadily putting on weight

I am so happy for you and make sure you post some pictures...after you get over the giggyness of Remedy finally being home.

I'm so thrilled for you! When I was a kid I had horses (or access to horses or made ample use of the neighbors' horses with permission and sometimes without). Life and things being what they are I went without for years before becoming a mounted cop for a while before they dissolved our unit for idiotic political reasons. More years with a big hole in my life before I decided at 40 that I might die before "someday" got here if I didn't do something about it..... I rescued a starved yearling QH (followed by a starved/rescued aged OTTB from online rescue to keep us company). Nearly 8 years later and my life (and theirs I hope) is complete..... I should have skipped my excuses and done it years ago. Life is so much better when you can put your chin on the fence and know that what you did for them was right for both of you no matter the amount of hard work and expense (and that your hands smell like "horse" every day). I know you will be as good for Remedy as she is for you and I can't wait to see pics of her when she arrives at her forever home. Bless you for saving her and going to the effort to get her cross-country to her home!

Please post pics when you get her, I will be waiting to see. I am not a "horse person" myself, no Cowgirl Up stuff for me! But I love all kinds of animals, and horses too. I donate monthly to a local Equine Rescue, just to help with the cost of feed, and every now and then for a specific rescue. Funny, I stick to myself, and have never had a horse, but I will join the cause for horses?? I hope you two enjoy many beautiful times together, it was meant to be - Thank you for being there for her!
Tina/Tfpets

Congrats! She will love you too. I am glad those hooves were taken care of and they are travelling slow with her.

She will put on weight with all the TLC you will give her. She is a beautiful girl.

How wonderful how things worked out! She is a beautiful mare!

Congrats on your new friend!

What a beautiful mare. I am sooo happy for you! And I love the name!

She has a really nice face. Reminds me of a mare I used to have. She was my first and best horse.

Getting nervous and excited to meet her, read the update above!

Ginger, the horse that taught me a lot <3

Horse been lame for 2 months
2

Just got my first cow!