Thoughts on Bedding/Litter -- Why I Chose Straw Today

After a visit from Elsa and even more delays on the Chicken Palace, I noticed the first faint indication of odor in my run and in the coop where I have the Ideal Dozen. As every Deep Litter/Deep Bedding fan knows, the solution to odor in the run is more dry organic material. Additionally, I had cleaned the Little Monitor Coop a couple weeks ago and deliberately shorted them on shavings to attempt to convince a hen to give up making her nest and laying her eggs on the floor so I needed more bedding in there too.

Sunday I raked up 3 gorilla carts of mixed pine straw and live oak leaves and have the expectation of getting another 1-2 before I exhaust all the easily-accessible stuff on the property -- which will probably occur before the next needle-fall. I mowed today and will probably pick up a few bushels of grass clippings after dinner or tomorrow morning with the lawn sweeper.

I don't like to use either the lawn debris or the pine straw as the primary material inside the coop because they're more likely to be damp. Additionally, I needed more dry organic stuff than I have to hand on the property at the moment. So, I still have half a bag of large-flake shavings, but since I have to put this run back to grass I'm trying to limit how much wood I put onto the soil. For the same reason, I'm not using any of the full load of chipped tree that's sitting next to my orchard.

Because while it's not as absorbent as shavings in the coop and does have the problem of packing and matting when used alone and in excess, it does do an excellent job of providing chickens with fluffy, comfy stuff to sit in -- great for nests and good for my floor-sleeping 7.5-week-olds who don't perch yet. 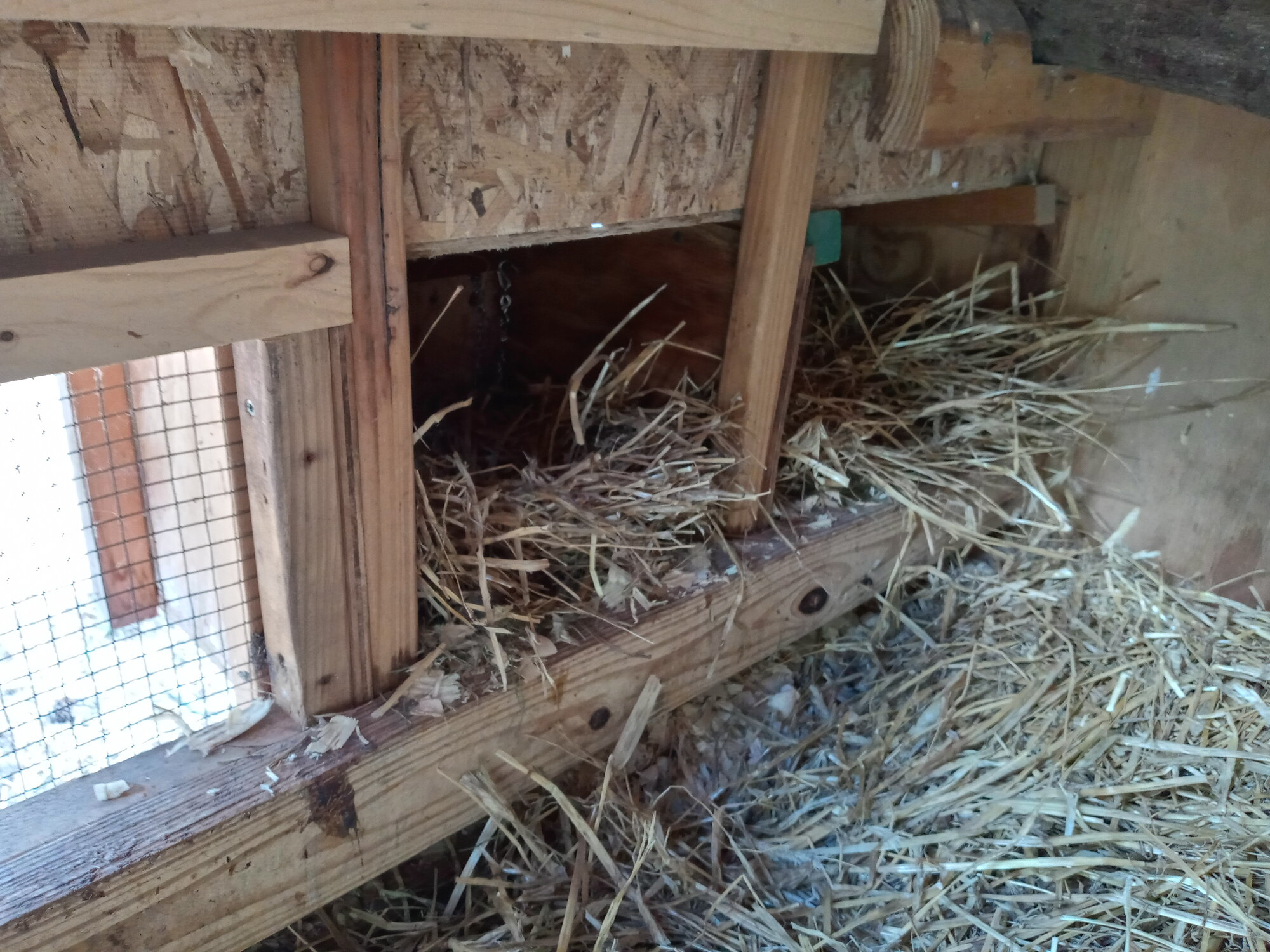 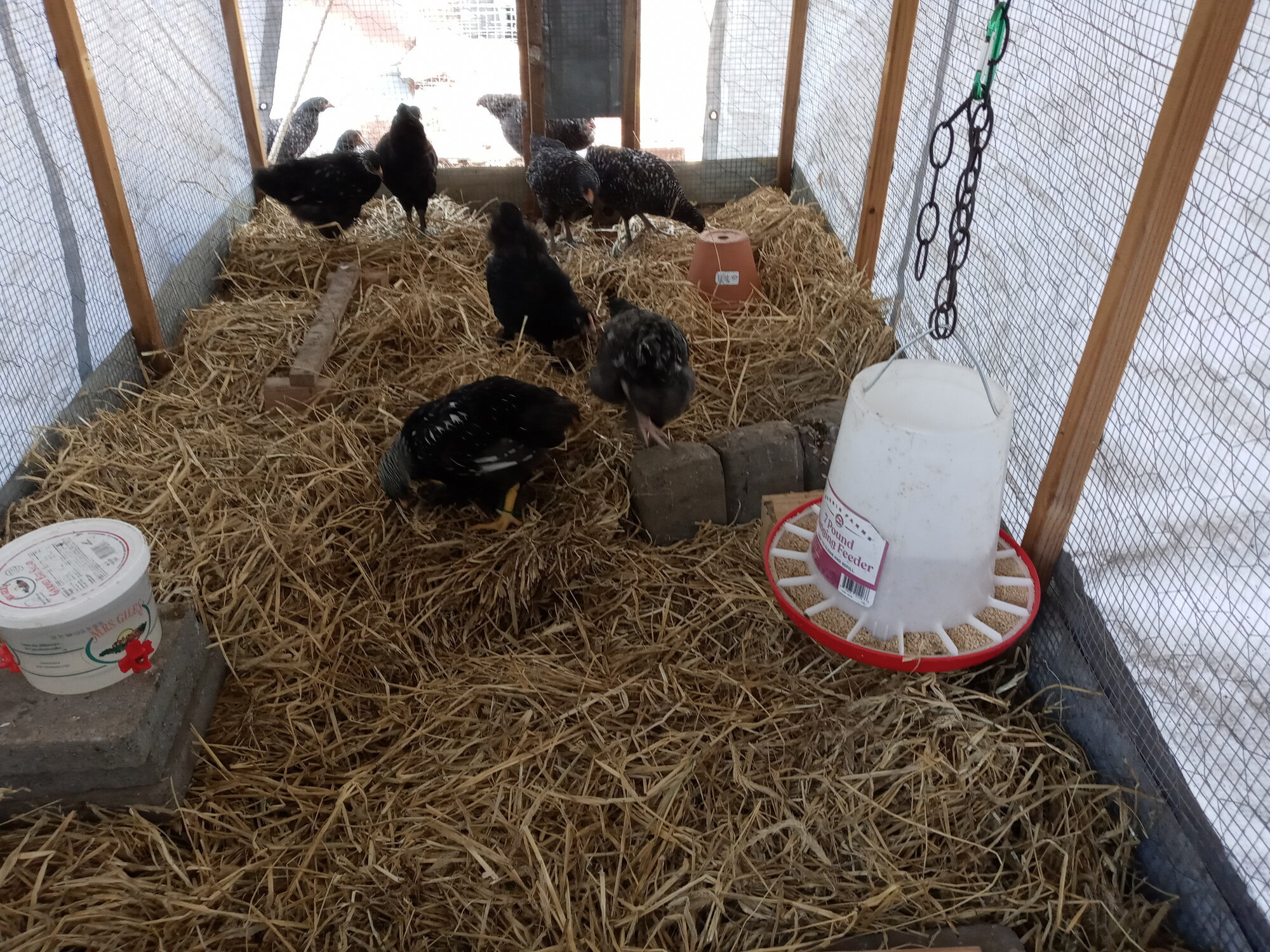 I also used some as part of the mix in the Little Monitor Coop on the principle that mixed materials are better than any one material alone (I'll top it with shavings the next time it needs more bedding). The straw keeps the shavings fluffy and well-aerated, the shavings keep the straw from packing and matting.

I didn't detect any odor from the Splits' playpen-coop, but put some in there on general principles since they'd been bedded with fine-flake shavings at the same time I'd done the brooder/coop and that was where I'd had odor. That took up the first bale. 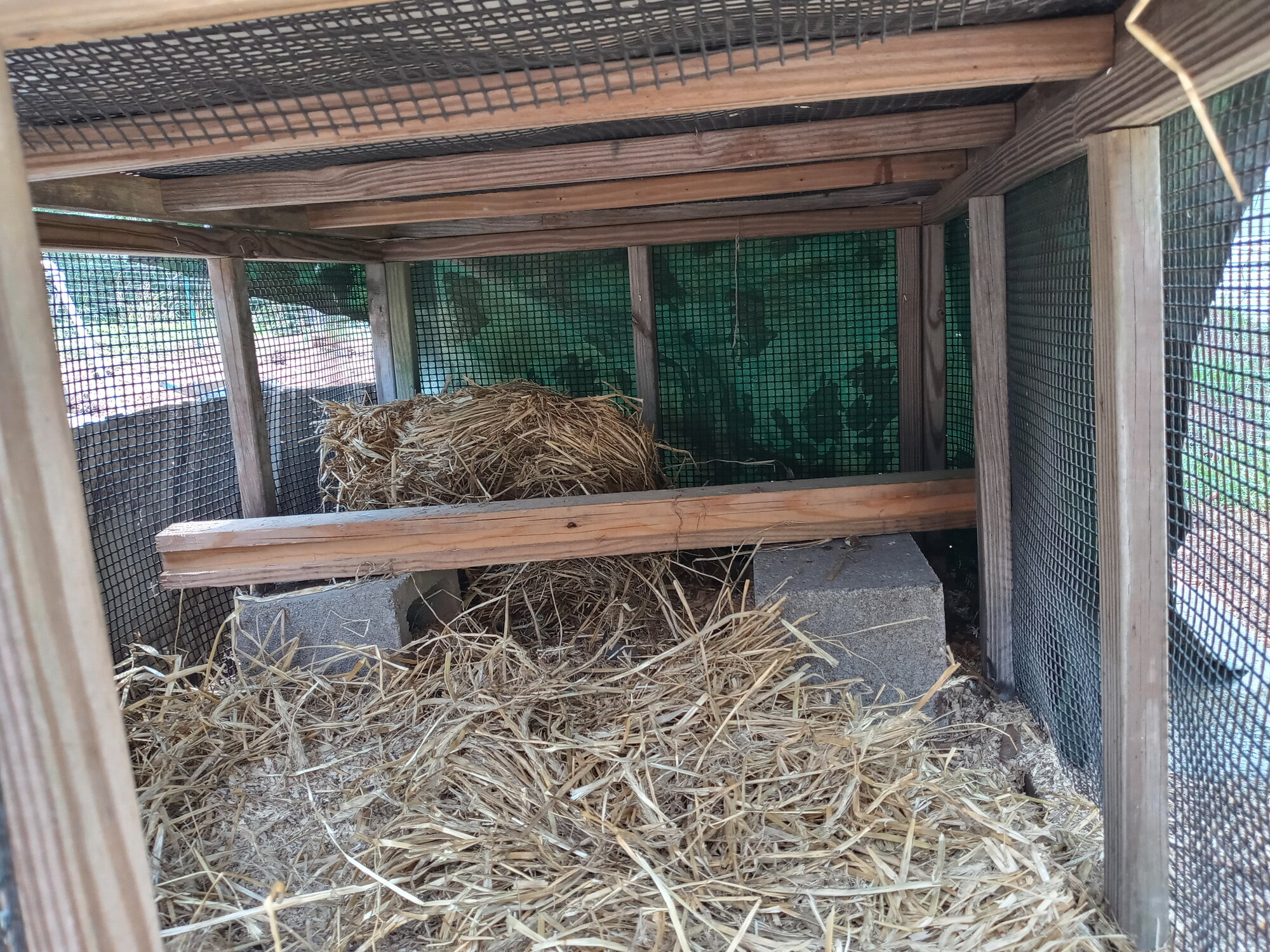 Then I scattered another bale around the run on all the parts that looked more like dirt than pine straw. 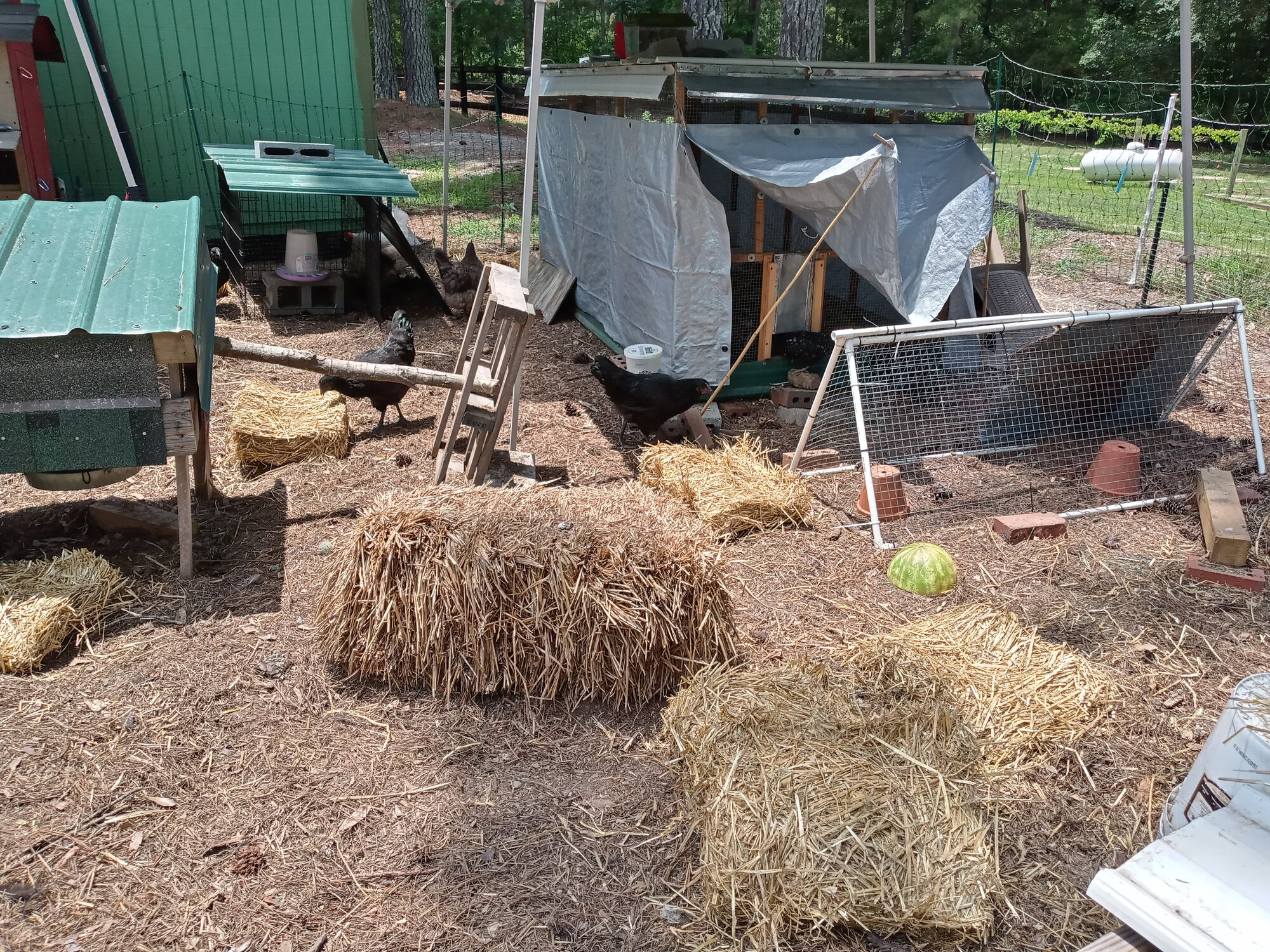 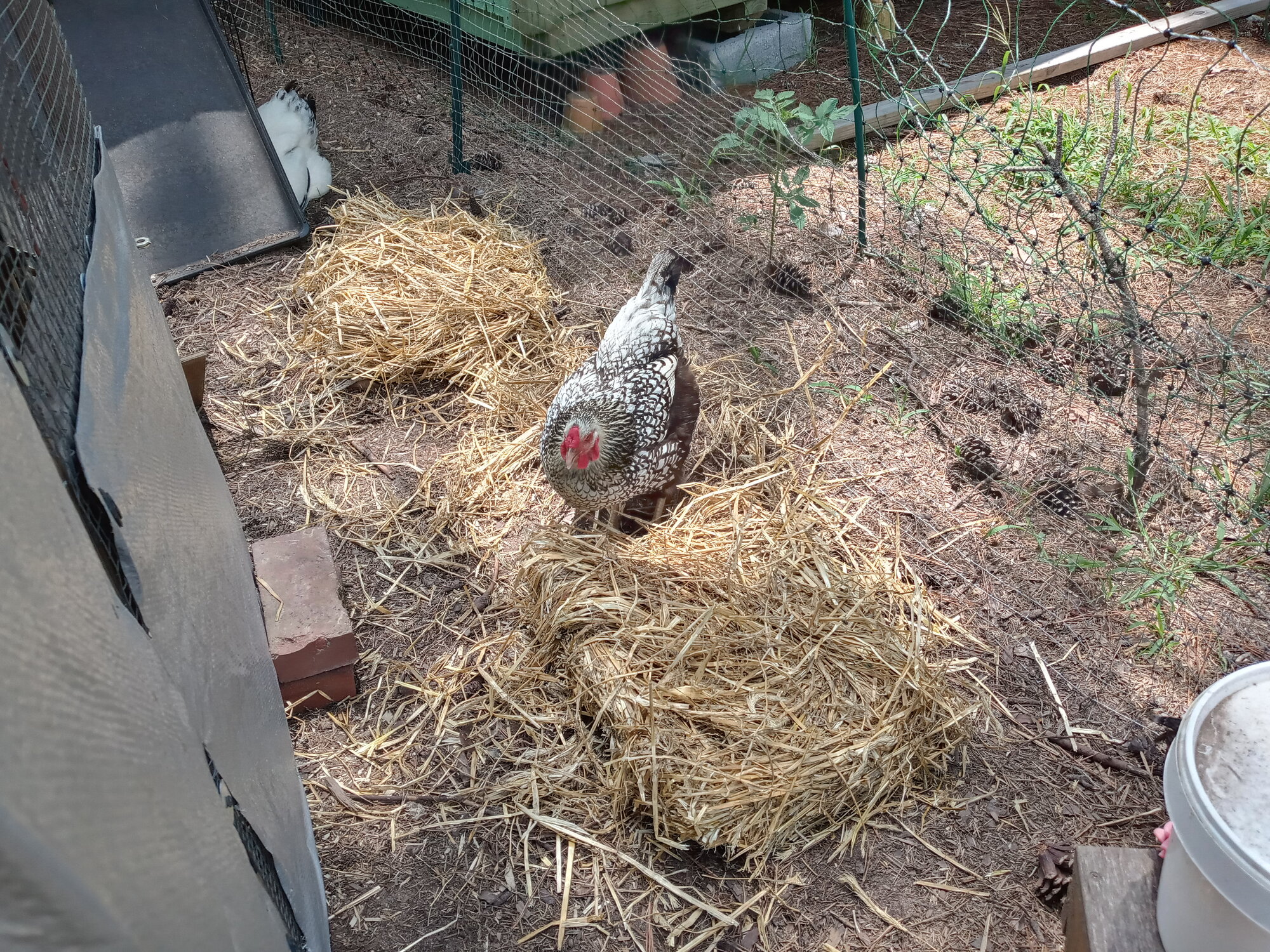 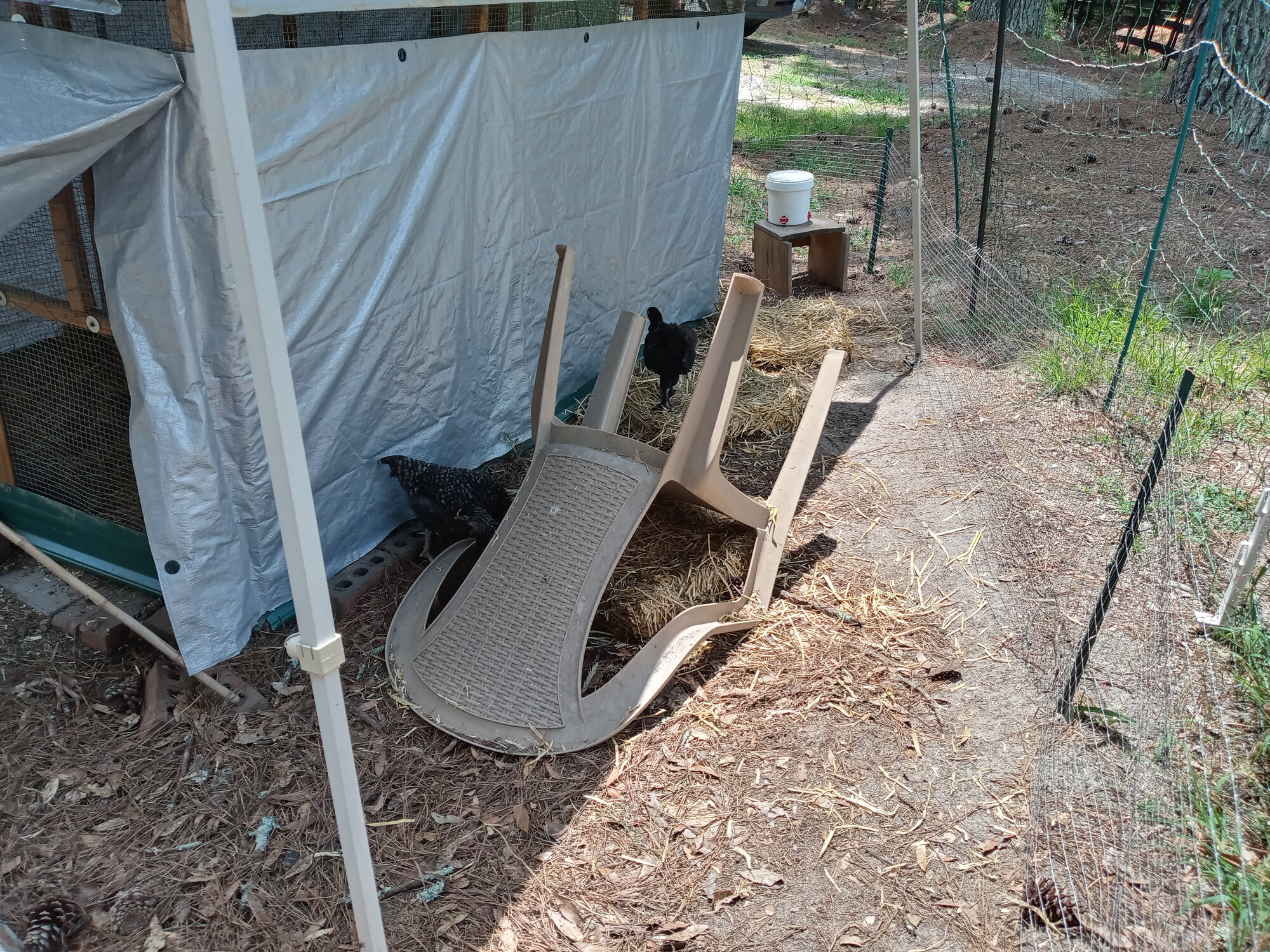 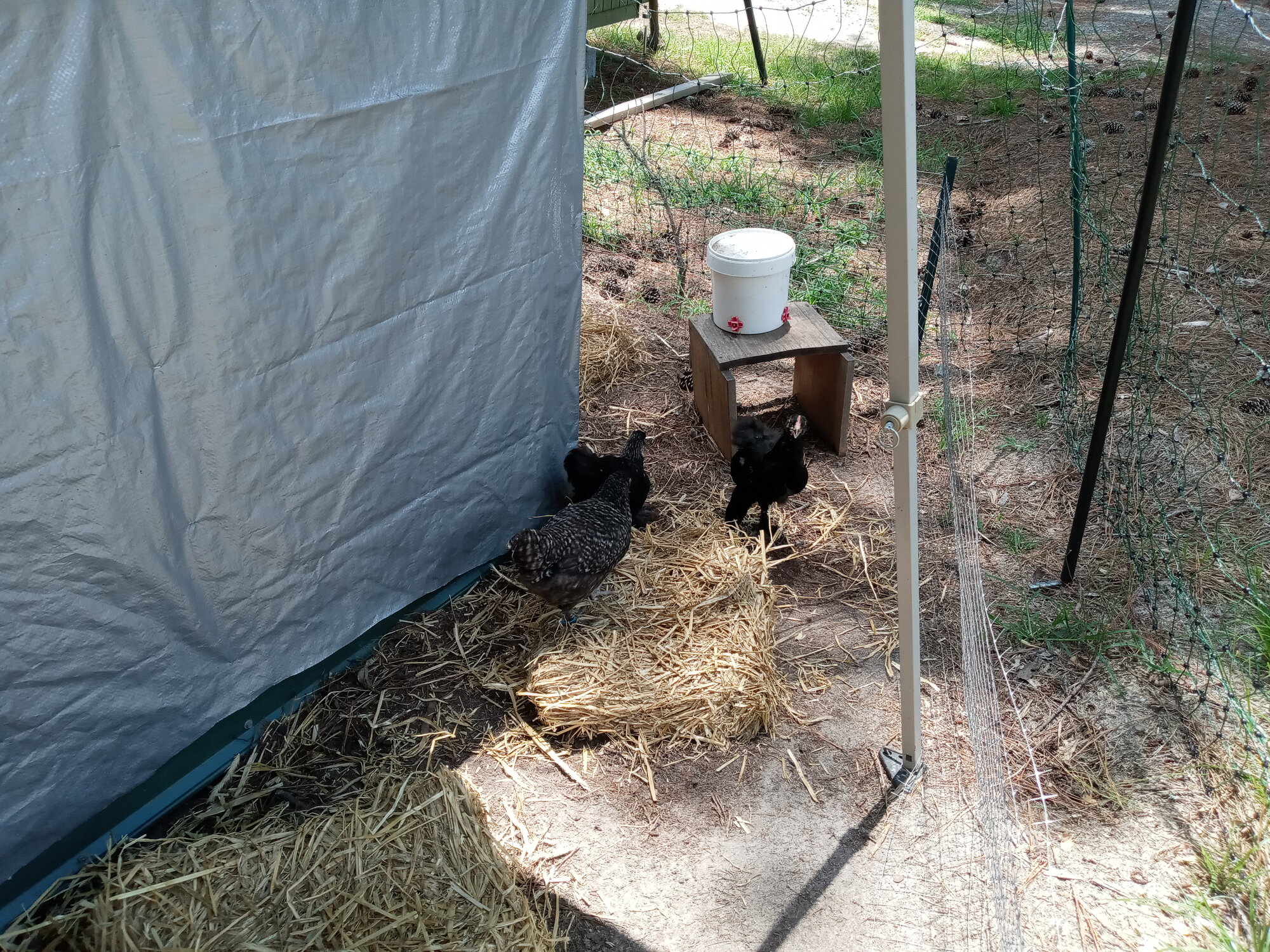 (The intact bale is part of my regular run clutter).

The virtue of straw in my run today is what is normally one of it's drawbacks -- it degrades more rapidly than most other materials I could be using. Slow as the progress seems, I will be moving the flock into the Chicken Palace by fall and I will need to plant grass here. Wood, even fine-flake shavings, would still be robbing the soil of nitrogen but with straw I can rake up the excess and it will actually be good to have some left to protect the grass seed. People planting lawns deliberately spread straw for that purpose.

There are situations where I wouldn't want to use straw, especially if it weren't mixed with other materials. I'm on exceedingly, even excessively, well-drained soil., but people with damp conditions often find that straw is prone to mold so I wouldn't want to spread it in the winter even in my conditions (That intact bale will eventually be opened and spread in my garden not my run and I will wear a mask while I do it).

Also, I don't like it alone as coop bedding because it packs -- forming an almost pavement-like mat of straw+poop.

But even that packing can have it's good side. When I bedded the Outdoor Brooder I laid intact flakes of straw down like floor tiles before bedding over them with shavings. They were splendid insulation between the chicks and the still-cool ground surface.

Finally, tearing the straw flakes apart, like spreading the piles of pine straw, will give the Splits something to do other than harass the younger chicks.

If you're still with me after all this rambling, I actually do have a point.

That being, that I think this makes a nice illustration of why so many different backyard chicken keepers have so many different systems of keeping their chickens -- each suited to a unique set of circumstances -- circumstances that may change over time. Mine will, for sure. Once the Chicken Palace is in operation, I have a truckload of wood chips waiting and doubt I'll have much call for straw other than the intact bales I use for run-clutter and winter wind-baffles.

I like to use hay for the quail and wood chips for the chickens, works nice enough, although I have noticed that with the heat, the coop stinks up a lot faster.
B

You're my inspiration for mixed materials in my 8x8 pen (soon to be 8x16)! So far, chopped straw, hemp shavings, dry willow leaves, wood chips and coir on dirt. It's stayed nice and fluffy, odor-free, and they seem to love it. (They also semi-free range in a larger area.)

Boise-girls said:
You're my inspiration for mixed materials in my 8x8 pen (soon to be 8x16)! So far, chopped straw, hemp shavings, dry willow leaves, wood chips and coir on dirt. It's stayed nice and fluffy, odor-free, and they seem to love it. (They also semi-free range in a larger area.)
Click to expand...

I'm so glad that it's working for you.

Don't hesitate to change up if it stops working -- soils and climates differ so much from place to place that there's no best way.

Very interesting! Yup, read it all the way through.

Yesterday I went around to fluff up all the straw -- because it had, of course, packed inside the coops. The chickens do a great job scratching it up and keeping it fluffy outside, but don't spend much time indoors working the coop bedding.
B

3KillerBs said:
Yesterday I went around to fluff up all the straw -- because it had, of course, packed inside the coops. The chickens do a great job scratching it up and keeping it fluffy outside, but don't spend much time indoors working the coop bedding.
Click to expand...

Mine don't spend much time in the coop, either, but the Sebrights do go in and fluff it up. My theory is that they're sure bugs are in there somewhere, since it looks so much like what's in the run!

Boise-girls said:
Mine don't spend much time in the coop, either, but the Sebrights do go in and fluff it up. My theory is that they're sure bugs are in there somewhere, since it looks so much like what's in the run!
Click to expand...

Mine love their huge run so much that even tossing scratch into the coop bedding doesn't always lure them inside.

That's great! Today, a cochin and brahma were also flinging everything around in the coop. I'm wondering if the new bag of hemp has seeds in it - I have a mix of chopped straw and hemp in the coop. They've never been quite this interested before!

If anything, straw also has stray wheat berries. The rodent has been in my straw garden mulch nightly, eating them, so the chooks would also get a bonus if it's in their runs and coops. Winters here are rather wet, so have used shavings in their coop, and on top of sand in the smaller run. Made the mistake of using hay. Only once.

Building our first coop and run