Ok so about a month ago we found 1-2 chickens dead daily for like 4 days and on another occassion. The others were fine and there was no evidence of disease. What was wierd was that 3 of them were found crammed behind their boxes near the wall. So now that the snow has melted and the water gone down (flash floods).. we found 3 tennis ball sized holes under the coop. One right where we found the chickens crammed. We figured it all out when I noticed one of my calls acting "shocky", sleeping alot. Then she turned her head.. she was missing some feathers. Then we saw it ..the hole. Theory: weasel tried to get call... the drakes scared it off. Last year I had no problems. I feel better about it not being anything I could have done something about but,... NOW IT'S ON!

I have blocked their entrances... here when it dries a bit I had already planned on upgrading the coops, gravel for drainage, wood floors, auto waterer, outside feeder, solar light! As for the calls I really don't know what to do. They have boxes but won't use them. Other than electirc around the base...anyone got any ideas???

I know they are God's creatures... But MAN THEY MAKE ME MAD!

Ohhh jeesh! Weasel and Mink. 2 very hard predators to catch. Better get a baby monitor out there in the coop, so you can hear the alarm, IF it comes back. Then, do like I did, run out there with flashlight, and a gun...BAM. Got MY mink!

I sure hope you dont lose any more.
I think I scared the mink AND the chickens...4:30 am...mid 40's old woman running blindly into the coop....guns a blazin!

I can only immagine! I f I did that I would probably break my neck. Well, the calls are in a temp pen right by where we sleep. So I hear them at night... but the chickens... They are a lil far from the house. I'm not sure if a monitor would work! Good Idea though.

I'm gonna keep an eye out and set our live trap. Mink would be better than weasel... maybe I could sell it as a wrap on ebay.

you may have to bury some hardware cloth to keep the weasels from digging in.

If the live trap is a havahart, and you have no luck with the standard setup over the next week or so, you can modify it by using a thin string, or bit of fishing line so, that if the weasel doesn't trip the trigger plate, it will when it grabs the food tied to the string. Instead of Pikachu (sp.?) in the photos, imagine a raw chunk of bloody meat, the cord I used was for illustration and long twist ties can be substituted for pipe cleaners. When the weasel grabs the bait, the trap's trigger arm is pulled and tripped without the trigger plate being depressed. Once you have the trap in place cover it with a dark fabric of some sort. Make sure to use a bait that is `bloody' fresh.
If the setup isn't clear enough, let me know and I'll shoot a better series.

If you don't mind using jaw traps it's cheap to set up a regular weasel `box'. 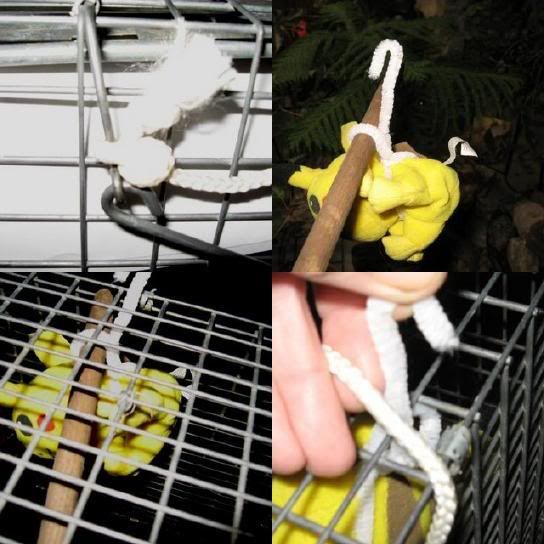 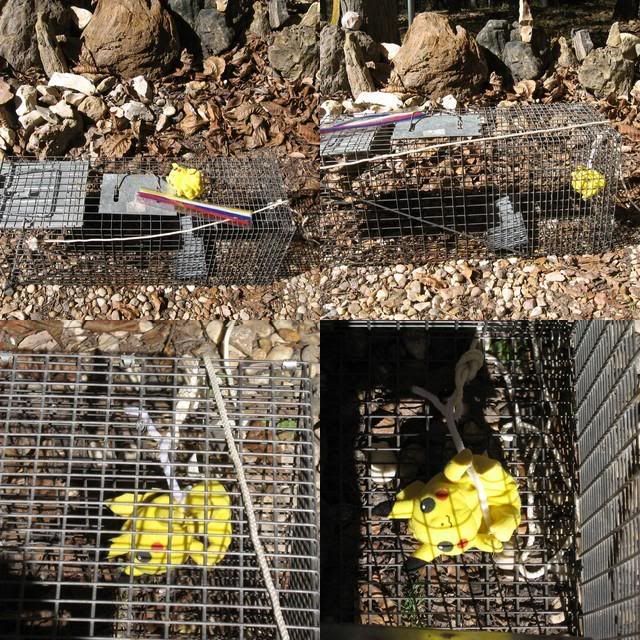 B
Predator ripped hole in hardware cloth and is making a nest?
2