what breeds have dark tinted skin??

I have recently hatched my own chicks. my roo is an EE (in my avatar) of course I don't have any idea what breeds he has in him, I have some EE girls and RSL girls. a few already have green leggs which are adorable, but one has very dark colored skin and I wonder what breeds carry that trate?

I know the silkies have dark skin, but I don't think that is in this blood line at all.

any suggestions would be great! I will try and get picks of the chickies soon
Last edited: Feb 25, 2010
C

Silkies and Cemanis. I'm guessing that it would be Silkie blood as Cemanis are very rare. Pictures would help.

that's the only two?? I really don't think there is a silkie strain anywhere in this mix. the momma hen is an RSL hatchery stock and the Daddy EE I got from a guy a few miles away...not sure where he got them from. but he didn't have any silkies in his large flock

I'm not sure...but going by Henderson's chart Silkie is to only one with black skin....But Spanish, White-Faced Black Spanish, Spanish White Ear, or Clownface (all in one category) have gray skin and Langshan have grayish white skin. I don't know if that helps but at least it will give your post a bump.

Like the Silkie, they also have black skin and black bones.

here is the little munchkin. notice those green legs! and the darker color on the abdomen...that's not feathers that's skin 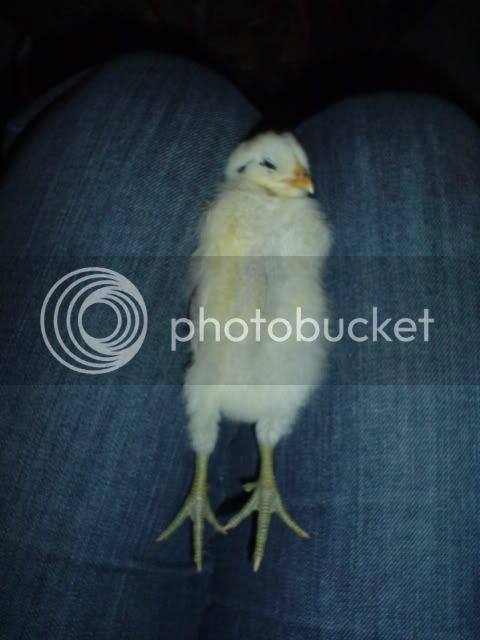 here it is standing up 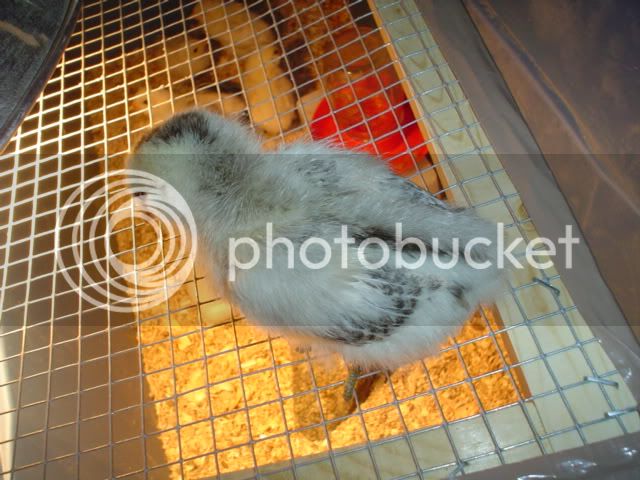 LOL that is just an EE roo lol it has white skin and green legs, typical EE

When you say dark skinned, do you mean the skin or face? Many birds may have a black or mulberry colored face (like Sumatras). One bird i know of besides silkie/cemanis (and is here in the states) would be a Hmong qaib (hmong rooster). Typically dark meated birds raised for meat, i believe they were mostly silkie crosses but I'm not sure on that.

Quote:
I am pretty sure it doesn't have white skin.

well I guess time will tell, I will wait a few weeks and see if it's just dark colored feathers that are making it's skin seem so dark or not.

will update sometime in the future

That EE laying on its back is adorable but still just a light-skinned EE. Pretty sure of it. Otherwise - Cemanis, Silkies, Sumatras (only parts of the body) are generally dark skinned. There are also some with very red skin (even the hens) but I don't know if you would call it dark.

EE rooster with a puffy face? What breeds do you think made him?
2

F
What breed is this?

Breed and Gender Im at a Loss