What color is this silkie chick??

Hello, I'm not sure if this is the right thread for this but here I go.
About a month ago I hatched a white silkie chick who I suspect to be a roo, and in the last week I realized his neck feathers turned into a peachy-lemon color, and he has a bunch of pin feathers on the same color on his back, chest, and tail. He also has a single grey feather on his back. Unfortunately I have no pictures of him right now, but I have images of the parents. I'll get a picture of the actual chick soon. 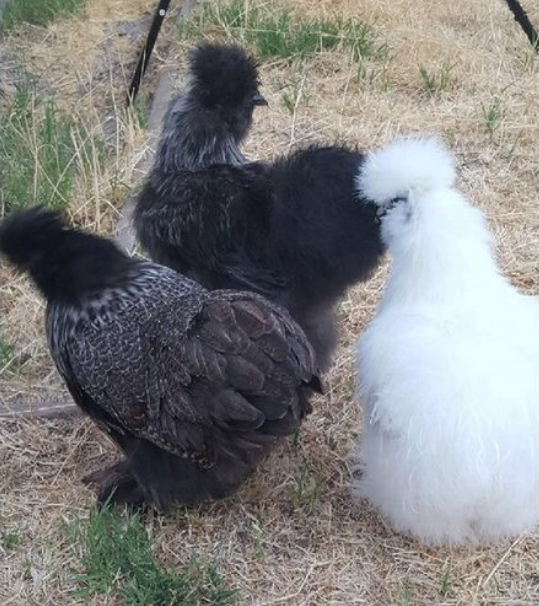 The mother is the white silkie and the father is the black silkie with silver neck leakage. The male also has a very small amount of red leakage on his back that is hard to see.
Does anyone know what color this chick is or what they will turn into?

Could just have leakage or he/she might ne porcelain?
B

Ooh, I hope he's porcelain. I'll post a picture of him when I come home from school.

Are the two birds shown his parents? If so the "black with silver leakage" is actually Grey (silver pencil/partridge)
B

Yes, those are his parents. The white silkie hen and the grey silkie roo. The satin silkie hen is just there, she isn't related at all.

What Color is this Silkie Hen?

Where did this rooster's color come from? Silkies!
2