When to combine chicks with adult hens 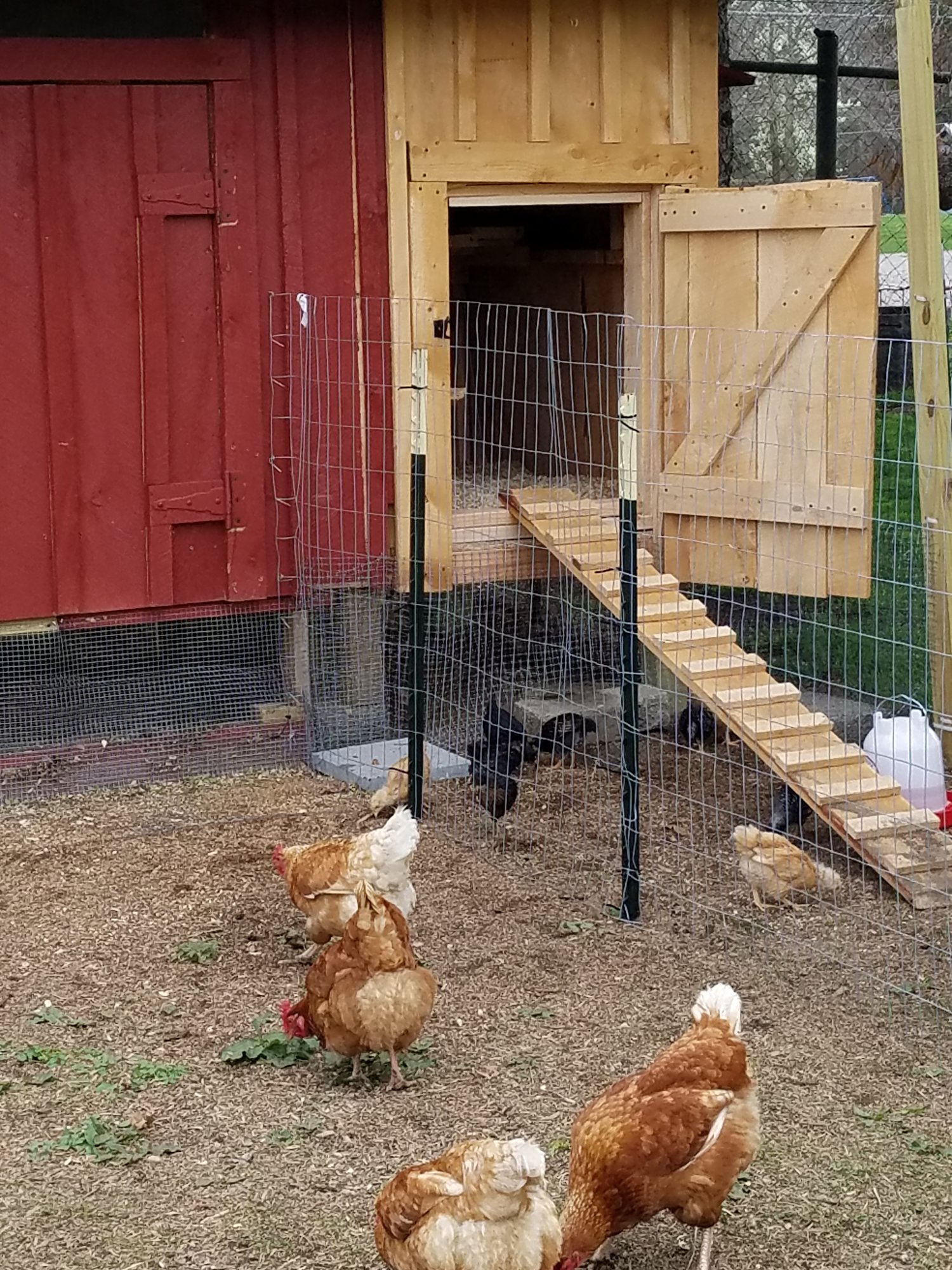 hello, I have had my chicks out in the (coop / run) where the older hens are ( but separated by fencing ), for almost a week now. Yesterday I looked out and seen the chicks on the hens side of the fence, how long they where there I couldn't tell you, I got them back to their side of the coop and made repairs to the fence so they can't get over again, I don't know if the hens noticed the chicks on their side or not. there was (no injuries),
I would like to get them all together as soon as possible, I was thinking on making the move at around 8 weeks old, they will be 5 weeks on Monday, or should I make the move sooner ?
how did you make the transfer?
thanks in advance.

Mine start interesting by week 2-3. I let them have somewhere separate to sleep until somewhere around 6-8 weeks (whenever I need the room back) but they stay integrated during the day. Out of 100s of chicks, I've only lost 4 or 5 and most of those were because of the guineas. The only time I'd advise against early integration is if you have a broody with chicks already in the flock, in which case some will kill chicks that aren't theirs.

We had them integrate at around 6 weeks. Our big guys aren't very mean to them, but the chicks still get pecked a lot. We kept a small cage in our coop for only the chicks to go into. The chicks stick together and protect our little silkie bantam. I think in a week or two they should be ready to integrate with the big chickens.

Thank you for your replies,

Mine go outside at 5 weeks where they can be seen but not touched for a week. At 6 weeks they go in with the big hens with a panic room and lots of hidey holes and places to get out the way. They do fine

What if the chicks are 3 weeks and 5 weeks old? Think they can be put together faster in the coop?

Katt47 said:
What if the chicks are 3 weeks and 5 weeks old? Think they can be put together faster in the coop?
Click to expand...

Yes, they can be put together. They don’t start the pecking order till a month or two.

I integrated at 4 weeks from my coop brooder, with a panic door. It went so well with them that young, that I'll be integrating the same way from now on. There was a little pecking and chasing, but it was like, get out of my way, not an attack peck. I got this idea from @azygous & @aart

I would cut a hole in the fence right now and put a piece of wood up with a hole or two big enough for the chicks to get through(panic door) but not the big girls, in case they need to get away. The wood or use cardboard, will define where they have to go easier, than finding the hole in the wire fence. Also put some things in the big girl run for the chicks to get behind, but not trapped. A piece of plywood leaned against the side, a pallet up on blocks for them to get under...
Here is a pic of my brooder set up with the panic doors made out of cardboard. I think you'll be surprised how easy it will be this young. They were already on the other side and you didn't see any aggression. 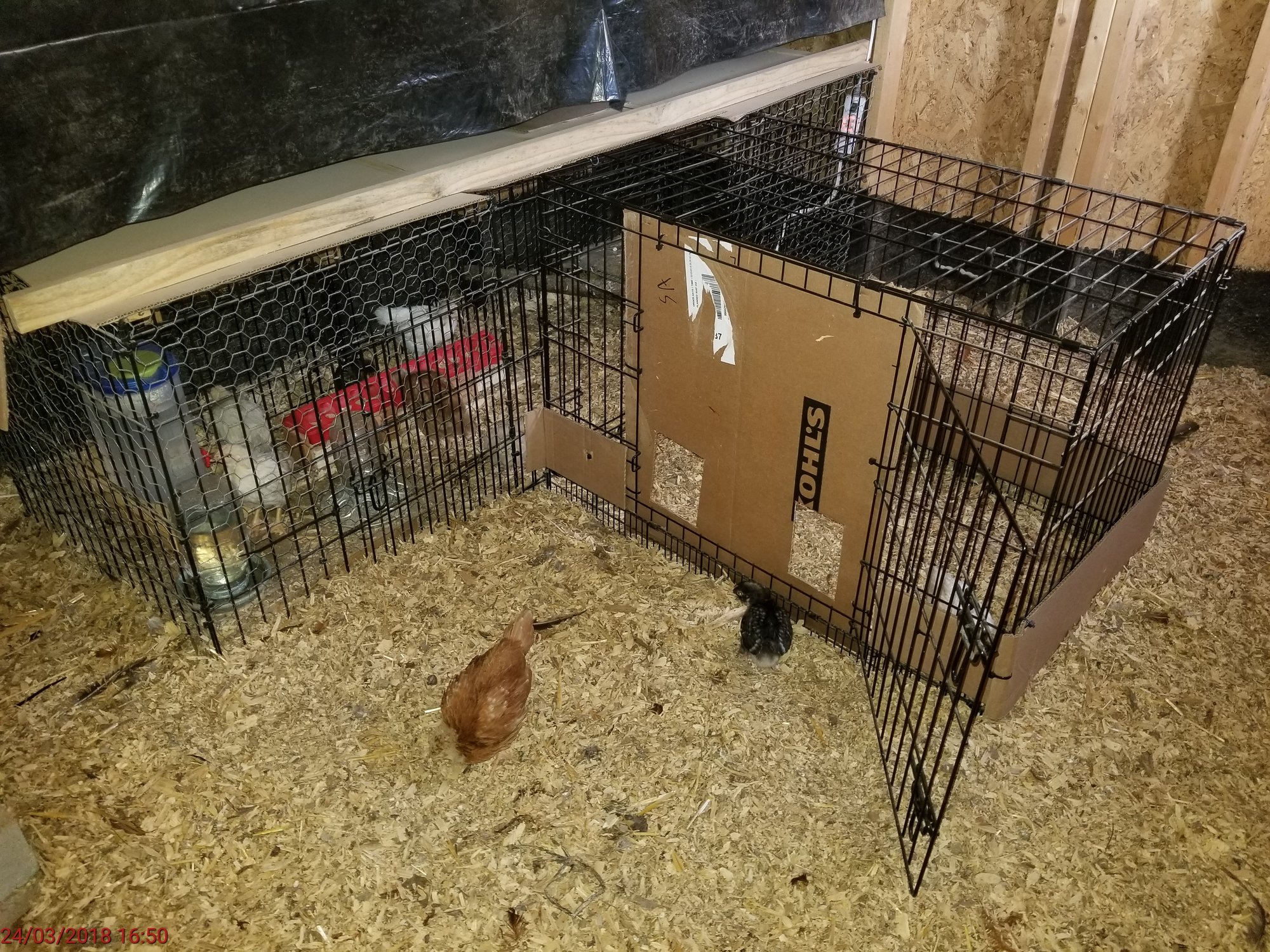 At 6 weeks they were up roosting with the big girls.

blackdog043 said:
I would cut a hole in the fence right now and put a piece of wood up with a hole or two big enough for the chicks to get through(panic door) but not the big girls, in case they need to get away. The wood or use cardboard, will define where they have to go easier, than finding the hole in the wire fence.
Click to expand...

Excellent idea...using cardboard will allow you to more easily adjust the size of the holes.
Start small with the holes, it's amazing how small a hole an adult bird can get thru.

I think I will cut panic doors in the coop and the run today, I have things in the run for ther chicks to get under/beside if need be. See what happens, if the rain ever stops
You must log in or register to reply here.
Share:
Reddit Pinterest Tumblr WhatsApp Email Link