Which Rooster to keep to breed and which ones to butcher. ?

Last time we had only laying hens, on 3/13 this year I bought 4 Barred Plymouth Rocks, 4 Buff Orph, 4 Black sex link, 4 Arracaunas, 6 Langshans all of these are Straight Run and then we have 4 Rhode Island Red Pullets.

Now the roosters are showing themsleves. The plan is to butcher all but one or two. I have 2 Langshan Roosters and 2 Arracanus Roosters and one buff orph and one Barred Rock for sure that I know of.

Does it really matter? I bought the six langshans at tractor supply and all the others at rural king.

We are going to butcher 2 or 3 roosters this weekend.

Based on the birds I have what would be a good rooster to keep as a breeder?

Thanks to all for your wisdom

First we need to know what your goals are for your flock.

Most importantly, do you want fertile eggs for the purpose of hatching chicks? And if so...

Are eggs most important to you, or producing your own birds for meat?

If you want eggs for eating the most, then you'll want to save roosters of the breeds that make the best layers...

My family wants dual-purpose, gentle, hardy birds (though eggs are more important than meat), so we keep rooster of large breeds that lay well, such as Barred Rock, BA, and RIR.

honestly there is no plan -although I guess you could say we are looking for dual breeds - we have had hens only for eggs in the past, I use to butcher about 25 years ago on the family farm, now that I have my own hobby farm I am simply wanting to have a rooster or two because I didn't last time and my father tells me the hens will be happier and lay more eggs if I have a rooster and when I am working out in the garden I actually like to hear crowing. And besides it will be neat to welcome new chick into the family.


What about keeping the white aracauna rooster to breed all the others? Or I know I do have 2 Langshan Roosters and then the Barred Plymouth Rock (I think) is reallybig - but he looks like some type of cross too - I wouldn't really say he is actually all Barred Plymouth Rock - who knows!?

It sounds like you don't have a big plan together yet for the chickens (probably like me, you have about 400 other items on the to do list owing to a big garden and many interesting hobbies!).

In that case, I'd keep one or two well-mannered roosters. You can start with two and downsize to one if necessary. If you're not going to be seriously breeding chicks, then there's no real need to make sure that all the eggs are fertile.

My favorite rooster is actually a Barred Rock (he is also the favorite of the hens, as well). He's vigilant, gentlemanly (calls the hens over when he finds a treat, dances for them, non-aggressive to humans), and he's a smart bugger, too. He was actually on the chopping block as a half-grown roo, and demonstrated his courage and intelligence by attempting to aid a comrade and then attempting to fly the coop. I spared him and haven't regretted it.

It's hard to tell how they're going to behave when they're all grown up. I might keep the two most-promising roosters with an eye towards stewing one later if necessary.

Here's a picture of my favorite Rock. Note the steely glint to his eye. He just took a mealworm from my hand and fed it to one of the hens, and now is trying to figure out if I have anything else yummy to offer. He thinks I'm some kind of dispenser. 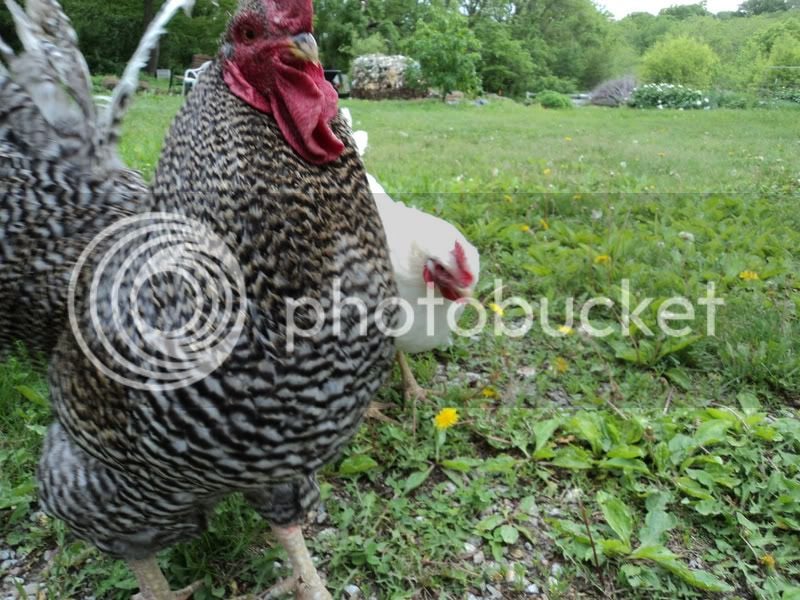 wow thats good advise, didn't even think of the personality option, I will spend a while in the run tommorow studying up on who is the coolest bird! I will probably have a beer and hang out with the birds and see who stands out. Thanks allot.

Right now.. I have two adult roosters in my free ranging flock - I have a couple more in breeder pens with their personal harems.. but at the time I made the decision to keep the other roo in the main flock.. I only had 8 laying hens. Now I have a "bunch" of various aged teen chicks and nearly grown chicks in that group. This second rooster was bought as a pullet.. but well.. was a VERY TALL girl..until we noticed other signs that she was really a HE. I figured since I only had 8 grown hens in that group..I just needed the one roo. I had penned him up intending to sell if possible, process if not... when a hawk took out one of my teen chicks in the yard. I was advised by fellow BYCer's that I might want to consider keeping the second roo.. since he was close to grown and see if he would help alert the flock.. two sets of eyes are better than one... especially since all the girls insist on scattering to all areas of the yard. I have personally witnessed both roosters rushing towards a hawk that landed on the fence..from opposite sides of the yard .. while sounding the alarm.. so he gets to stay. That was two months ago and I haven't regretted the decision.

I would not keep one that seems aggressive. I think that would just be trouble later.

I personally do not think there is anything wrong with mutts as long as you are not in a specific breeding plan or raising them for show.

Which rooster do you like the best? Which rooster would you like your future chicks to be like, both looks and traits? That's the one or two to keep.

You don't absolutely have to get a new rooster every year as long as the chicks don't show traits you don't like. Some inbreeding in chickens is not the end of the world. That is how breeds are maintained and champions are made. Every time you introduce an outside rooster, you take the chance of introducing traits you don't want. Yet too much inbreeding can become a problem eventually. For most small backyard flocks, introducing a new rooster every two or three years is plenty often as long as you select your breeders for the traits you want.

Good info. This is the stuff I need to hear since I'm wanting to have my chickies hatch some more eventually.