I am not sure if this is weird or not, but leave it to me to have wierd chickens. 4 of mine, I bought them to together as chicks. 2 Black Australorps and 2 brahmas. I had to find a new home for one Brahma, turned out to be a roo. Anyways, they did this when I still had him though too. They sleep in the corner of the pen, outside, all cuddled together. Usually in a pile. I will go out there and one will be buried on the bottom and the others all piled on. They seem to want to be on the bottom. I have seen them shove to get under the others..... I have seen them out there at like 2 in the morning. When I get up, they are usually in the coop by then and stay in until late morning.

My Americauna (who I got later and is younger than them) stays in the coup most of the day. I think she's afraid of them. She sleeps in the coup.
Last edited: Sep 7, 2011

I hope for their sake that the run is hardware cloth. Otherwise you need to move them into the coop each night (and put them on the roosts) until they start doing it on their own.

Strange to me. Mine put themselves to bed in the coop at night. I thought mine were odd because they don't use the roost to sleep on or the nest box to lay in they prefer the back corner of the coop for sleeping and nesting. But they do sleep all cuddled together.

try putting a light in the coop that will make them want to go in from the dark at night. and maybe get to lock them in so they feel safer.

I have to physically put mine in at night unless I turn on the warming light. The silkies are just getting into the habit of being outside and they don't want to go in but I want them to get into the habit of going in at night because winter is coming. They huddle together in their little "hole" under the coop when it's bedtime. The frustrating part is that I have to crawl under the coop to get them. Last night it was 10 trips on my knees LoL

I got some pullets this summer who had never had a real coop. I had to physically put them inside on the roosts each night- they wanted to sleep in a huddle in the run. It took 3 nights of my intervention and they were roosting by myself. I think you need to teach them a few times.

Ditto to what others have said. You need to tuck them in at night for awhile. Go out there around dusk and transfer them to the coop and on the roosting platform. It will take a couple of nights, but not too long, and they'll start going to bed themselves.

Quote:
it's a matter of security and mine did the same thing. they cuddle like that when they were chicks and they didn't want to apart from each other. it was matter of time they stopped that behavior and roosted on their own with no help from me. i would give it more time. if another couple weeks they're still doing that, i would teach them to roost. put them on it at night and close the door.

The pen has wire mesh around it. The back door of the coop doesn't have a door on it yet, we have to put one on. So, once we get that on, they I will put them in on the roost. They do go in now, it's just late. Now that it's getting cooler out, they don't stay out as late.

What's weird, is they would roost when they were chicks and staying in the garage (in a brooder type box). Once put out in the pen with the coop, they didn't do it anymore.

As for getting a light out there, that might be difficult , since it is not near the house for electricity. It is pitch black out there, so they are staying out due to any light outside.

This as pic of the pen and coop. They always sleep in the same corner. The one closest to where my husband is standing. This pic, we were introducing our dog to them, who no longer pays any attention to them 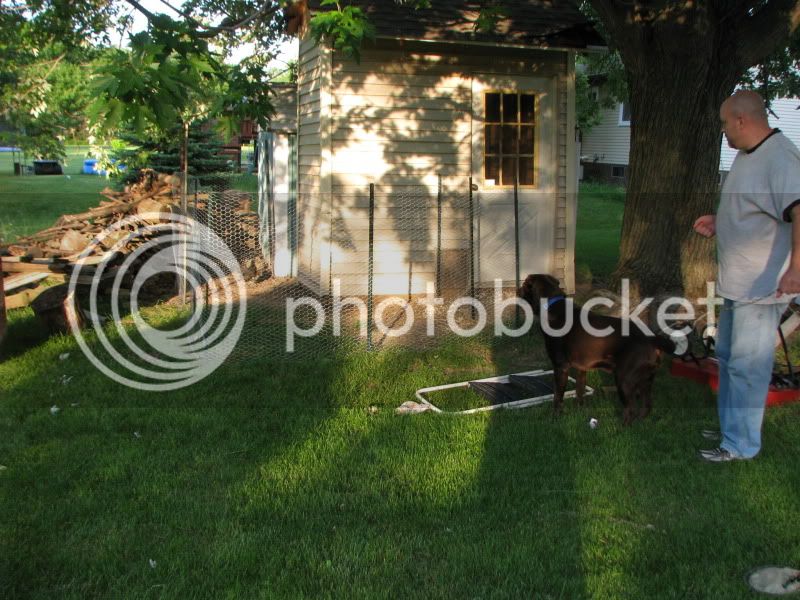