Hi everybody!
I'm wondering if my 2 week old olive egger chick is ever going to grow feathers on her back where there was a large injury when she hatched?

Here's the story;
I gave my broody brahma a few eggs to sit on a few weeks ago. They hatched but mom decided she only enjoyed sitting on eggs but not raising babies so she pecked at the first hatched baby to the point where it had a large wound on it's back. The skin was torn open and muscle was exposed. It took up a very large portion of the chick's back.
After a week of worrying if it would ever close up and a week of treatment with wound care, it has grown new skin and it looks beautiful aside from one area that still has some time to go. It's back is starting to look normal again and it doesn't have any exposed muscle tissue.
The question I raise though is there a chance the chick will ever grow feathers there? Or has the skin been too damaged? I worry about it in the winter because Connecticut can get very cold. The chick's wings cover the wound for the most part - but she'll have a very cold back if nothing grows.

Here are some photos. Ignore the bluekote. I used it once to help her as it was all I had on hand at the time. 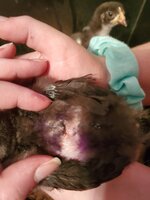 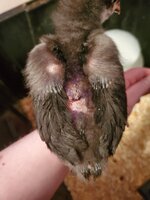 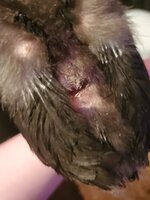 It should grow feathers that cover the area, but it may be a few more weeks to months as it generally takes them until 2-3 months to fully feather, and they won't grow in their adult feathers until generally after 3 months.

How sad for this little chick to have mama peck at her.

I think the feathers will grow in when she begins to feather. Did you rescue the other chicks from the mama?

ValerieJ said:
How sad for this little chick to have mama peck at her.

I think the feathers will grow in when she begins to feather. Did you rescue the other chicks from the mama?
Click to expand...

I was able to rescue one of the siblings. I didn't have an incubator so I planned to let mom hatch them to a certain point before I would take the hatching babies away. I got the second one but unfortunately I wasn't quick enough with the last baby and it didn't make it. I curse myself almost daily for it but... I got the two and I was able to recover chick #1 despite the injuries. Poor baby didn't walk well for an entire week because it would stretch the skin too much to move.
Oddly enough, both of these chicks don't have the right number of toes. They all hatched missing the outer toe on each foot! Even the baby I couldn't save had this deformity and it was a completely different breed than an olive egger. I read somewhere it could've been due to too much heat during incubation. Which means momma was all around terrible at this

Won't be giving her eggs anytime soon. It's the Broody box for her next time!

Unfortunately some first time moms are terrible at it. I'm glad you were able to save them. I'm always anxious when I'm hatching with an untried hen. You just never know.

Injury-hole in crop, contents coming out

U
Chick Pulling Others' Feathers