We have 8 hens that are 21 weeks old. 2 NH Reds, 2 Buff Orpingtons, 2 Barred Rocks and 2 Easter Eggers. One of my Barred Rocks had really developed the largest comb and wattles and they had turned very red. She also began to do the "squat" a couple of weeks ago, whenever I would reach my hands toward her. The day before yesterday I noticed that one of the nesting boxes had a nice round nest formed into the straw. Prior to that I always saw various color feathers in all 3 nesting boxes, but, nothing looking like a round nest had been formed. The day before yesterday had a clear nest formed, but, nothing in it. Yesterday, when I got home from work, there it was. A little brown egg. I'm sure it must be from that Barred Rock hen. The other Barred Rock does not have as large of a comb or wattles. None of the other 7 do the "squat" yet. Hopefully soon!!!! So exciting!! 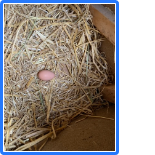 Congratulate your chicken for me! How eggciting!

Congrats to you and your lady!!!

Thought I'd get another one today. Do they usually start laying everyday right away or is it intermittent at first. I've had hens before but I forget!! lol

Congrats. I am new to chickens but got my first eggs last Saturday and Sunday but nothing since?!!?!

3mile said:
Congrats. I am new to chickens but got my first eggs last Saturday and Sunday but nothing since?!!?!
Click to expand...

That’s kind of odd. Are you sure they’re not laying somewhere else?
W

Won't be long now! We still only have 1 laying so far. She's laid 3 out of 4 days so far.
You must log in or register to reply here.
Share:
Reddit Pinterest Tumblr WhatsApp Email Link