My young hen, about a year and a half old, is not allowed by the others to roost. She spends her nights on the floor. I put her on the roost but she ends up back on the floor. They also peck her head when she tries to eat. I finally started letting her out to eat first then open the coop for the others to come out. By then she's eaten what she wants and wandered away from the feeder.

A bit of history: as a pullet, she was attacked by a bully rooster which I culled from my flock but not before he'd injured her. He laid her scalp open and I was afraid I'd have to put her down but I learned how to clean and dress her wounds and kept her in the house for the two months it took her to heal completely. I diapered her and she became quite comfortable in the house. Then I began to introduce her back into the flock of four other older hens and a young roo. This was last year and I just assumed she was roosting. This spring however I would find her wandering around after the others had gone to bed or she'd be roosting in a vine that grows over the top of the coop and I'd have to get her down and put her in the coop. It seems she's afraid to go into the coop. During the day I'll sometimes find her by herself but I find the others by themselves from time to time too. I'll also find her with the rest of the flock through the day and everyone seems to get along fine then.

She's only laid two eggs that I'm aware of, one a fairy egg and both quite small. She's also been broody three times this summer; wondering whether the extreme heat in our region had anything to do with that or whether it plays into the rest of this.

I've thought to diaper her and just let her be a house chicken. That sounds sweet but it also sounds unnatural yet I don't know what to do for her to be safe and happy.

I've read through a number of other threads here that address the roosting issue but I still wonder whether her early history of having been attacked and then separated from the rest of the flock for so long has anything to do with the socialization issues I'm seeing now.

If she's fine spending the night on the floor, no reason to not let her do that in this case, or you could try making a low mini roost just for her to use.

How many feeders do you have vs how many birds? Any clutter in the run to break line of sight provide coverage to prevent birds from feed guarding or is just a big open rectangle?

She is the low chicken in the pecking order and she was injured. Chickens can sense when another is not well and they will be very mean. Because you kept her in the house for months they put her at the bottom of the pecking order. I have a crippled chicken that the rest of my flock hates. They will gang up on her and peck her head. If I didn't come to her rescue she would be dead. She didn't come out of the main coop for a week so my husband made a platform and I would put little dishes of food and water up there for her. It got too hot for her to stay in this coop. 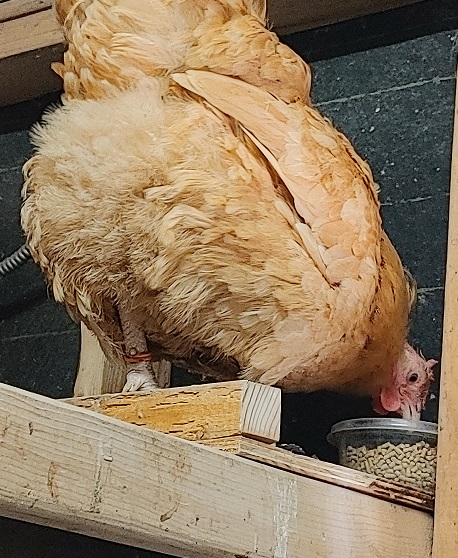 Fortunately I have three coops and she now hangs around the little one that the others avoid. She is free to mingle with the others, but of course, she does not. I have 3 feeders in different areas so she can get food and have 5 pans of water. She goes out and dirt bathes, eats and drinks when the others are not around. I don't know what setup you have, but putting many feeders and waterers around will ensure she can eat and drink and not be tortured. My Buffy, the cripple, used to be one of my best layers. She is 4 now, doesn't lay anymore. Good luck with your girl.