Young Pullet Not Able To Keep Her Balance

I have a young pullet that I found this morning laying flat out, at first I thought she was deceased. She was breathing but unable to move. I brought her inside and put her under a heat lamp as she felt very cool to the touch. A few hours later she is alert, sitting up with her feet under herself. She can stand, but if tries to take a step she quickly losses her balance and falls backwards or to the side. Interested in food and water. I have tried searching neurological issues and looked at Mareks as a possibility (doesn't sound like this is what she has...could be wrong though). Any help, insight, advise would be awesome.

Get some chick vitamins with electrolytes, and try to get her drinking. She may just be dehydrated or overheated. Is she having any runny droppings? While Mareks may be a possibility, even coccidiosis can cause weakness or imbalance. Eating moldy feed or botulism can be other causes for lameness. Hopefully she will start to improve with drinking water. Adding water to a small amount of feed, and offering raw or chopped egg would be good to try.

Thank you, I will do that and continue to monitor. I have electrolyte water for her already, she seems like her normal self, minus the balance issue. She was in with other young pullets, so the chances of being injured would be slim, but possible. I already treated for coccidiosis and dust our coop and chickens in DE and Seven Dust. However it is possible she may need to be treated again. Thank you again for your advise

I was feeling her legs as I noticed a dark bruise...one of her legs at the hip joint seems like it may be out of place or broken? I know this may keep her off her feet...if this is what is going on can her leg be splinted or is it just rest and recovery?
She is eating a drinking like a champ right now as well

Can you post some pics?
How old is this bird?
Why are you treating with Sevin and DE?

Yes I will take some pics in a moment. She is around 3 months old, she is a Cochin/Barred Rock Mix. We had a huge mite/lice issue. I treated the coop with Seven Dust and dusted all my chickens with DE. This was over two weeks ago and have not seen any evidence of mite/lice activity. Give me a moment and I will post pics.

Here are pictures of her standing and of her leg that looks bruised. I have a short video of what she is doing as well, but not sure how to upload it...it won't let me attach it. 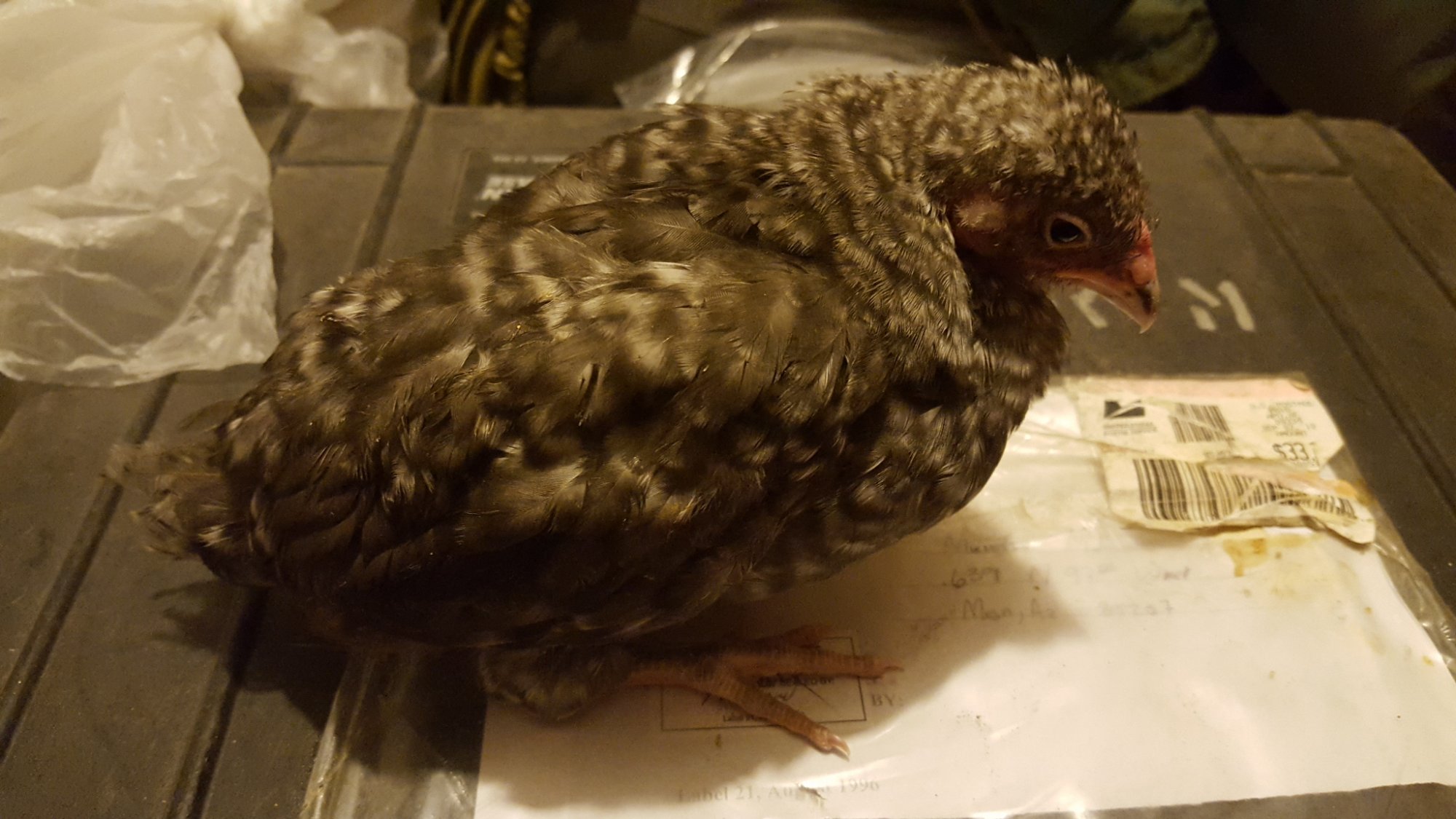 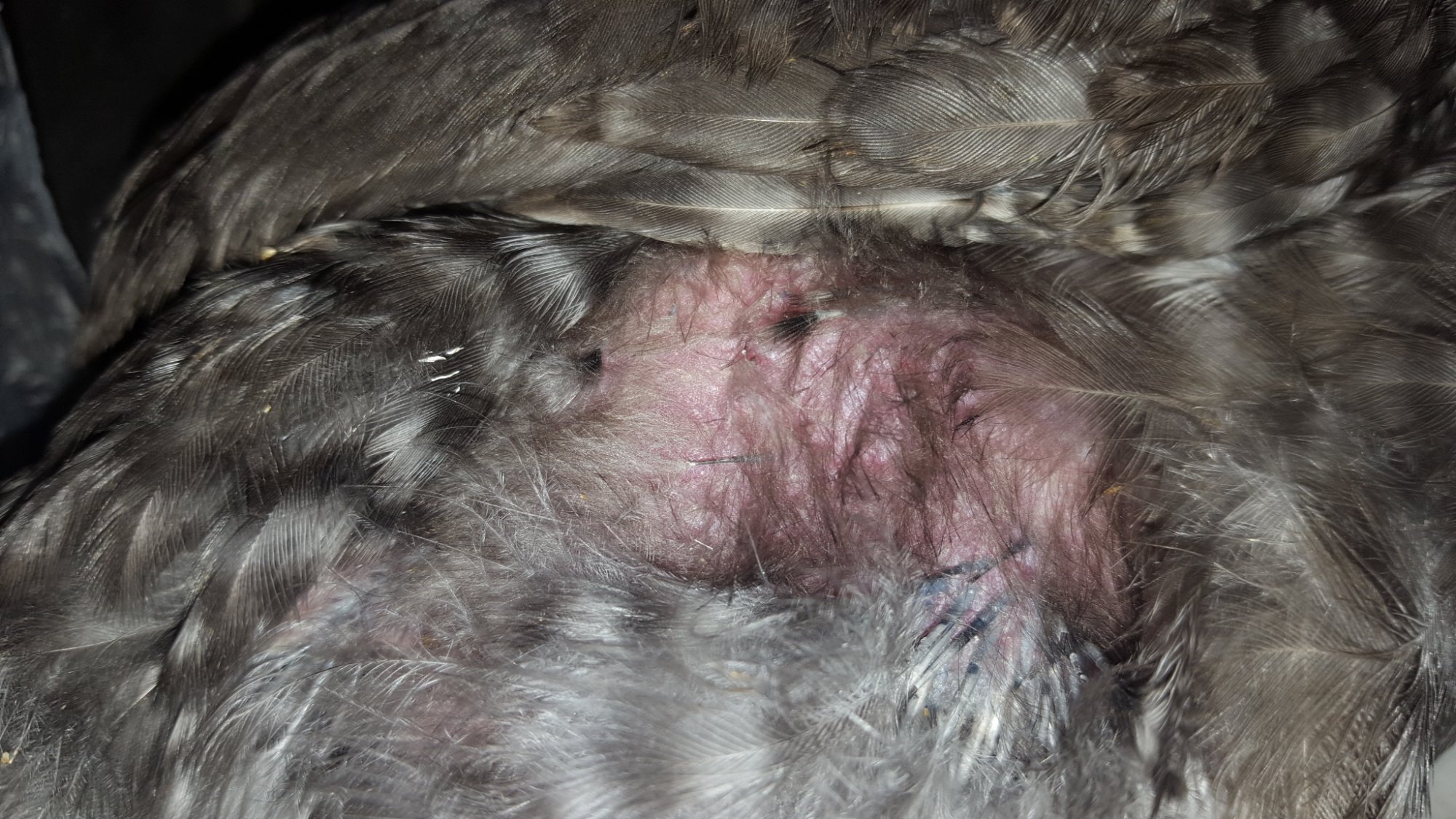 If there is no improvement later tonight or in the am when I feed, I am going to put her down...she doesn't appear to be in pain...this is just not fair for her

Would love some insight...all of my other chickens are healthy and fine.

Video needs to be up loaded to youtube and made public.
Can't really tell much from the pics.
'Sitting' pic from front and other side might help.
Maybe hold her on her back to see the alignment of her legs.

Hard to say what is wrong or what to do....if hip joint is actually dislocated probably only a vet could fix it.

I put lame birds in an isolation cage for 'forced' rest and to observe how they are eatingdrinkingpooping. Letting them out at least once a day to watch mobility.

You'll have to use your best judgement...can be a hard call.

Thank you for responding, I have her in an isolation box. She rested comfortably all night, was up eating when I looked on her, however still falls to the side.

Hopefully this video can be viewed now as I followed your suggestion, thank you.

How to manage the flock after potential loss with Marek's?

A
Chicken unable to stand – keeps both legs straight

C
Chick is having balance issues
2 3

Pullet in A Coma!!