So this is our chicken coop. It's a 32' long camper trailer, gutted and turned into a chicken palace

We have about 70 birds who are happy to pay their room and board with abundant eggs. 15 Australorp hens and 1 rooster "Big Boy" 2-yrs-old, one RIR rooster "Old Red" 5-yrs-old (the only one left from our original flock), one lucky and vexatious little Old English Game bantam rooster "Little Sh*t" 3-yrs-old who thinks he's boss of everyone, including me; one BPR rooster 7-mo-old learning the ropes "Pretty Boy"; Two Americauna hens, age unknown, which were rescues from another farm; and the balance are RIR and BPR hens, 7-mos-old. They bring much fascination and work into our lives, and we supply many family, neighbors, friends, and people from town with nutritious, tasty eggs.

First, the run. We have the camper placed in the center of a 60'x50' run, fenced with 8' high chainlink fencing. No roof over the run, but I have some netting with which I plan to cover the entire run soon. Meanwhile, we have placed several objects under which the girls can run & hide from avian predators if needed. And they have the entire width and length of the camper under which to rest in the shade, take dust baths, or whatever. The feeder area is an old satellite dish turned upside-down on a pole, like an umbrella. Sections of a second satellite dish are placed here and there on the ground for cover and shade. For feeders, I still use just metal troughs, which get filled each morning, underneath the umbrella. I have two waterers nearby, which get moved indoors only when temps are cold enough to freeze them. And a dish of oyster shell and grit. Afternoons, when I collect eggs, I toss some scratch or kitchen scraps to the girls and open the run gate so they can free range on our pasture and farmyard.

We picked up the camper for $400 from a craigslist ad

Had good tires to move it 100 miles or so to home, a watertight roof, and all the windows intact. What more could we need? We gutted the interior, except for one wall separating the front half from the back. We laid new plywood subfloor over everything (needed it - was rotting out in places, especially the bathroom!), then covered that with vinyl flooring. I installed 2x4 wood bumpers all around the perimeter inside, to make cleaning easier. We covered windows on the inside with wire mesh, so we could still operate the cranks to open/close them for ventilation. The front camper window awning wasn't operable, so it's been screwed down permanently. Offers better protection from north winds anyway. The south (rear) end of the camper is windows, too - and I plan to install an awning over that before summer heat gets much worse, but hinge it so I can raise it in winter to let light and warmth into the camper.

What used to be the central kitchen area (upper cabinets saved) is now storage for brooder equipment and barrels for feed. The front section is a brooder area and more storage for scratch and wood chips. I kept the old shower stall, laid it on its back, and shoved it against one wall in the front. It's now a waterproof and easily-sanitized brooder pen

I still have to construct a wire cover and hatches for the top, and a system for raising/lowering heat lamps.

The back half of the camper turned into a roosting and nesting area. I cut small trees from our property for roosting bars, and attached them to slanting support boards mounted to the walls and floor. The bottom bar is removable to make cleaning easier. I wanted the rear hatch door (wide exterior storage space) opened to the inside, so I could just shovel their chips and manure right out the back of the camper, but hubby nixed that idea

We installed a pop-door into the lower half of a rear exit door, and that's where I shovel the yuck out as well. I remove the birds' ramp, spread a tarp on the ground, and shovel it out. Then I drag the tarp to our compost heap and vegetable garden.

On one wall opposite the roosting bars, I built a shelf system with leftover scrap lumber and plywood, and installed 10 nesting buckets. They are 4-gallon buckets that used to hold drywall mud, and are the perfect size, easy to clean and sanitize. I cut the middle of the lids out and left a 4" lip to keep chips and eggs inside. There's a 4" shelf in front of the rows of buckets, with a removable 2x4 across the front of each shelf so the girls have somewhere to land, move back and forth, or wait in line for the next available nest. I have chicken ramps going to the lower and middle levels, with a third ramp to be added to that top shelf soon. With three broodys now occupying three buckets and the pullets reaching full egg production, I need to add another row of buckets on that top shelf for 15 total.

There's a wooden screen door (reinforced with chicken wire) separating the front and back halves of the camper. It stays closed to keep birds out of the front storage and brooder area, but allows easy access to collect eggs and check on everyone inside. On coldest winter days when I need to keep the girls closed inside, I can open the divider door and let them have the full interior to spread out. Plenty of room for feeders, waterers and play area. Makes a mess later, but I have healthier, happier birds and less stress and picking on each other. During brooder season, the chicks and adults can share the camper in their own space, and still see and talk to each other through the wooden screen door. So my hope is that this makes integration a breeze later. Haven't tried it out yet.

Hope you enjoyed my ideas, and please feel free to offer your own thoughts! Thank you. 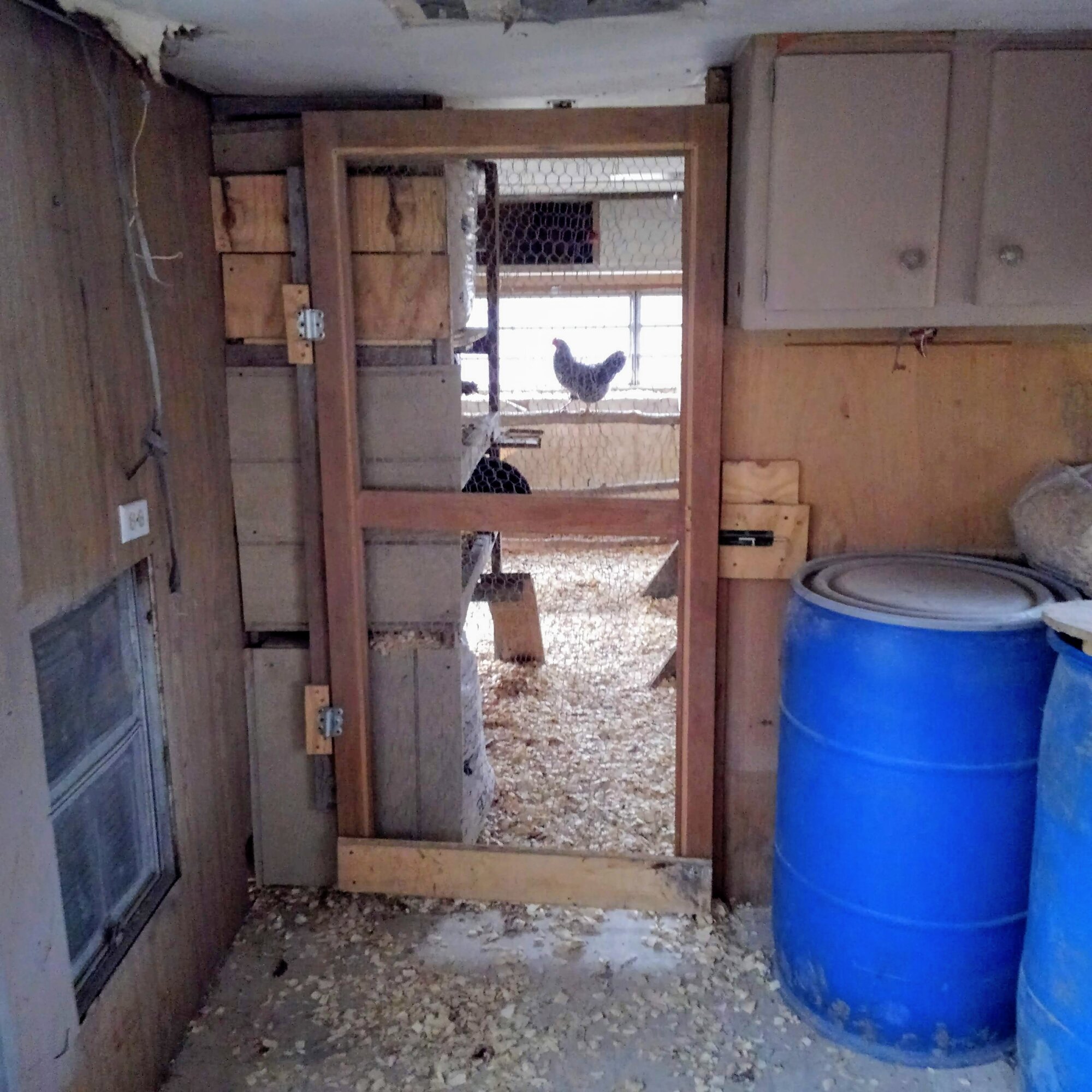 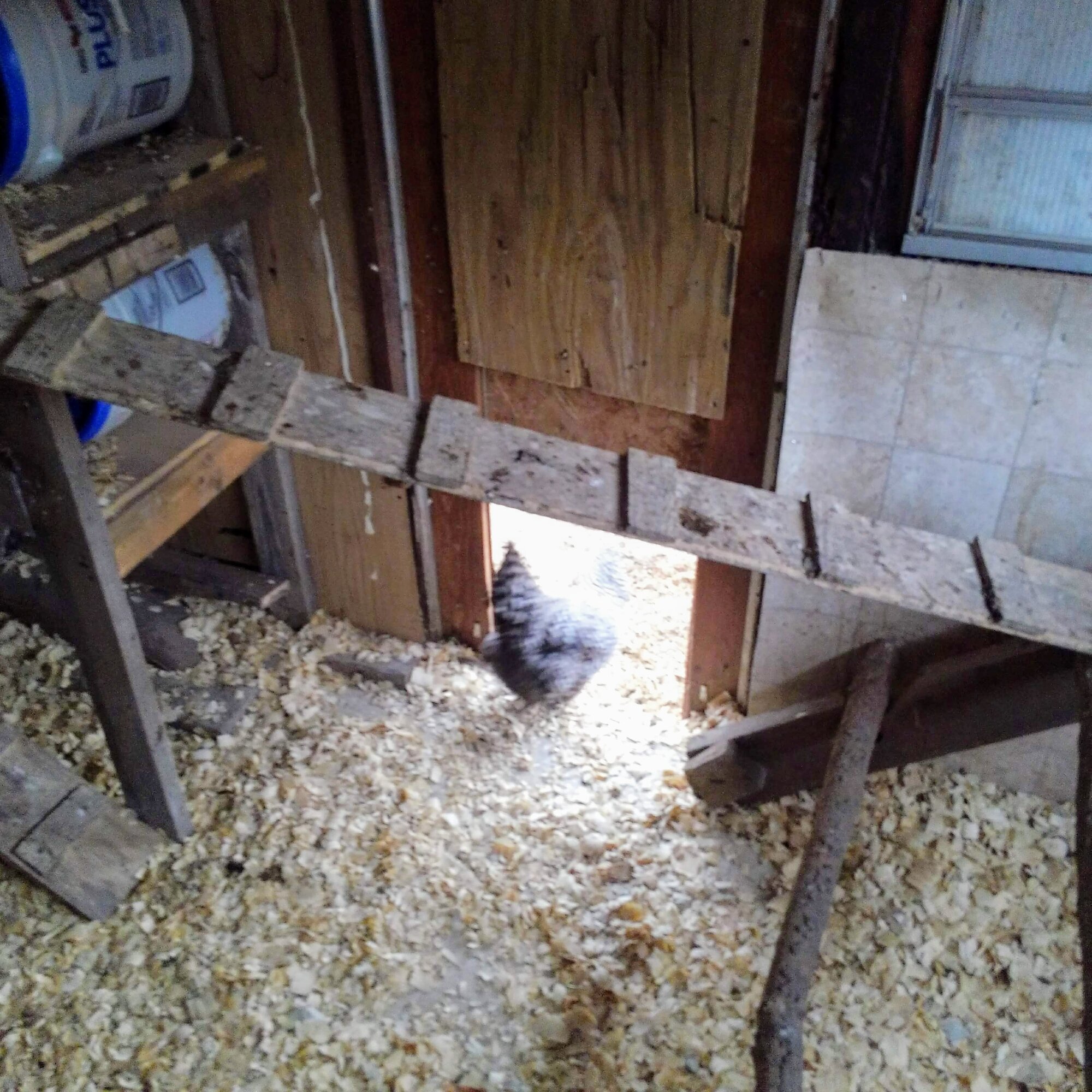 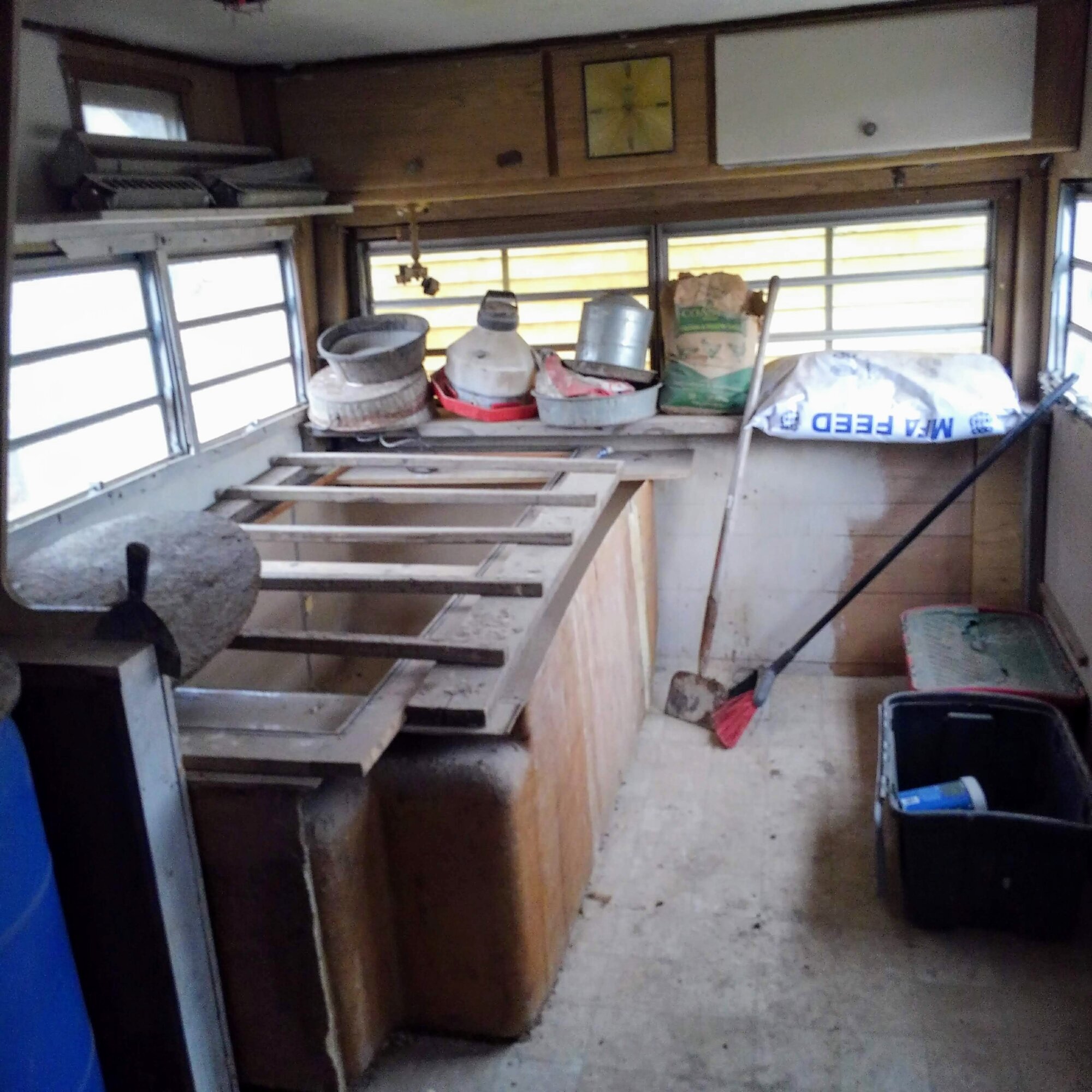 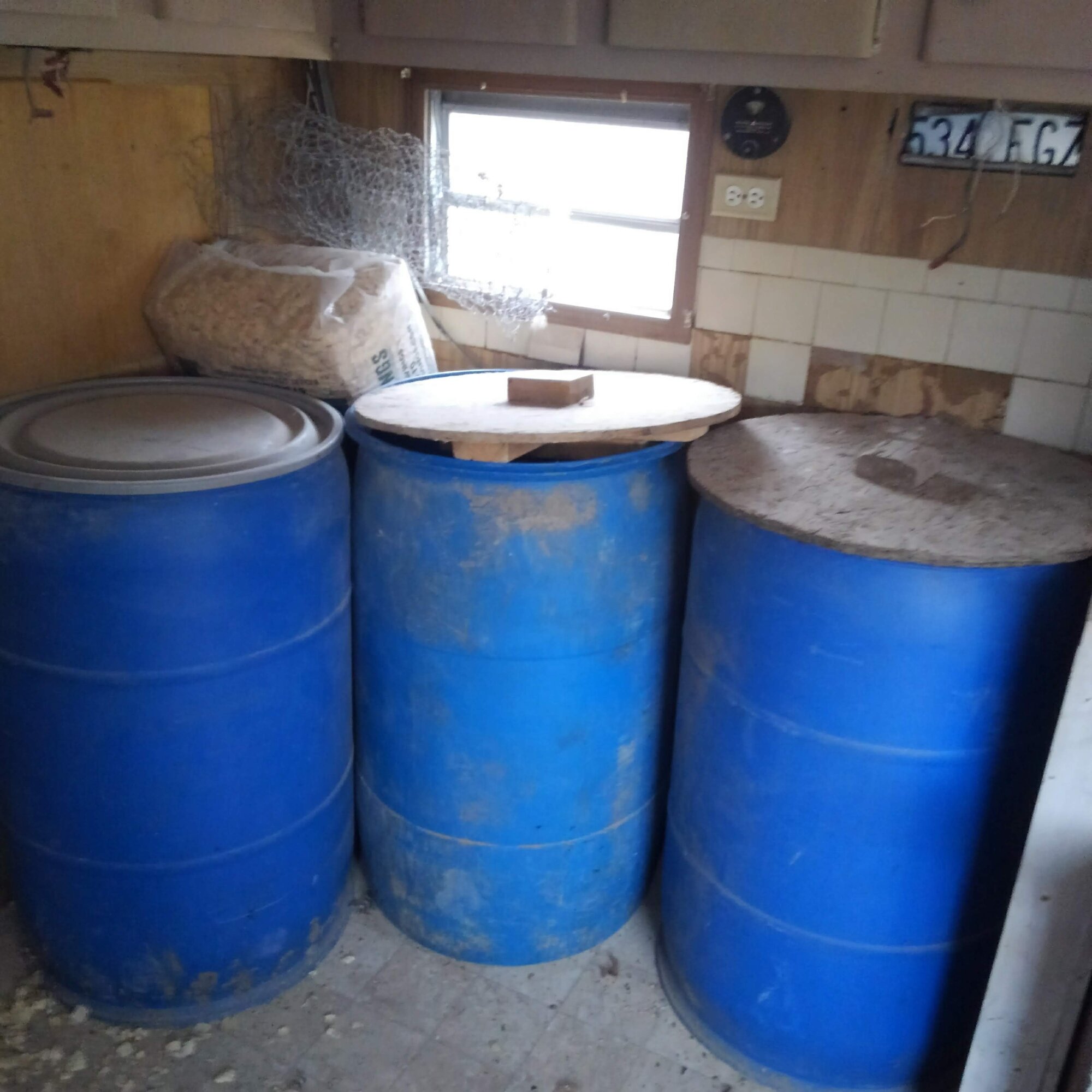 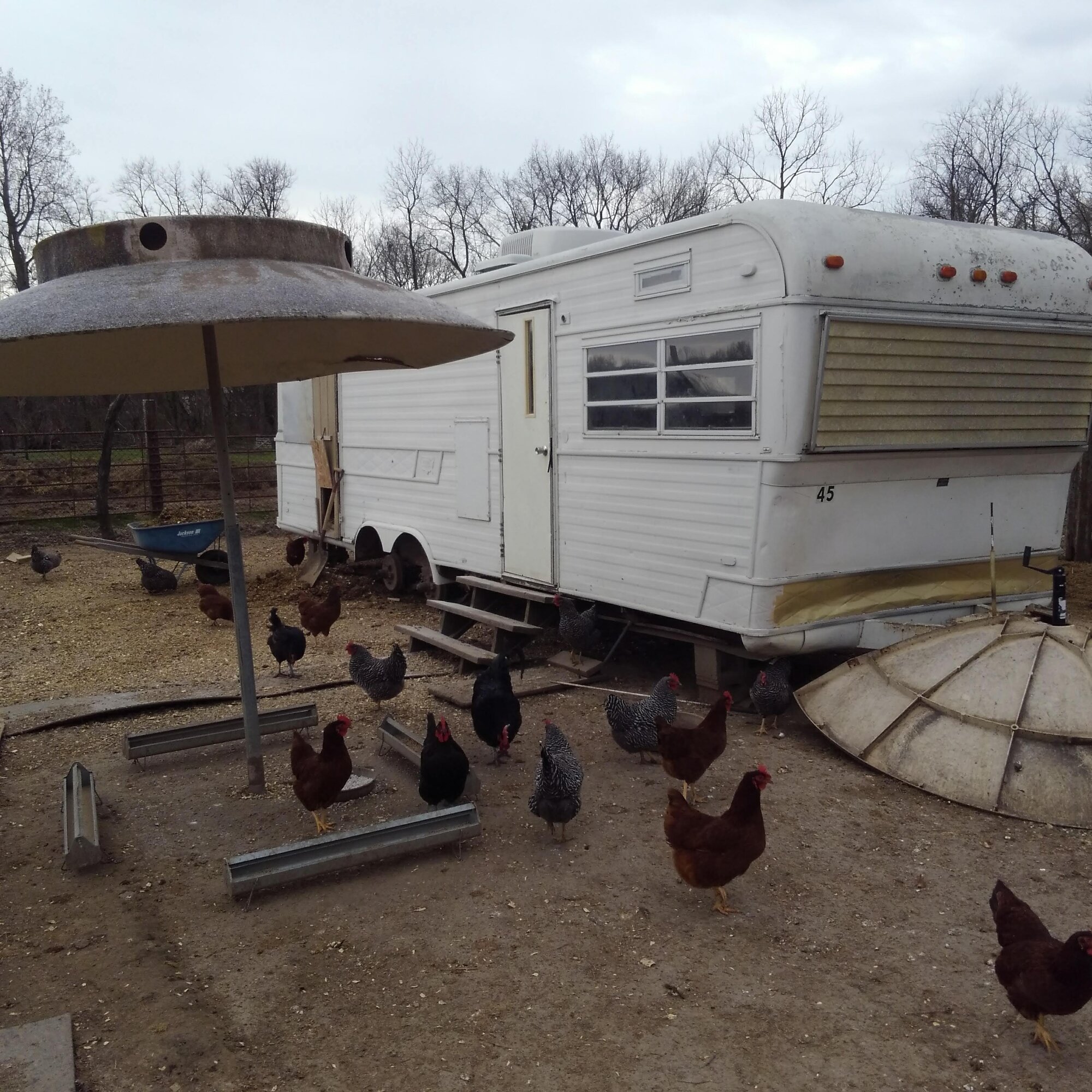 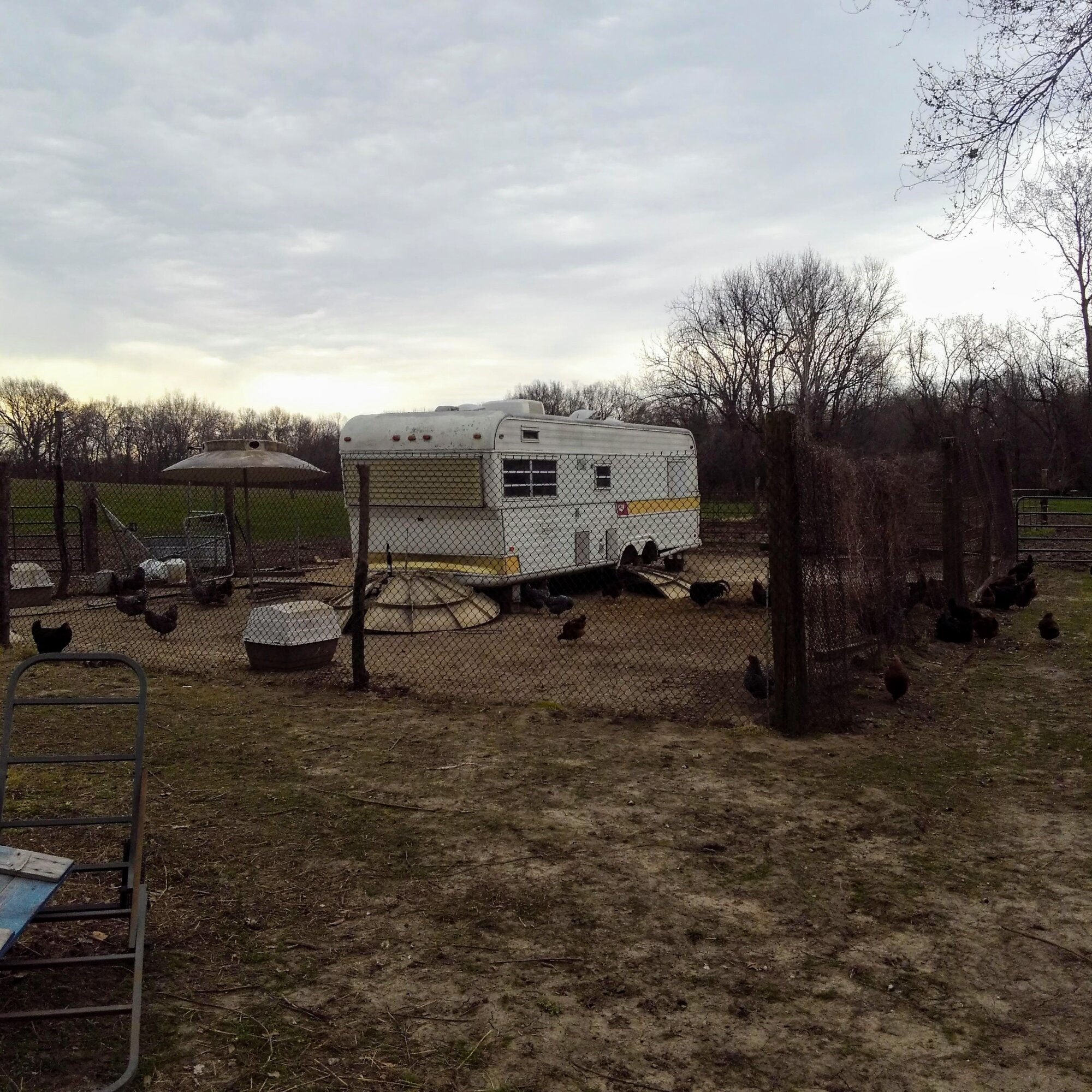 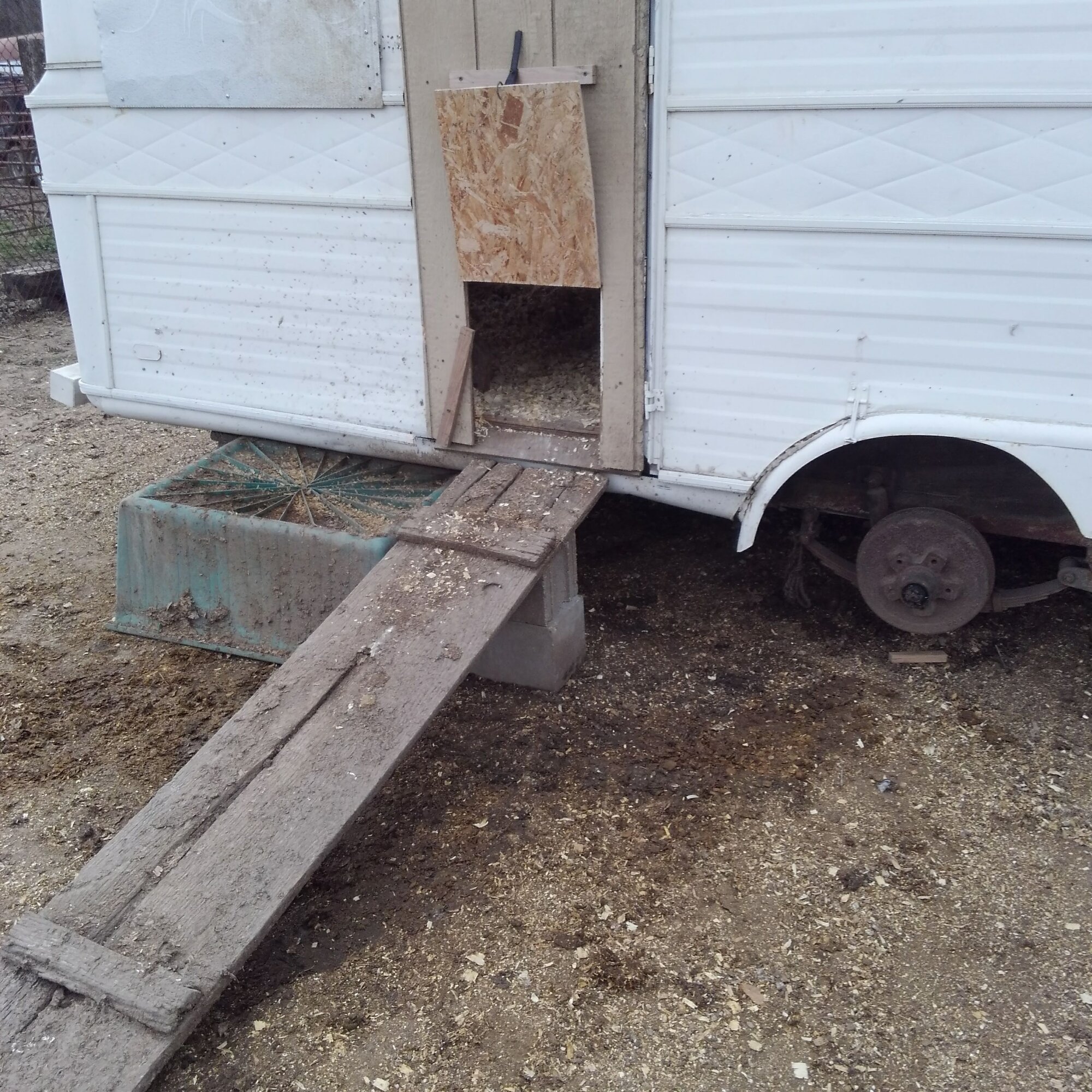 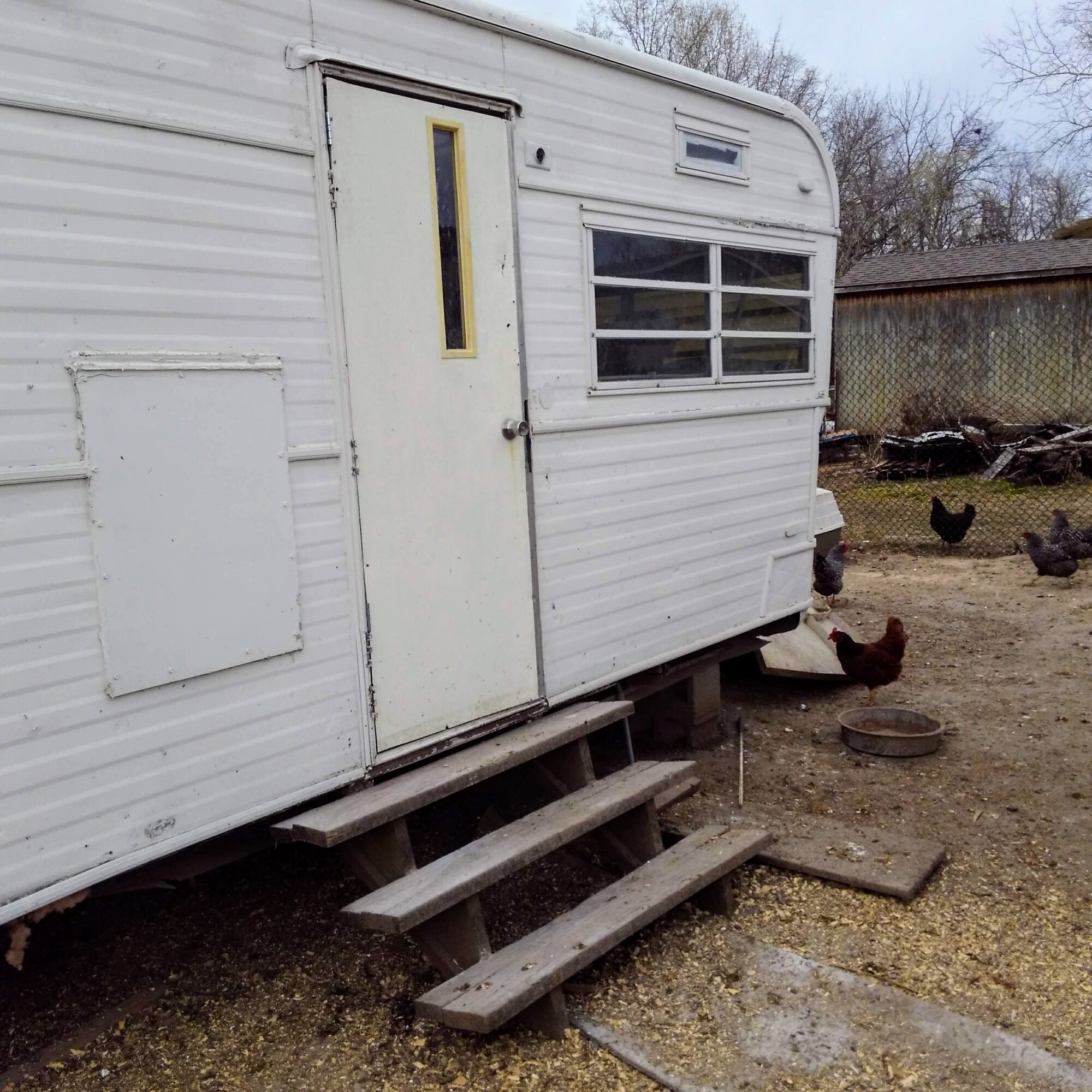 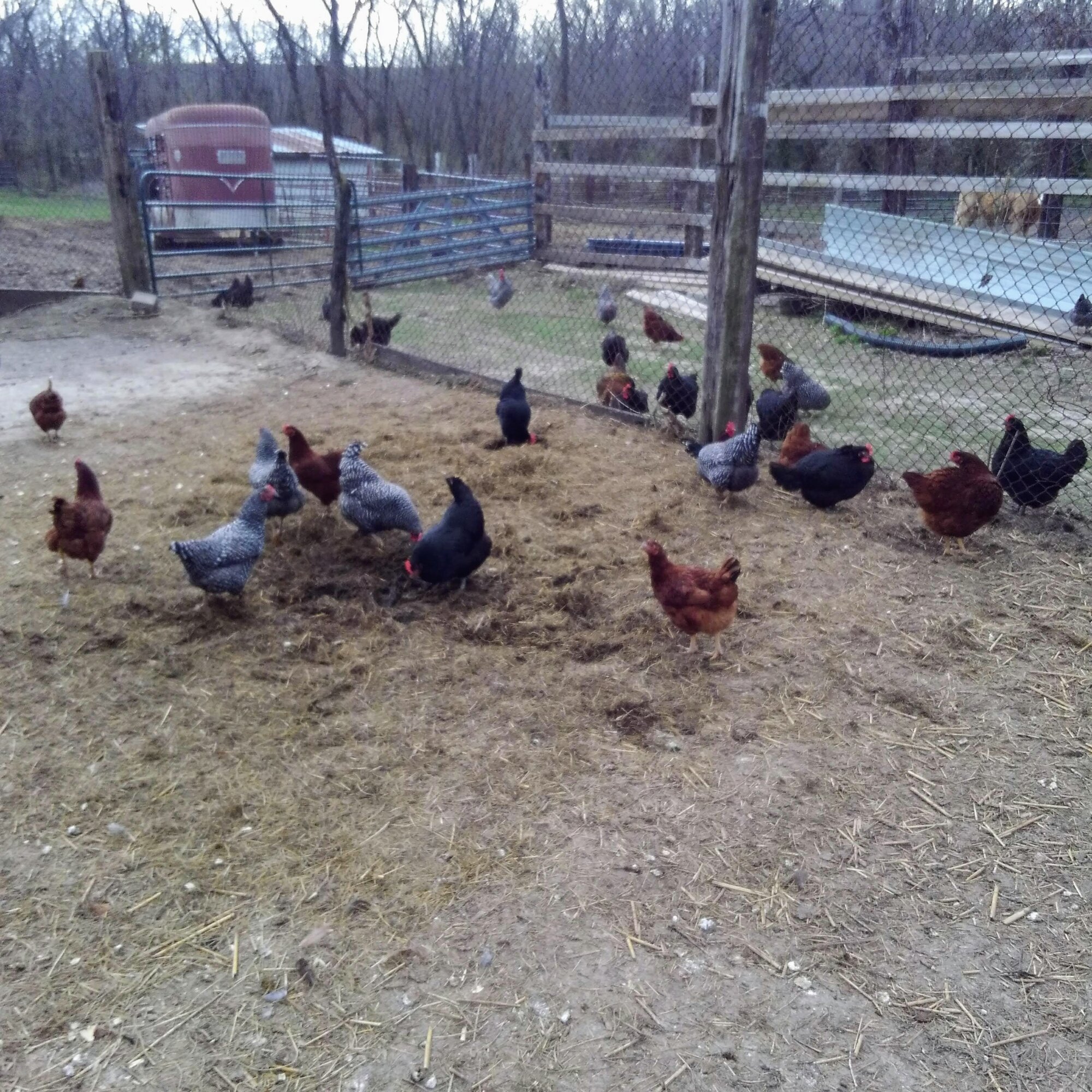 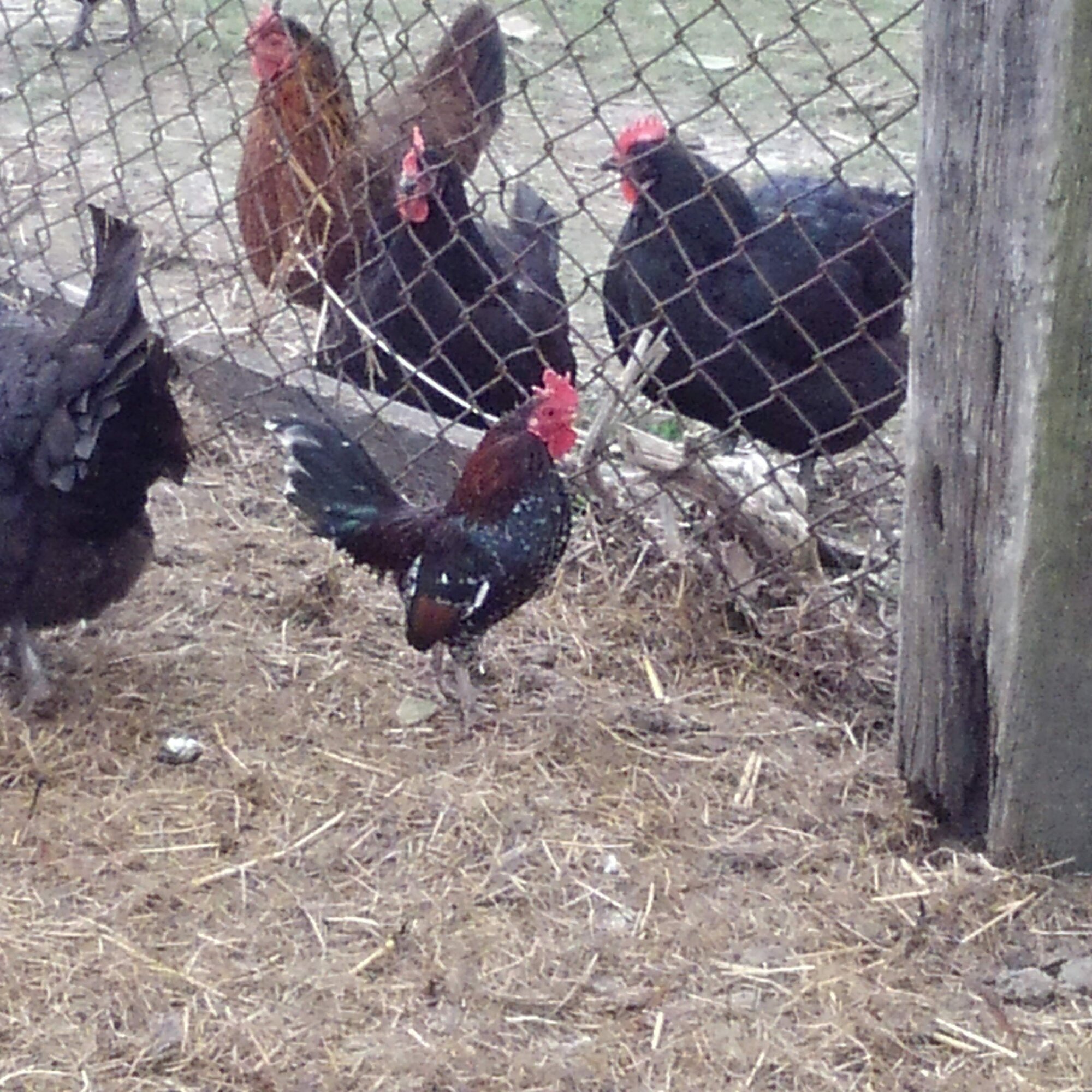 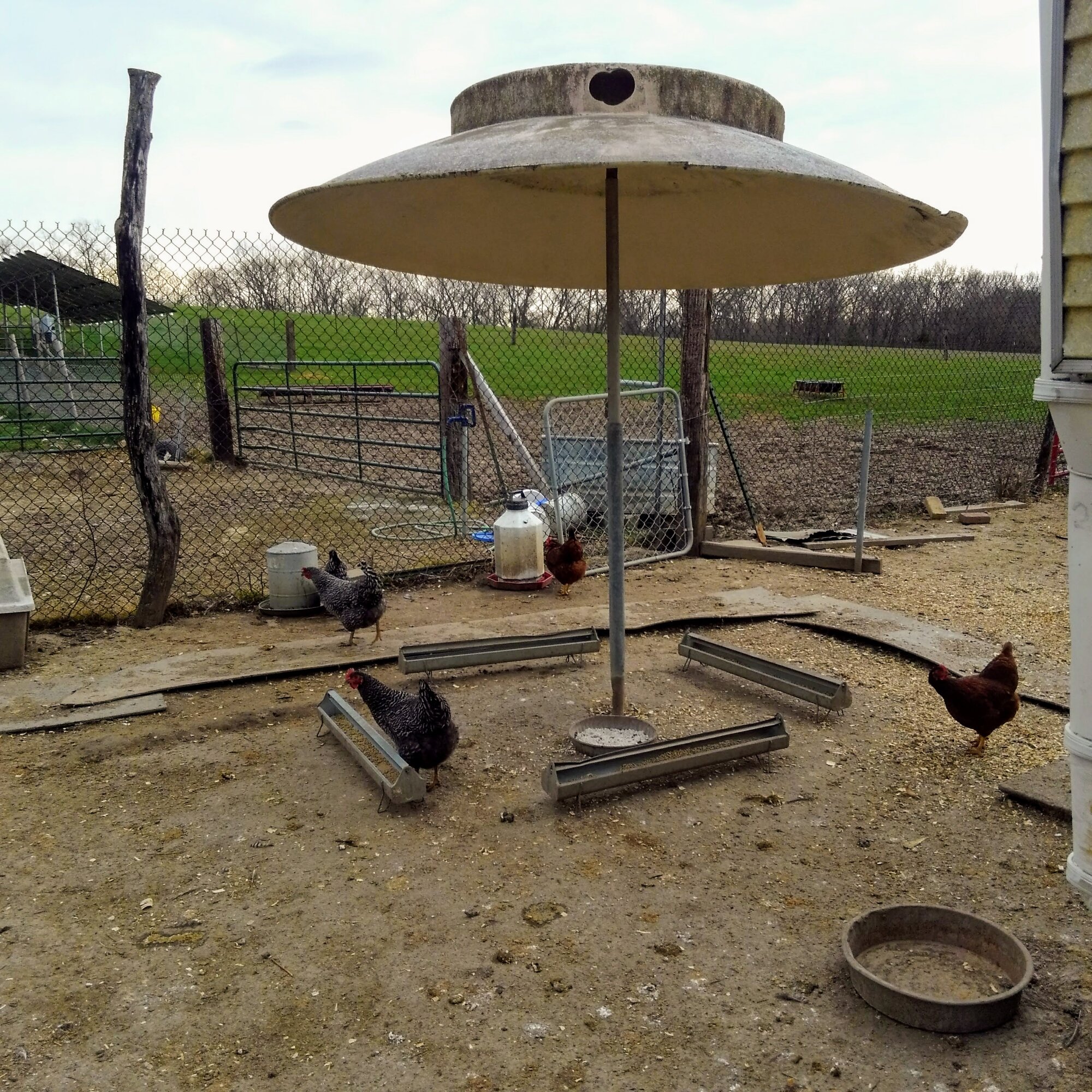 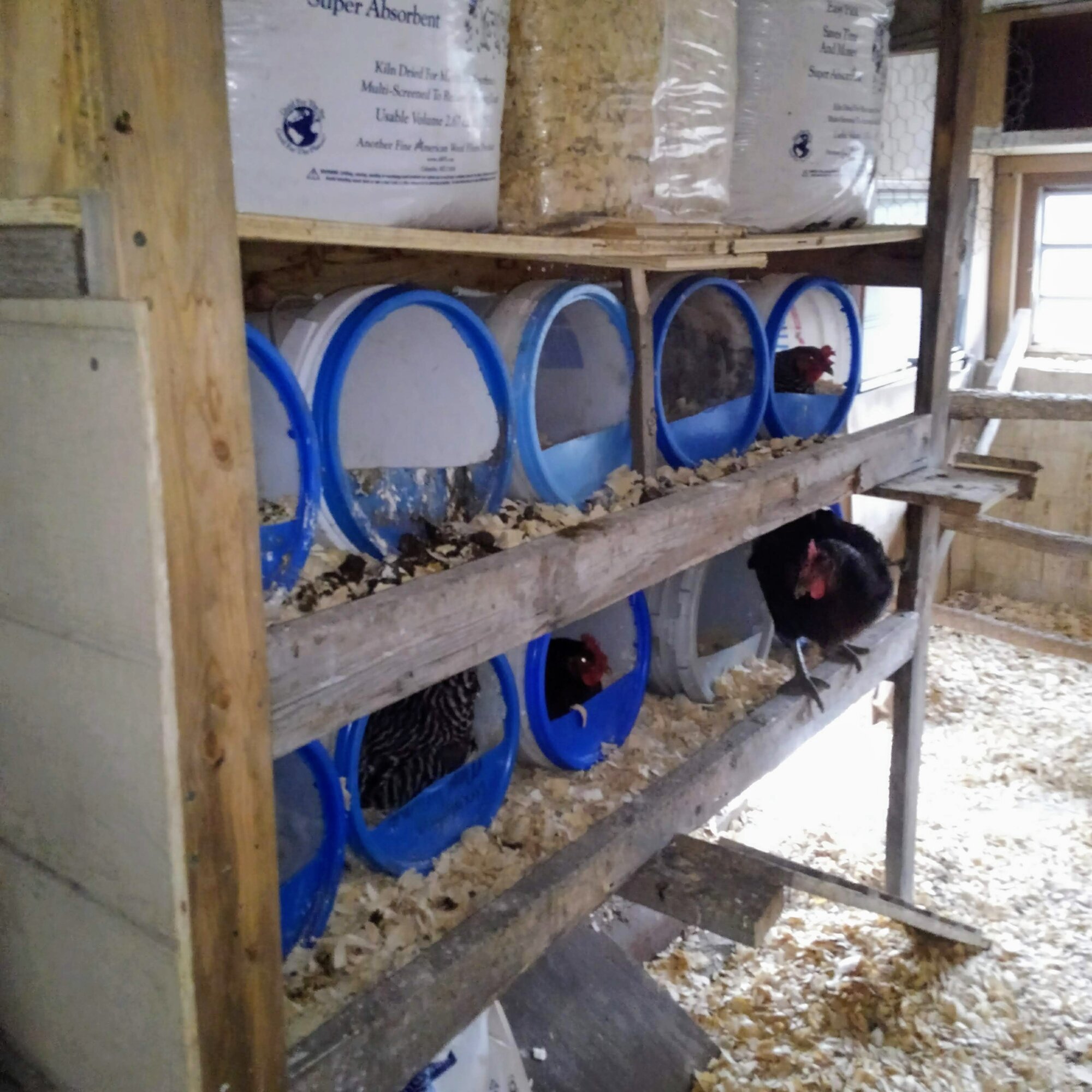 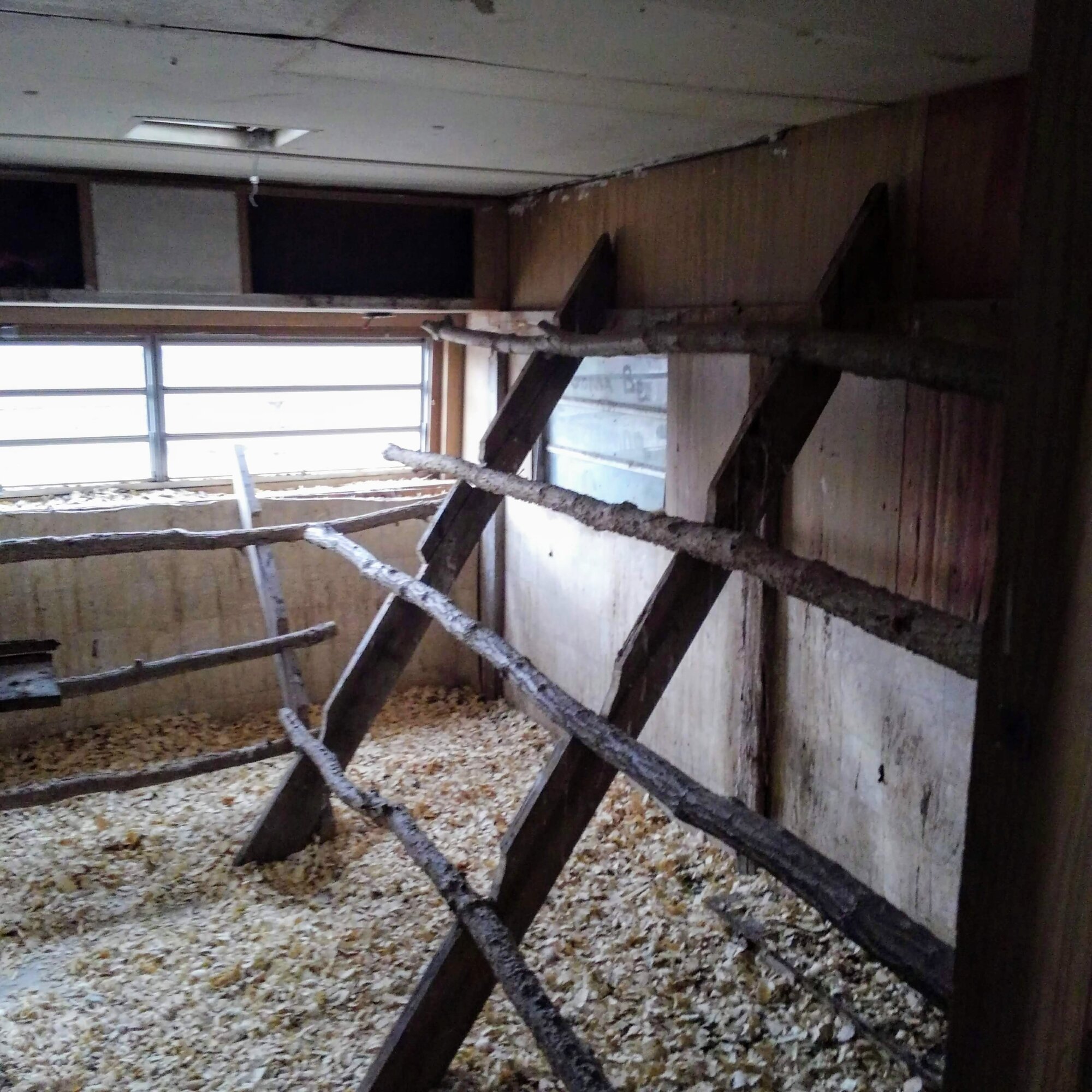 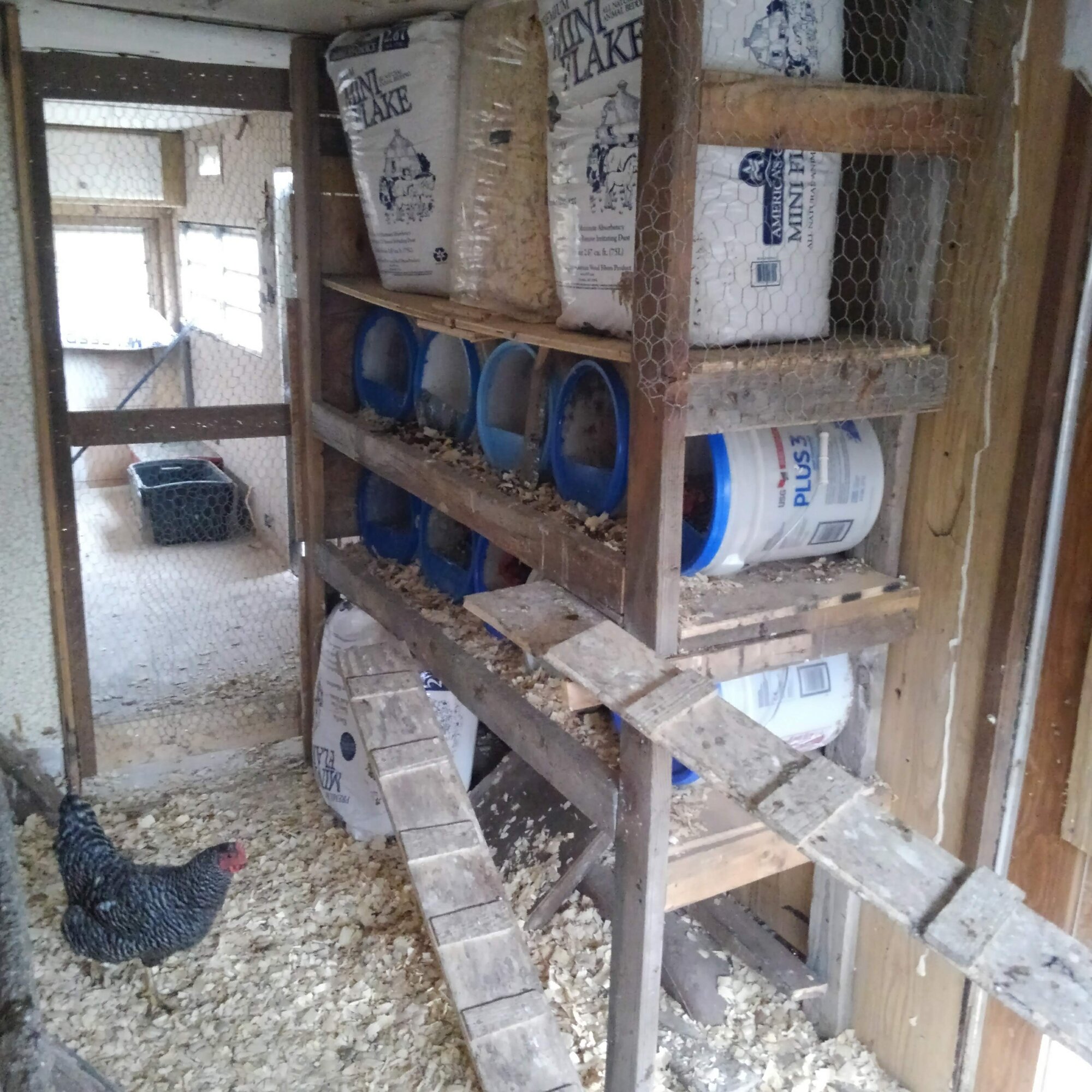 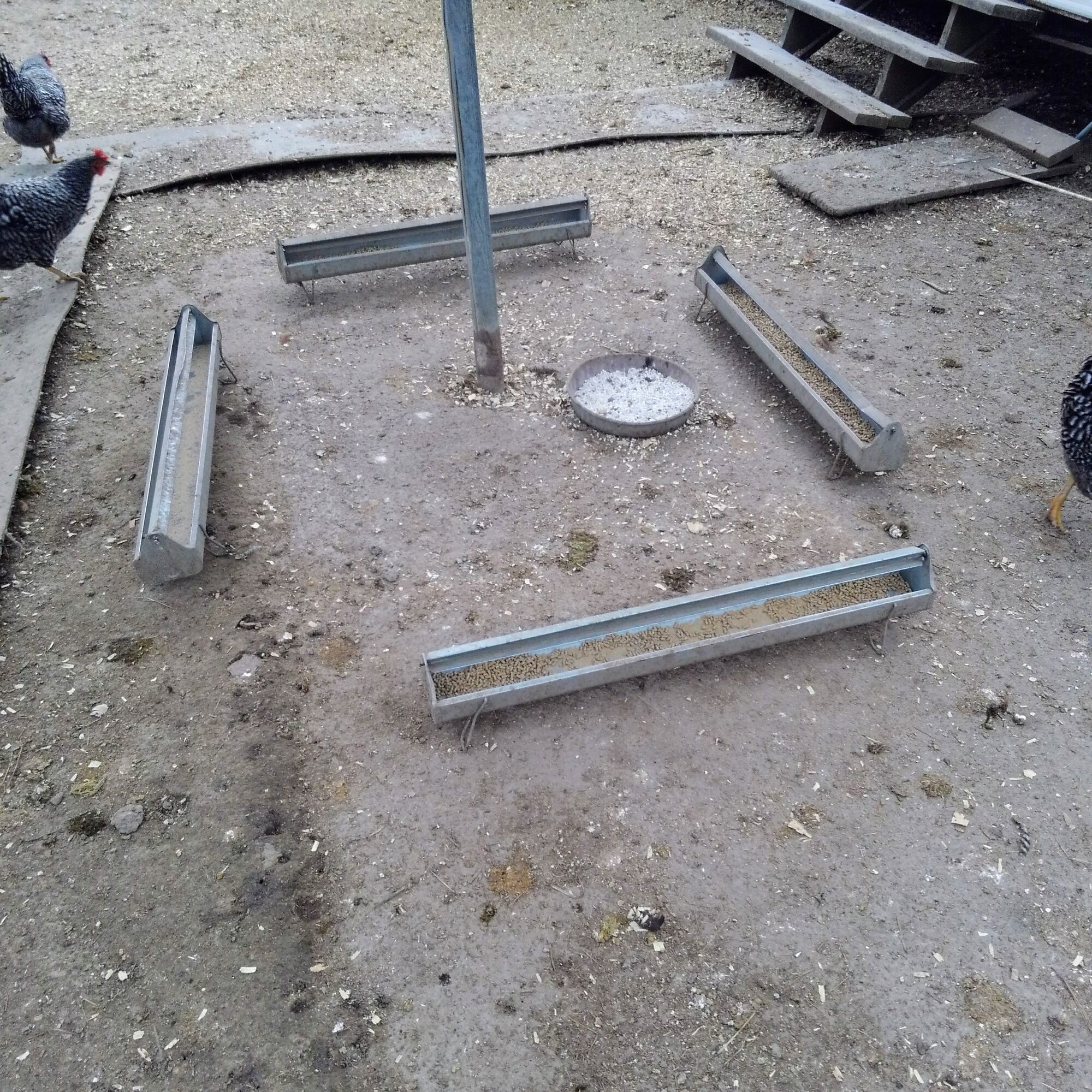 Nice job! You made an awesome coop. That is a wonderful old trailer, I’m thinking a 1969 Holiday Rambler? Love the repurposing of the satellite dishes too. If I wasn’t in Oregon I’d offer to buy the old rock guard for my 1960’s Boles Aero. Thank you for sharing this, you made my day.
BTW, I just picked up 3 bales of industrial hemp bedding ( no CBD/THC) for my coop interior (inside only because unfortunately it’s so absorbent that it would practically melt under direct rain in a run) and the man I bought it from showed me his coop where he’s had the same batch of hemp bedding in his coop for 25 month’s! He’s never had to clean it out of the coop because it’s not saturated, no stink, not dirty at all. He does occasionally add a bit more on top like a deep litter method, but there’s NO dust, nothing bad at all. It’s more money up front but if you aren’t changing it all the time I think it’ll be cheaper in the long run. The main reason I bought it tho was the NO DUST part, I’m kinda sensitive to dust and think (and hope) that it’s the answer for me at least. Oh yes, he had it in both his brooder (no dirty dried poop on chickie feet), and in his nest boxes, perfectly clean eggs (if you don’t have roll away nest boxes, which I will have).
I really like what you did with the coop and run. We’ll be using cyclone/chain link as our outer perimeter fence as well, really like that as a base to predator proof from. I’ve looked at netting too, will probably add that to certain areas later as well. Great job and thanks for sharing!

Very cool!! I was after one of these but couldn't find one cheap that was in decent shape so I built my own on a trailer instead.

I like chains (from the ceiling, or from a high object) and metal clips--raise or lower by clipping into a different link of the chain. (This works when hanging a heat lamp by the loop on top, not with the clamp that some have.)

Camper or Shed for our next coop?
2 3